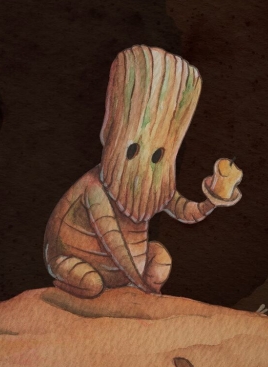 It seems odd to start out by talking about the file size of a game of all things, but I was honestly shocked to see that Daedalic Entertainment’s new game Candle required over ten gigabytes of free space to install. Sure, it’s a platforming adventure with a heavy emphasis on elaborate visuals, but even some of the most visually-stunning indie games I have only take up half of that at most. And considering that I was starting to become cautious of just how much free space was left on my PC, I said “Candle, this detailed journey involving watercolor visuals and puzzle-solving had better be worth all this space.”

You got lucky, Candle.

Candle gives us the tale of Teku, a young masked man whose job is to use the candle on their hand as a means of bringing light to others. They are the apprentice of their tribe’s shaman, and when the devil-like Wakcha tribe set their village ablaze and kidnap the shaman, Teku sets out to rescue them. It is indeed a simple setup, but the story as a whole is presented quite beautifully, with some terrific and memorable characters and world-building, including hints to a past consisting of previous destroyed worlds, as told via old legends. It’s one of those instances where everything feels like a sort of modern fairy tale, right down to simpler moments like reuniting a mother beast with their child, and it creates an overall narrative that can easily get you hooked and wanting to see where it all leads in the end.

That said, tough, the story is harmed slightly by the means of telling it. See, you can have adventures that present their tales through made-up languages and/or symbols in dialogue balloons (like in Machinarium), or you can have a powerful narrator describe key events (like in Bastion), but combining the two like Candle does results in more than a few redundancies at times. After rescuing one of the shaman’s bodyguards from a tree above a toxic pit, he talked with Teku in their Simlish-style speech while cave painting-styled drawings appeared above their head, showing how he was captured, but escaped, then stumbled in his haste and found himself trapped. Then after the bodyguard finished, a voice chimed in saying “The shaman’s bodyguard told Teku how he had escaped, only to become stuck in a precarious situation.” Um, thanks, Mr. Narrator, but I kind of already got the gist of that just seconds ago. Not that some moments couldn’t use a little clarification, but this just felt silly. 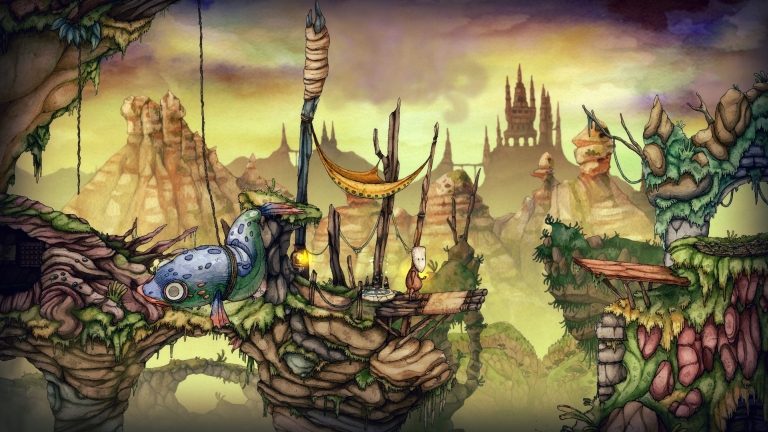 In the area of gameplay, Candle is a 2D platformer with puzzle, action, and even stealth segments that plays out in the same vein as titles such as Another World or Flashback, the classic and elaborate rotoscoped games of old. Unfortunately, it also brought along one of the flaws from such games, in that the actual platforming and climbing can feel a bit awkward at times, or at least takes some getting used to. You will also wish that Teku could speed up a lot more in certain areas, especially those with enemies lurking about, but thankfully you are given a run button. It is also highly recommended that you play with a controller, as using the keyboard for various interactions is a bit murky, but overall it still controls well once you get the swing of things, as mentioned.

Structure-wise, each act in Candle takes Teku to a new land with several interconnecting areas, which you have to naturally unlock through various means. The unifying feature in each area is that Teku will need their candle and its valuable light and flame to proceed in one way or another. However, this is not an eternal flame, so you need to search for a source of fire in each beginning, then use that and your newfound spark to light various altars along the way, which can provide a source of fire when needed. See, you will need to snuff out the candle at certain times, such as making sure you don’t get detected by enemies, or having to make it past a batch of angry bees, or even just through uncontrollable circumstances like facing a perpetual downpour or having to take a swim. So there are several moments where proper analysis and preparation are required, which makes for a fun challenge. You also have the ability to let off a flash with the flame that lights things up not only just to get past a few obstacles, but also uncover a secret or two, which is a nice extra touch. 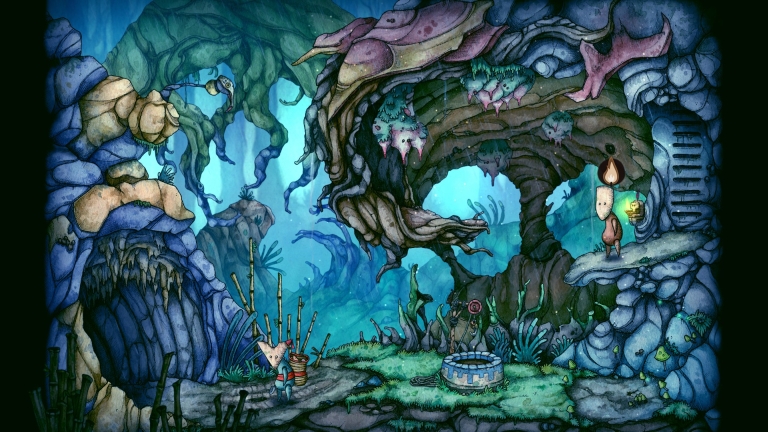 The various puzzles are an obvious highlight of Candle, and for good reason. They are indeed quite difficult at times (the fact that there are at least half a dozen achievements for dying in certain ways should be an indicator of that), but in the good way, the one where after you finally figure out the solution, you look back at everything and reflect on how it all made sense and tied together nicely. There’s also a great amount of variety in them, ranging from the likes of sliding tile puzzles that serve as locks, to inventory puzzles such as combining different leaves together to form certain kinds of smoke, and aforementioned stealth bits, where you take out Wakcha guards silently through unique means (one involving a pressure plate and a dart was especially well-done, in my opinion). And all of them require that you pay careful attention to everything, as the various carvings and details throughout all areas you pass serve as hints concerning what to do next. Granted, this does lead to a few hidden platforms and areas where the tell that you can access them really requires your attention, but overall the puzzles are still incredibly well-crafted.

Of course, it isn’t exactly a surprise that you’ll being paying attention to everything around you, because holy crap, is Candle gorgeous. The watercolor visuals are indeed an absolute delight, spiking each area with bursts of color everywhere and providing an immense amount of detail, but the South American aesthetics are the real star here. The various masked inhabitants, the tribal architecture, the variety of creatures, the various paintings, the lush jungles…it is all just oh so beautiful, with the sketch-like yet refined animations of each character being the cherry on top. And it all blends in with a fantasy setting to create these bizarre landscapes and worlds that you won’t be forgetting anytime soon, which are also filled with some stunning music that appropriately fits the international, ancient feel to boot. 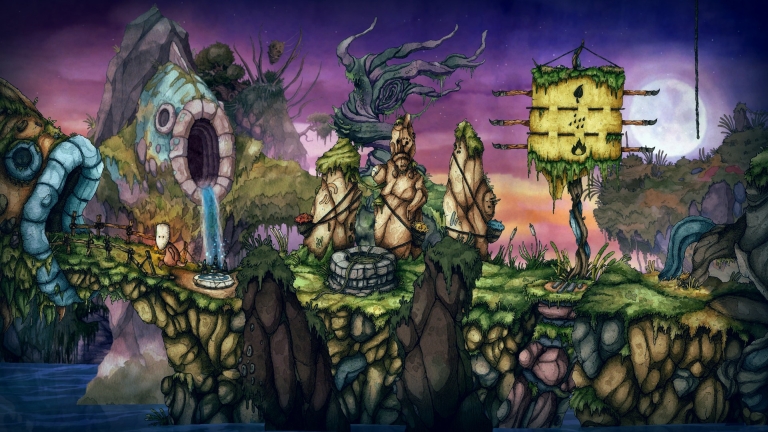 Developers Teku Studios clearly poured a lot of love and effort into Candle and it shows. From the breathtaking scenery and artwork to the terrific puzzle designs and unique worlds to discover and characters to interact with, Teku’s journey is easily one that deserves to have a light shone on it as well, as a showcase of a terrific platformer and adventure game. There are indeed a few hiccups and some moments of frustration (seriously, a controller is a must), but overall, this watercolor world crafts a painting of a terrific voyage and quite a near-masterpiece indeed.