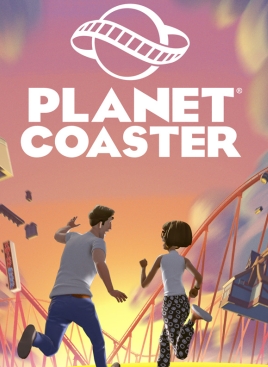 I still remember the original feeling glee gamers had when the first RollerCoaster Tycoon game came out in 1999. Sure, we had Theme Park before then, but this took things to the next level, allowing you to craft your own coasters and manage your park in even greater detail. It was intense, but we all had ideas on how it everything could still be improved, like being able to ride the coasters we built. And as various sequels and theme park simulators have come and gone over the years, things became more advanced, and our ideas became a reality in various ways. So know that we’ve been given such a large amount of features to work with, how do you create the next level in amusement park simulators such as these?

The answer? You just create the most entertaining simulator you can think of. And in that regard, Frontier Developments’ Planet Coaster is pretty much a success.

Immediately after beginning the game, you’re told to customize your avatar, place it on a globe to indicate your headquarters, then jump straight into the swing of things…and right off the bat, this leads one to address what felt like a pretty major flaw with Planet Coaster, and that is the lack of even a basic tutorial. Not even one explaining how the controls work. Instead, the tutorial link on the main screen actually leads out of the game and to the game’s official YouTube page, consisting of a set of tutorial videos. And as someone who’s already a bit peeved by the decreasing amount of written walkthroughs and FAQs in favor of fifteen-minute videos that I have to wade through instead of simply hitting Ctrl-F, that did irk me a bit, although it arguably is just a minor gripe to others at best.

Thankfully, the game’s controls are easy to figure out, and simple to use. Being able to rotate and place buildings and rides is quite simple, as is clicking on each guest and structure to view their statistics. The interface is also easy to navigate, allowing you to check up on your park’s various stats or browse various bits of scenery for purchase quite easily. The simulation aspects are simple, yet effective. Make sure to keep janitors hired to take care of overflowing trash bins, check each customer’s needs (with each one having their own unique appearance and name) and see what you can do for them or what kinds of facilities you can use more of, pay for research into new ride ideas and marketing strategies to attract certain demographics, et cetera. Even the act of creating your own coaster is easy to figure out, but the real challenge is in making sure it’s attractive to your customers (and I don’t care if the one I made has an 8 out of 10 fear rating that scares away crowds, I stand by my baby, dammit). 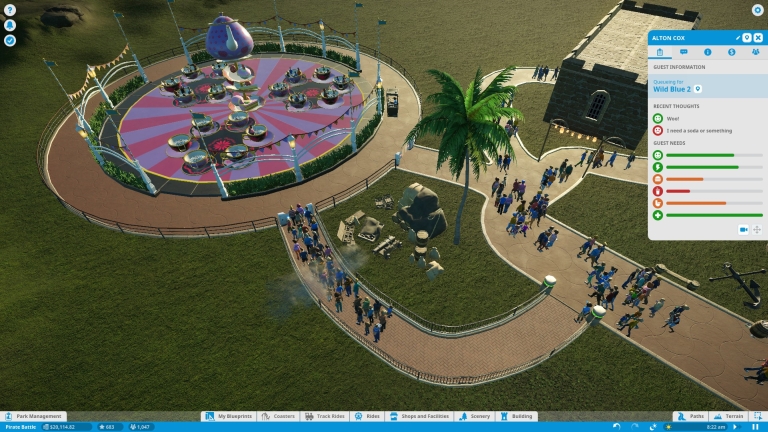 In terms of gameplay modes, you have your Career, Sandbox, and Challenge options. Career Mode is pretty standard, where you have various pre-built parks to work with that you can build on and alter, attempting to earn bronze, silver, and gold stars through various goals such as building a set number of rides, attracting a certain amount of customers, bringing up the scenery level to a particular amount, and others. Not exactly that deep, but shooting for the gold star is indeed highly enjoyable, and can be a bit challenging indeed. But we all now Sandbox Mode is the big draw here for those who’ve always dreamed of being the architects of their own parks (or Challenge for those who want to try doing so with a set amount of money, unlocking more rides and attractions as you progress), and it is quite a blast indeed to just go nuts and work on building the craziest stuff you can. The only annoyance in that after building rides, you have to properly test them out before you open them, which you can’t do when the game is paused, and keeping the park open while you’re still in the planning stage is a bit silly.

Thankfully, that restriction does not apply to shops and buildings, and taking the time to customize them is an area where Planet Coaster really shines. You can just use themed shops with existing blueprints and plunk them down instantly, yes, but you can also just plop down a plain building and then scour the game’s scenery and structure for roofs to add, signs to attach, extra structures to expand it, and so much more. Would you like to decorate your milkshake stand with animatronic aliens standing on top of it and firing guns? Why the heck not! Whatever you feel makes it look as best as possible and/or draws tourists in. You honestly may not believe how engrossing building a novelty hat store can be, but you’ll see. 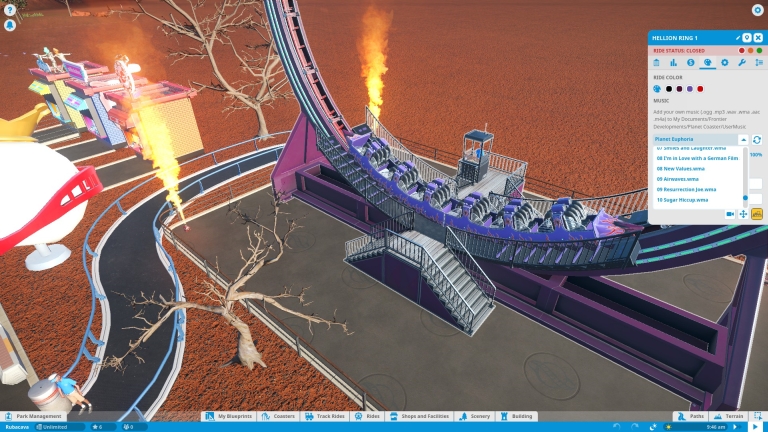 The customization levels for rides are a bit more limited, but also welcome. You are naturally free to build your own coaster and surround with whatever scenery you’d like for a potential theme, but when it comes to the thrill rides, you’re stuck with whatever pre-set theme they have. So when given a particular genie-themed ride for a fantasy theme park, I’m left wondering why you can’t just swap out the magic lamp for, say, a UFO to have it fit in to a sci-fi park. Just saying, it would be incredibly fun to choose the theme in these cases. Thankfully, this is made up for in another area of customization, namely in that aside from being able to pick the colors out for your rides, you can also choose what music plays whenever its in motion…even extending to your own music files that you can actually import into the game. So needless to say, I busted out my post-punk compilation CDs and was able have my theme park playing the likes of Killing Joke and Medium Medium all day long. In essence, it means you can have Planet Coaster set to the soundtrack of your liking, meaning you too can finally get to work on that Metallica theme park you’ve always wanted. One that I’m guessing can’t be shared with other players, but you can have it nonetheless.

Speaking of that last part, one of Planet Coaster’s particular innovations is deciding to integrate more social features and sharing. Players are encouraged to craft their own blueprints for buildings, coasters, and parks, and through the main hub, you can view recommendations from the Steam Workshop, crafted by top players and experts (or just browse all players in general), and bring them into your game. It’s a nifty idea designed to integrate things more directly, to say the least, but it does mean the shelf life of Planet Coaster will be a bit dependent on how willing players are to craft their own unique structures and park designs, and just how many of them will upload these new creations on a regular basis.

That being said, the customization is still one of the game’s most enjoyable aspects, and is easily why it kept me hooked for hours on end. See, Planet Coaster is designed in such a way that whether you want to go as deep as possible and manage every single detail of every fast food joint, soundtrack, and loop-the-loop, whether you want to just play around with the basics and enjoy a simple theme park simulator, or whether you want something in between, the experience will definitely be just as fun either way. It is indeed a game that’s enjoyable on several different levels, even for those who want a challenge or those who just want to mess around. So it basically has something for every kind of player, and that definitely makes for a highly engrossing simulator overall. 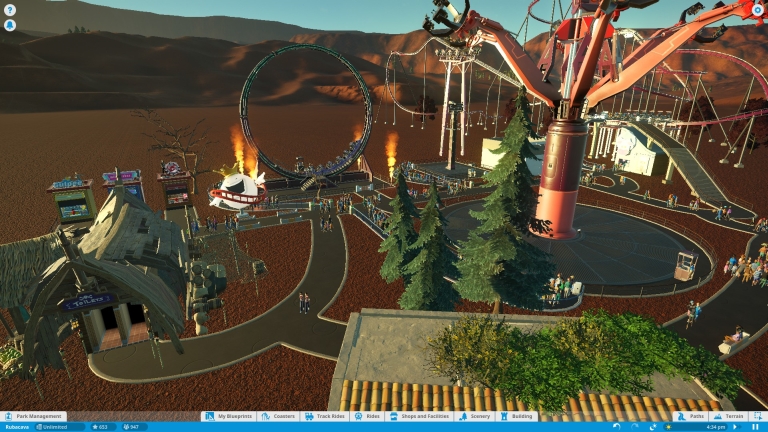 Planet Coaster clearly has aspirations of expanding itself through a larger base of players, embracing user-created content to the fullest and allowing players to show off their various parks to each other. But even as is, it’s a highly addictive and incredibly fun game, even for those who choose not to break the mold. Everything is nicely vibrant and joyful, and the feeling of glee you get when you check the various cameras on your ride and see your little guests with mile-wide smiles on their faces is a treat indeed. Things actually could be even slightly deeper, but for now, Planet Coaster truly is one of the best virtual thrill rides you can check out and one you won’t get off of anytime soon.