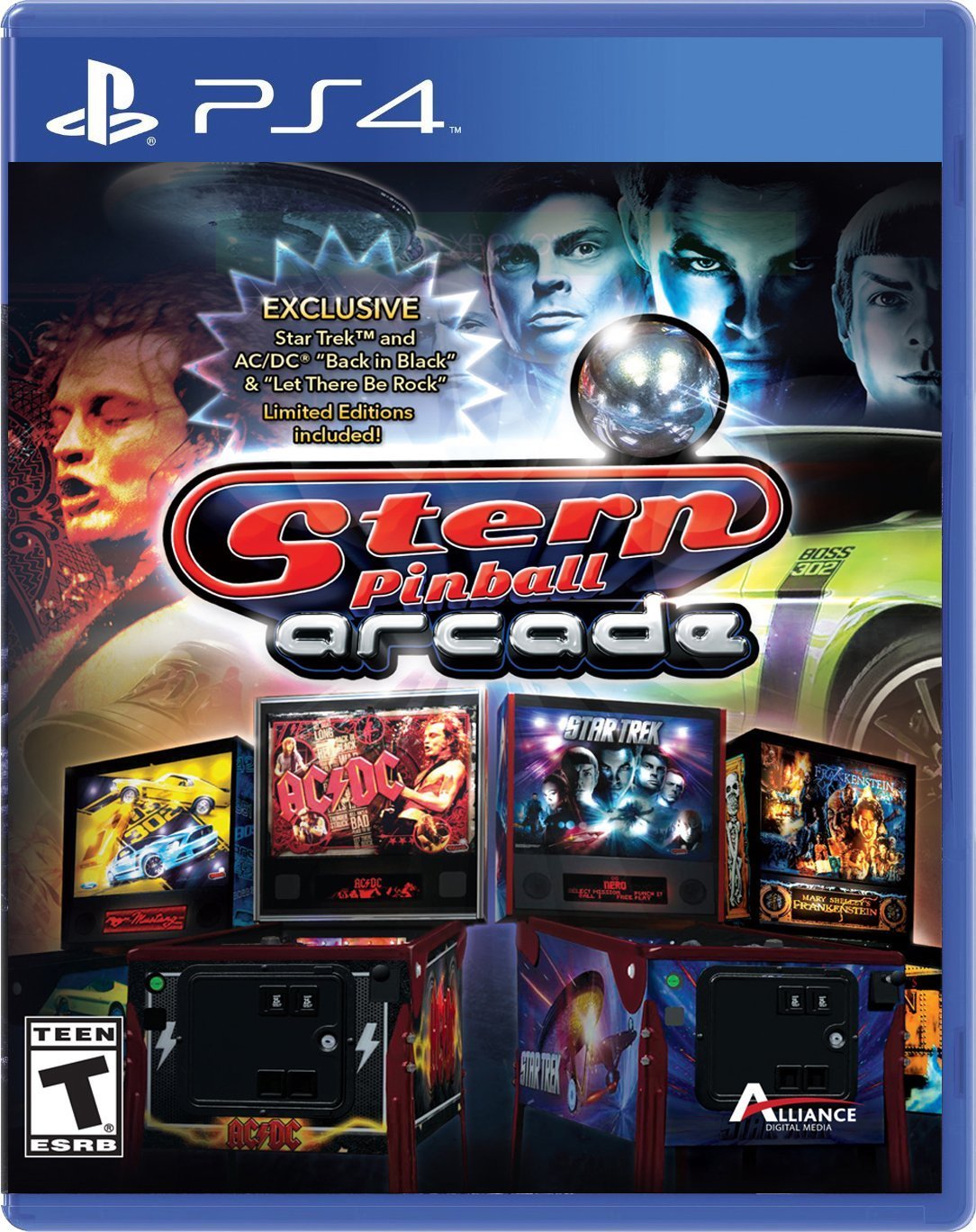 The Pinball Arcade has been pumping out digital versions of physical pinball for years, starting as Pinball Hall of Fame back on the PS2 and working its way through a few iterations until now we’ve got a massive digital collection that’s approaching it’s hundredth table.  During its time the process for recreating the machines has involved disassembling the real tables, taking high-resolution photographs of each part and component, and using that info to rebuild everything digitally.  After that it’s a matter of tuning the physics and releasing it to the world, with a little post-release bug-squashing that can take a variable amount of time.  The newest spinoff series changes the process in an attempt to create the most accurate representation possible, pulling the geometry straight from the 3D CAD files used for production and all art using print-quality graphics.  Stern Pinball Arcade is as real as the combined might of Stern and FarSight Studios can make it, featuring the best digital versions available of machines both old and new.

Before breaking things down too far, though, a disclaimer-  This review covers the free download of Stern Pinball Arcade, which includes Mary Shelley’s Frankenstein, plus Bundle Packs 1 and 2, for a total of ten tables.  Some of these have been available in The Pinball Arcade already while the remaining three are brand-new to digitization.  Odds are at least somewhat decent that maybe, if you’re a fan, you’ve already picked the reruns up in the other collection.  There are a lot of factors to consider on whether it’s worth double-dipping, including the VR support that isn’t part of this review, but if it’s all new to you then it’s worth going for the slightly superior versions in Stern Pinball Arcade.

Each table in the game is its own unique beast, with an individual rule-set and layout completely different from any other, barring the basics.  You’ve got the plunger on the left, flippers in the bottom-center, a couple of triangular bumpers above the flippers and lanes on either side of them guiding the ball down, and the rest could be pretty much anything.  One of the fantastic things about pinball is seeing how each new table takes all that free space and defines it by use of shots, ramps, targets, and colorful table toys that bring the theme to life.  What makes a table mechanically good is how the shots fit together, giving the player a decent chance at activating the different play modes by using either a little skill or a lot of perseverance.  Batting the ball around by mindlessly tapping both flippers at the same time, every time, can earn a nice light-show, but a skilled player should be able to string one shot to the another to send the score through the roof.  A good pinball will provide a nice challenge while subtly working with the player to provide the needed chance at making a necessary shot, but a great pinball will enhance that with an amazing theme, lights everywhere, and a dynamic layout.  The ten tables in Stern Pinball Arcade range from decent to absolutely fantastic, so here’s the list in order of personal preference, starting at the bottom- 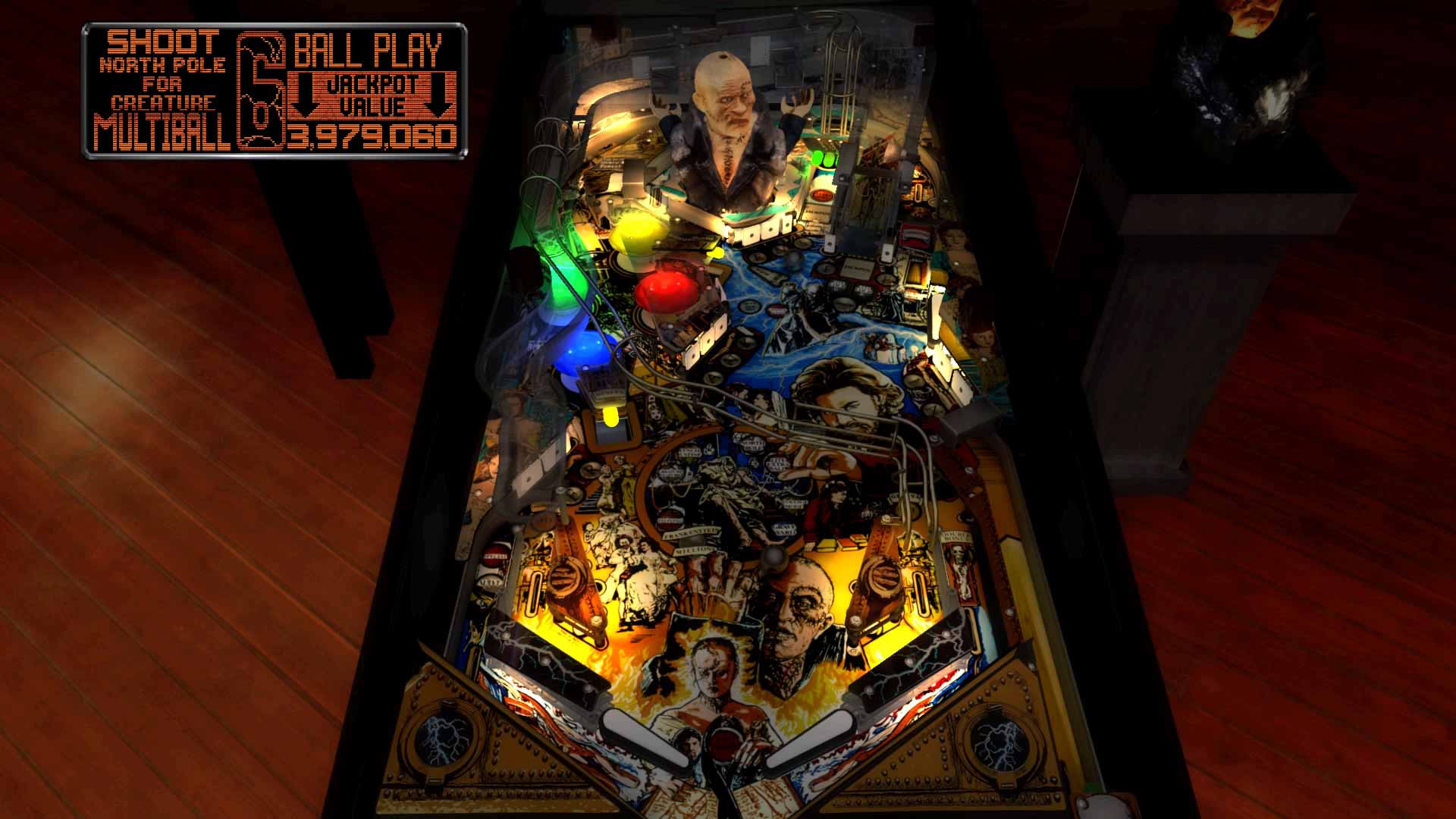 High Roller Casino is a gambling-themed table that’s the weakest of the lot.  The opening shot goes to a roulette wheel that looks great but takes forever for the ball to drop through, and while the casino has plenty of games to play, including a slot machine and a variety of card shots, the hokey announcer is grating.  It’s a colorful table, but too many shots stall the action.

Harley Davidson: Third Edition does a nice job of being a decent pinball.  Most of its shots are straight up the board to the top through various ramps and lanes, with only a pair of four-target banks on the left and right side to liven up the center of the board.  The Harley at the top is fun to see, and the licensed music backs up the theme well, but it’s hard to get excited about this one.  It’s not bad by any stretch of the imagination but it always feels like it needs just something a little extra to become great.

Last Action Hero is a standard movie-licensed game, except this one had Arnie providing the voice clips.  It’s a crowd-pleaser, in that there’s a lot to see everywhere you look and it’s easy to make things happen just by batting the ball all over the place, and fun to hop into when you just want to light up a board.  The crane extending over the board is a great little table toy, and if the layout is a bit of a mess it’s at least an energetic one.

Mary Shelley’s Frankenstein, like Last Action Hero, is another crowd pleaser with a good number of flashy, easy shots.  The giant Frankenstein’s Monster in the middle of the board dominates the layout, and his hands reach back to grab the balls off the rail to hold them for multiball.  It’s a big, bright, beast of a machine, perfect for kicking back with when you just want to make things happen on a pinball table. 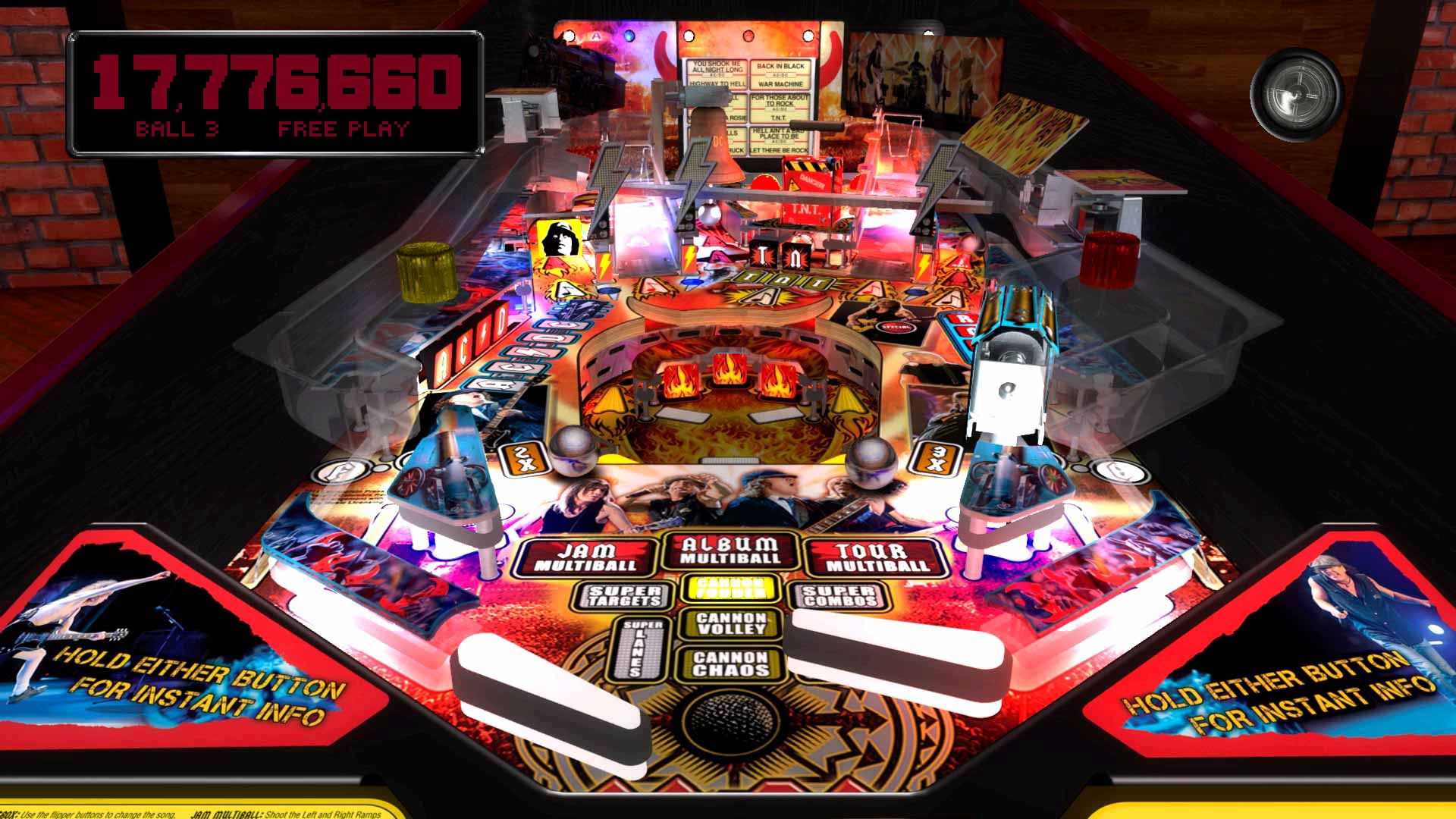 Ripley’s Believe It or Not is only down this far because I’ve played it to death in The Pinball Arcade, but it’s a great board with a ton of shots and game modes to chase after.  It’s got a squawking penguin, chatty shrunken head, ramps and lanes shooting every which way, and a good number of multiballs to chase after.  A novice can have a good time sending balls flying everywhere while a pinball pro has a huge quest ahead to master the various challenges.

Starship Troopers brings Paul Verhoeven’s satirical take on the Heinlein novel to pinball form and it’s a bit of a cult classic table. Just like the film, the pinball follows a series of bug encounters on a number of planets, and the table is dominated by colored lights and a giant insect toys. It’s most notable feature is a small red flipper on the right side that’s set up to perfectly send the ball into the queen’s tunnel, but it needs to be hit with a secondary flipper button. It throws an interesting kink into the table control.

Phantom of the Opera is the oldest board in the collection and a fantastic example of its time.  While the board may not be filled to the brim with shots in the way Frankenstein or Ripley’s is, it leaves the center open for a striking bit of art that defines the board.  The “organ” ramp in the back-right has three targets at the top that, when hit, cause the ramp to tilt back and reveal a passageway to the basement.  The music is more Phantom of the Synth-Noodling than Opera, but for the time it was amazing and even now fits the theme perfectly. 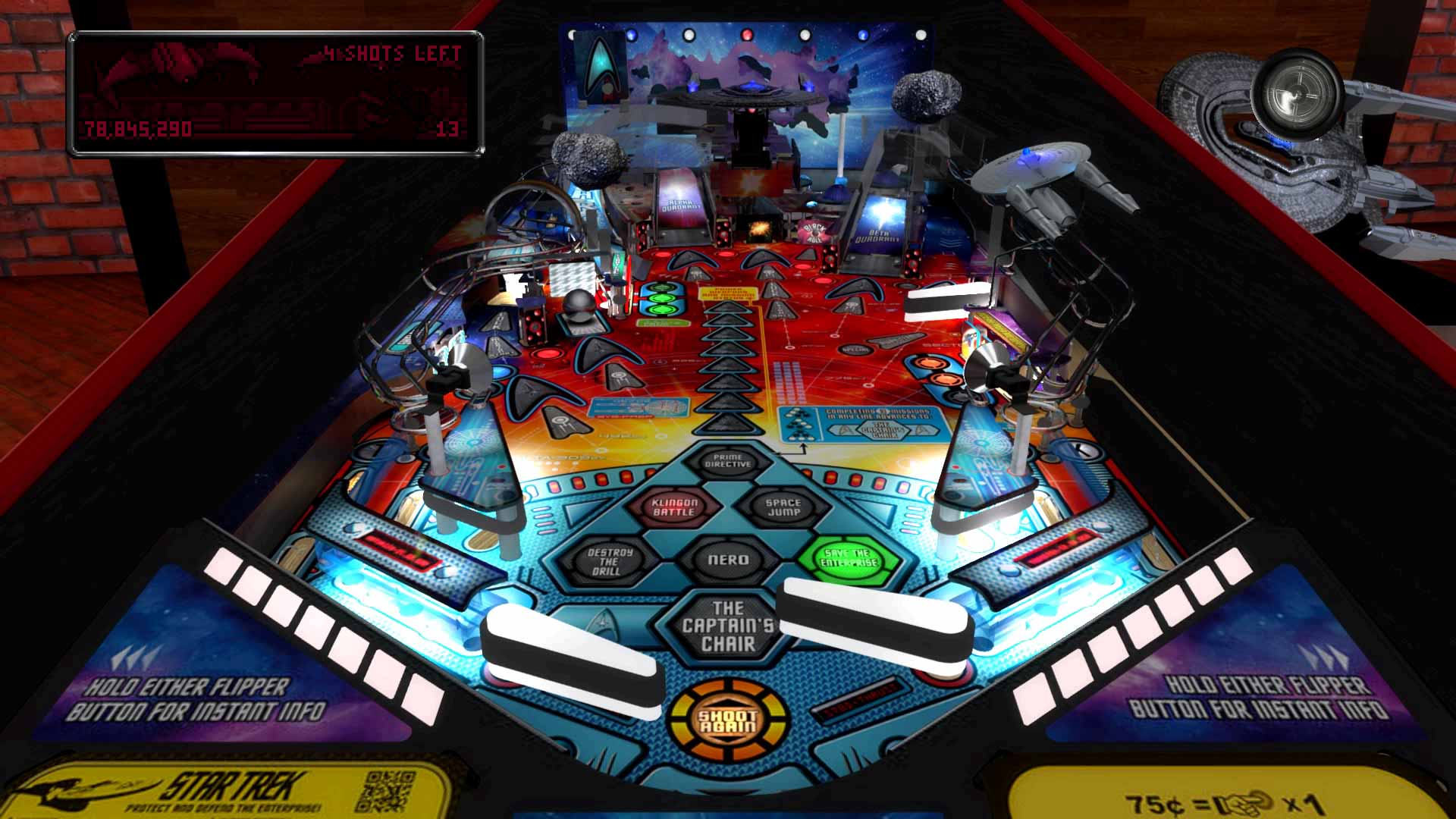 AC/DC features the Premium version of the table, with the big center space filled up by a portrait of Angus Young’s sneering face replaced by sunken secondary playfield. Each of the twelve game modes is a fully-licensed AC/DC song, displayed on a jukebox-style indicator at the back of the playfield. While the basic layout is fairly straightforward it’s packed with perfectly themed toys like the bell and cannon, and the AC/DC music keeps the action pumping along.

Star Trek Vengeance is one of the standout pinball tables from the last several years, and while its different primary gameplay modes can be summed up as “hit all the ramps” there are enough of them in different configurations that there’s always a new target to aim at. The secondary targets are arrayed in a good configuration around the main ones, making it tempting to pass up advancing the current scene to pursue a bonus goal or two. It’s not quite so satisfying on the virtual pinball to send a shot into the giant Enterprise-class ship Vengeance hovering over the center of the board, which in real life requires removing a hand from the flipper to smack a button in the center-front of the machine, but them’s the breaks with digital.

Ford Mustang takes the top spot mostly because its the first time I’ve played this one, so it’s got the advantage of not only being a great pinball but also shiny and new. The table is an open design that looks clean while still holding a good number of shots, and like Star Trek that are a good number of modes that take advantage of this.  Each mode has its own licensed music, too, and there’s no denying how much better pinball is when shooting to Ace of Spades.  The model of the Mustang on a rotating platform at the top of the board gets in the way of the lanes that add to the bonus multiplier, but looks cool enough that it’s worth configuring the view a bit to get it out of the way.

While Stern Pinball Arcade is a great collection of tables, it’s also still got some bugs to sort out.  Each table has a small handful of issues to attend to, whether that be missing or looped audio files, a ramp that clips through a piece of scenery, and a few lighting issues left over from launch.  When the game came out there was no room lighting or ball reflection, making for a very dark game as shown in every screenshot in this review.  For the most part it doesn’t look like this any more (and could really use new promo art to reflect that) but certain sections still need touching up such as Star Trek Vengeance’s center ship being too dark.  Thankfully most of the issues are cosmetic, not affecting gameplay, but it’s always a little weird when a line gets cut off halfway through by a random sound effect.  And it may be nitpicking, but the model car in Ford Mustang: Premium Boss Edition really should be red, as evidenced by the flyer for that version found directly on Stern’s web site. 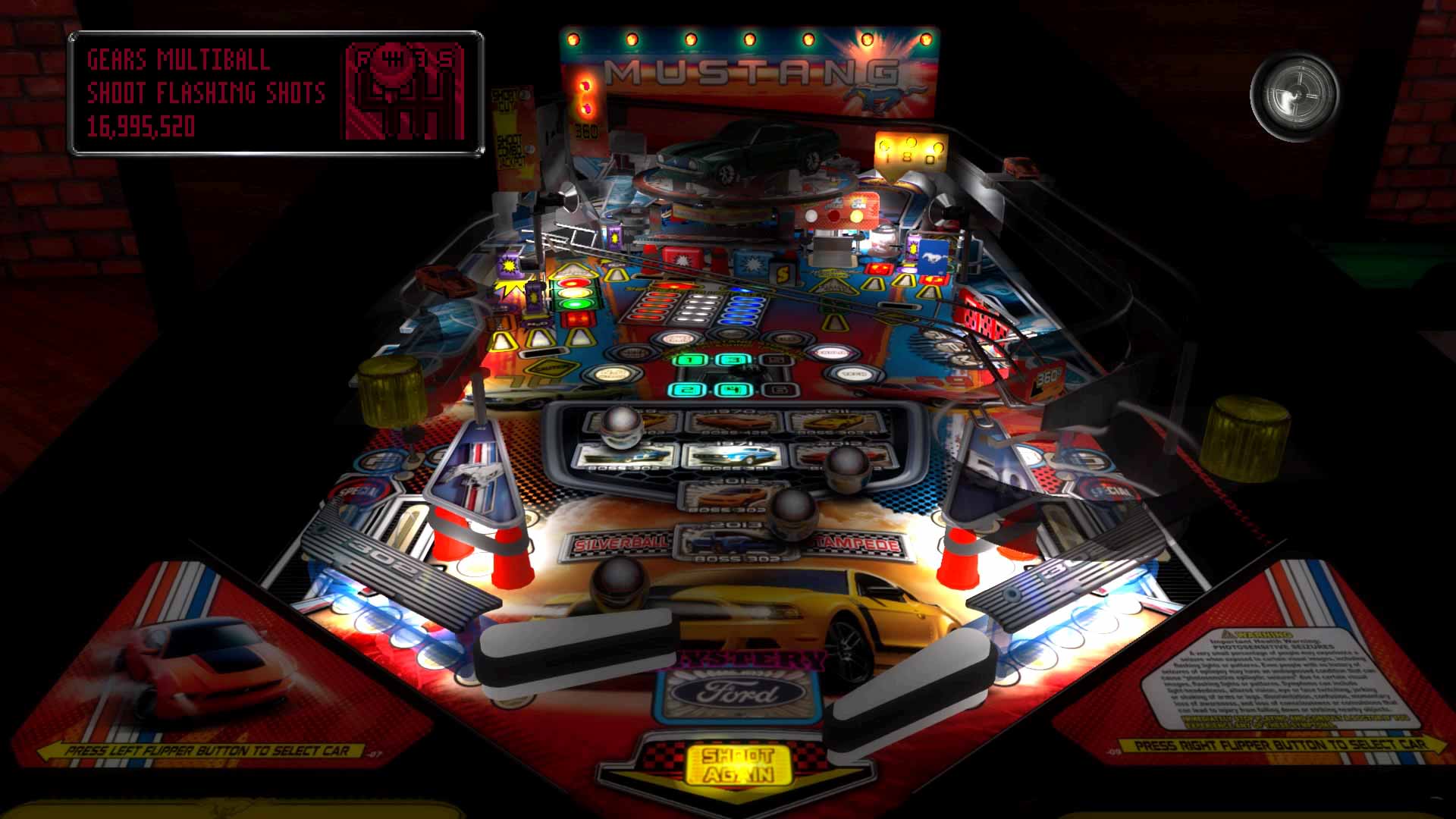 Digital pinball can’t replace real pinball, but it does an excellent job of approximating it.  If you’ve got untold thousands to spare plus a big enough storage space it would be simple enough to recreate Stern Pinball Arcade in real life but for those of us not born to cartoonishly excessive wealth, this is by far the best way to experience these games in the home.  The ball physics are excellent, doing a fantastic job of emulating how the actual pinball bounces around a table, and every recreated machine is its own unique challenge that puts those physics to work.  The selection of tables is an excellent cross-section of Stern, Williams and even Data East history, and while a significant percentage are reruns for Pinball Arcade owners, then at least there are options to either buy the unique ones individually or spread the cost out among the two bundles.  Stern Pinball Arcade contains a good amount of excellent pinball action in its opening tables and it’s going to be a lot of fun watching it grow into its own unique collection in the coming years.