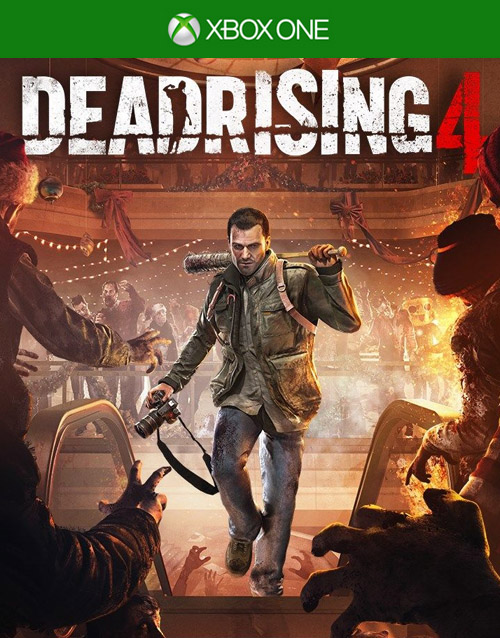 Zombies are often associated with dark, heavy stories for mature audiences. The Walking Dead and The Last of Us are standouts in the genre, each covering topics like betrayal, surviving in a bleak world and deciding whether to make the ultimate sacrifice. That’s not the Dead Rising games. Dead Rising has always been about comedy, racking up huge zombie kill counts and creating some crazy death-dealing weapons. Dead Rising 4 is the latest entry and aims to bring players back to where the franchise began, Willamette, Colorado. Developer Capcom Vancouver, however, has made some controversial changes to the franchise’s formula that have many fans worried. Does Dead Rising 4 land on Santa’s naughty or nice list?

Dead Rising 4 takes place sixteen years after the events of Dead Rising. The citizens of Willamette, Colorado have descended upon their new mall to celebrate Black Friday and then all hell breaks loose. Despite finding a cure for the virus in Dead Rising 3, a new zombie outbreak occurs. Perplexed, the Zombie Defense Force (ZDF) recruits photojournalist Frank West to go into Willamette and help them find the source of the outbreak and implicate the Pentagon, who has so far been able to deny any wrongdoing.

Dead Rising 4’s strength lies in its comedy. While the plot twists are predictable, the villain bland and forgettable, and many of the characters stereotypical, it’s all handled so well. The game elicits quite a few chuckles during its 6-8 hour runtime and there are more than a handful of memorable characters. You have your hippie millennial, no-nonsense army leader, nerdy reporters and overly-religious leader. Each has their moments, though it would have been nice to get to know some of them better. This is the Frank West show, however, and he’s a good protagonist. Consistently funny, newcomer Victor Nosslo delivers a strong performance as everyone’s favorite photojournalist. While it is disappointing to see Terence J. Rotolo replaced, Nosslo does a good job stepping into the character and showing a surprising amount of depth. 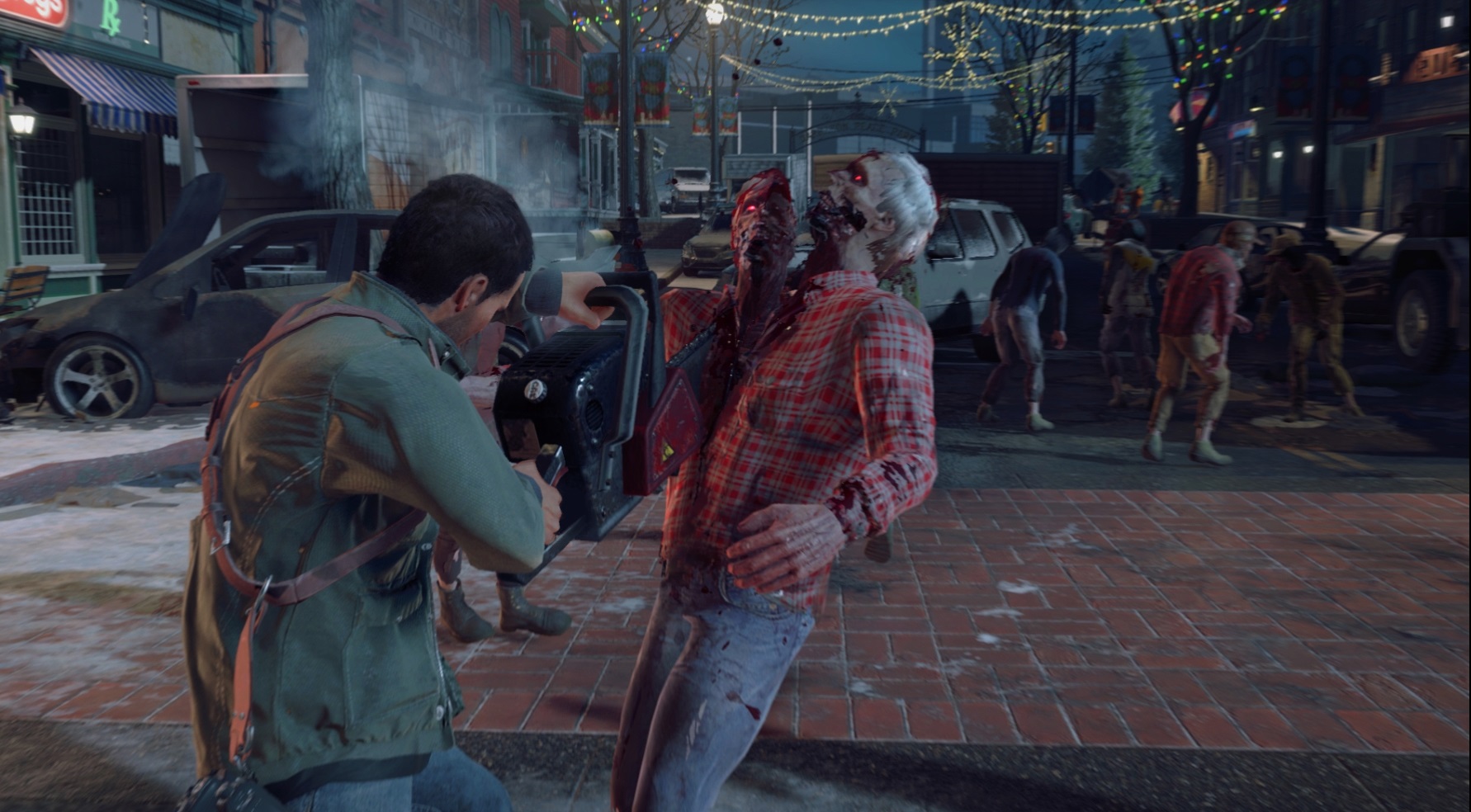 The only problem with Dead Rising 4’s plot is its one-note villain who is hastily set-up towards the end. He feels forced in and entirely out of place compared to the rest of the characters. In fact, the entire chapter feels out of place with the rest of the game. While the previous five chapters have all been lighthearted, the final chapter takes a dark and grave tone. It comes out of nowhere and stands in stark contrast to everything that came before it. Dead Rising 4’s campaign is divided into six chapters plus a brief prologue. Those powering through the campaign will likely beat it between 6-8 hours, but that’s ignoring a large amount of content available. Like the original Dead Rising, players can explore the mall in its entirety. Unlike the first game, however, players can now travel into the town of Willamette. It’s here that you’ll find a lot of rumors to check out, survivors to rescue and shelters to clean out.

Sidequests can take the shape of anything. There’s the standard go in and kill some enemies, investigation missions have Frank use his camera to uncover clues, rumor missions send Frank to check out local rumors and survivor missions have Frank save survivors. Each is important as completing sidequests in each area of Willamette will upgrade the area’s shelter. In turn, Frank unlocks new vehicles, weapons and costumes for purchase. There are also maniacs spread throughout Willamette. These crazies are incredibly powerful, usually carry powerful weaponry and are funny to boot. These fights replace Psychopaths from the previous games, and while they may not have as much of a backstory, they are just as zany. 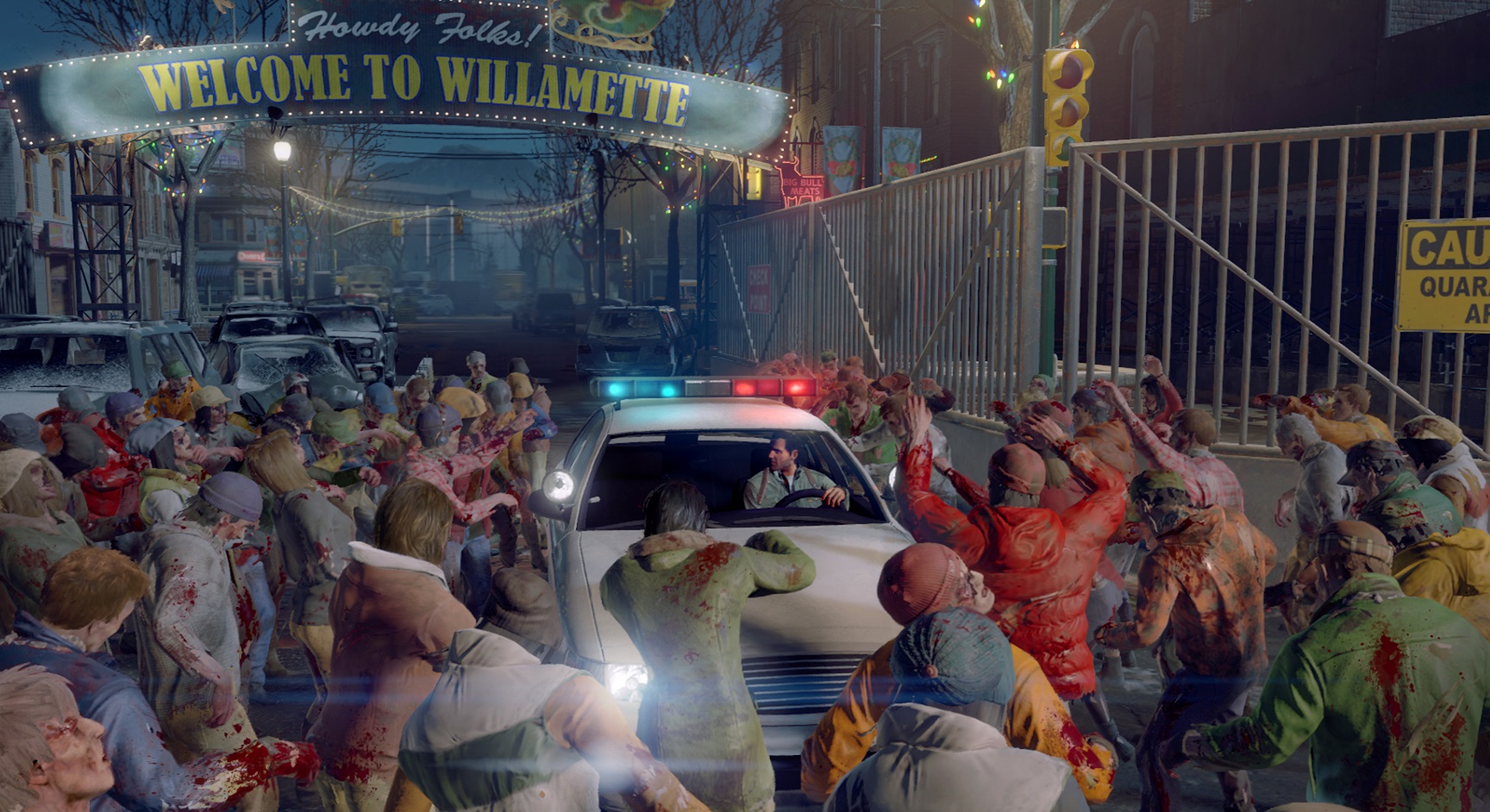 All that is great, but there’s no denying how much fun just driving around Willamette is. The town is fully realized and it’s where players can hop in all kinds of vehicles and just mow down hordes of zombies. It’s rather satisfying just to jump in a car and just spend minutes on end flattening the undead. Driving controls are tight and there’s a vast array of conventional and unconventional vehicles to play with.

One thing that isn’t so great is the loss of the timer. Dead Rising is well known for giving players a three-day time limit to complete all the chapters. It’s been a series tradition and Dead Rising 4 doesn’t have it. The campaign is structured well to where the absence of the timer isn’t felt, but it’s sad that the option to play with a timer isn’t included. Especially disheartening is the fact that the upcoming Frank Rising DLC will include a timer. There doesn’t really seem to be a reason why this couldn’t be an option for the main campaign. 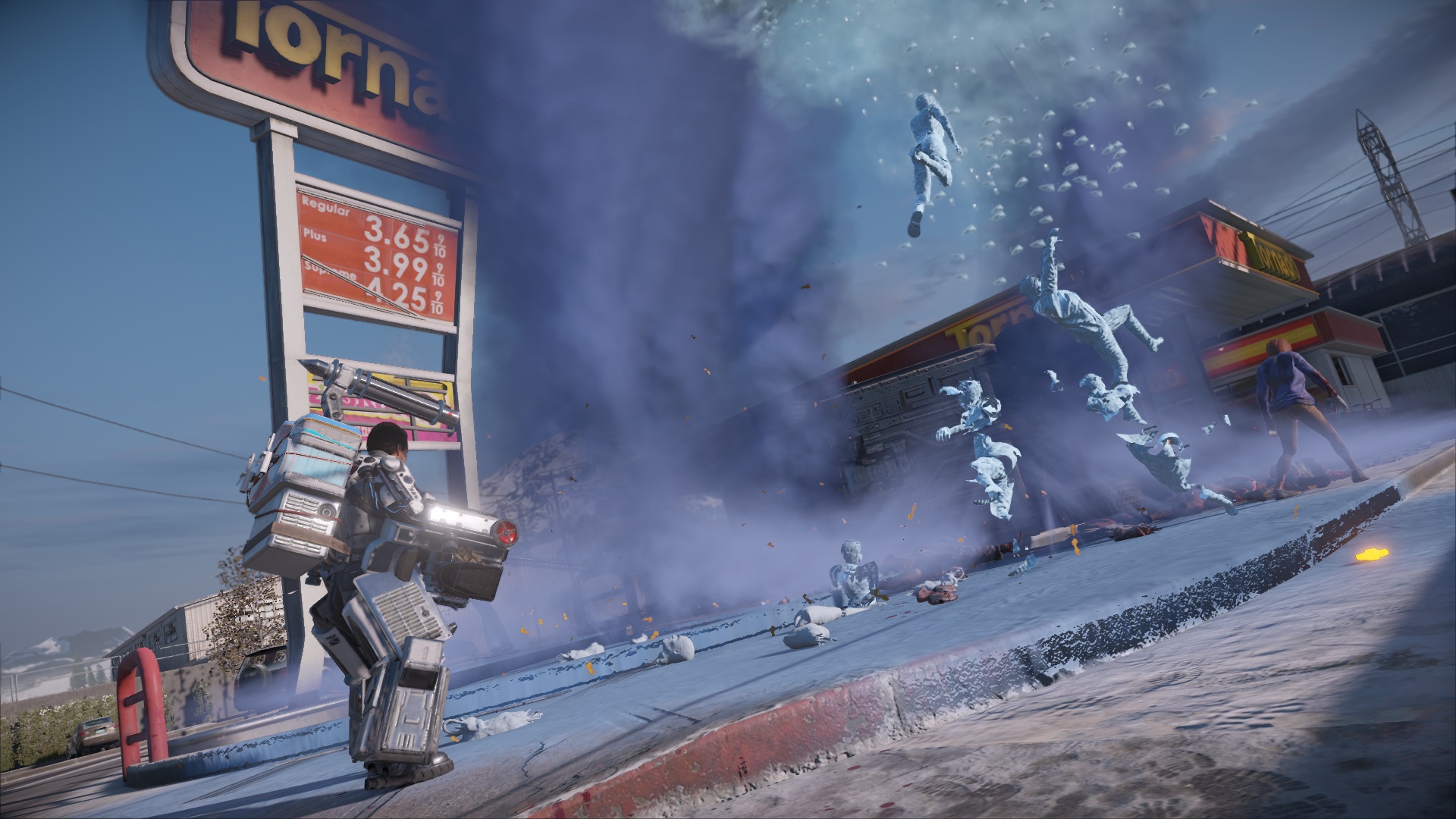 Slaughtering thousands of zombies wouldn’t be any fun if the gameplay isn’t solid, but thankfully Dead Rising 4 plays like a dream. The same inventive combat has returned with even more kookiness. Almost any item players can find in the environment can be used as a melee or ranged weapon. These items can be further enhanced by collecting Blueprints, which allow Frank to combine weapons and items into awesome combinations. Want an ice sword capable of freezing and shattering enemies? Combine a broadsword and liquid nitrogen. Want to fire explosive crossbow bolts? Grab a crossbow and strap some firecrackers onto it.

Melee combat is by far the best way to go. The weapons are inventive and the carnage they unleash is amazing. Frank has a basic attack, a sweeping attack and a powerful attack he can unleash once players rack up a decent combo. Brand new exo-suits further enhance the melee combat. These powerful suits can only be found at certain points in the game, but they pack a punch. With the exo-suit, Frank can use Christmas Trees as spears, presents as boxing gloves and all manner of heavy objects. Combine an exo-suit with a squishee or arcade machine, and you have the perfect zombie-slaying machine. It’s some of the most fun and satisfying melee combat in any game. Unfortunately, the same cannot be said for ranged combat. Despite being the fourth entry in the franchise, Dead Rising 4’s shooting mechanics feel off-putting. Aiming feels stiff, guns don’t feel useful and the brain dead human AI is somehow dumber than the actual zombies. There are some cool ranged weapons Frank can make, but melee is the way to go in Dead Rising 4. 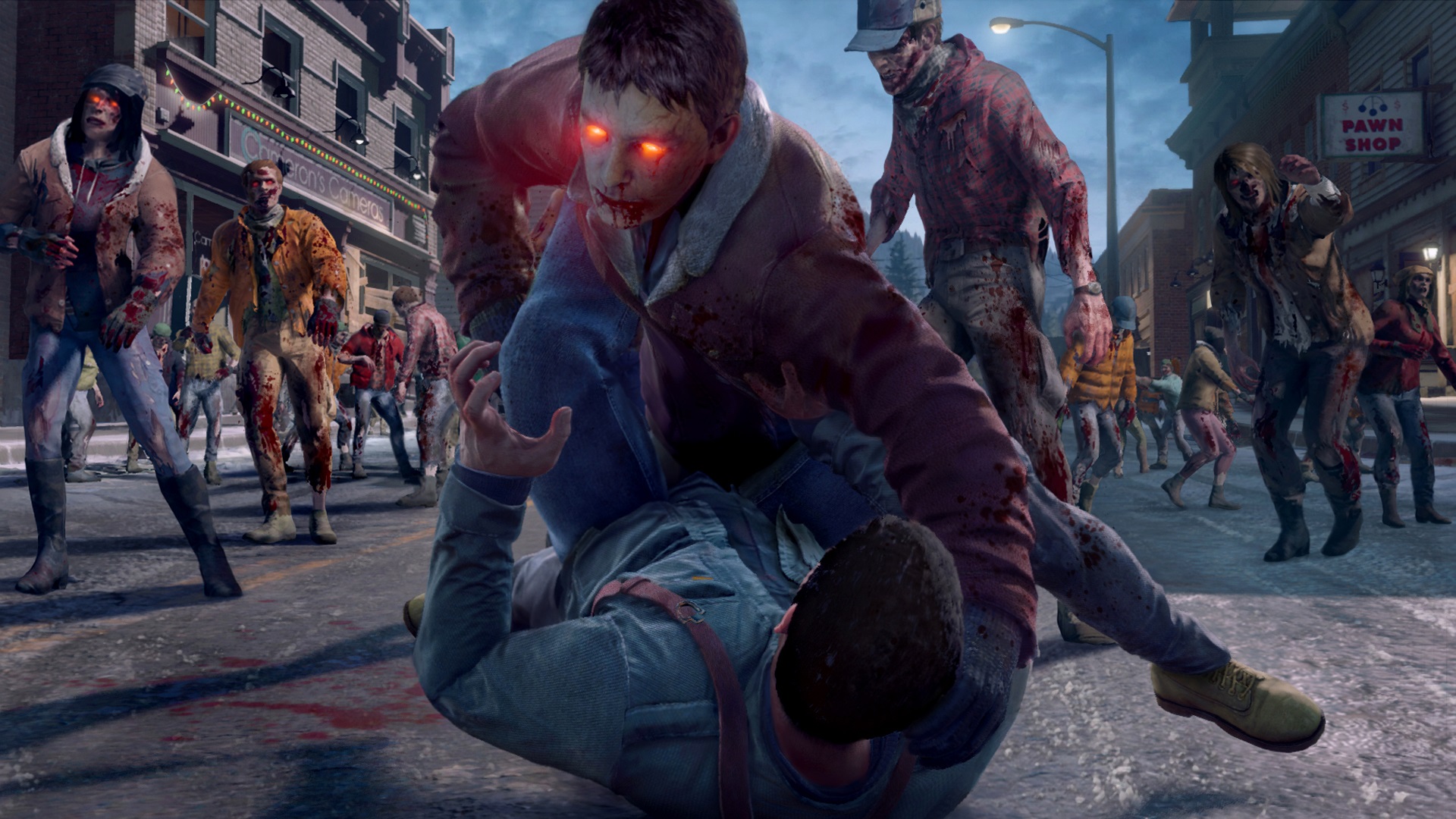 Another controversial change is the removal of campaign co-op. Rather than have that, Capcom Vancouver has crafted a standalone four-player co-op mode. Separated into four different episodes, four survivors traverse the mall completing randomized objectives. Each episode takes place over two days, which equates to about 30 minutes of playtime. The same blueprints, weapons and exo-suits that are in the campaign are in the co-op mode. It even comes with its own progression system separate from the campaign. Unfortunately, there isn’t much else to the co-op. There’s no additional story taking place, nor real interactions between the four characters. Plus, the co-op action is limited to the mall, cutting out a significant portion of the game’s world. We also experienced lag and connections issues while playing. Dead Rising 4’s co-op mode was a neat idea on paper, but it can’t hold a candle to the excellence of the campaign co-op from previous games.

Regarding presentation, Dead Rising 4 really only has one goal: throwing hordes of zombies on screen and having a whole lot of effects go off as they explode. Capcom Vancouver succeeded. The screen can be filled with hundreds of zombies at once and some of the effects are amazing. An exo-suit ability gives Frank the power to send out a blast of ice, causing zombies to freeze and shatter without the performance dropping much. Dead Rising 4 also fully embraces its Christmas setting by letting players slay zombies with famous Christmas tunes playing in the background. That isn’t to say that the presentation is flawless. Dead Rising 4 sees some significant slowdown towards the end of the game and an audio glitch would cause the dialogue to cut out in cutscenes. Taken as a whole, while Dead Rising 4 may not be the best looking game ever made, it does accomplish what it sets out to do.

Fans can rest assured, Dead Rising 4 is still a Dead Rising game despite some controversial decisions. Capcom Vancouver has retained what made the series so appealing in the first place. The campaign is, expect for that final chapter, a hoot to play through. Melee combat gives players the reins to use any tool in the world they find, combine it with something else, and then use that combination to beat the brains out of zombies. Plus, there are hordes of zombies to run over. It is a shame that some of the controversial decisions didn’t pay off. The co-op mode doesn’t feel like a solid enough replacement for campaign co-op and it remains puzzling why there isn’t even an option for a timer. While Capcom Vancouver enhanced the melee combat with the new exo-suits, sadly the shooting mechanics aren’t improved. Dead Rising 4 is a Dead Rising game, warts and all. A zombie slaying experience unlike anything else on the market. It’s a riot, it’s a hoot and it’s on Santa’s nice list.