What started as a hashed-together mini-game in acclaimed RPG The Witcher 3: Wild Hunt, the digital collectible card game GWENT garnered an enthusiastic fan following large enough to encourage developer CD Projekt RED to create a standalone GWENT title. At the time of writing this, the closed beta for standalone, free-to-play GWENT: The Witcher Card Game is still running strong. While none of the originally announced single player content is present in the closed beta, four playable factions are already present for players to diversify their games with. After spending just over a month in the closed beta, one thing is becoming increasingly clear: GWENT shows serious potential as a fair, interesting and enthralling collectible card game.

To break down the nature of GWENT for the less familiar: players begin their turns by drawing ten card hands. They can then choose up to three cards in that hand to return to the deck and then draw replacements. Depending on the factions players use, there is either a coin-toss or a player’s choice to determine who goes first. There are up to three rounds per game, and the player with the highest score at the end of a round wins that round. A player’s score is the sum of all of their played unit cards’ strength points. There are three rows to play unit cards in and each corresponds to a range type – Melee, Ranged, and Siege. Players don’t get new hands, they each draw two additional cards at the start of the second round, and one more card on the third. In other words, GWENT is a complex game of adaptable strategy, hand management, planning, and constant bluffing. 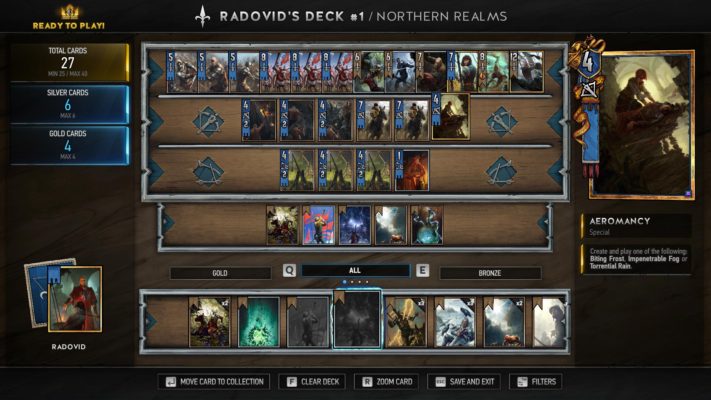 Those who made it past that last paragraph may have realized what is perhaps the biggest hurdle for any newcomer in GWENT, and that is the learning curve. GWENT’s basic rules are pretty complicated. While the closed beta does contain a decent tutorial, it can’t quite begin to show the nuances present in even the starting decks for each playable faction. That said, gaining an understanding of the basics is half the battle for victory. Because a player needs to win two rounds to win a game using primarily the hand they started out with, basic tactics like baiting an opponent to overplay their hand early on continue to stay relevant in later games.

The next hurdle for a newbie is the matter of understanding the overall play-styles trending for each faction; this allows a slightly more experienced player to take full advantage of their initial three redraws before the start of a game to look for potential countermeasures. The closed beta starts everyone out with competent starter decks for each of the current playable factions: Northern Realms (knights and armies), Monsters, Scoia’tael (Elves and Dwarves), and Skellige (the Witcher world’s vikings). Each, of course, have their own methods for amassing a higher score than the opponent. Now, explaining how each deck differs from the others will simply take too long and that’s not what this preview is for. Suffice to say, there’s a ton to chew on from the get-go but that all goes into ensuring an even playing field accommodating differing play styles. 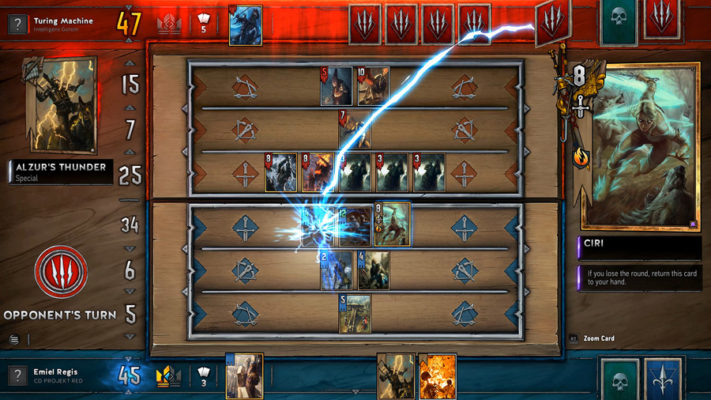 As a somewhat experienced GWENT player, it is actually a little difficult to find anything as glaringly unpleasant about the game as its learning curve. For now, the UI can use some work, it’s not easy to scroll every card in a collection, and the filters in the deck builder leave much to be desired. For a card game, the beta does not perform as smoothly on older hardware as one would expect. Cards also load slowly, or incorrectly, at times so cards that allow browsing of the discard pile can chug. Finally, the servers aren’t perfect and at the time of writing this, they’re “overloaded” and matchmaking is disabled. On the bright-side, GWENT features a pleasant Practice mode which pits the player against a random CPU-controlled faction that always gets the same games in the same order. This allows players to test new decks on some strong strategies from each faction.

One of the biggest changes this standalone game has over the original mini-game is the massive presence of card synergies within each faction. So far, every playable faction has its own collection of cards that very clearly rely on other cards being played in a specific order. Since each faction has its own cards, clever players will need to watch how they put forward their strategies for each round to avoid being predictable. For example, the Scoia’tael faction has a rare card which buffs all Dwarves. If a player is smart, they won’t just play Dwarf cards in some mismatched order, they’ll try to make it look like it follows a different logic. Every round can be pretty busy as well, using the same example… there are Dwarf cards that buff other cards so players can look like they’re just bolstering their offensive or their preparing for the next round by playing Dwarf units with the ability to carry over into the subsequent round. Players can get pretty mysterious; there are tools in the Skellige faction that actually encourage discarding cards and then reviving them. Since getting the highest score doesn’t necessarily mean getting a high numerical score, there are even players who have intelligently built decks meant to kill enemy unit cards rather than outdo them. The variety of tools present can make most games into a series of manageable surprises for both people involved. 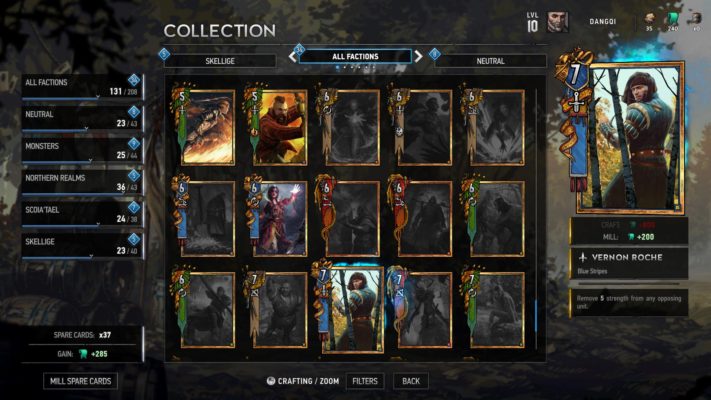 As players win games, they’ll accumulate Ore – used for buying “keg” booster packs – and Scraps – used for crafting cards. At this time, it’s possible to craft and acquire all the cards in the game within a few months of moderate play. Speaking of, it’s still mostly no contest that there are simply just better cards than others. If the matchmaking does a good job, people won’t get matched with someone who out-levels them but it doesn’t always work out that way. Sure, card synergies help with this, but it is entirely possible to realize you’re going to lose a game halfway through the first round. With such a limited supply of options to last across those two or three rounds, hitting a wall before the end of just the first round can reveal an issue with the structure of the game itself.

To keep people playing, the incentive of collecting cards is important. But if those new cards aren’t, in some way, better than their current ones, players have little reason to collect more. Now with four different factions — each with their own faction-restricted cards — it’s normal to get kegs featuring healthy varieties of cards belonging to different factions. On the brightside, the crafting does help alleviate this. On the downside, some players will inevitably be trudging with unfamiliar factions and subpar decks until they’ve acquired the cards necessary to have a fighting chance during matchmaking. It’s familiar territory for many, and fortunately, it doesn’t typically last too long with the current card pool. Speaking of card pool, GWENT may hit issues with longevity. The game features characters from the Witcher series as cards, and with the fact that the basic structure is score-based over up to three rounds, it’s hard to say whether GWENT will be able to keep changing it up without one day adding entirely new mechanics. 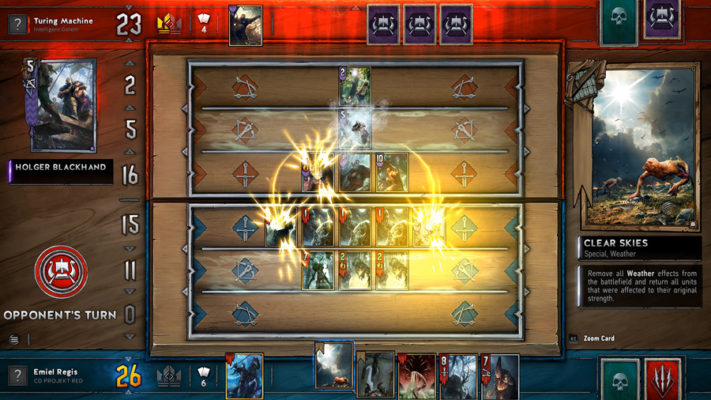 Most would agree that the most important thing CD Projekt RED need to be mindful of is the balance. There are balance issues right now – decks that are almost unbeatable. First of all, the patching is occasional but sweeping. At the time of writing this, the next patch (version 0.8.25) features a substantial amount of balancing changes centered on all the major points players have had issues with thus far. For example, there are weather cards which will reduce the strengths of most units in a row to just 1. Players had built decks primarily featuring cards that were unaffected by weather, and then packing a large amount of weather cards. At this time, such a deck allows players to neuter their opponents unless a Clear Skies card is played. The problem is Clear Skies only clears weather, it’s otherwise a wasted slot in a card game where the first hand is the only hand. Drawing Clear Weather is useless unless the opponent plays a weather card – which affects their cards as well. Patch 0.8.25 brings a buff to the Clear Skies card, changing it to First Light and allow users to alternatively spawn a weaker unit card. It’s sort of a bold change, but that’s what betas are for. To add context, there used to be decks I had no way of beating. After this next patch, however, those same decks are nerfed. CD Projekt RED has a good reputation for listening to their community and if this early wave of changes is any indication, GWENT may become a haven for lovers of a well balanced game of cards. In other words: so far, so good.