Have you ever come across a game that you’ve shown a great amount of interest in, but just weren’t able to actually describe why the game is so appealing? That was my dilemma with Shattered: Tale of the Forgotten King. But the struggle here has more do to the fact that Shattered has so many positive elements working in its favor that it becomes difficult to think of a truly unique angle when it comes to covering it. It has a dark and attractive visual style, a unique and mysterious world with intriguing characters, trusty hack-and-slash combat, an emphasis on puzzles, huge areas with 2D platforming…I could go on for quite a while. Of course, this is a preview, so I will be going on anyway with an initial look at the game’s pre-alpha demo, so let’s get to that already.

Shattered: Tale of the Forgotten King is the story of The Wanderer, a mysterious and mute sword-wielding figure seeking the answer as to what happened with the ruined land of Hypnos, where every living thing is wearing a mask defining their personality. Along the way, they also have to uncover their own past memories as well, piecing things together from the only creatures in this world allowed to talk, the eerie and scrawny Whisperers. Then there’s also the twelve massive Demiurges that act as bosses, and…you know what, this isn’t really doing the story justice. As seen on the game’s Kickstarter page, a huge chunk of the unique lore has been developed quite a bit, painting a picture that sets up a highly engaging story. In fact, piecing together Shattered’s world and paying attention to it is the key to success and the best ending, nicely putting the focus on it. 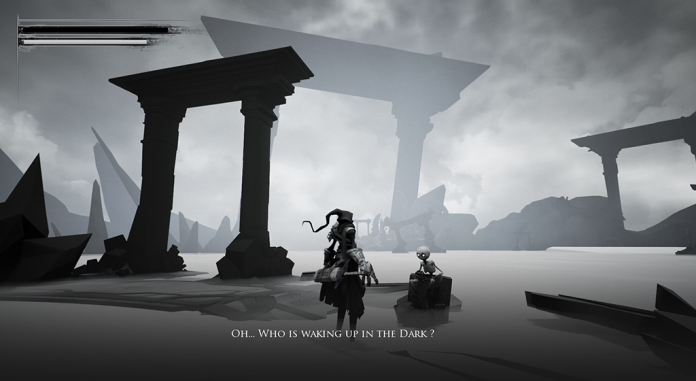 The visual style of Shattered, unsurprisingly, is an absolute treat. Cold blacks and blues are the main focus, emphasizing a quiet yet apocalyptic feel, with occasional bursts of flames and nicely juxtaposed with characters that have more cartoonish proportions and feels. The landscapes of Hypnos themselves are eerie, barren, surreal, and rocky, and they’re the setup for some nice and rather huge level design, the type that reward you for going in every possible direction and searching every nook and cranny. It almost feels like each stage is a little metroidvania of its own, each with their own puzzles and tasks, such as simply hunting for three switches to open a gate. Getting through each level is rather fun thanks to some solid platforming segments with the traditional jump, double-jump, and air dash, though an excess of bottomless pits and what felt like some floaty controls hindered things slightly.

Now, the obvious flaw when it comes to previewing a pre-alpha demo is that while it’s playable and provides valuable first impressions, it’s still in a rough, unfinished state. But for a game like Shattered, it does make me wonder which parts were intentional and which weren’t. There is a bit of an issue with the combat right now, if only because it takes two or three hits from an enemy to wipe out your entire health bar. The mechanics behind it are perfectly fine, and are easy to learn and feel fun to use, but I felt it simpler to just avoid enemy encounters altogether, jumping over them and getting the heck away. But then there’s some confusion about how some of the game’s rules specifically work, such as how death plays into things. 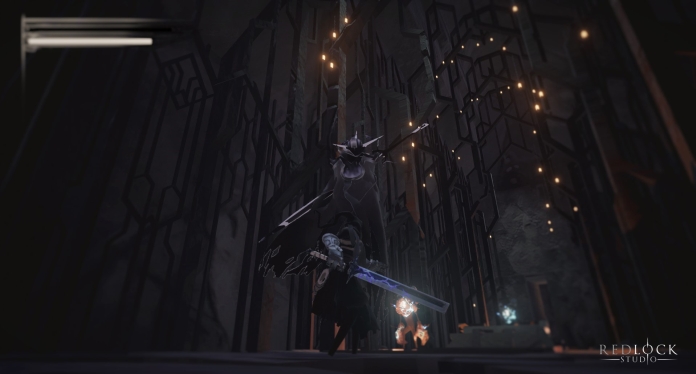 For example, at one moment I came across a valuable key that got tucked into The Wanderer’s inventory. After dying, I checked the inventory and found it to still be there. But then after a couple of more deaths, I finally came across the door the key was required for, only to discover that it was no longer with me, and that I would have to trek across the huge chunks of land with the aforementioned bottomless pits to get it again, which was frustrating. There also isn’t much in the way explaining how checkpoints work, with most deaths dropping you off at the very beginning of the stage instead. Whether these are pre-Alpha glitches or not, we have yet to see. Discovery is part of the fun with games like these where exploration is a key element, but some bits will need to be a tad more up-front.

Despite any flaws it may have during this rocky pre-alpha stage, though (which are expected), Shattered: Tale of the Forgotten King left a positive impression indeed thanks to its haunting world, impressive visuals and enjoyable platforming, with the more awkward bits to hopefully either be fixed or balanced out as development progresses (and features like the skill system and crafting elements to be fleshed out as well). And thanks to its highly successful crowdfunding campaign and Square Enix Collective support, we will be getting more of Shattered between now and its planned release date of January 2018, so we’ll be keeping our eye on such a promising and unique action game in the future.