February 14 is a day that our overly -commercialized culture has conditioned us to associate with love. Things will be different in 2017, for Valentine’s Day will be about war when For Honor is finally released. Valentine’s Day does commemorate a priest getting decapitated, so in that context a game that features a three way war between Samurai, Knights and Vikings seems fitting, but a holiday that started as with a saint’s decapitation that has devolved into candy hearts with schmaltzy phrases has nothing to do with For Honor beyond the release date. Hardcore Gamer has previously discussed some of the multiplayer features found in For Honor, such as Dominion and Duel, and yet Ubisoft is still able to unveil new aspects of the online gaming component of this upcoming title. Faction War is a meta game that will consistently run across the three platforms, Xbox One, PlayStation 4 and PC. While people who own For Honor on Xbox One will not be able to play against people on PlayStation 4, the world map of Faction War will be shared across each platform. Territories will be controlled by whichever faction has the most war assets occupying it, and each faction will defend their own territories and contest those occupied by a rival.

The Faction War is divided into three different time segments: Turns, Rounds, and Seasons. Turns last for six hours, and whichever Faction has the most War Assets in a Territory at the end of the six hour period controls. Rounds last two weeks, and the Faction with the most Territories wins the Round and every play who engaged in at least one multiplayer activity during the Round will receive rewards. The rewards received will be determined by the rank of the Faction and these rewards include Scavenger Crates and Steel, the in game currency. Seasons last for ten weeks and the Faction that wins the most Rounds will win the Season and rewards will be given to all players of all Factions, even if they did not play any multiplayer during the season. Season rewards are exclusive to Faction War and will be determined based on the rank of the Faction. These rewards include Ornaments, Scavenger Crates, Steel, and Emblem Outlines. Players will pledge loyalty to one Faction, either the Vikings, Samurai, or Knights. Players will be free to play any character they choose, and the outcome of their games will count toward their aligned Faction.

The results of the Faction War will have a noticeable influence on multiplayer modes. Each map will receive variations based on where the Front is located and who is occupying it. The War takes place on various Fronts, so let’s say the Dominion Front is in Valkenheim, the land of the Vikings. This will make all Dominion maps to be decorated in the Valkenheim style, which would look snowy and Scandinavian. Now let us say that this Front moves to the Myre, which is Samurai territory. These maps will no longer be the snowy Nordic landscapes but will instead take on the appearance of a sweltering jungle, which sounds delightful as I am writing this in negative eleven degree Celsius temperature with 17 centimeters of snow on the ground. At launch there will be twelve maps, each with four to six variations making the total different map variations 60. It should be noted these variations are not intended to create the illusion of there being more maps, but instead they are supposed to show a change in the same area based on a change in Faction occupation. Post-launch content will be influenced by Faction War with new maps and extra content releasing at the end of each Season. 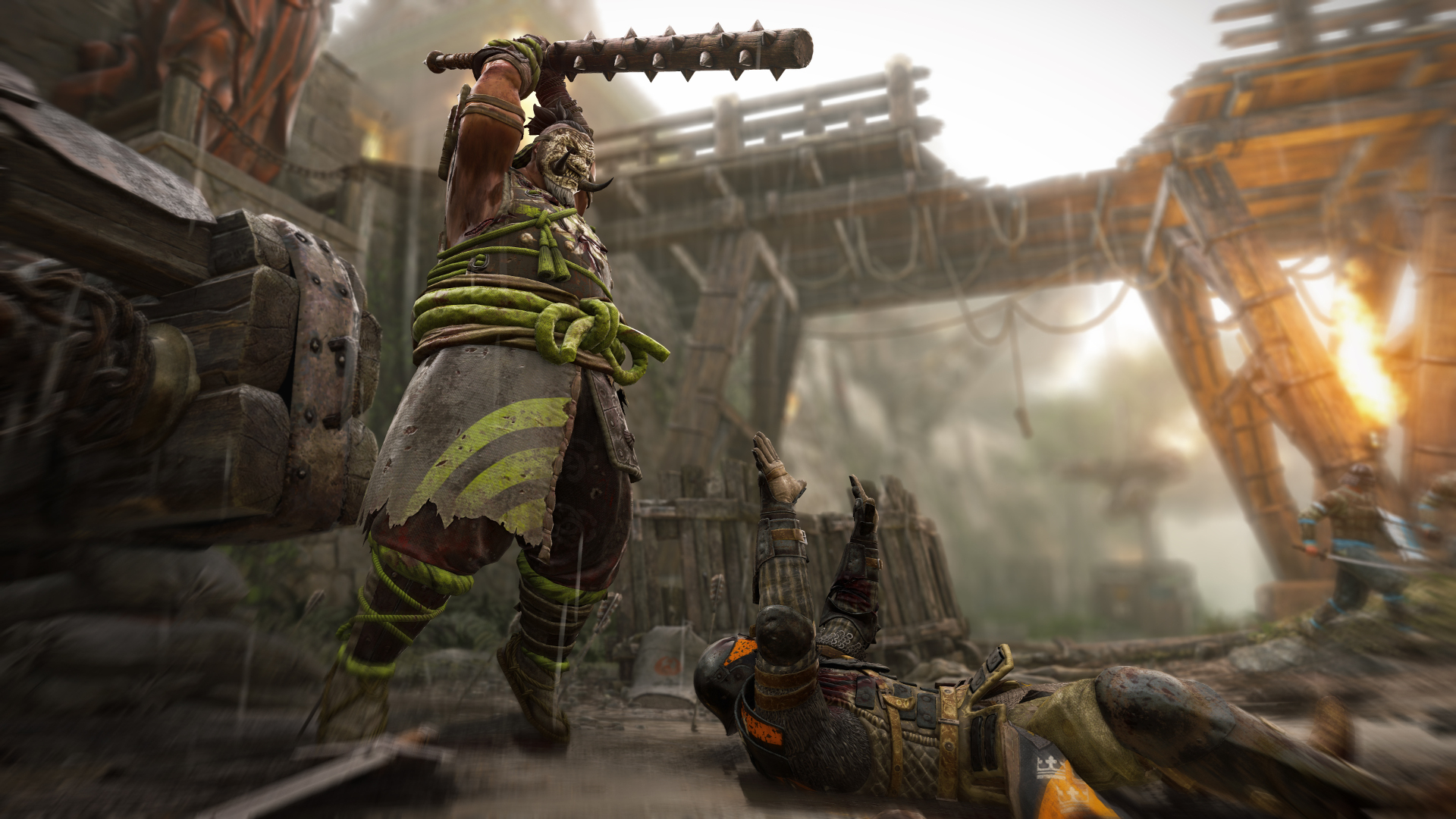 A new multiplayer mode has been revealed, and that is Elimination. This is a four on four best of five round competition. There is no territory to conquer and no respawning, it is simply a matter of killing everyone on the other team to win. Automatic respawning does not happen, but players can be revived by their teammates provided they were not knocked off a cliff or executed. These matches can be extremely intense and advantages can be lost and gained in the blink of an eye. This is a mode that can be highly entertaining for long periods of time, especially if you can get with the right crew. This mode also introduces boosts which were not available in the previously sampled multiplayer modes. Boosts can temporarily grant an advantage to a player, such as increasing attack, defense, movement speed, or instantly unlocking a powerful feat.

For Honor has a lot to do in online multiplayer, but something we have not discussed prior to now is the single player campaign. Based on 2015 PAX teasers and fighting the AI cannon fodder warriors in Dominion multiplayer mode, I thought this game might play similarly to Dynasty Warriors. Upon revisiting this assumption after playing some of the single player campaign, a disgusted voice with a heavy Swedish accent simply said no, you are wrong, go home, take a shower, and wash the shames off yourself. Like 99 percent of games, the player is outnumbered at all times but it is not one against 3000. The peon enemies are a bit tougher than the drones in multiplayer, but fighting them is done with the same Art of Battle system that is used on the bosses, the regular enemies just go down a lot easier. The Art of Battle system is difficult to explain in a way that truly does it justice. Holding the left trigger locks onto a target and the right thumbstick determines which direction the character will block or attack. Other actions such as throws, guard breaks, and parries add another layer of complexity, and choosing which action is best based on anticipating your opponent’s next move or choosing how exactly to react when they are on the offensive will determine the outcome of battle. Battle does require strategy as simple button mashing will send the player to an early grave. Battling someone with a controller will never recreate an actual sword fight, but mentally how one approaches an opponent and chooses their actions is much closer to mimicking the feel of melee combat with this system than I have experienced in any other game. I was fortunate enough to get some hands on time with two missions from the single player campaign. 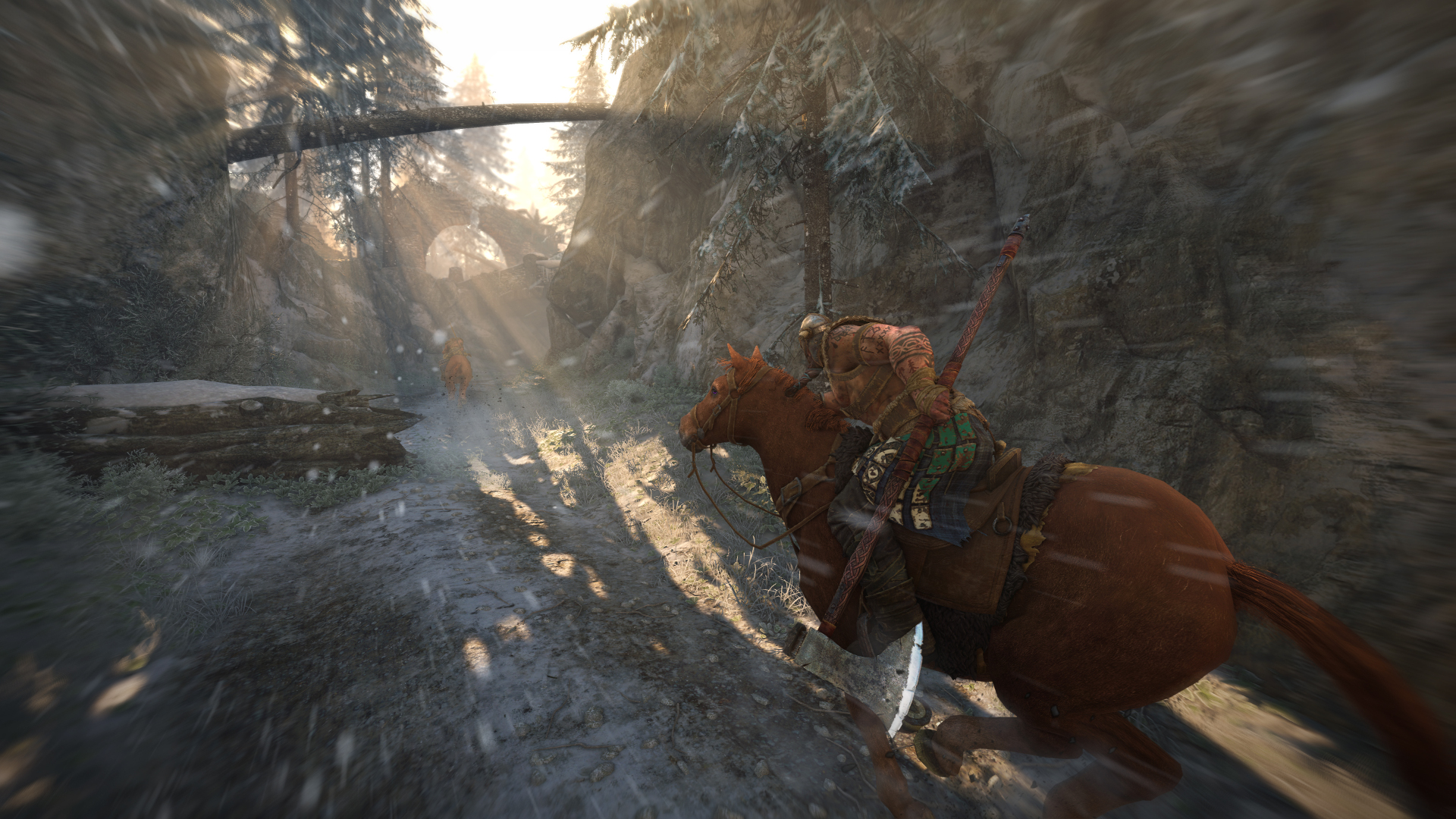 The first mission was the one that kicks off the Viking chapter in For Honor’s story mode and this was called Raiding the Raiders. The Vikings were starving as per Apollyon’s plan (there are several unkind things that can be said about Apollyon, but critiquing her armor is not among them), and instead of being practical and sharing their resources they are slaughtering their fellow Vikings to horde all the food for themselves. The Raider, who was self exiled to the mountains, returns to his village after hearing of this behavior that is most unbecoming of those wishing to enter Valhalla. Rangar, a powerful Raider who has control over the lion’s share of food, is confronted by the Raider in a long duel that ends in an intense horse chase, which a glorious cutscene at the end that shows Vikings don’t mess around when it comes to crushing their enemies. The Knights have a mission called Sabotage which takes place later in the Knights chapter. While in Valkenheim, Apollyon dispatches Mercy the Peacekeeper to destroy a massive elevator used by the Vikings to transport food and resources. Mercy needs to sneak into a Viking stronghold, dispatching enemies along the way before she can destroy the elevator, whose destruction unfolds in spectacular fashion. The single player campaign will encompass each of the three Factions, and the role that Apollyon plays in orchestrating the chaos will be revealed. Players will level up their characters throughout the game which can lead to unlocking special abilities, such as being able to heal health points.

For Honor has a roster of twelve Heroes, and three new Heroes were revealed: the Peacekeeper, Shugoki, and Warlords. Peacekeepers are the Assassin Heroes for the Knight Factions. These warriors are quick and nimble with the capability to deal high damage with their short sword and poisoned dagger, which can cause enemies to bleed, draining their health points over time. Their offensive power and speed comes at a cost to defense, as their blocking abilities are weaker than other Hero types and it only takes a few good hits to bring them to the ground. Shugoki are the Samurai Heavy Heroes and they embody that term. The Shugoki are the opposite of the Peacekeeper, they are slow and imposing bipedal tanks. They have the highest health points in the game so they can take a lot of abuse before succumbing to defeat. Their weapon of choice is the kanabo, a massive studded stick that packs quite the wallop. Their attacks are slow but difficult to interpret, and not only will a strike from them take a good chunk of your health bar away but they can send their opponents back quite a bit. The Warlord is a Heavy Hero for the Vikings. Armed with a sword and shield, Warlords possess a good mix of offensive and defensive strength. Their range on the battlefield is on the short to medium range but they are great at throwing opponents and have a heavy attack that can’t be interrupted. Thanks to their shield, they are able to block while attacking and are capable of being able to temporarily defend all stances at once. 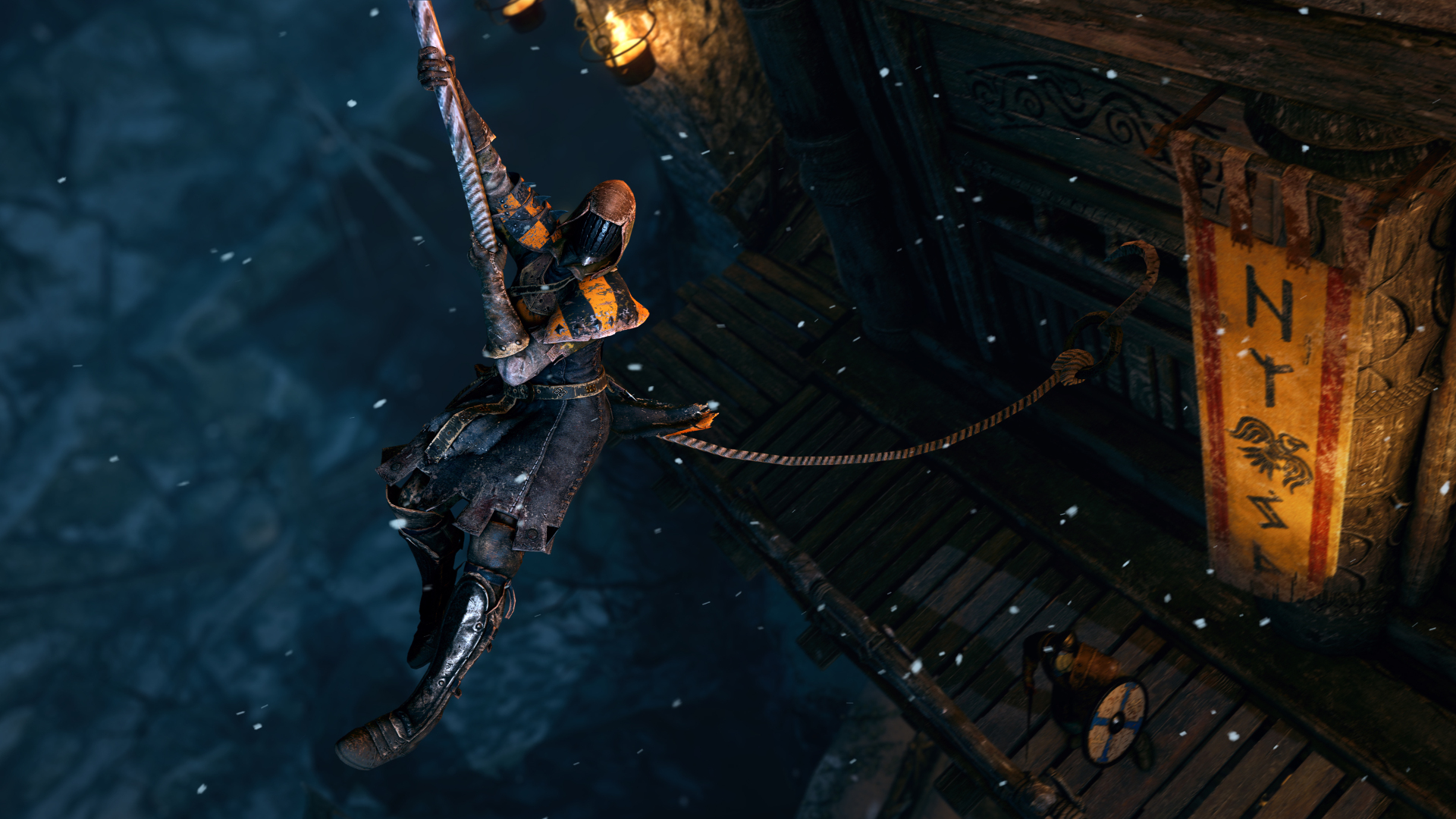 To gear up for the February 14 launch, there will be a For Honor Closed Beta sometime in January, similar to the Closed Alpha they did back in September. The Faction War will be unveiled during this event and players will be able to track rankings, leaderboards and view the shifting battle lines at this site. All players who participate will receive a reward and members of the winning Faction will receive an exclusive to be announced bonus. After playing several early builds of For Honor, I can say this is a title that has continued to impress me with something new each time I got to sit down with it. Before I got to experience this new content, I joked with the boss that I really have no idea what more I can say about this game, which based on the length of this preview was not the case. The graphics are amazing with minimal difference between cutscenes and gameplay, which is largely due to there being no high or low res models; the same character models are used for both. The animation is fluid and realistic due to the approach they took with motion capture. Every multiplayer mode I’ve played has been enjoyable, and with the advantage able to shift as easily as it does it really is never over until it’s over, and the cinematic presentation of events in the single player campaign indicate that this will be a great time to play solo. The gameplay mechanics have a surprising amount of depth to them, and while many details on the story are unknown at this time, the little that has been revealed hints that For Honor will have an involved and enjoyable single player campaign. Even for people who hate Hallmark holidays, For Honor is a reason to get excited about Valentine’s Day.