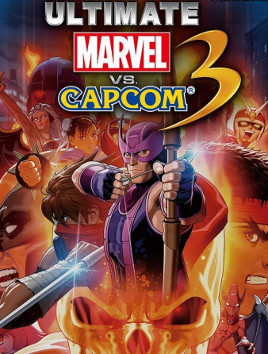 A wise man by the name of Kevin McMahon once stated that there are no fair fights. This statement rings true in most areas, though some fights are much more unbalanced than others. Mike Haggar and Ryu both look like juicers, with one being an ex professional wrestler and street fighter and the other a master of Shotokan karate and champion tournament fighter respectively. Neither one of those dudes are people most of us would best in a friendly bout of fisticuffs, but even with their hand-to-hand combat prowess and musculature that requires countless hours in the gym and many expensive supplements that can’t be bought over the counter at the local GNC, Morrigan Aensland is an actual succubus so her demonic powers give her a slight advantage over mortal men, and Thor is an actual god so he too has a few powers that give him an advantage over typical humans. But none of this matters because just like comic books, those pesky limitations imposed by the real world have no business in video games, so whether the three person team is composed of humans, mutants, demons or robots, any team in Ultimate Marvel vs. Capcom 3 has a shot at beating their opponents.

Ultimate Marvel vs. Capcom 3 is the newest addition to the collection of last generation games receiving a tummy tuck and facelift to appear on a current platform. This reissue was likely done in part to cash in on the announcement of Marvel vs. Capcom: Infinite, but speculating on motives aside this is good news for Marvel vs. Capcom fans who may not have this title for whatever reason. This title was delisted from the PSN and Xbox Live stores back in 2013 and finding a new copy out in the wild is fairly difficult these days. This reissue is Ultimate Marvel vs. Capcom 3 upgraded to 1080P/60 FPS and includes all DLC, including Jill Valentine and Shuma-Gorath making the roster of playable fighters a nice even 50. There is also a new gallery mode that includes artwork from Marvel vs. Capcom: Official Complete Works for the art aficionados out there that can be unlocked with points accumulated through the various game modes.

Those people reading this review that know this game inside and out can skip the rest of the review since I doubt I will be able to tell you anything new. But for people who haven’t mastered the art of putting the smack down on Galactus or simply have some time to kill, I implore you to continue reading. Just remember to wash your hands. 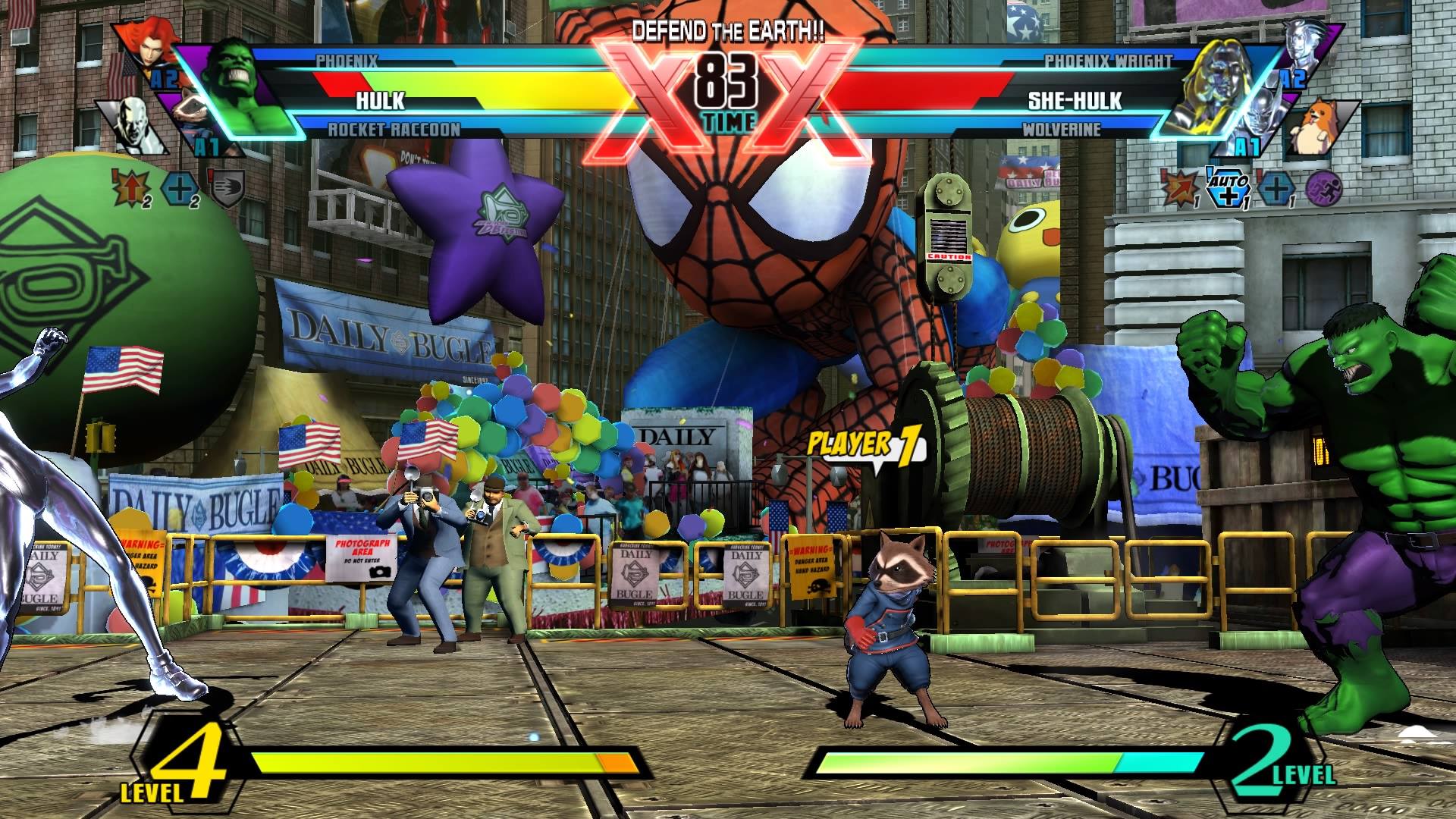 Ultimate Marvel vs. Capcom 3 follows the same three on three tag team format introduced in its Dreamcast predecessor. If the title of the game didn’t give away the entire concept, this is a crossover fighting game starting characters from Capcom games like Viewtiful Joe, Street Fighter, Final Fight, Phoenix Wright, Devil May Cry, Okami, Mega Man, Resident Evil, and Ghouls and Ghosts fighting alongside and against characters from the Marvel universe, such as Deadpool, Spider Man, Ghost Rider, The Avengers, Fantastic Four, Guardians of the Galaxy, and The X-Men. Fights are only one round, but in order to win all opposing fighters need to be defeated.

Capcom has always excelled at making 2D fighting games, and Ultimate Marvel vs. Capcom 3 does not deviate from their working formula. The Marvel vs. Capcom games do emphasize teamwork more than their other one on one fighters which leads to additional fighting strategies. As stated, to win a match all three fighters on a team need to be defeated. When a fighter receives damage part of their health bar turns red, this is the amount of health they can recover if the player swaps out a different character so rotating team members can extend the character’s fight life. Characters can also be called into the battle to briefly do a support move, though if this is timed poorly two of your teammates can end up on the wrong end of an opponent’s special attack. The most useful way having three people on a team in dealing damage is doing a special attack that uses charges from the Hyper Combo Gauge that has all three characters attacking at once. The controls are very smooth and responsive, and for people who haven’t mastered the art of memorizing endless button combinations for special moves there is an option to set the control scheme to simple input where the Hyper Combo Gauge moves can be executed with a single button. 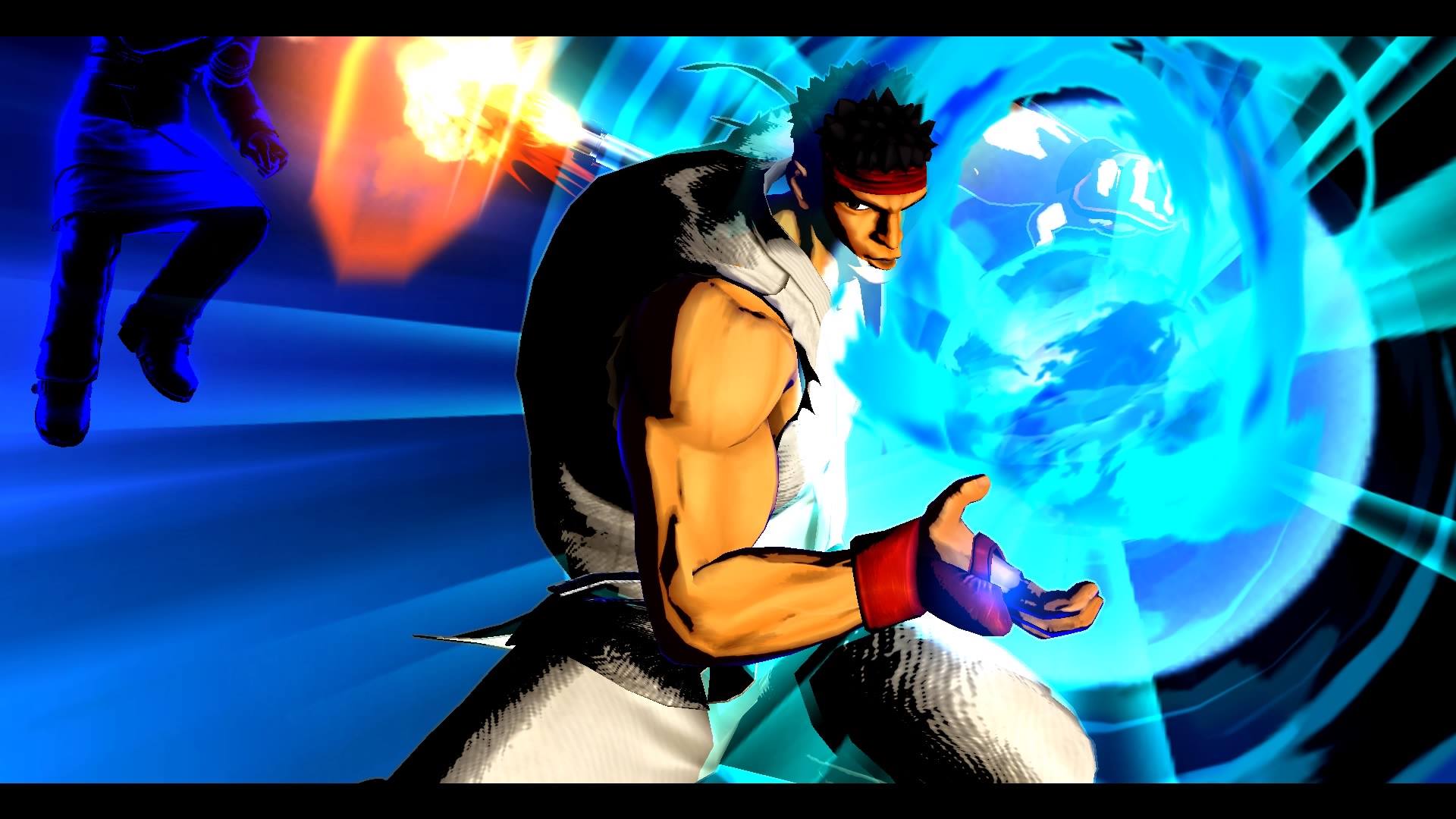 There are a few different game modes to keep things interesting, both online and offline. Arcade mode is the standard single player experience where players fight through several matches before reaching the final boss Galactus. There is a story that really just amounts to somehow all these different video game and comic book characters come together and need to join up to stop Galactus from eating Earth. It is not very well developed but for this type of game it really doesn’t matter too much. There are plenty of games out there that tell amazing stories and have great emotionally charged character arcs, this is not one of them, this is simply comic book style carnage. Getting to Galactus is in arcade is not too difficult but the difficulty spikes exponentially when he does show up, though one probably shouldn’t expect someone whose hand is the size of the Incredible Hulk to be easy to beat up. There are two approaches to beating Galactus, one is to skillfully study his patterns and learn when to attack and when to defend, and when to use which type of either and beat him through expert reflexes and brilliant strategy. While this may take a while to master, it is possible since he does have a somewhat predictable pattern and he broadcasts his moves well in advance. The other approach is to figure out how to cheese him to death by spamming certain moves, Iron Man, Wolverine, and the Sentinel are some characters that are good at this latter approach.

Arcade mode is enjoyable in small doses but most of the fun of Capcom fighters has always been squaring off against another human opponent, and this title has that covered whether you got a buddy on the couch or the bastard moved a few hours away, this game provides the fuel for the nerdiest trash talking on and offline. Online versus mode is also a great way to get in fights with strangers and not go to jail, though if someone likes fighting jail is a good place to get into more fights with more strangers. While that could be appealing for some, I think most of us would agree Ultimate Marvel vs. Capcom 3 is more fun than fighting in jail. 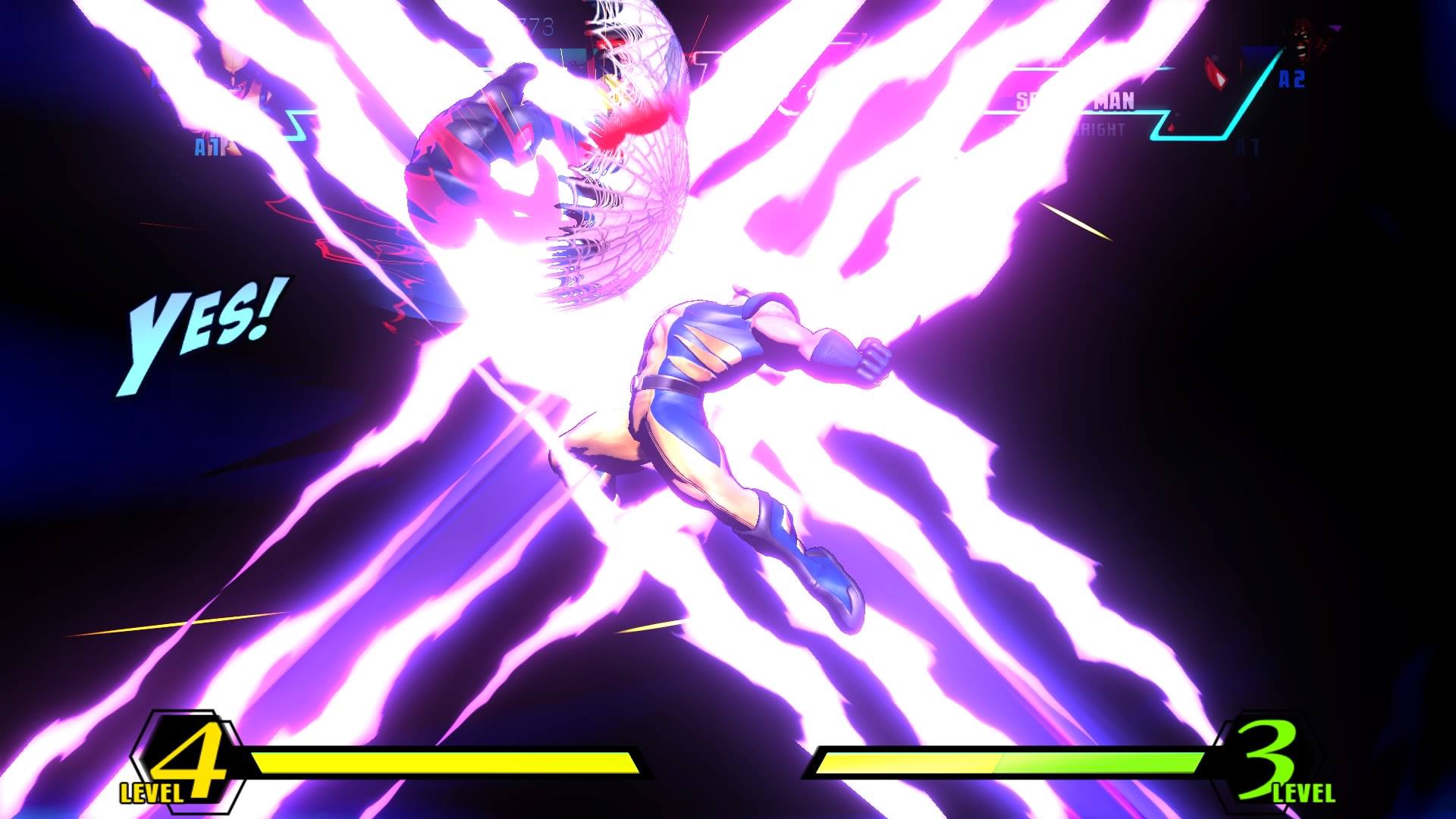 Outside of those two modes there is a Heroes and Heralds mode which consists of a week long campaign. This can be played either online or offline, and it involves taking over various territories through the standard three on three brawl format. Fighting for the Heroes means fighting to save the Earth, while fighting for the Heralds wants to bring about the world’s destruction. There is also a collectible card component where players can create a three card deck to bring special abilities to the fight, and viewing this deck will oddly bring back memories of Marvel vs. Capcom 2. The remaining modes are a training mode where players can get acclimated with the various characters, and a mission mode where certain challenges need to be met with specific characters, usually in the form of executing a special move or pulling off a combo.

The music is primarily composed of remixed versions of the various characters’ theme music. It is recommended that the player go into the option menu and switch the BMG from standard to dynamic as it sounds much better. The 1080P/60 FPS upgrades do look nice but as is the case with every remaster putting a fresh coat of polish on a five year old game will not make it look current gen. 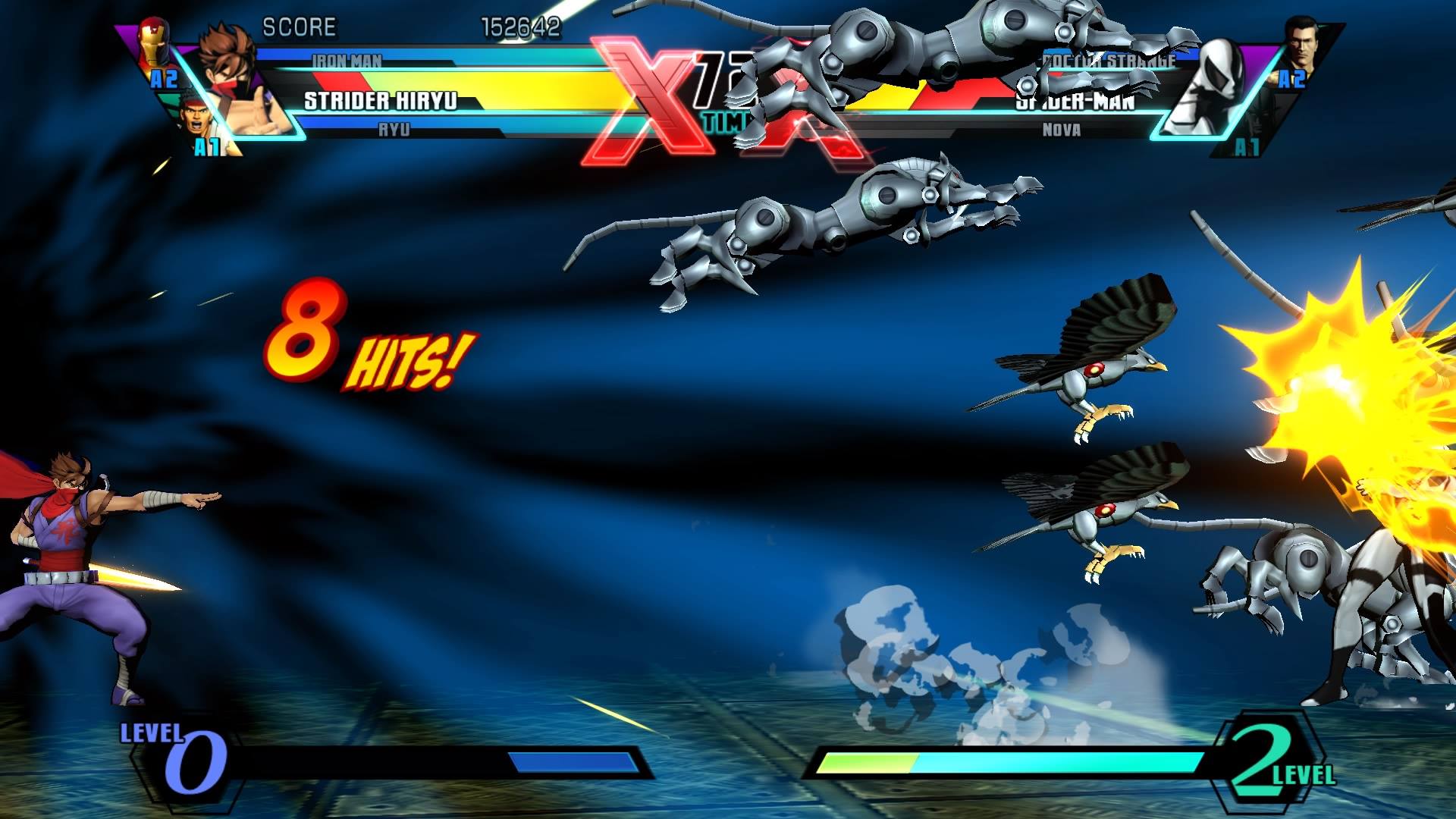 Ultimate Marvel vs. Capcom 3 shows its age visually, but is still as fun to play now as it was in 2011. The single player modes are only entertaining for so long, but the real fun is playing against other people. The only real difference with this version versus the original are slightly-improved visuals and DLC, making it a hard sell for those who can still play it on last-gen consoles, but it’s an easy way to revisit a classic for anyone who missed out on it or regrettably traded in their copy. Ultimate Marvel vs. Capcom 3 is currently a PlayStation 4 exclusive, but is scheduled to come out for PC and Xbox One next March.