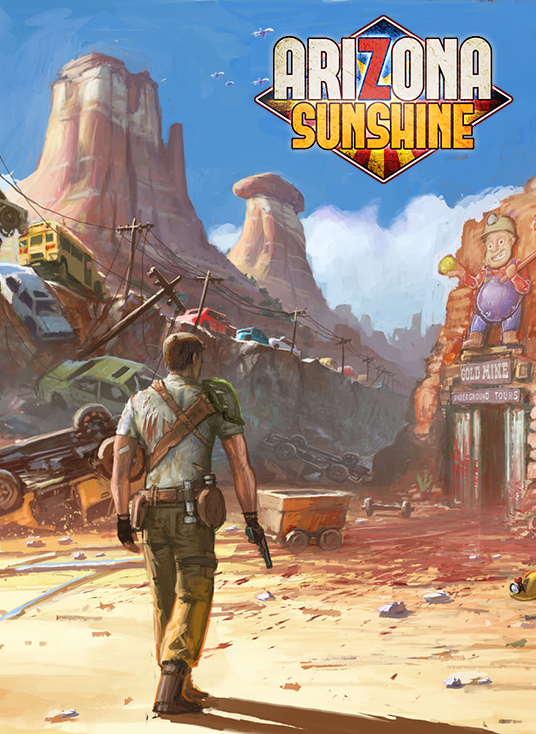 The zombies have risen and destroyed the world again, as they do on a near-weekly basis. Per BAU procedures, humanity has been transformed into a shambling mass of brain-hungry corpses and the survivors can only hope that death doesn’t come in too terrible a form. You’d think we’d be used to it by now, but every apocalypse comes with stories of survivors desperately fighting the odds until they’ve been so traumatized and scarred by the experience that the zombies seem cute and friendly in comparison. Unless you’re basking in a comfy cave in sun-drenched Arizona, as it turns out, because then a perky attitude covers up the constant fear of death and helps keep survival an upbeat, if lonely, experience.

Arizona Sunshine is the story of a lone survivor who hears a brief moment of an actual human voice on his radio and promptly leaves the well-protected safety of home to investigate. He’s named every zombie he comes across “Fred” and has become fairly chatty with them, seeing as he’s got nobody else to talk to. It doesn’t stop him from using the Freds as target practice, of course, but at least he’s friendly while blowing their brains out the back of their skulls. Armed only with a pistol and a positive attitude the survivor heads up the path along the river and onto the road in search of someone who can actually talk back.

There are, of course, a few problems along the way, in the form of plentiful zombies who jump down from cliffs, crawl through cracks in the rocks, and come racing from every direction when they hear a sound. The survivor tries to keep quiet but between the crack of the gun when dispatching random roamers and the beeping, grinding, and occasionally musical old machines it’s hard to keep a low profile. He’s going to have to shoot a couple graveyards’-worth of the undead on his sunny afternoon walk, and there’s no forgiveness for sloppy gunplay.

The action of Arizona Sunshine is almost, but not quite, a VR shooting gallery. Each of the controllers is a gun and you aim and shoot manually, with no handy targeting reticle to magically place the bullet. While you only start off with a single handgun it doesn’t take long to find a second, and there’s plenty of ammo for the two if you keep an eye out for it. Eventually you find a machine gun, grenades, and the wonderful stopping power of the shotgun. Ammo is limited in how much you can carry but as a rule you should have plenty for each encounter, and restocking along the way isn’t hard. You can only carry four guns at once, two in hand and two at holsters on your hips, and ammo is held on your belt.

The ammo belt is a surprisingly strong presence in a firefight. Each gun holds a set number of shots, with a modern handgun having a nice clip size while the revolver only holds the expected six bullets, and the shotgun has an ammo clip on the side showing its three shells. Once empty the gun just clicks uselessly, so you’ll need to hit a button to eject the clip, then bring the gun to your waist for a fast reload. When the action heats up it’s easy to lose track of which gun has how many shots left, but the life of a zombie apocalypse survivor isn’t supposed to be easy and the reload forces a moment of thought into what might have been mindless shooting otherwise. Keep an ear open for the empty-ammo click, aim carefully, and soon the zombie wave subsides and you can continue on your way.

You wander the levels by teleportation, pushing up on the control stick to place a circle and left or right to change the facing direction when you land, then hit A to instantly pop over to the new spot. While it’s hard to do this when facing down a horde of zombies it’s not impossible, and sometimes (rarely) it’s smart to run away rather than stand still and get eaten. The teleport target won’t let you go around obstacles in a single placement, so you’ll need to take a short walk in two or three hops, but for the most part movement is straightforward and completely nausea-free. You’ll want to do more than head straight to the next goal, though, because ammo is tucked away everywhere.

Most free-roaming games let you explore the cabinets and drawers along the way and Arizona Sunshine is no different, but thanks to good use of touch controls you’re reaching out and pulling things open. On the one hand it’s a nice touch of semi-real-world interactivity, on the other you need to line up right so that when open you can see inside, and the movement system is clunky in tight spaces. It also doesn’t help that things with doors almost always want to open right through your face, which can take a bit of getting used to.  The interactivity also extends to a handful of objects in the environment, such as basketballs, cans, large rubber duckies, and a few other items, but it doesn’t apply equally to things you’d expect to be able to move.  Picking up the extras do much of anything, but there’s an inconsistency to what you can play with that’s a little odd. Thankfully it’s not the point of the game, and after a few areas you won’t be bothering with anything that isn’t directly tied to new guns or more ammo. 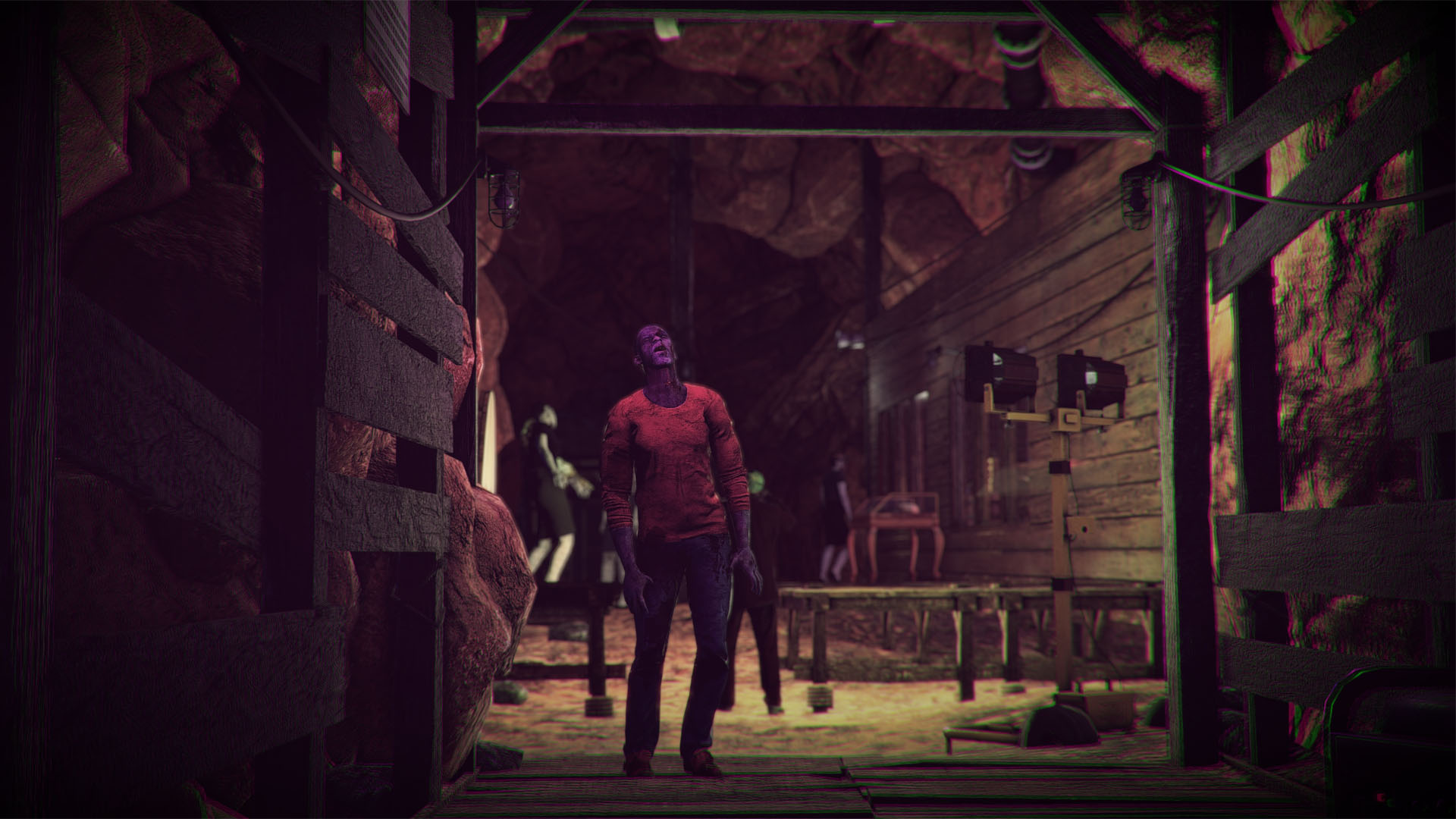 Arizona Sunshine is a decent take on the zombie shooter, hardly revolutionary, but using its tech to good effect. The gunplay is a load of fun thanks to the VR controllers, essentially making each encounter a test of your real-world aiming skills. The standout features are the setting, with its sun-drenched environments, and the surprisingly well-written main character who bounces between humor and fear without overdoing either. The weakest part, though, is a cave area that just goes on too long, but the rest is an adventure through a number of environments that are just lengthy enough to explore without wearing out their welcome. Like a lot of full-VR adventures out currently, the central campaign is fairly short, but extra modes in the form of a zombie-rush horde and co-op multiplayer options help expand the game’s lifespan. Arizona Sunshine brings clear blue skies and a breath of fresh air to the zombie genre, and while it’s not a revolution, the game shows there’s still a little life left in blasting an undead horde into a splattery mess.