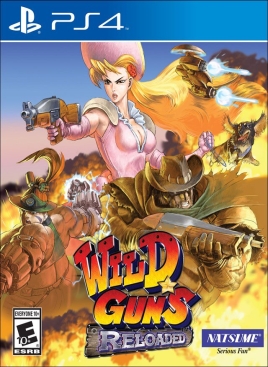 It’s always nervous when you set out to play a video game from the past held in some high esteem, even the cult classics such as Wild Guns. After all, the nostalgia goggles are firmly in play before you even start the game, building up a sort of retroactive hype, so can the actual experience still live up to the reputation created decades ago? Well, if Wild Guns Reloaded is any indication, the answer is yes, it can indeed. It will firmly put a boot in your ass while playing it, but yes indeed. Natsume has revived the 1994 Super Nintendo game with a few new tricks, and the result is a weird and wicked Wild West shooter worth taking a look at.

This being an arcade-style action game from the ’90s, the plot is rather unsurprisingly light. Wild West lady of action Annie finds her dad killed by a gang of thugs, and hires grizzled bounty hunter Clint to help get revenge on said thugs, cue a ton of bullets blowing hundreds away on the road to the leader of said thugs. Of course, the twist is that this is a sci-fi take on the Wild West, where robots and mechanical creatures make up a huge chunk of said thugs and the bullets fire include lasers and energy blasts. It’s a strange new frontier indeed, and one that ends up being quite the unique adventure.

And true to its aforementioned arcade-style roots, the gameplay in Wild Guns Reloaded is the type that’s incredibly simple, yet highly fun and easy to play with. Similar to other arcade games such as Cabal or NAM-1975, you control your character in the foreground with their back facing you while enemies pop out in the background as you move around and aim via a crosshair, trying to hit them (or throw a lasso to freeze them for a bit) while dodging any attacks via double-jumps and dives, not to mention the bit of “Look Out!” text appearing by your character when something’s heading their way to be on alert for. You can grab additional power-ups that appear along the away for different types of ammo or treasure to add to your score, which you have to build up to gain extra lives as well. So as you may have guessed, the screen easily gets filled up with a ton of action that you have to pay attention to quickly, which makes for some real excitement. 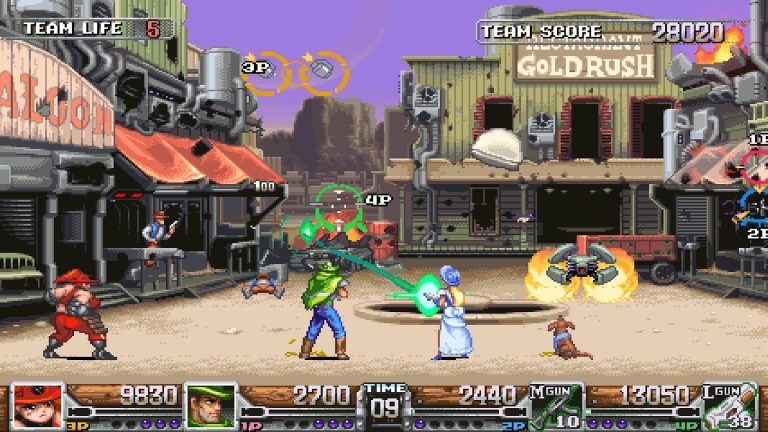 The revised version here is notable for the addition of two new characters, Doris and Bullet. And while Clint and Annie have some slight differences in how they each play, things are notably different for these two. Doris is a large woman who throws explosives that deal heavy amounts of damage and have a a larger blast radius, at the cost of being a slower character with no automatic fire or different types of ammo, and Bullet is a Dachshund with a piloted drone that shoots for them and automatically locks on all enemies in a single area, but becomes temporarily unable to fire if the drone gets hit. They are a unique pair to play with indeed, each bringing a unique and fun set of skills to the table, with the two also seemingly doubling as an Easy Mode (Bullet) or Hard Mode (Doris). One letdown is that Natsume sort of forgot instruction manuals aren’t included this time, though, so you have to figure out a few things yourself when it comes to the new kids (and the game in general if you aren’t fully familiar with it), but there’s nothing too difficult.

It might shock you to learn that a Natsume game from this era has some ridiculously good pixel art, but you’d be surprised just how good it can be (especially with an HD upgrade). The idea of science fiction mixing with Westerns is explored to its fullest here, from giant mechs with cowboy hats to futuristic mining equipment, robots tunneling like prairie dogs, and cowboys riding on actual steel horses (who are no doubt wanted in either a deceased or still-living condition). The character designs are inspired and incredible (the larger than life bosses being a true highlight), and populate some outstanding levels as well, which are all nice and vibrant with a ton of detail and destructible scenery to boot. Neon signs can be shot down, tables will be busted, dents and holes from bullets will appear in every surface possible…this was all impressive over twenty years ago, but is still just as impressive today. 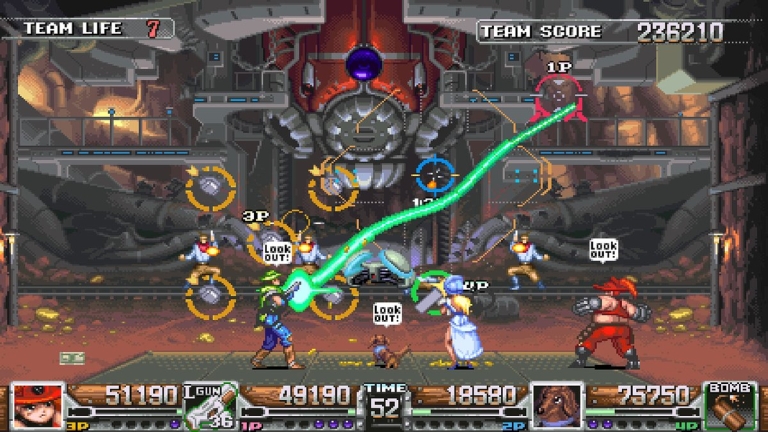 The new stages added to the game also have the same spark of creativity (Three words: Enemies on pennyfarthings) and amazing graphical quality to them, but particular praise must be given to the Underground level with its haunted house theme. Enemies dressed as reapers fling molten metal at you with their scythes, Jason Vorhees-style villains creep up on you, and goons use groups of life-size costumed poppets as disguises in an area where low visibility requires you to light up the darkness with gunfire to see anything. Some absolutely terrific design indeed. But, as it turns out, getting to some of these “reloaded” elements in Wild Guns Reloaded may require some work, as the new levels are only available on the Normal difficulty or higher. That may sound standard, sure, up until you realize that the Nintendo Hard level of difficulty is still very much in effect here.

Yes, Wild Guns Reloaded is still very much hard as a rock. All it takes is one single hit from any bullet to take out one of your lives, and once they’re gone, you have to repeat the entire level over from the very beginning. And if that wasn’t enough, much like back in ’94, you have to complete the whole game in one sitting. This is somewhat remedied by a full playthrough only lasting a few hours at most, but you do have to wonder why a save system (or heck, even a password system) still wasn’t implemented for this new version. Those up to the challenge can get rewarded with the likes of a “Retro Sounds” option for beating the game without continues, although the soundtrack the game already has is quite stellar, delivering some perfectly fast-paced 16-bit music for such an action-packed game. 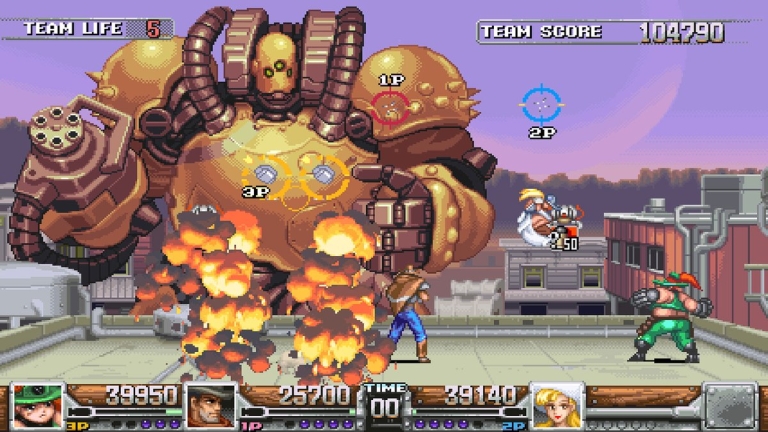 Wild Guns Reloaded may be a splash of cold water in the face reminding you of just how hard games from the 8-bit and 16-bit eras could be, but it’s also a reminder of how damn fun and enjoyable they can be as well, proving that some titles are indeed timeless. The graphics still have the same stunning impact, the action is still fast-paced, and the new additions are welcome indeed. It’s not just a trip down Memory Lane, but also a section of it that deserves a chance to be rediscovered, to let the world look at a bit of a hidden gem. And if that hidden gem was plucked out of a gold mine where a dachshund blew up a twenty-foot robot crab after shooting a dozen or so scuba divers armed with explosives, well, that only makes the gem shine brighter. Clearly.