We all want licensed games to do well; there’s not a single [sane] soul out there who doesn’t. More specifically, it’s movie-licensed titles that often hold the greater presence (if not promise) and with it comes an ever-growing catalog of some really good tie-ins, but more often than not those that…well…don’t quite meet expectation. To narrow that down even more scrutinisingly further, you can count the amount of great horror genre licenses to do well in video game format on one hand. Alien: Isolation naturally comes to mind as does its rather less pleasant predecessor to hit home this polar opposite reputation. Whether this is what’s driving Illfonic & Gun Media’s joint effort to bring Friday the 13th back, or whether it’s the popular trend of asymmetrically-structured online multiplayer as of late…possible cynicism aside, the cult horror franchise has been rather absent for a while — only a Commodore/Spectrum title and a mobile phone game nearly a decade ago mere whimpers compared to fellow horror giants Alien or Predator…or Alien vs Predator in terms of release numbers.

Though Friday the 13th: The Game (to give it its full and proper title) will come with a single-player aspect — which coincidentally is one of the reasons behind the project’s delay, with work having originally commenced in 2015 — players have been given the opportunity to jump into what the developers describe as the Beta to the primary multiplayer aspect of the game. A 1 v 7 arena-style, survival horror in which one character plays the series antagonist, Jason Voorhees, while the other seven play counselors trying their best to survive and, hopefully, escape Jason’s axe-wielding, rather-bloodied clutches. The premise sounds relatively enticing and interesting to take part in, regardless of whose shoes you find yourself in. And if we’re going to start things off on a plus, there’s little doubt Illfonic/Gun Media have given considerable attention to not just the World environment, but how that also plays into the mechanics of both a innocent victim and the mass murderer menacingly making another one of his rounds. 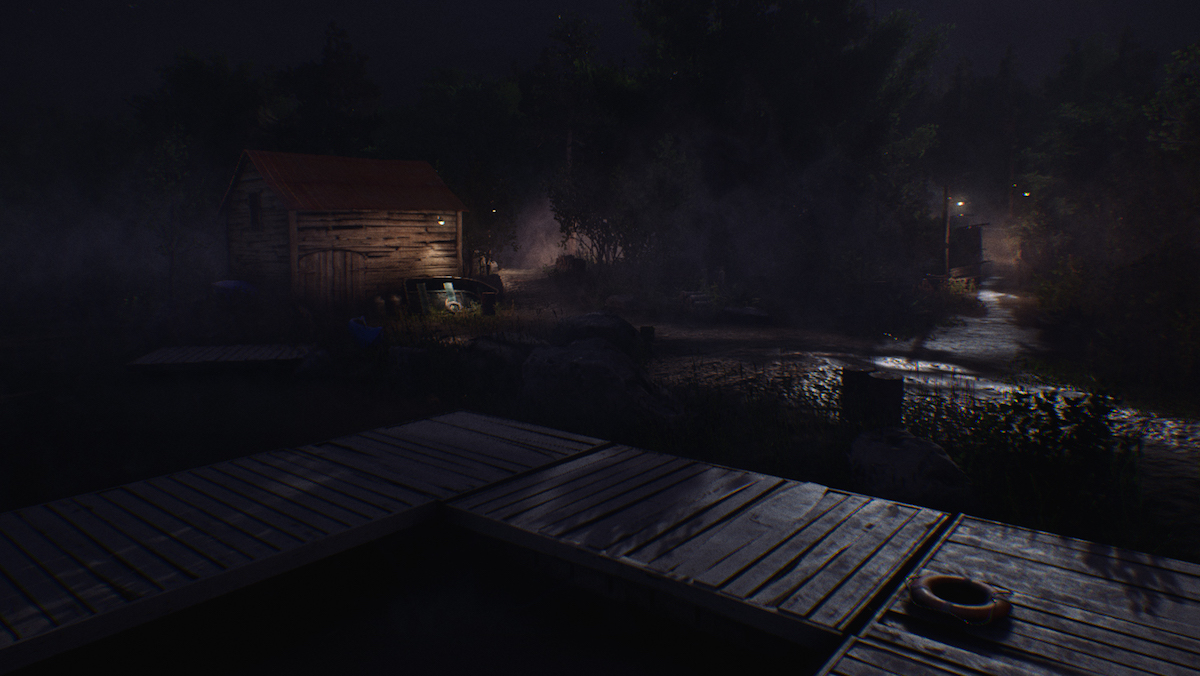 One of the notable highlights about the multiplayer, when it comes to how each match plays, is the relatively varied assortment of locations and opportune hiding places on show when it comes to playing as one of the counselors. On top of the numerous buildings on show, at least from the solitary map offered up in the Beta, there’s a high amount of foliage and natural features to hit home the idea the environment can be as much a benefit as it is a hindrance for both Jason and his victims. Of course, this feature alone doesn’t do much to add intensity or a sense of sudden dread and it’s here that the gameplay mechanics truly come into play to surprising effect.

It would be easy to leave Jason as this overpowered entity on the map; some may even argue going against that decision would itself go against the idea of a horror villain being this ominously inescapable threat. But for the sake of balance in video games, Illfonic/Gun Media pull off a cleverly good job at, while leaving Jason all-but-deadly, making counselors naturally disadvantaged. To quote Metal Gear Solid 2 here, they should be weak, but far from powerless. While it’s a certainty (a lucky hammering of a QTE aside, allowing you to break free of Jason’s clutches) that players will die should they get caught, resulting in one of a handful of customisable death animations — from eye-gauging to crotch-shots alike — there is the opportunity to equip one’s self by way of finding make-shift weapons (or in some cases, literal weapons in the form of a single-shell shotgun) to put up a fight should the player controlling Jason find them. Be it a full defensive stance to reduce damage or a bold counter that leads to, best case scenario, staggering Jason back, though players do at least have a means to defend themselves, it’s regarded less a strategy to invest in and more a blatant last resort should things get a little too close for comfort.

The added consideration of the risks on show also comes through with the variety of objectives on show that stand as the only means players have in order to escape and technically “win” the match. Be it fixing a telephone line and contacting the police — requiring some careful stealth and then desperate final sprint to one of a series of dedicated exit points on the map — or finding three components to one of two cars (placing the car  battery resulting in a QTE that, should you miss one step, results in Jason seeing you on the map), the necessary “balance” from the counselors side is indeed there, but isn’t thankfully as upfront as you would initially expect. Consider it a clash between brute strength on one side and smart’s on the other. Where Jason’s size makes him unable to climb in and out of windows, counselors can not only use a building’s numerous exit points, but can also lock/barricade doors to further obstruct Jason’s rampage. 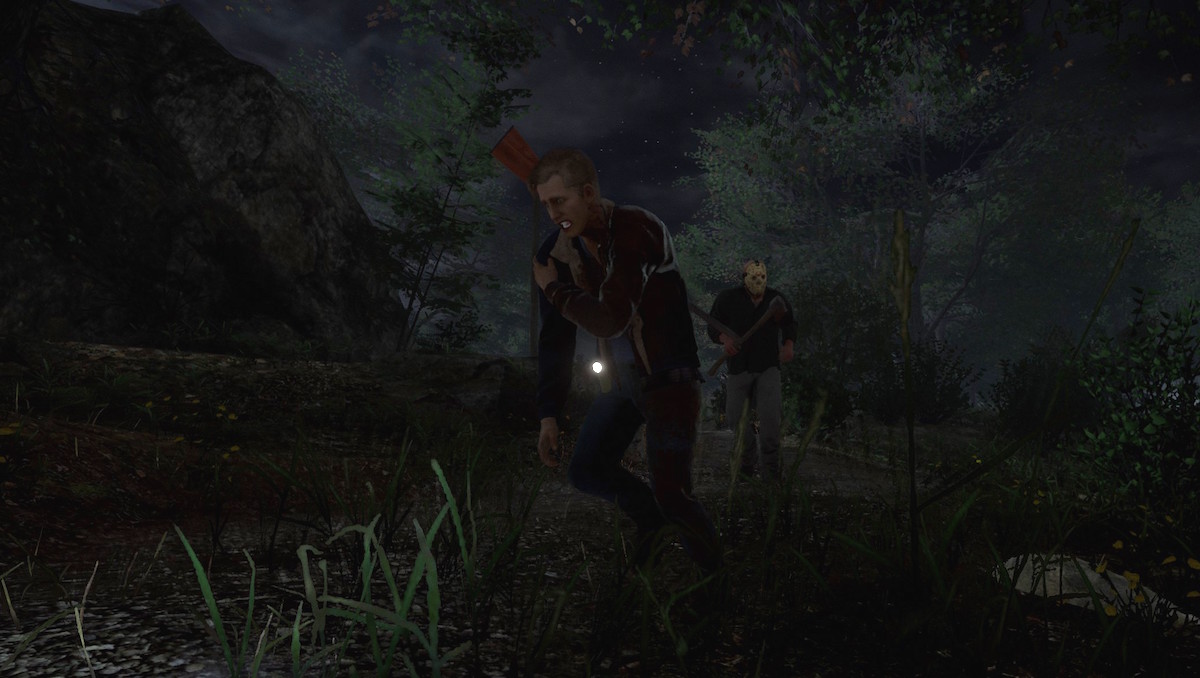 By contrast, Jason’s terrorizing, if sluggish, pace and hindrances in the physical agility department, is aided by a series of supernatural perks that add a rather unpredictably tense dread to proceedings. Be this including (video game industry standard now it would seem) the ability to see through objects — which itself is countered in the case of buildings of only highlighting the presence of someone though not specifically pin-pointing — or a rush skill that turns you invisible and lets you breeze across terrain for a brief period, potentially getting the drop on a unsuspecting player whom is under the illusion of safety. It’s just a shame that there’s no clear indicator to notify the cool-down period has finished — adding potentially greater annoyance given Jason’s pace and the asymmetrical nature of possible counselor tactics. At the end of the day, the player controlling Jason can only win if all other players have been killed.

Abilities and accompanying weaknesses can of course be altered, albeit initially, via the game’s assortment of counselors — and in Jason’s case, the numerous movie versions that have appeared. In the former case, characters have differing ranks in strength, speed, stamina and even immunity to fear which plays a critical part given Jason’s detection perk is based on how fearful counsellors are; a result of being out in the open dark for too long and not finding lit interiors to take brief shelter in. Other options such as temporary perks (be it starting matches with certain items or percentage increases to certain abilities) and the option to customize clothing — though inactive during the Beta period — at the very least open up potential avenues of differing “load-outs” of a sort.

Sadly, the game’s lack of UI notifications is but a minor gripe compared to some of the Beta’s rather more apparent rough edges. And this wouldn’t be a beta without a significantly glaring lack of polish and quality control in certain parts of the visuals and in Friday the 13th’s case, it’s unquestionably found in the character design and indeed the accompanying facial animations. The fact each match begins with the same introductory scene-setter: counselors meeting up ’round a campfire; one poor soul unfortunately getting an axe to the back, complete with laughably devoid expressions and stock running animations from the rest…only goes to underscore how far this project is off from being a fully polished experience just on visuals alone. Because for all its tense gameplay and surprisingly balanced opportunism for players on both sides, Friday the 13th, one could argue, is short even of deserving the status of Beta. Hence mentioning the developers’ own interpretation of this as a “Beta”. 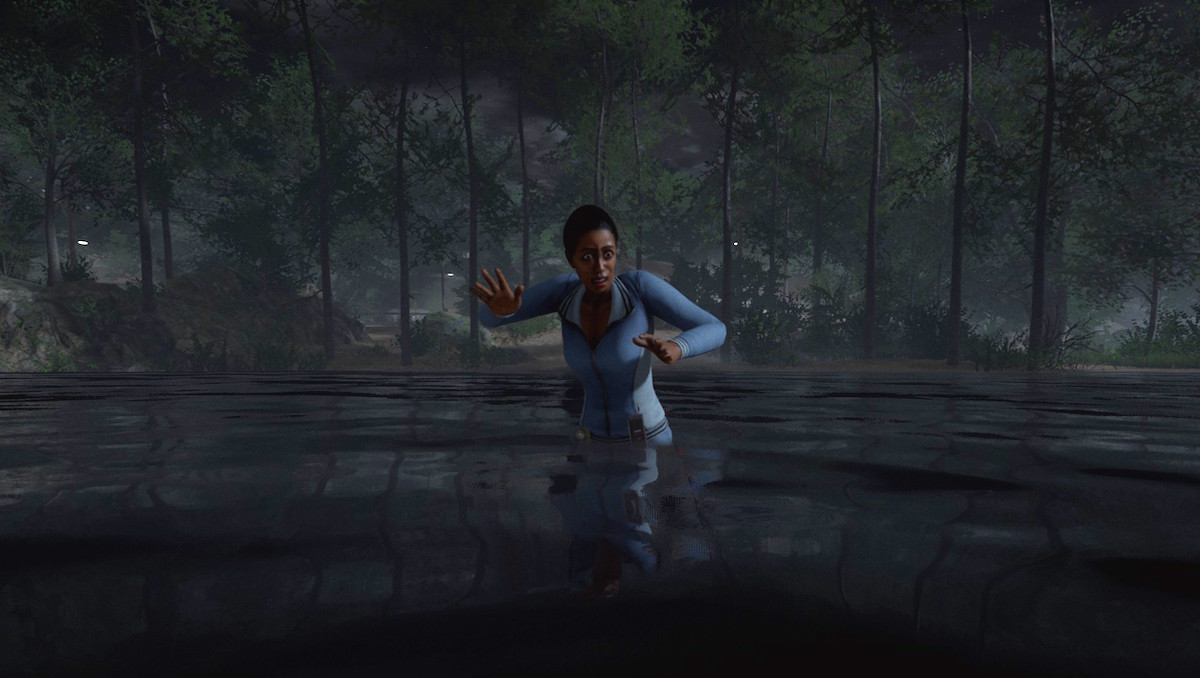 At its worst, character models have about the same level of believability and stature as ample amounts of Early Access survival games built from some Unity asset package or the like. But again, character models are just one of the Friday the 13th‘s three critical low-points — a stark reminder of the game’s accumulative weighing up of promising mechanics and, ultimately, questionable general performance. Speaking of performance, taking it from a very literal sense, Friday the 13th has a way of throwing frame-rate into a dizzying spin. Playing this on a GTX 980, juggling between highest and second-highest settings all-round, the game tosses between high-70’s and mid-30’s at the worst of times and especially in moments of frantic decision-making can result in a very clear degradation in performance, despite the respectful visual style and 80’s aesthetic on show. Thirdly, the game is currently riddled with a frustrating amount of lag and temporary freezing which, for a game all about short-term strategy and adapting to the unfolding scenario, can make the experience feel even less winnable, regardless of whose shoes you’re put in. A unreachable swing of an axe or contextual prompt somehow making contact makes for some uncalled and horrific surprise…but sadly not the beneficial type.

So it goes without saying that for all its potential with its thoughtful mechanics and considered balance of perks — between the strength-orientated Jason and the agility-minded counselors — Friday the 13th will ultimately be judged, come final build, by the strength (and indeed integrity) of its online functionality. While it’s promising to be in the situation of playing with fellow countrymen, Americans and New Zealanders all in the same match, only to have the match impacted by back-end server issues, is disappointing though not, thankfully, entirely damaging to the game’s promise as a unique online multiplayer title. The fact the developers nail the unshakeable fear of dying in something as simple as playing a counselor trying frantically to flee a looming Jason-player in the backdrop, proves how effective a horror-leaning multiplayer title can be. It may be unlucky for some, but at its heights, combined with the promise of fixing some technical elements, Illfonic & Gun Media’s efforts warrant a second return come the inevitable release of Friday the 13th: The Game. But for starters, you might want to fix those hideous character models/faces.