Some moderately successful franchise called Diablo recently celebrated its 20th birthday. In honor of this significant event that likely makes a lot of us feel old (myself included), Blizzard has placed some special features in their games. Celebrating Diablo across multiple games creates some fun temporary events for January and can serve as a reason to go back to a game that we have played to death but have been neglecting. For example, World of Warcraft will be getting its own version of the classic killer cow level, which kind of makes me wish I played WoW. Diablo III receives its Darkening of Tristram event, where players will get to play through an homage to the game of the hour. So the question is whether or not this event is firing up this game again is worthwhile for this event, and the answer is yes, and not only will we discuss why but also provide an unnecessary guide on how to maximize one’s time in ye olde town of Tristram.

The Darkening of Tristram places a quasi remake of the original Diablo that can be accessed in Act I in Adventure Mode. There is a portal marked on the map not too far from New Tristram in the Old Ruins that teleports the player to the ruins of Tristram, which looks about how it was last seen in Diablo II with ruined buildings and the corpses of familiar faces such as Griswold and Farnham strewn about the ground. And cows. We mustn’t forget those poor cows that everyone most likely tried to kill in vain in our first visit to Tristram, for the minions of hell have succeeded where Diablo players have failed. The most noticeable changes to the visuals are the character now walks instead of running, just like they did in 1996, and there is a filter over the screen that gives this event a proper retro look. 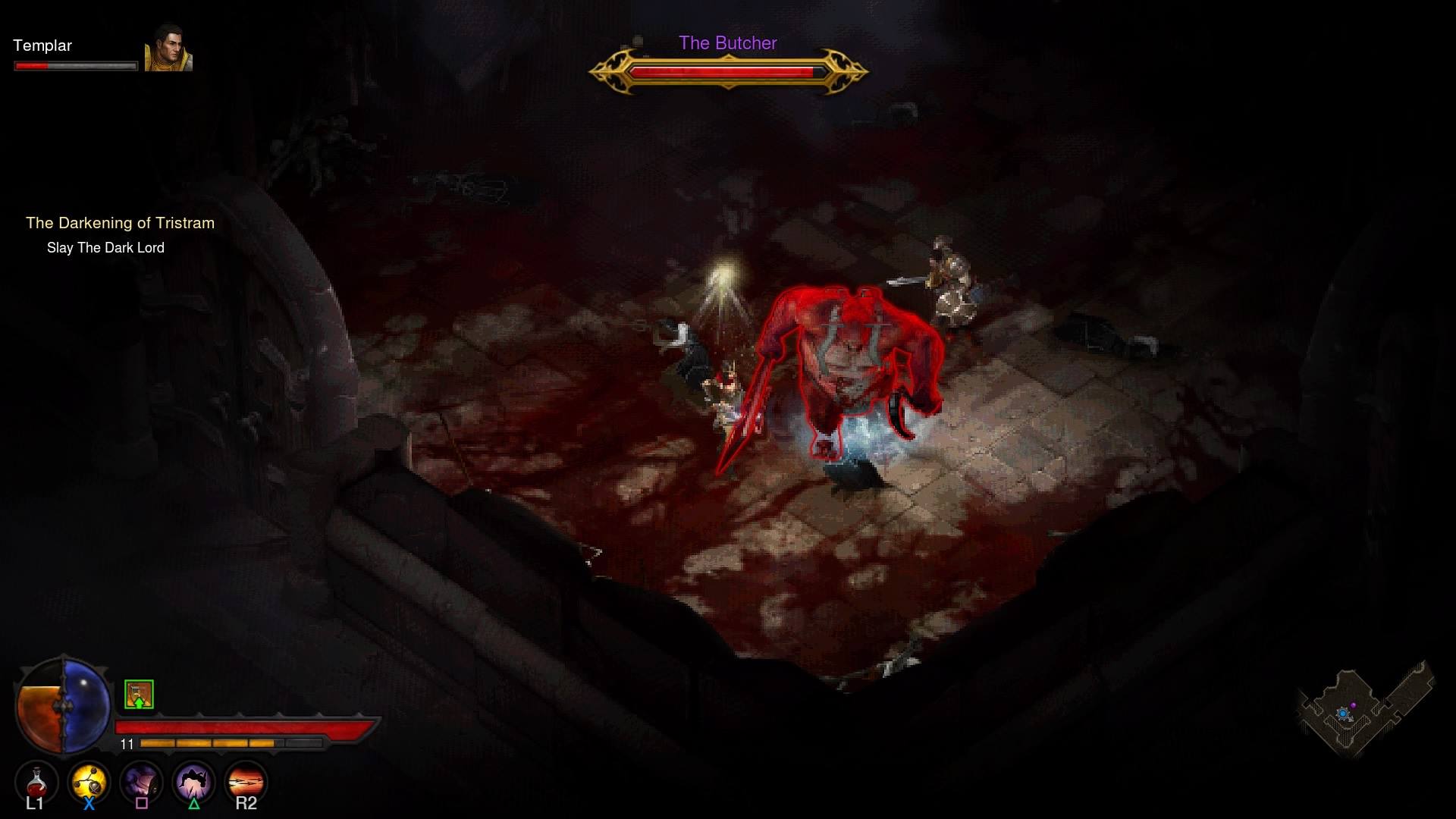 Further exploration of this ruined town takes us to the labyrinth, where we must venture in and kill The Lord of Darkness. This labyrinth is 16 levels of old school Diablo doom and gloom. Your Diablo III characters will be free from the divisive WoW inspired colorful palette that drew the ire of fans when screenshots were first revealed and will be in a dungeon surrounded by fifty shades of grey (what did you think the Butcher needed those chains for?). The monochrome environments and filter effect can almost fool someone into thinking they were playing the 1996 classic if it weren’t for the pyrotechnics from the character’s skills that would make John Woo feel woefully inadequate.

Delving deeper into this nostalgia fest long Diablo veterans will encounter and kill familiar faces like the Butcher and Skeleton King. The labyrinth’s design doesn’t really change much until the player reaches level nine, where instead of a typical dungeon setting the player finds themselves inside a cave that grows some mushrooms far more foul than what can be found closer to the surface. This is where it is time to take a break from reaching the bottom of the labyrinth and paying a return visit to the ruins of Tristram. The Diablo franchise has always had a rather odd fetish with bovine folk, and this is the part of the article where I guide you on how your character can get their own baby cow. 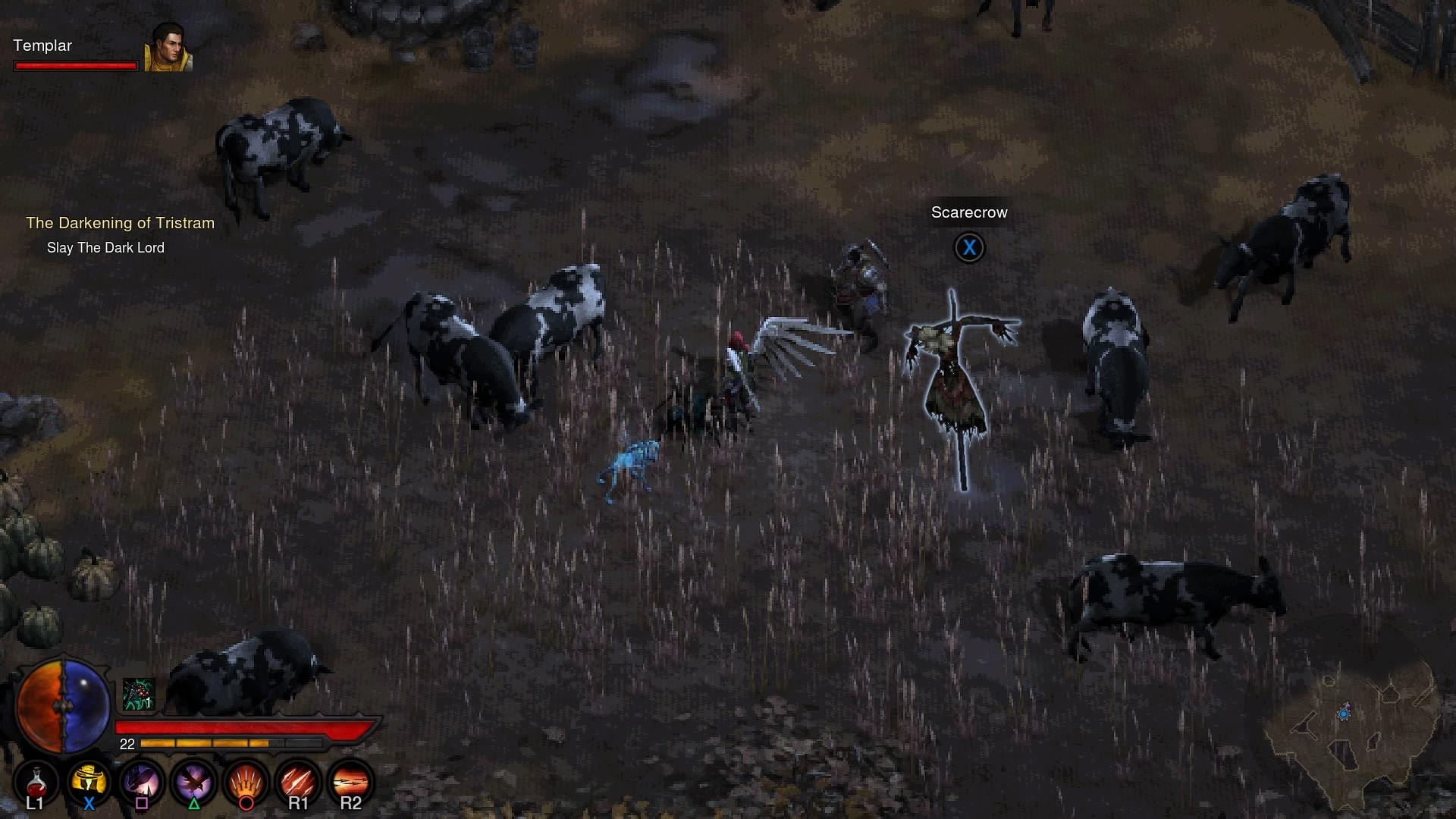 Returning to the ruins of Tristram, near the three cow carcasses is a cauldron where those recently acquired nasty mushrooms can be turned into a potent witch’s brew. I know this is a tall order, but do not mess with those cow carcasses for now, we can play with them shortly but first we have to visit our dear dead friends. There is a specific order that needs to be followed when visiting these dead folks, and the first corpse we visit is the good old resident drunk Farnham, which gives us the Drunkard’s Debt. This needs to be taken to Ogden, which gets us Garda’s Letter. Taking Garda’s Letter to Pepin nets a Healer’s Prescription. The Healer’s Prescription contains a rather morbid recipe, which is the schematics for a child’s wooden leg. I think we all know where this is going. Go visit the corpse of Griswold, and the plan for Wirt’s Leg is yours.

Now it is time to go visit the living blacksmith in New Tristram and make us a nice new peg leg. The pint sized prosthetic costs 1,000,000 gold coins and a negligible crafting material cost. Wirt’s Leg is a legendary mace that is just as effective in battle as one would expect. After feeling somewhat hornswaggled by this overpriced item the natural thing to do is break down the leg through the salvage bench and discover that a Map of the Stars somehow made its way inside Wirt’s Leg during its construction. Now it is time to go wrangle us some dead cattle, as the Map of the Stars tells us what order we need to desecrate these bloated bovine bodies. The two one three progression on the map is not in reference to writing a dissonant rock riff but when decoded this message means to touch the cows in the order of middle, left, and right, which sets the cow spirits free and opens up the pathway to a farm filled with cattle that cannot be killed (I tried) but does unlock a pet baby cow (Editor’s Note: You are aware a baby cow is called a calf, correct?). This baby cow, which I named Sally, seems to serve no function other than you get to look at a baby cow following your character around, but pointless fun is still fun. 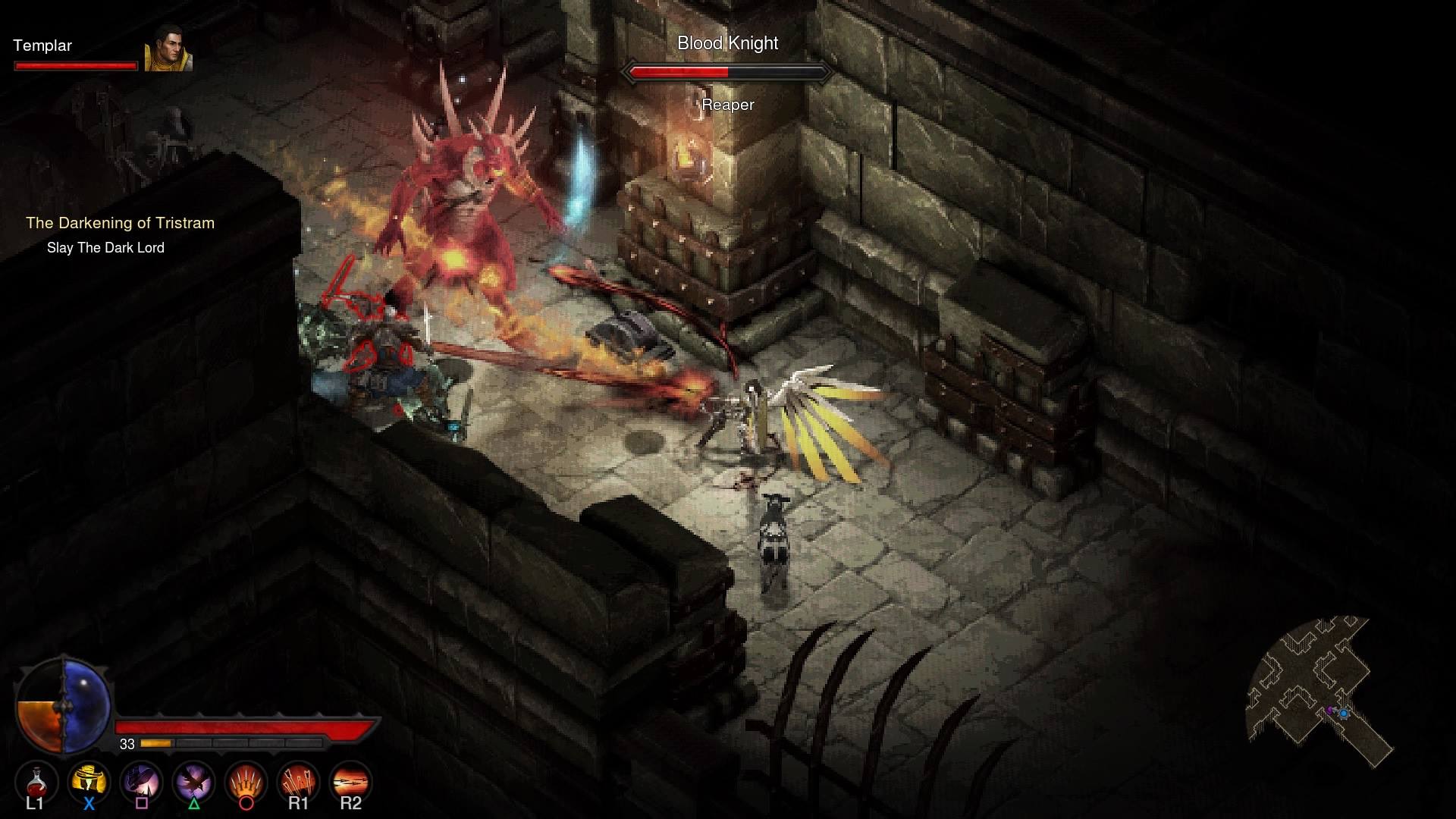 Back to the labyrinth with the miniature mass of unprocessed steak and burgers in tow, the scenery returns to the grey dismal dank dungeon after we travel down a few more levels. Lazarus and  The Dark Lord await us at the bottom, and upon slaying the ultimate terror that lurks on the bottom of level 16, we are treated to a movie that has the look of something made with the most high end video rendering technology from twenty years ago, which is a fitting conclusion. The Darkening of Tristram takes only a couple hours to complete, and it is nice to see a tribute to the original Diablo. Long time fans of the series can enjoy the nostalgia fix the semi recreation of the original game, while players who might be too young to have played the original can get a taste of what it was like. All in all it was a cool little event, and worth playing for both new and old fans of the series. The biggest hope is that my bovine buddy remains a companion after The Darkening of Tristram comes to an end. And for those who do not want a little cowling following your character around, complete this event with a brand new character and you will be rewarded with a Gary Coleman sized version of the Butcher.