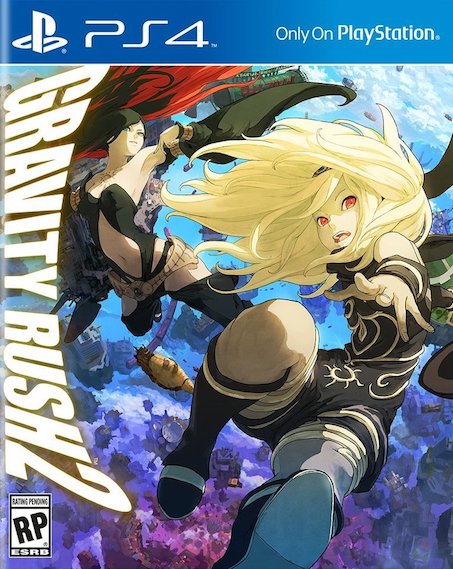 Much like the Wii U, the PlayStation Vita can at times find its acclaimed line-up of software overshadowed by the less-than-stellar commercial performance of its hardware. Severed, Danganronpa and Legend of Heroes’ Trails of Cold Steel sub-series all gained significant followings on Sony’s handheld and while some may not be exclusively Vita-bound, Japan Studio & Project Siren’s acclaimed action-adventure Gravity Rush was equally quick to gain cult status but also land itself a place among PlayStation’s growing roster of recognizable and enjoyable IPs. Less than a year after the original’s PS4 remaster, Gravity Rush 2 sees the series get its first real flourish on current-generation hardware. The very idea of a once Vita-only title getting a proper PS4 follow-up may well be surprising in of itself, but those coming into this home console outing expecting a drastic shake-up may well have to temper their expectations.

While Gravity Rush 2 certainly builds on its predecessor as far as scale goes — its multi-dimensional tale hopping between new and old locales alike, a game nearly three times greater than its predecessor — a lot of what makes the game shine is what carried the original through previous. Despite there being plenty of returning features and characteristics, one of Gravity Rush’s greatest strengths, ominously present in the sequel, is the intrigue and fascination garnered by the locales on show. From the very early moments of the game’s 20 – 30 hour campaign, it’s made abundantly clear that Japan Studio/Project Siren have put great emphasis on the visual spectacle on show, ensuring said environments are well worth the resulting player distraction, if not the variety of objectives accompanying it.

Like Hekseville before it, Gravity Rush 2’s primary setting of Jirga Para Lhao shines because of its attention-to-detail and elaborate labyrinth-like structure in parts. Floating isles and self-propelled citadels alike offer a setting you can easily find yourself waste hours simply whizzing in-and-out of with your trustee gravity manipulation powers. Whether it’s in pursuit of few dozen/hundred more gems — of which there are a lot more of — or just merely to take in the spectacle, Gravity Rush 2 may not be going for the hyper-realistic approach in its presentation, but its mix of cel-shaded character models and classic Japanese animation to drive home its environmental aesthetic, make for some striking scenery and equally prevalent set-pieces at the more critical moments in the game’s story. From vibrant South American-influenced towns and spacious upper class estates to congested slums and even high-rising apartment complexes, the multiverse of Gravity Rush 2 seldom let’s itself go unnoticed despite, on a technical point, its over-reliance on motion blur (to mask its frame-rate most of all) and the use of film graining during the most daring of trips. 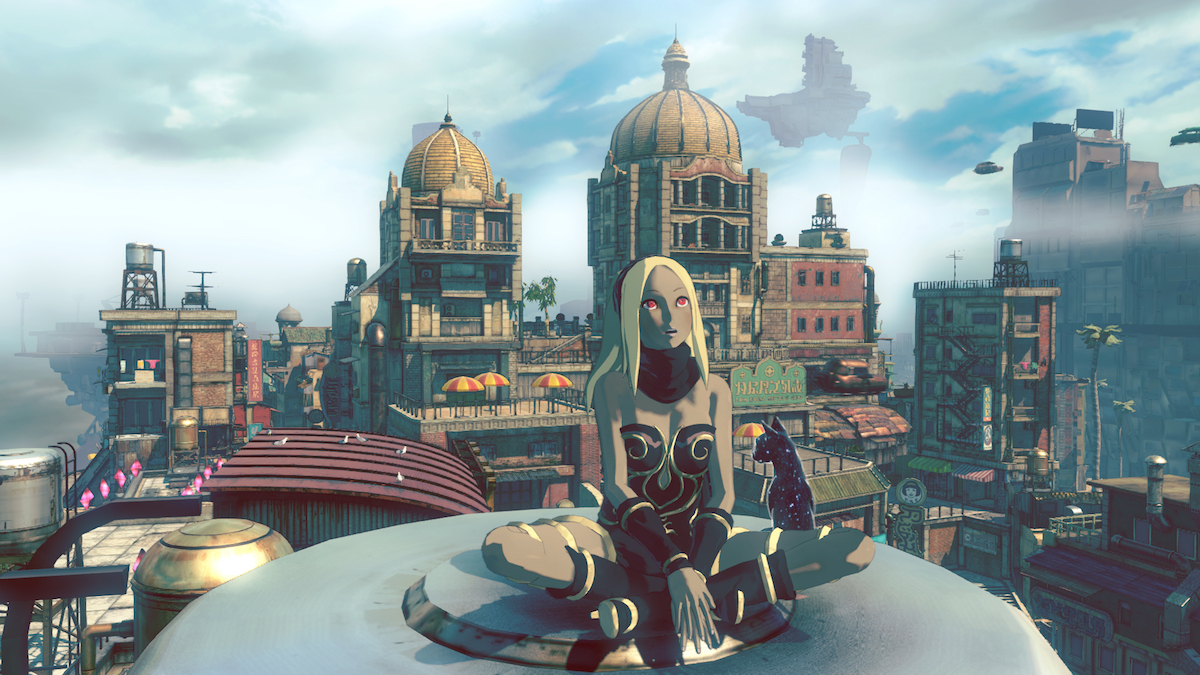 Even with its obvious 30FPS cap, which some may see as an unwelcome off-put, there’s very little aside from the cosmetic visual crackle (like watching from an old film reel) that detracts from the genuinely simple pleasure of flying between settlements and like its predecessor, Gravity Rush 2‘s greatest strength is the simplicity in these gameplay mechanics. Once more, manipulating gravity comes by way of a simple tap of the R1 button, allowing you to “free fall” in any direction thus allowing you to cover great distances with literally no risk to your accompanying health meter. Combined with the fact Kat’s gravity energy self-recharges after a few seconds of deactivation and it becomes abundantly clear that the game makes no attempt to punish or otherwise restrict the extent to which players can freely navigate the skies. The very fact that all four of Lhao’s key areas are accessible from the get-go — much like later areas in the story — is a change from the original’s closing-off of certain sections during early periods of the game.

And a pleasure it most certainly is to merely move about the World out of humble curiosity; some will be surprised, as noted, how many hours will ultimately end up self-allocated/wasted outside of the game’s main story, unknowingly treating Gravity Rush 2 less like an action-adventure with an intended narrative and more like a sandbox to play around in. Whether you take to the experimental ways of gravity or casually venture around the multi-layered sky — in-between delving one’s self into floating islands with, at points, a surprising amount of artistic and structural depth — there’s a definite Wind Waker vibe that permeates Gravity Rush 2‘s design. Watching as you do distant, darkened silhouettes slowly materialise into nearby, accessible locations. 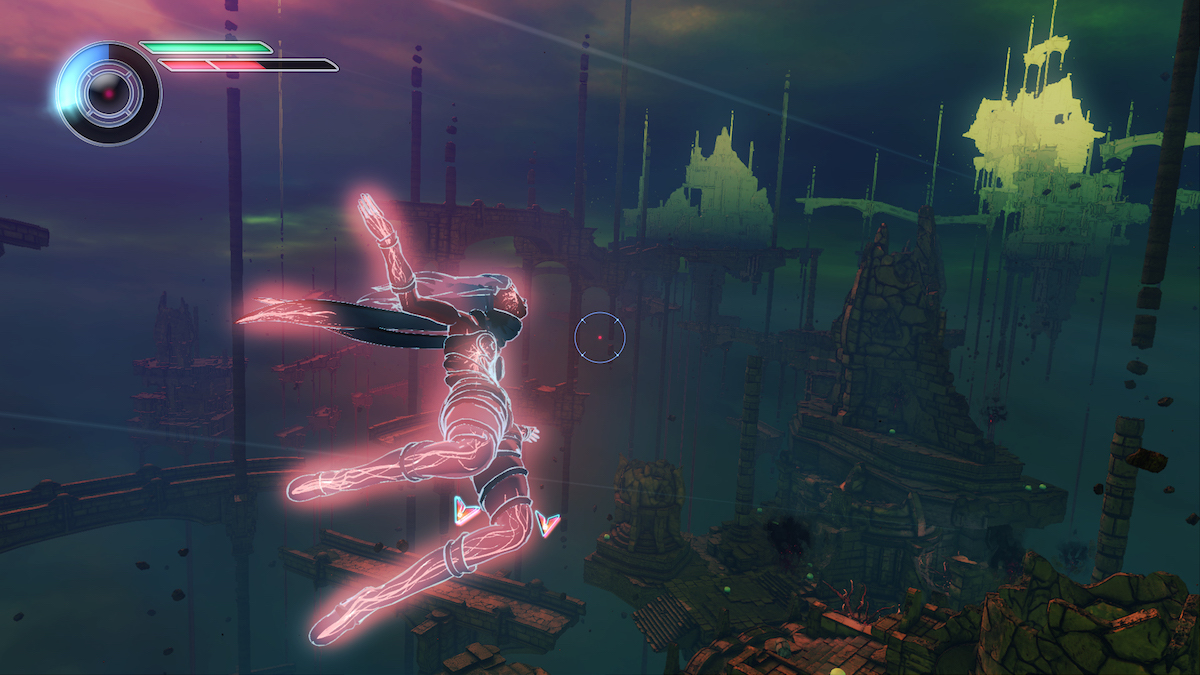 Yet to elaborate on the technical side, despite there being no loading screens within the environments themselves (or at least those blatantly obvious to spot) the game is not without its occasional performance-based mishaps. Whether it be textures suffering from taking just that bit longer to load in on a particular piece of ground, or the odd NPC or two happily clipping through objects on a particular street or platform, the game does indeed rear a few rough edges from time to time despite all the vibrancy and careful choice of tone in its visual components. The drastic shift in atmospheric color and shake-up of weather (particularly the density of cloud cover and fog; akin to how Mafia 3 rendered sunlight and the presence of cloud cover in very peculiar ways) can too potentially break the laid back mood.

But the biggest woe sadly — and a criticism that too, unfortunately, carries through from the original — is the camera work which, at its worst, fails to keep track of one’s shifting of gravity when up against a tight corner or during a more frantic encounter with a foe. At one point in my play through, coming across one of the more grandiose set-pieces via a boss fight, the camera ended up stuck in the environment due to the very nature of the in-game gravity mechanics.

As a result, Gravity Rush 2 succeeds more as an adventure than it does in its action counterpart of which is built on compartmented chapters/episodes — specifically-dotted quest markers the only means to progress the story. While the combat may not provide the most sophisticated or even in-depth of systems, despite the upgrade menu getting a striking visual make-over and mechanical expansion in order to cover main-character Kat’s slightly more increased range of abilities, quests themselves can at times leave a lot to be desired. Though the game will at points shake proceedings up in interesting ways, be it incorporating more strategic stealth segments, have you scour specific isles for a certain object/NPC, or simply delivering a set-piece or critical moment in the story that’s genuinely fun to watch, players may likely catch wind of the overuse of fetch-quest’s and repeated back-and-forth’s in-between such high’s and deem it a little off-putting at best and taking up far too much game time at worst. 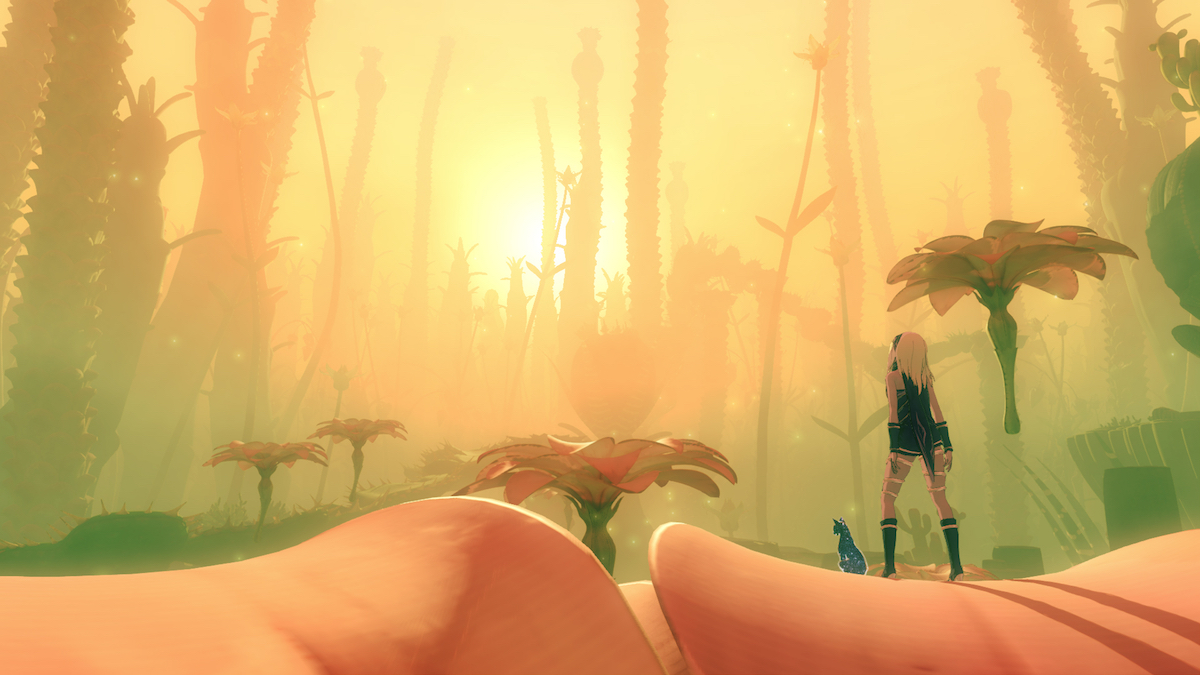 Had this been confined to missions predominantly out in the open environment though, the concern regarding Gravity Rush 2’s pacing or indeed use of the player’s time, might not have felt as worthy of highlighting. But unfortunately the game at points seems to take great stride, especially by the half-way mark, to intentionally and artificially stretch out the run-time for the pure sake of it. Such segments come in the form of particularly closed-off, arena-like moments where upon glowing tablets will instruct you to meet certain criteria like kill x amount of enemies or find a certain number of gems within a confined space before the game will allow you to progress onward. Eventually there came a point, especially in the build up to a boss fight where these challenges soon overstayed their welcome and the completion of a stage/chapter felt more like warranted relief than due satisfaction — interesting level/boss design and implementation of difficulty notwithstanding.

The return of optional side-missions and even challenges do fortunately, to counter this, offer some breadth of content and opportunity for players to fully master all manner of gravity mechanics on show — some latter challenges even requiring a combined know-how with speed, co-ordination and awareness of where everything is laid out to come out with a gold ranking. It’s here in the challenges where the real creativity in objectives truly shines, sorting novices and experts of the main gameplay mechanics apart. New modes including an asynchronous multiplayer aspect (whereby players can compete against other’s ghost data in score or race challenges), a gem crafting system and mining areas that offer rarer gems that can be equipped at the cost of harder enemies to defeat, do at least expand potential investment though in the long-run compliment the game in a much less sufficient amount. That said, the new photo mode — one of its features being the ability for players to send visual hints/cues to others online as to the location of hidden treasure chests — is surprisingly effective in its novelty. 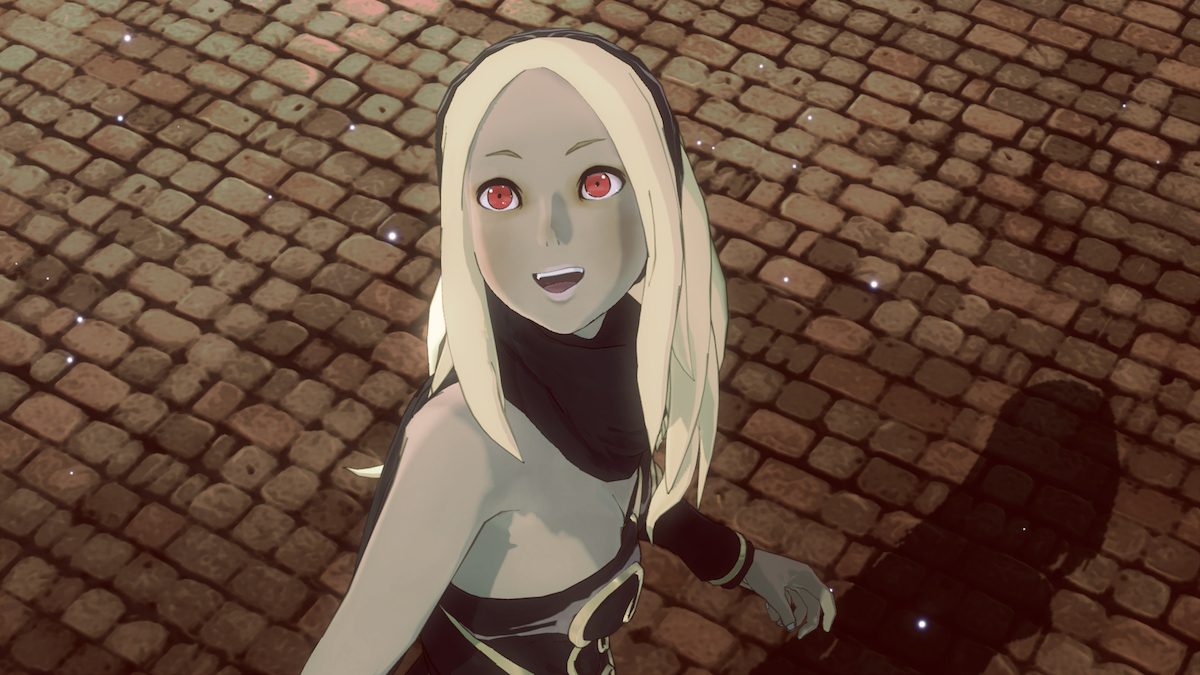 “More of the same” could very well be the simpler way to sum up what players should expect coming into Gravity Rush 2. While the gravity-shifting mechanics and genuine sense of discovery make for plentiful amounts of time-well-spent (regardless of the duration) moments simply exploring and rediscovering the extent to which level design can be fashioned here, the game can run the risk of losing its own bearing with some occasionally questionable padding and objectives that offer no genuine or worthwhile substance. All that said though, Gravity Rush 2‘s hybrid of cel-shaded animation and classic anime/manga illustration with its aesthetic remains pleasing to the eye and gives its game’s world a newfound sense of liveliness — whether it’s up amidst the clouds or wandering through the many streets or isles below. Though not as almighty a step up as some of the more recent sequels we’ve seen, Gravity Rush 2 remains a fun and intriguing place to return to.