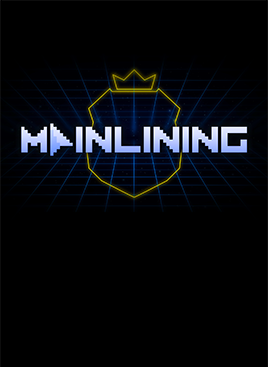 As developers Rebelephant make abundantly clear in one of the accompanying press releases to their point-and-click “hacking” simulator, Mainlining‘s premise centres around a rather realistic premise on the debate between security-without-compromise and absolute liberty of privacy. This isn’t the first game, or indeed creation — if we’re going to broaden this out to all forms of media — to tackle the issue of surveillance. The supposed Big Brother (and his many little brothers) watching over us and the vast grey area that comes part in parcel with the whole debate and while Rebelephant’s screen-within-a-screen experience doesn’t exactly take any dramatic turns gameplay-wise, Mainlining is not without the simple pleasures, and indeed the slight thrills, in co-ordinating but one of many secret service operations.

Mainlining puts you in the shoes — not to mention the computer — of a newly-recruited MI7 agent, tasked with handling a series of case files covering anything from identity fraud to hacking to the distribution of illegal goods. A kin to the likes of Papers, Please, Mainlining’s basic structure lies in analysing both information and documentation, both on the fictional world wide web as well as data acquired via hacking into personal files, in order to work out the identity of the suspect or suspects involved in the given case. This is accomplished via a series of ever-expanding programs and software tools provided to you either at the beginning of each case. Be this a command log to hack into potential suspect’s computers, an interactive live-feed map of the in-game city or a simple web browser, Mainlining treats the convention of point-and-click in a very literal sense — making heads or tails of what quickly becomes a muddle of opened browsers and window tabs ending up as a puzzle in of itself.

Once the evidence is located and thus acquired, players must select from a broad directory of individuals to subsequently arrest — providing said evidence that would thus prove their guilt. Succeed and you move onto the next case and also advance the story of what quickly becomes, as previously stated, a typical (yet not entirely unique) tale on the argument between security and privacy. Fail to catch the right culprit, or to put it better, should you arrest the wrong individual and you’re allowed to freely try again without consequence. While the act of sorting through information and narrowing possible leads does become increasingly more challenging — with the puzzle aspect broadening out into more visual means alongside the conventional text-based data-mining — the lack of any consequence for failure does seem to grate on what feels like a rather blunt and cut-throat approach to the hacking sub-genre. 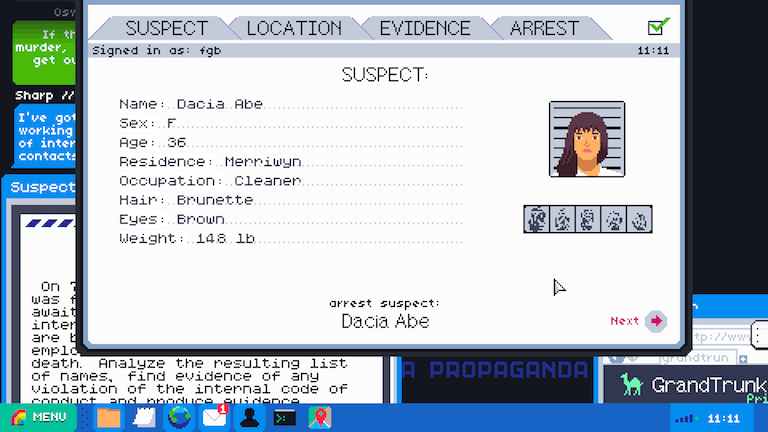 Yet the very act of identifying and tracking down suspects is clearly and deliberately dry and coupled with its similarly coarse humor and it’s clear Mainlining isn’t trying to sex up or otherwise add some unwanted flair to what, in real-life, is as far from glamorous or perhaps thrilling a job as one might perceive. It’s this unapologetically semi-realistic take that adds a lot to the momentary experiences on offer and ends up being one of the game’s main charms all-round. Even with its bright and often varied color palette to represent both the darker corners of the web and indeed the pixellated representation of its city setting, Mainlining manages to walk the fine line between being visually enticing and focusing on its intended tone, without letting one dominate the other.

It only takes a few operations into the game to realize just how embedded one can get with each scenario and before long, the intentionally early-Millenia aesthetic — with its blatant Windows XP homage, borrowing of long-forgotten web applications (ah, Internet Explorer, we meet again) and reminiscing on a time when dial-up was the only means to connect to the internet — is both personally nostalgic as it is cunningly spot-on with its repercussive nature. A prime example is the chat tab which constantly runs in tandem at the side of the screen; the constant spotting of a new message sending the chat window scrolling up only forcing you to clamber out of your current line-of-thinking (trying one’s best to clear the four or five windows you’ve got open at the same time) in order to read what was said. Out of possibility that something, whatever it is/was, might help you with the current case.

Mainlining is full of these insignificant little nods to past (personal) computer habits but more importantly, does a good job at integrating them into the natural flow of gameplay — further emphasizing the not-so-glamorous life of a secret service agent while at the same time making the actual experience all that more accessible. While the actual interaction and interface governing the mechanics is kept relatively clean and simple throughout, minor gripes involving the size of scroll-bars in certain browsers or the constant looping of its soundtrack at points — which can be limited more often than not to some mellow drooping of chords — can frustrate but thankfully not ruin entirely an experience that makes sure to put plentiful amounts of possible pit-falls and red herrings in its mix, to throw the players off the closing scent. 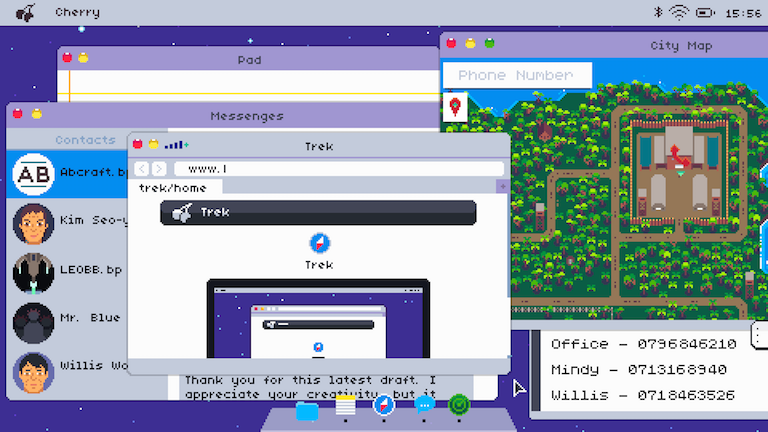 Though not the first of its kind and by no means the most original tale spun from out this current trend of liberty-vouching discussion, Mainlining is a smart and cleverly put-together point-and-click piece that is layered enough with its puzzles but prominently more effective in its use of real World culture in providing that added sense of personally historic immersion. Though solving its numerous cases might not deviate wildly from the convention of hacking protocols and research-gathering processes, Rebelephant do at least recognize that the simplest of inputs can often instill the greatest feelings of accomplishment. As vibrant a presentation its multi-window-hopping might show, Mainlining‘s greatest appeal is its coldly apathetic approach to hacking and the great debate that brings with it.