It is with full acknowledgment that admitting the following will result in the summary revocation of any garnered gamer cred accrued over my tenure at this site: I have been playing Frozen: Free Fall: Snowball Fight on the PlayStation 4. It started because my wife enjoys the game on her Kindle, but she runs through lives quickly. I thought she might like to have it on a separate system and downloaded the free-to-play title onto the console. I know, ladies, it’s a shame that such a gentleman has been snatched up. Anyhow, the wife had asked me to help in a few cases as I am more adept at planning moves while she is quicker at taking advantage of the existing board. It became a cooperative couples game in our hands, passing the controller back and forth between lives, all the while helping each other out. Disney and the developer, Supervillain should have the makings of a fun family experience, stemming from an amiable Bejeweled/Candy Crush Saga rip off. It’s too bad that it’s a technical fecal hurricane.

There are a few points to support this observation. One of the most glaringly obvious lies in the hitches and starts the title experiences when first loading the game. Navigating menus, selecting levels, and making moves results in horrendous amounts of lag. It gets to the point where the player has to wait so long before being able to make a starting move that the game engages dumbass mode, highlighting a potential action that can be taken on the board. Again, this is a title that runs seamlessly on an old Kindle. There is no reason that the same title should experience these types of issues on a piece of hardware with multiple times the amount of horsepower.

This is minor in the grand scheme of things. Once the initial lag wears off, the game is fine. However, there are challenge specific bugs that renders the title nigh unplayable. We first ran into this with the “windows” in some of the later levels in the initial “Winter” pack. These need to be opened by making matches on two different sides of the obstacle. They cannot be moved beyond making a match below them, which causes them to drop. In theory, using special line clearing gems, or explosive gems, should count as a match and break a lock. At least, this is how it works on the working, mobile versions. Here, it counts as nothing. That wouldn’t be a huge deal, except there are two separate levels where the windows are packed together and meant to be opened with the specials. It was only through tenacity and luck that we managed to clear these, though it took a few weeks. 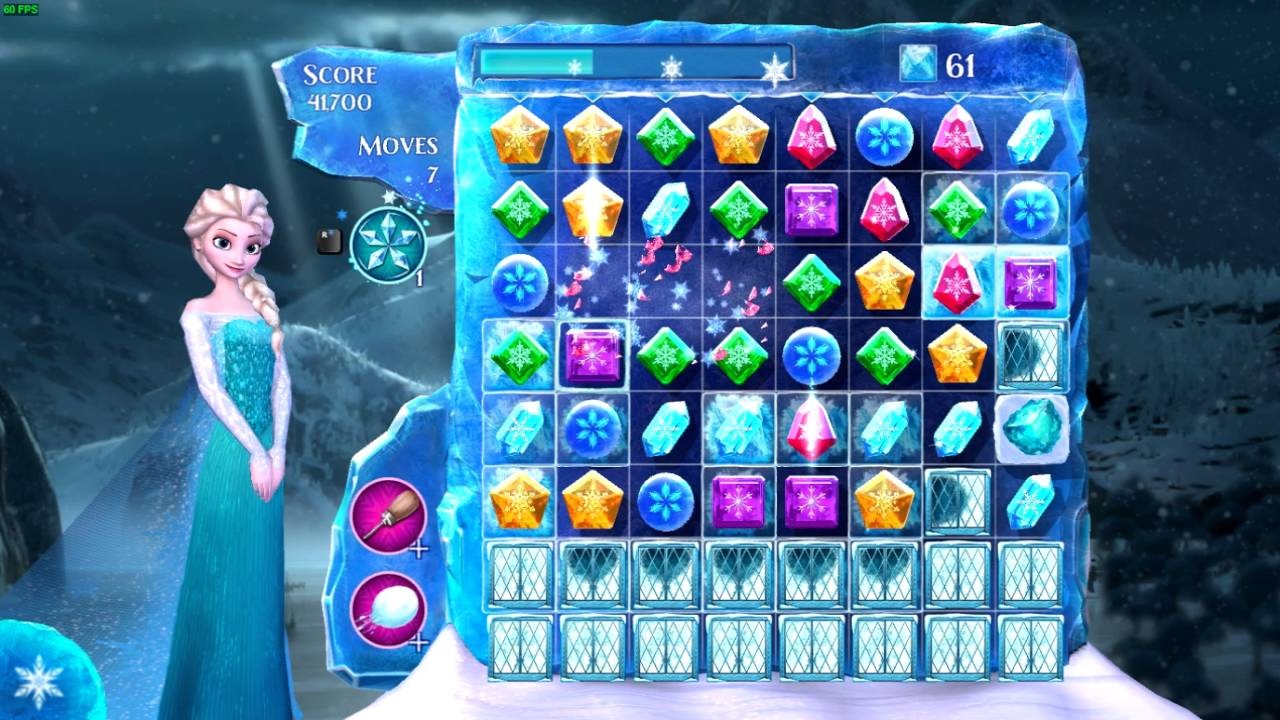 Elsa looks incredulous that I am wasting my time here.

This wasn’t the only issue. Over the months, we managed to clear the Winter pack and made our way to the Summer set of stages. We finally got to level 25 of this pack. Here, the players are expected to make matches next to kindling a few times over, eventually setting them alight. The kindling is packed on the right side of the screen. The idea is that a steady stream of ships drop down. Making matches on the left side of them sends them to the right, hitting the kindling. Again, this is how it works on the mobile version. If we were lucky, we would get four total down the one column where they were supposed to fall. We were not often lucky.

After a few weeks of beating our heads against this wall because there is something wrong with us, please send help, I actually e-mailed support. A couple of days later, I received a response. “Try turning off your console and then turn it back on.”

Incredulous stare at the e-mail…

Of course, I know the difference between rest mode and turning the damn thing off, and I don’t like consuming power pointlessly. This is why I have never written an article complaining about needing to wait for a patch to download. The choice was made to forego the convenience of automatic downloads in favor of reducing the use of electricity. I wrote back that this has been done numerous times.

Today, I received another e-mail. As I am unsure about the legalities of posting a support e-mail in full, I will paraphrase: “Gee, that sucks, and I told everyone here that I think so. Keep trying!” (“Keep trying” is a direct quote, by the way.) So, that avenue is closed. 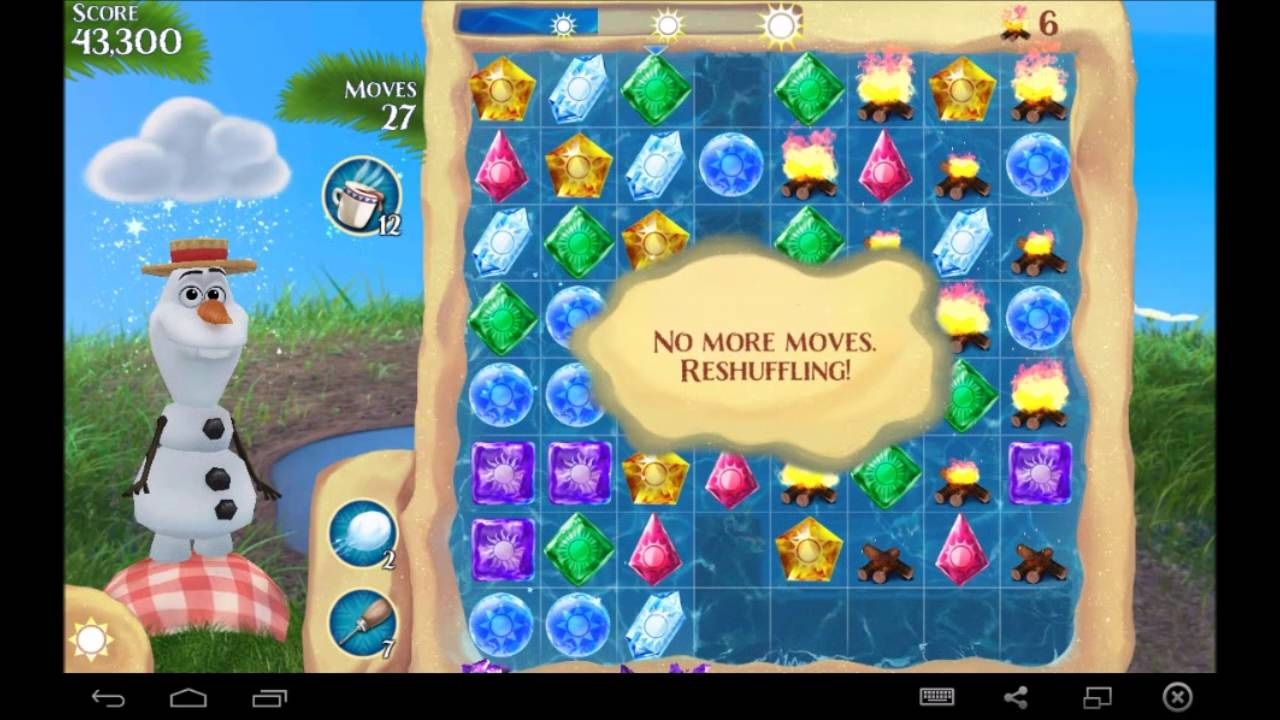 I stole this off of Google Images. Credit goes to GameWalkDotNet. Apparently, they are as lame as me.

I do not foresee any patches occurring based on my interaction with the company, and there is a good business reason: both of these issues can, theoretically, be surmounted by giving the company money for power ups and extra moves. Now, in theory, that isn’t horrible. The company produced a title and should be compensated. In fact, the idea of purchasing a few based on the fact that we were enjoying the game was considered. With free to play games that I enjoy, I am willing to kick in however much I would have been willing to spend on the title if it were a retail purchase. In this case, it won’t be happening. They have had a broken, glitched out title on the marketplace for too long, making no attempt to fix it. I mean, the “daily bonus” is only awarded every other day, for crying out loud.

As a matter of fact, the sheer ineptitude leaves me feeling compelled to give out the following information, discovered on accident. Part of the studio’s income is devoted to selling lives. Don’t bother buying them, though, even if you’re jonesing for an extra chance. Instead, after running out of moves and before selecting “No” when asked if you want to use a snowball for a few extra moves, exit to the dashboard and close the application. Reload, wait for the lag, and go again. Screw you, Frozen: Free Fall: Snowball Fight. Never has a “family” title made me so prone to using non-family friendly language.