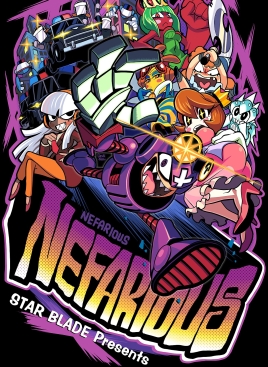 Rise & Shine, we need to talk. Look, we’ve had a good two weeks here. A quick fling, if you will. And despite your flaws, you still delivered a satisfying game indeed, one that was quite unique when you first appeared. But…well, I feel we need to start seeing other people now. See, it turns out you aren’t the only hand-drawn, cartoonish 2D run-and-gun platformer with a setup featuring a meta angle that pokes fun at classic video game tropes around here anymore. True, that is a weirdly-specific genre, but a new suitor has indeed appeared in the form of Josh Hano’s Nefarious, and not only have they turned out to be more fun, but the lead was more than willing to ransom off a princess or two to buy me a few diamonds, so there’s that as well.

Yes, Nefarious is a platformer where you play as the villain this time around. In this case, our lovable lawbreaker is Crow, a supervillain descending from a long line of air pirates whose main shtick is terrorizing Macro City, kidnapping the fair Princess Mayapple, and generally embarking upon plans to take over the world. However, when Macro City’s hero ends up being…well, a bit of a dick, Mayapple doesn’t get rescued this time around, and with one princess down, Crow decides to proceed with his ultimate plan to kidnap four princesses from other nations as well, using them to power his greatest superweapon so far, the Doom Howitzer.

As expected, though, we eventually learn that Crow isn’t exactly the one-dimensional villain he appears to be, and that the various other princesses in this world don’t exactly have perfect lives as well. The story surprisingly hits a few emotional beats, sweet moments, and even undergoes some nifty twists as events unfold, especially when you go hunting for a few secrets. But still, the main focus in Nefarious is on the comedic aspects and the various satires of the clichéd plots of damsels in distress, and it definitely succeeds in those areas. It helps that Crow is a gleefully mad and lovable main character, with his hammy demeanor and “Evil Mega Man” design making him impossible to dislike. The other princesses (and Crow’s secretary, Becky) also have their own unique personalities and traits, along with their own humorous parts, and they play off Crow perfectly. 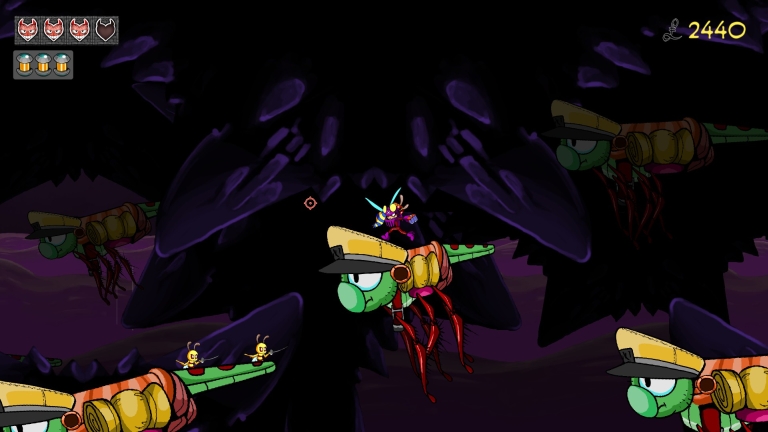 It also helps that these characters and the lands they inhabit look quite incredible indeed, with an art style the perfectly mimics the likes of classic Saturday morning cartoons. The animation is also quite fluid and enjoyable, with even the most basic of level designs like fire and ice worlds still coming off as attractive with their own special flair, though it’s in special levels like an undersea voyage and a train robbery where the color schemes shift a bit and things truly shine. Also, I’m just going to admit that Nefarious gets bonus points for having character design and concept art by Andrew Dickman and character portraits by Ryo Nishiguchi, two of my favorite artists, whose styles and influences definitely add to the game’s charm and comical flair in various ways. The wide variety of music also helps as well, with a lot of peppy, retro-esque tunes providing the perfect soundtrack to a barrage of grenades.

Speaking of which, Crow’s main staple of attacks include a giant mechanical fist to smack enemies with and a supply of grenades that regenerates, which can be upgraded back at his ship in between missions with the money you collect to add such effects as sticky bombs and three-way attacks, diversifying your arsenal a bit. Bizarrely, though, Nefarious seems to be obsessed with grenade jumping as well. Not only are there set sections with grenades “embedded” in the background to create some tricky jumping sections, but grenade jumping is also required to access a few collectibles and certain bits of cash. It’s kind of odd to see a feature used more in FPS games to show up here, but aside from that, a lot of the gameplay sticks to more of those from the 16-bit era, resulting in some nice, old-school, jump-and-shoot action. 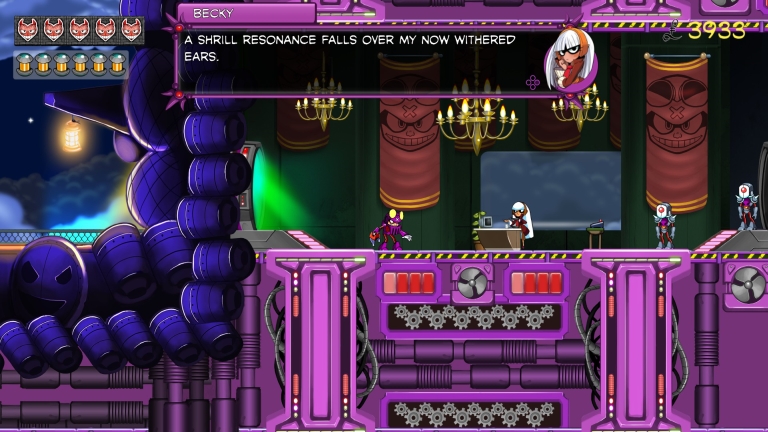 The gameplay does get switched up in various ways, though. There are parts where carrying around your currently kidnapped princess grants Crow enhances skills, like the ability to jump higher or create platforms out of the smoke trails from your grenades (the latter making for a particularly good level). But another part that’s been a big focus of the marketing for Nefarious recently is its “reverse boss battles,” where you battle the heroes of the various worlds you travel to with direct nods to classic bosses, like a Dr. Robotnik-style ball and chain or a Kefka-inspired turn-based RPG battle. This is where the video game tropes tend to be in full supply the most, and they definitely ensure that Nefarious definitely has more variety to it. They’re easy to figure out and a joy to experience, making the spoofs/homages into a welcome addition.

But as enjoyable as Nefarious is, does it have any flaws? Well, if you’ll go back and check our recent news, you’ll see that the game was originally meant to be released as an Early Access title, but then was suddenly upgraded to a proper launch after the developers weighed the pros and cons, with the game essentially being complete. And while the end product is still pretty great, some of the wrinkles an Early Access version may have had still end up showing. For one, even if you play with a controller, the game initially keeps using keyboard prompts for several moments, which gets a touch annoying. Some of the AI isn’t exactly the brightest as well, with more than a few enemies finding themselves jumping into pits and running off of platforms, unable to jump back up. Not to mention a couple of achievements that unlocked by error, as well as other minor issues. Nothing that particularly spoils the game, but stuff that suggests it could have used a bit more polish.

Also, the final boss (or at least the one on the route with the good ending) is particularly annoying, being hard to hit and suffering from a lack of checkpoints, falling victim to a bit of fake difficulty and seeing a sudden challenge spike. Which now that I think about it, was one of our beefs with Rise & Shine. What is it with that one issue affecting these specific types of games? 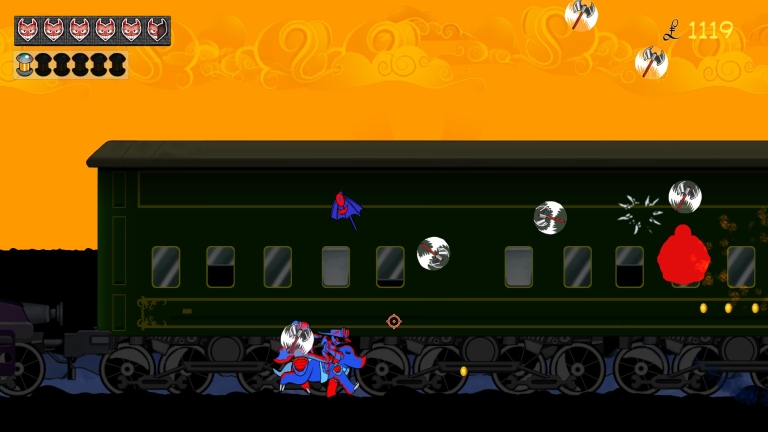 It might be a bit trite to say that being bad never felt so good, but indeed, the villainous escapades of Crow and company make for an incredibly fun platformer indeed. Led by a boastful and charming character and diving straight into a cute sense of humor with some gorgeous graphics, Nefarious then opens up further to reveal a terrific adventure that simultaneously features and pays ode to some classic ’90s action, while still throwing in its own twists and engaging story in order to craft a wicked little romp that makes being the megalomanic a delight. It’s a bit rough around the edges in some areas, but the end result is still some of the most enjoyable tyranny you’ll experience this year (as opposed to the regular tyranny that seems all-too common now…).