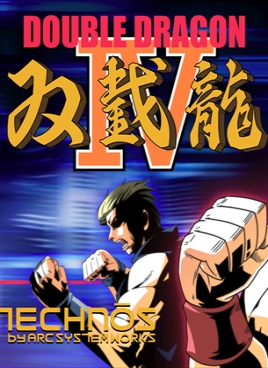 The late ’80s saw the rise of the beat-em-up genre thanks in large part to Double Dragon. This arcade smash led to the genre being cemented as one of the biggest in both arcades and consoles, with Technos bringing it to the forefront and other companies like Capcom and Konami fallowing their lead. While Double Dragon became big thanks to arcades, its NES incarnations gave it an entirely new audience. Console-owners may have gotten reduced versions of the games overall, but some fared better than others — and the NES became the de facto home console for the series. The SNES also played host to a pair of entries in the series, including a Battletoads crossover, while the mid-’90s saw a resurgence in the series thanks to an animated series that led to a toyline and a dreadful fighting game. A mainline entry in the series hasn’t been seen since the SNES days — outside of the reboot/parody game Double Dragon Neon — and the main plot itself hasn’t moved forward since Super Double Dragon 25 years ago.

Double Dragon IV follows up on Double Dragon II and sees Billy and Jimmy Williams out to save Mariam and save the world — so the game won’t win any awards for plot. The storytelling here is far better than usual for the series though, which Tecmo’s NES days coming alive with cutscenes very similar to the ones used there — only with far more color. While an 8-bit-style pixel art is used for characters, environments get a 16-bit level of color depth and the story itself is fun and easy to follow. You go through a variety of stages, beat up enemies, occasionally battle bosses, and move on.

Each of the brothers controls the same and has a healthy array of punches, kicks, elbows, jumping attacks, and combos to help you defeat the hordes of enemies you’ll encounter. Control options are varied and allow you to customize the button layout as you see fit — so there’s no excuse for an uncomfortable control setup. The core face button controls work fairly well, but d-pad movement can feel a bit stilted and doesn’t always work exactly when you want it to. There were quite a few times where pressing to go in a certain direction to simply face an opponent didn’t work. 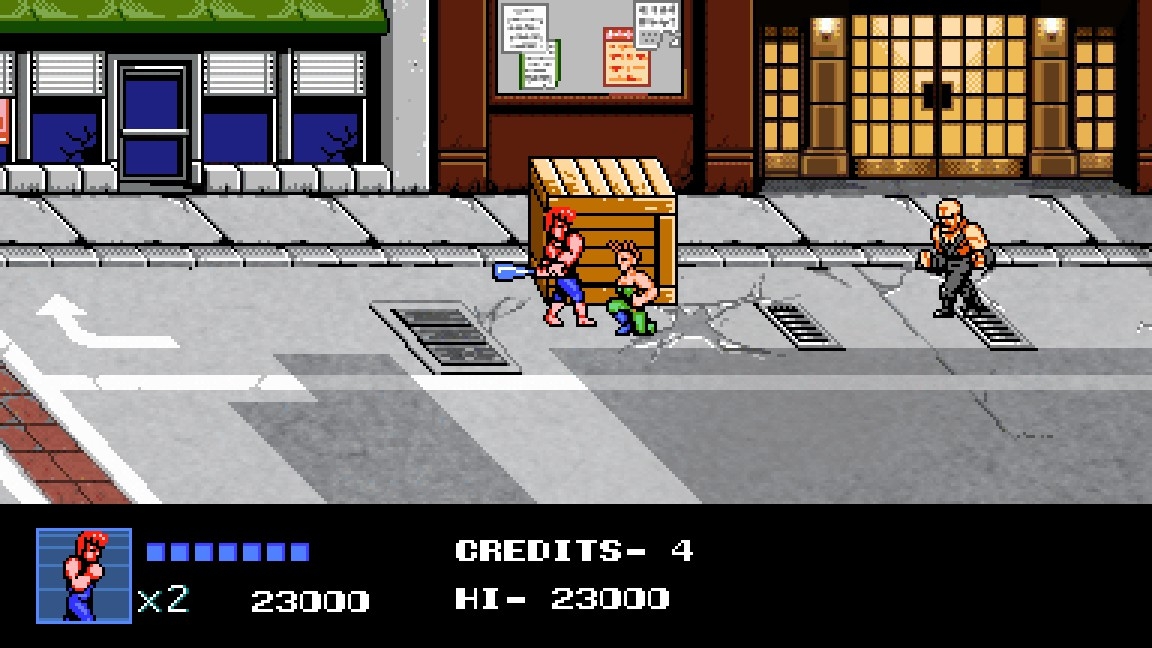 This kind of issue does lead to you taking needless damage, and even with the ability to back elbow enemies behind you, it doesn’t solve the core problem. Every attack has its own animation timing, and while a kick may take longer than a punch, it also gives you slightly more range. That range means that you can reduce your chances of being attacked while throwing it — especially useful if you’re surrounded. The headbutt does a ton of damage, but has a long setup animation — so it’s best served for one on one battles. The basic punch combo works fine for most enemies, and is the best way to attack several enemies after they’ve been dropped since you can just keep attacking them once they stand up.

The tried and true beat-em-up formula does get shaken up with the usual Double Dragon platforming. This does have mixed results though, as the retro vibe of everything does work against the game here. The developers made the platforming NES hard to be sure, and that will lead to frustration. There are also some instant-death pits and perils that can barely be seen in advance. Each death takes a life away, and with only five continues to work with, you will have to learn the hard way that death is something you’ll want to avoid whenever possible.

Fortunately, Double Dragon IV does have some nice anti-frustration features built into its design. While you can run out of lives and continues fairly quickly, you can resume from at most one stage behind where you died easily. By just pressing Start on the main menu, you can pick the closest available mission, and while this will start you at the beginning of the level instead of at a checkpoint, it is far better than having to replay the entire game to get to a new stage. This feature may not make up for a lack of infinite continues, but it does find a happy medium between forcing you to get better and not making the game too frustrating to keep moving forward with it. 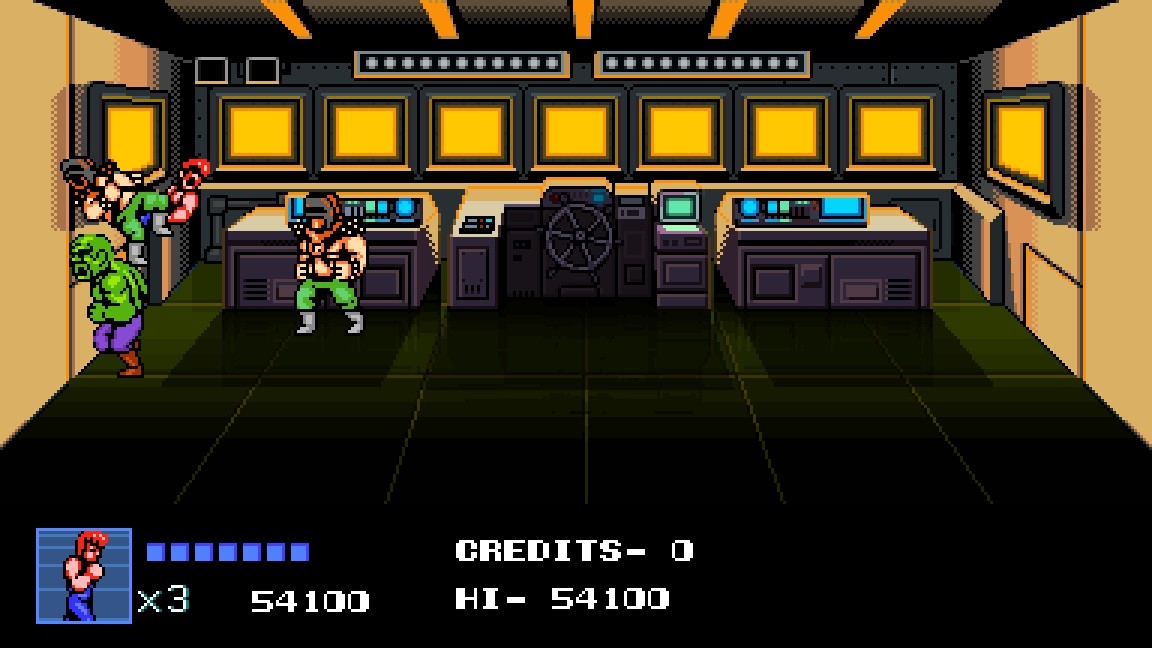 Double Dragon IV‘s replay value is through the roof — and for a beat-em-up, that’s very rare. Double Dragon Neon had that same feature through stat boosts, tons of moves to learn, and a lot of amusing achievements/trophies that rewarded you for doing weird things. DD IV’s replayability comes from its ever-expanding roster of characters. You can unlock characters in the story for use in the duel mode and then use those characters in the story itself. This allows you to play the game is many different ways and even learn a bit about how each enemy you control works so you can then later fight them more efficiently.

As with most beat-em-ups, multiplayer can be a key component to things. Sadly, Double Dragon IV does not have online multiplayer. While this could be added down the line, there’s no word on that as of now, and it definitely hurts the game’s overall value as it stands now. Fortunately, local multiplayer is strong and allows you to not only go through the game with an ally, but also take part in the one-on-one fighting game that helped make this series stand out in the NES days before one-on-one fighting games became their own major genre. 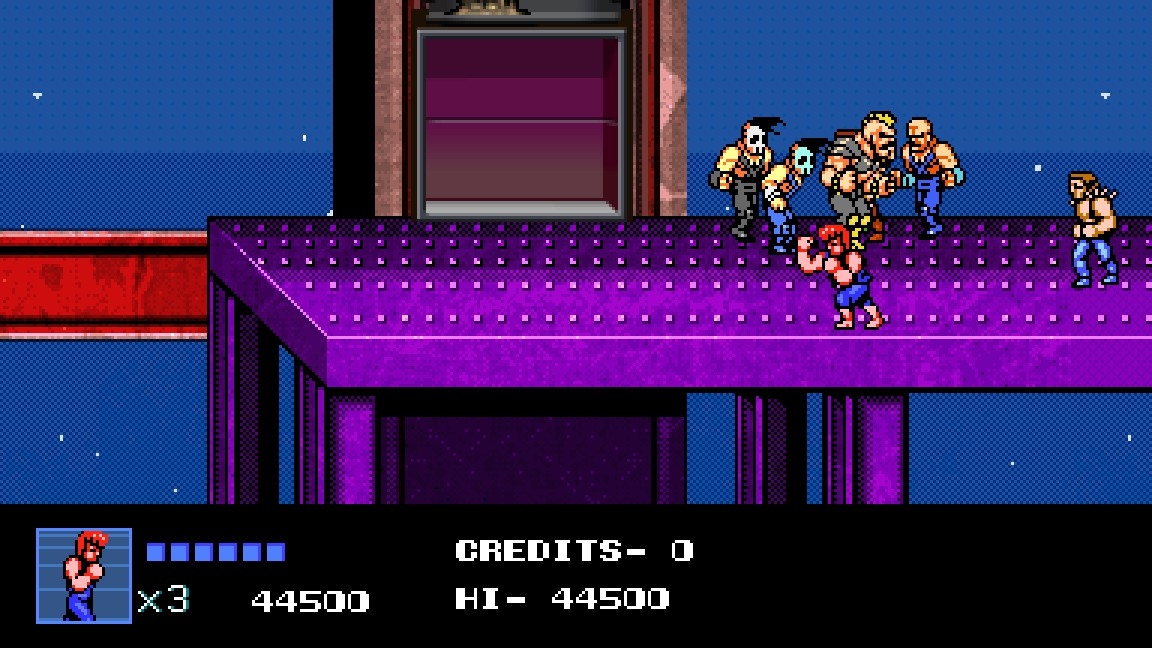 Visually, the mixture of 8 and 16-bit graphics works fairly well. The 8-bit style using more defined pixels and edges makes it much easier to gauge your timing for attacks as well as positioning for jumps and attacks. The lack of shadows does make lining up yourself to enemies somewhat difficult at times through — especially when dealing with enemies who use projectiles. The character art could look a little better for the main characters as it does seem a bit lacking, as enemies do tend to look more detailed. Backgrounds and the worlds as a whole look fantastic — with a fairly wide variety of environments to fight in and a lot of detail is featured in each area. Areas will switch color schemes to indicate a bit of day to night cycling and it does make a difference in the overall look and feel of the stage — adding a sense of foreboding and danger.

Double Dragon has always been known for having a great soundtrack, and while Double Dragon IV sticks close to what has been done before, it still works well. The soundtrack can be heard in either a chiptune style or a more in-depth modern set of instrumentation. Either way, your ears are in for some of the best beat-em-up music in gaming history as every song gets your blood bumping. The chiptune versions are a must for those who love that style, but we found the modern arrangements to be far superior overall. You still get the chipstune-esque sound to them because that’s the base of the song, but have a lot more to listen to overall and they sound even better with a good set of gaming headphones on. The sound effects are a bit weaker though. They aren’t awful, but don’t really convey much in the way of damage and sound far too similar for every attack — although some, like the headbutt, do properly convey a greater sense of damage, most don’t. 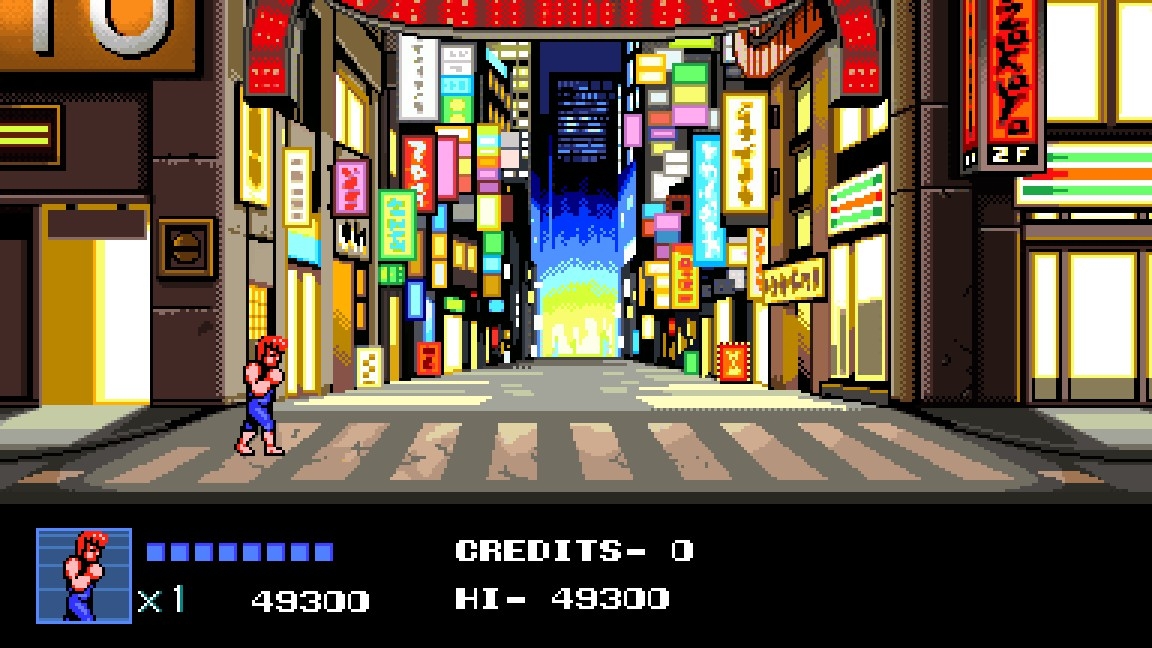 Double Dragon IV continues the franchise’s legacy with possibly its best home game to date. It wears its 8-bit roots on its sleeve and delivers exciting beat-em-up action most of the time. The overall package is hurt by occasionally clunky controls, iffy platforming and a lack of online play. Longtime fans of the series will be right at home with the overall package, though. The core gameplay is rock-solid and is well-worth checking out for longtime fans, while newcomers will find out exactly why the franchise has been so beloved over the years.