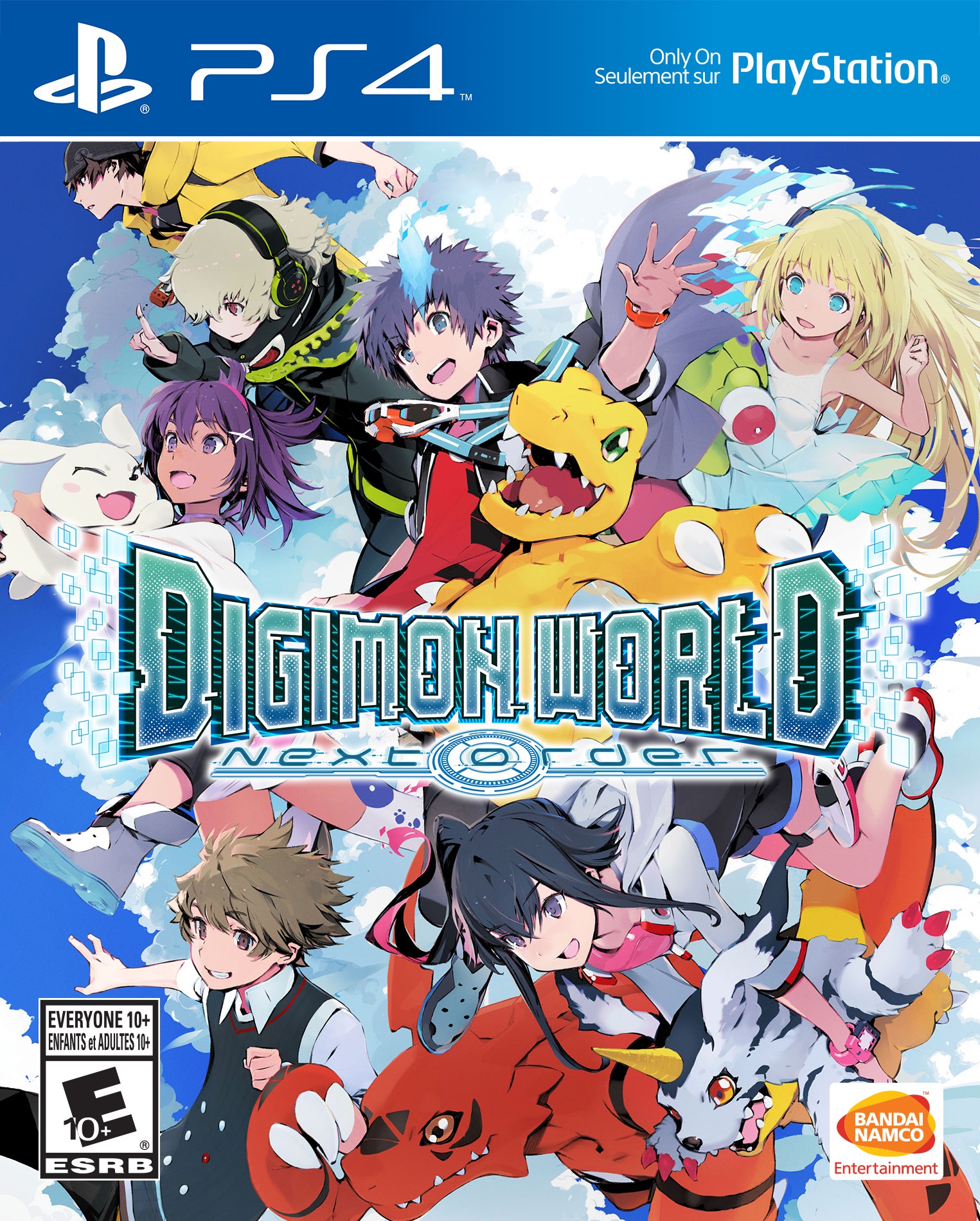 In Digimon World: Next Order, you play as either a male or female who is transported to the Digital World after picking up their Digivice. Meeting up with your partners, WarGreymon and MetalGarurumon, you’re suddenly attacked by a rogue Machinedramon. After narrowly defeating it, both partners ‘die,’ and you are summoned to the Jijimon’s house, who resurrects your fallen friends. It is here that you discover Machinedramon are running rampant, destroying your home base of Flotia, and scattering Digimon all across the Digital World. As a Digidestined, it’s up to you to restore order to the Digital World.

Next Order’s story isn’t as deep or complex as previous Digimon games, but it has enough twists and turns and heart to keep players playing. It mostly serves as a backdrop for a lot of quests and adventuring the game has to offer. Still, on its own, the story is enough to keep players playing through, even though it is not as engaging as Digimon Story: Cyber Sleuth. 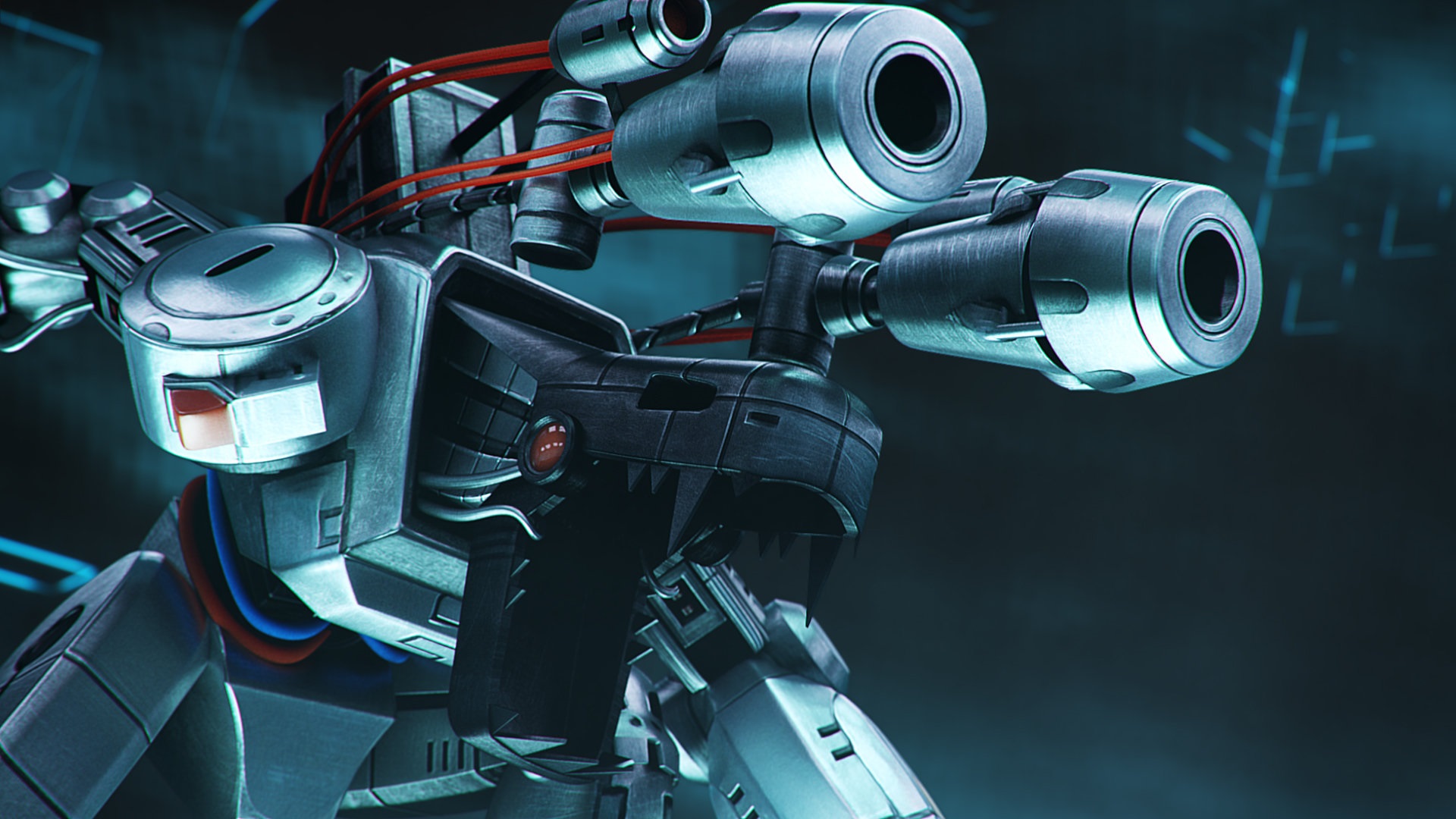 This goes without saying, but Digimon World: Next Order and Digimon Story: Cyber Sleuth are two very different games. While both are part of the same franchise, both World and Story are their own sub-series, and the first thing you have to know about Digimon World: Next Order is that there is a steep learning curve. Despite a handy tutorial at the beginning, it could take hours for players to fully get a grasp on what is going on. Next Order hearkens back to Digimon’s origins back when it Tamagotchi competitor, and focused heavily on managing your partner.

Next Order is very much a management game where you take the Training Hall to raise your Digimon’s stats to get them to Digivolve. While you will receive stats boosts from defeating enemies in the world, the vast majority of stats will be earned in the Training Hall. Players will level up their Tamer by gaining experience through battles, bringing materials back to the hub town of Flotia, and recruiting friendly Digimon to live and work in the town.

Nearly every choice a player makes will impact the progression of the Digimon. There are multiple different Digivolution paths a single Digimon can take, and Digivolutions are triggered based on stats. If you want a specific Digimon, you’ll most likely need an Excel sheet or a handy guide to keep track of all the different stats you need. It can be time-consuming to get the Digimon you want, and the frustration is further compounded by the fact Digimon can die. Every Digimon can only live for so long, and after an amount of time they will die, and you’ll have to start all over. There are items later in the game that can prolong life, and items that will automatically allow a Digimon to Digivolve to a specific level, but that does little to take the sting out of death at the beginning of the game. 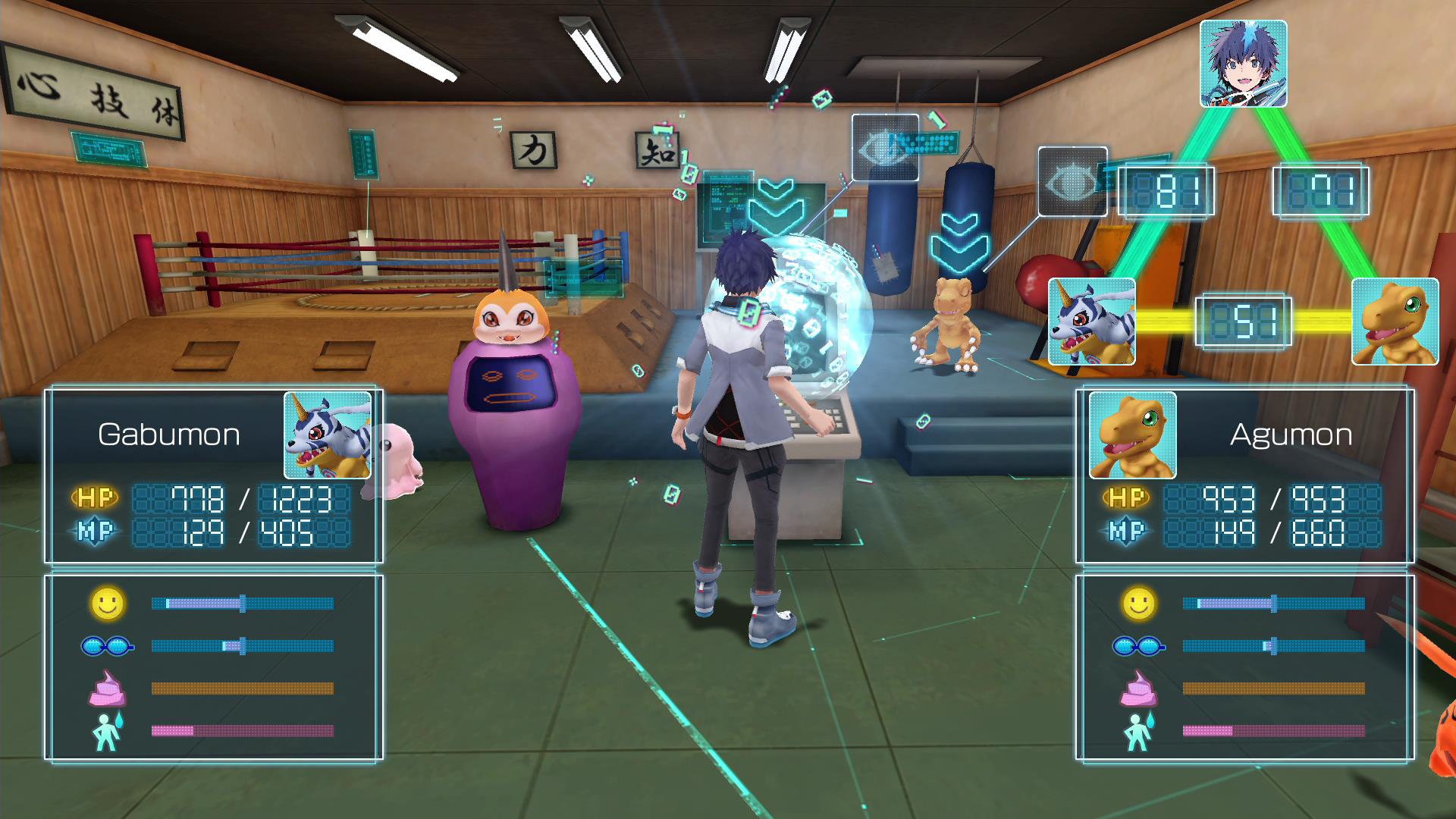 Flotia is Next Order’s hub-world and becomes essential to the game’s progression. What starts out as a little town will quickly develop into its own city. Friendly Digimon you find in the Digital World’s various sections will come here and offer their expertise. For example, Tentomon opens a shop, Birdramon a ‘taxi’ service that will instantly take you to already visited sections of the world. Players can further manage the development of their town through materials collected. Buildings can be upgraded, which will then increase the amount of items you can buy, and how much food you can harvest. Watching Flotia grow from a simple village to a city is pretty cool, even though it increases the amount of loading screens.

While that aspect of management is enjoyable, actually managing the Digimon can get frustrating. Digimon will get hungry, and they get hungry a lot in Next Order. You’ll spend more time opening up the care menu to feed your Digimon then you will participating the story. It gets pretty ridiculous, and yes, they’re going to have to poop too. Digimon management extends to relationships. You’ll not only have to maintain the relationship between you and each individual Digimon, but also the relationship between the Digimon. It’s a huge juggling act that can often drag down the game when you just want to have fun.

Combat is mostly a hands-off affair. You’re on the sidelines cheering on your team and build up their Order Power while the AI handles the rest. The AI decides who the Digimon attacks and what move to use. There are opportunities to take control and give them specific commands. Hitting L1 or R1 will bring up a Digimon’s Ring where you can spend accumulated Order Power to unleash a specific command. Players will also be able to use items during battle and even change a Digimon’s target. The real meat of the gameplay is learning the appropriate time to Cheer to maximize the amount of Order Power gained. When paired with two powerful Digimon, watching the AI pummel enemies can be extremely satisfying. However, for tougher battles, it would have been nicer to have more input over what the Digimon can do. 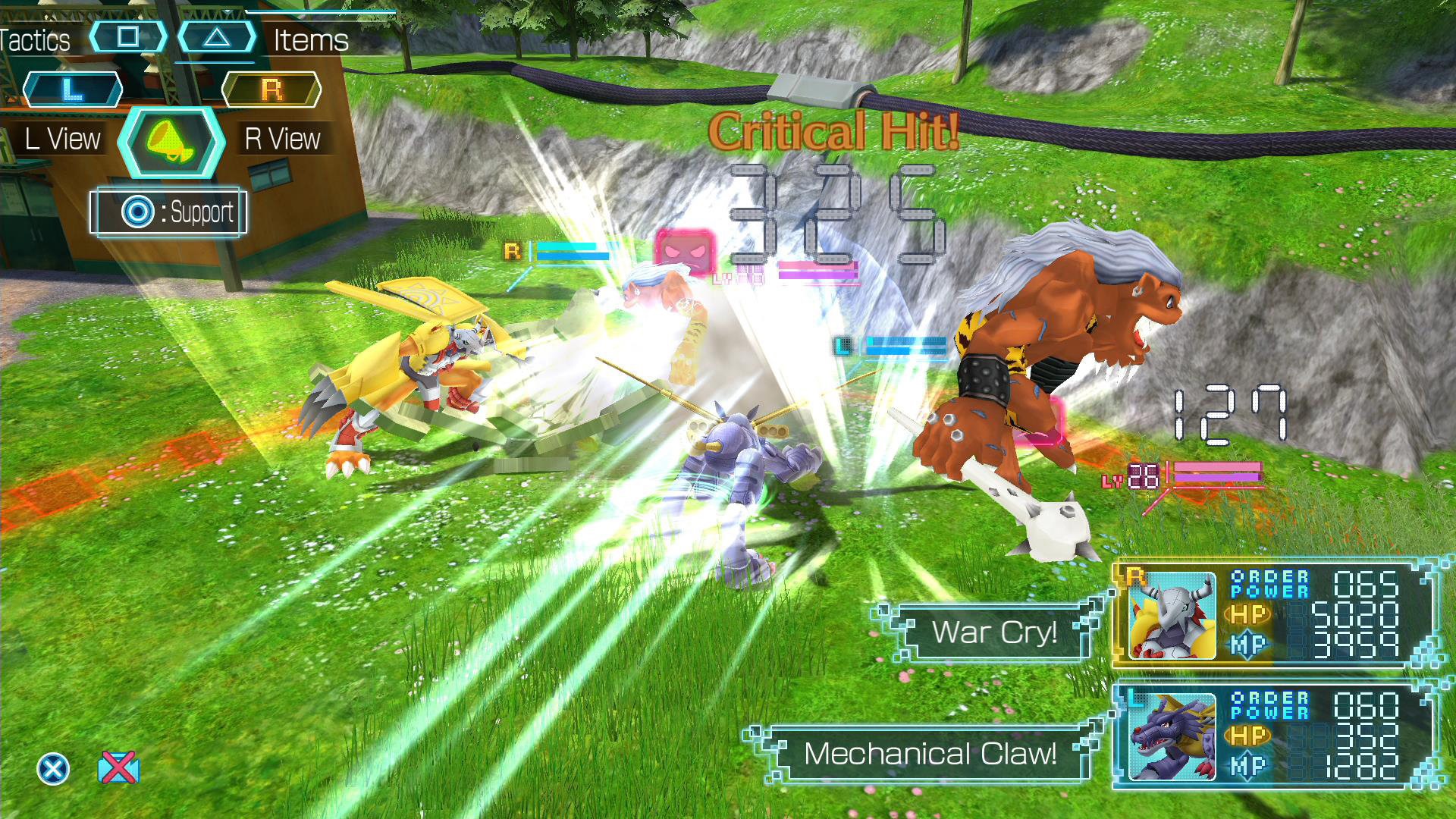 The Digital World is vast, and Next Order does a pretty good job of bringing it to life. There’s plains, forests, creepy ships, deserts, and volcanoes to explore. It’s plenty of variety, but the game’s complicated progression system limits what you can explore. Since you can technically go to any area from the get-go, and because there’s no traditional leveling system, it’s hard to tell what areas are ok and which aren’t. In one area, you could easily defeat enemies that were level 25, but another area could have a level 10 enemy that is tougher than you. It’s a jarring and uneven experience from one area to the next.

Digimon World: Next Order may be running on PlayStation 4, but it can’t hide that it was originally developer for the PS Vita. The graphical update did improve a lot. Textures have more detail, new objects have been placed in the background that wasn’t there before, and new effects have been added. However, the hallmarks of a PS Vita title are still there. The world still feels barren and sparse, and there are a lot of loading screens.

The best part of this upgrade is the performance boost. Where the PS Vita version’s framerate chugged under the load of the open world and effects, the PS4 version had no problem with the game. The added effects, geometry, and details have done nothing to impact Next Order’s performance. While there are a lot of loading screens, loading times are, thankfully, not very long. It’s a solid graphical update, just don’t expect the game to look like a top-of-the-line game built exclusively for PS4. 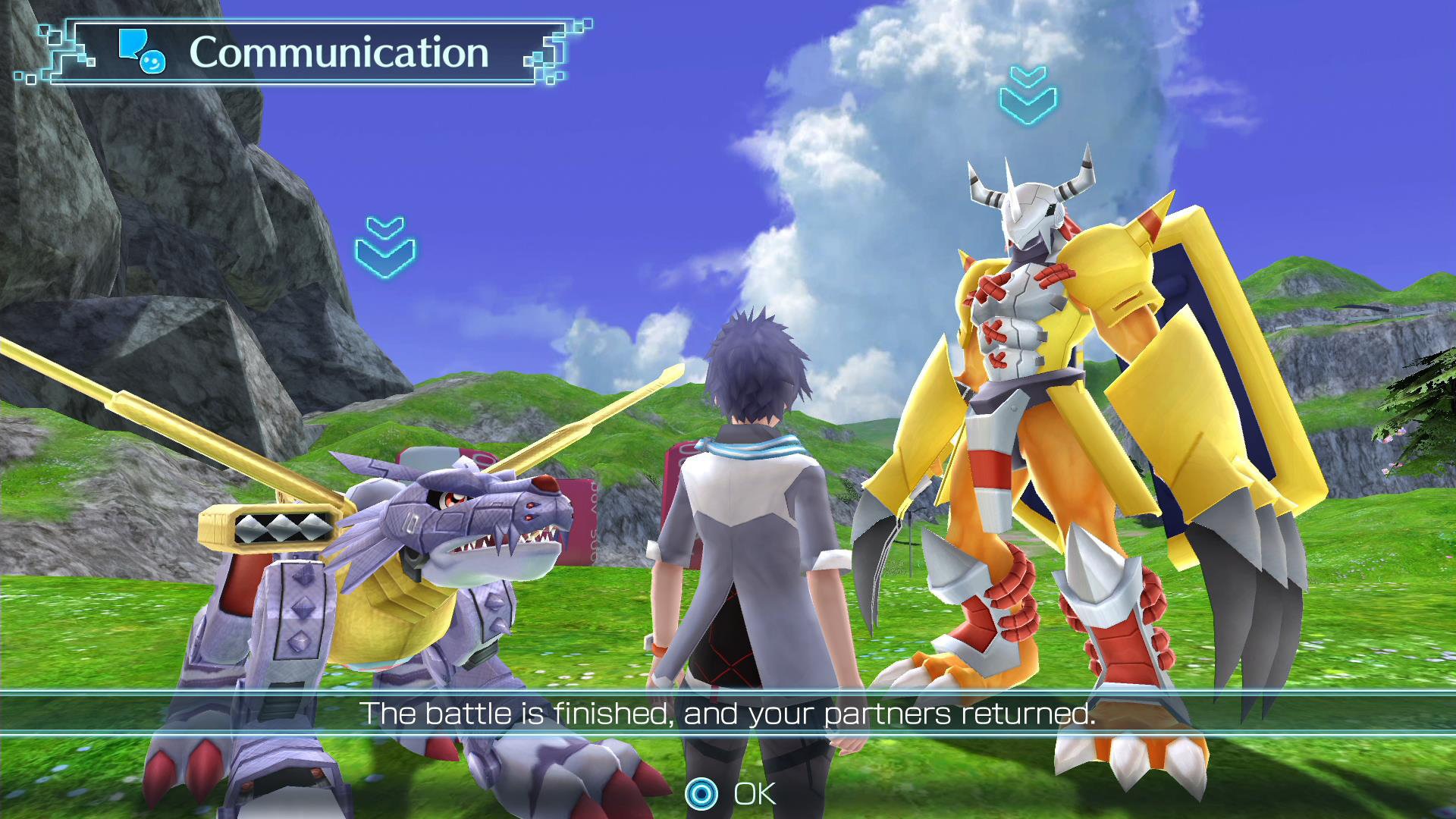 Digimon World: Next Order is a true homage to franchise’s lineage. This an RPG all about management. Digimon management, stats management, Digivolution management and city management are what you’ll be doing the vast majority of the time. Elements of this can be addicting, especially watching your Digimon grow from lowly Rookie to powerful Mega, but it can be tedious thanks to how often your Digimon want to eat, and watching your hard-earned Ultimate and Mega level monsters drop dead can be soul-crushing. While the world is vast, it feels barren with an uneven difficulty. Digimon World: Next Order is a fantastic RPG for those who like to get down into the nitty-gritty of different stats and how they can affect your Digimon. For everyone else, it might have one too many frustrations.