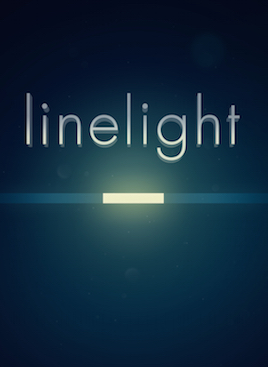 If there was one thing last year’s The Witness taught us, it was that line puzzles weren’t as tedious and/or as dull as one might have previously perceived. Granted, there was much more than the hundreds-upon-hundreds of line puzzles that made Jonathan Blow’s overdue return one to take note of, but it goes without saying that what that game proved above all else was that simplicity in concept doesn’t always mean sacrificing a satisfying end delivery. Minimalism has so often been a technique, as much a visual style, independent developers have sought to go to (and rely on in some unfortunate cases). No greater an example does that show than in this very same genre of games, the puzzle variety.

Be it mechanically or visually, minimalism is by no means exempt from the same criticism or pitfalls that the most extravagant of titles are often judged on, but such a deliberate deviation from the norm — about carving out Worlds, stories, suggestive or otherwise — is always going to be what makes or breaks the lasting appeal of a game such as Linelight, regardless of how good or bad the gameplay actually is. Such is the direction developer Brett Taylor (My Dog Zorro) takes on this adventure-esque puzzler of sorts that lends itself to the curiosity on what lies ahead — let alone the head-beating frustration on working out the solution to such deceptively-minimalist arrangements of lines and numerously-colored shapes, each with their own varying characteristics and nature — in another scenario, these types of games may well have let the unwanted meta-narrative become the focus.

Fortunately, Linelight avoids any kind of secondary parallel with a story or plot and is much better because of it; the game is a quintessential puzzler in both mechanics and presentation. Yet despite its clear focus on the gameplay front — on primarily guiding a lone, solitary white bar down a continually-expanded path, solving challenges along the way and collecting gems as an optional, but not forcibly required, objective — what makes Linelight truly shine is the extra care and attention put into the appeal of simply being on this solemn journey of one little line of light traveling through the game’s ethereal aesthetic of quaint color and beautifully-arranged, piano-led music that scores not only each of the six main “Worlds,” but also certain states and scenarios the player/line comes across among each of these linear, but well-designed, paths. 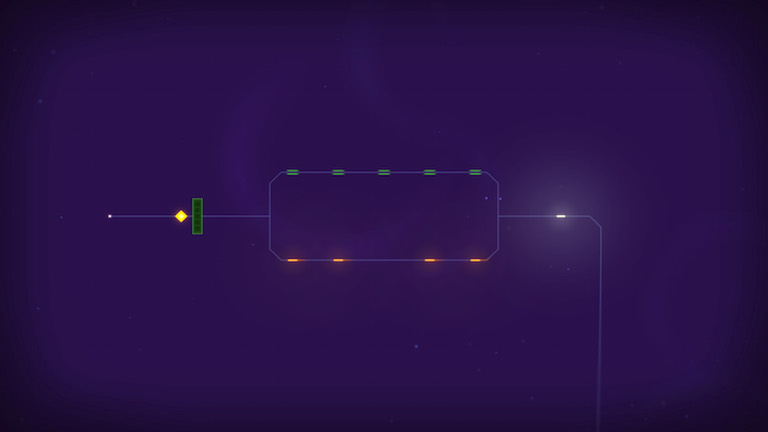 Like all great puzzle games, Linelight makes sure to increase the difficulty and shake up the formula at every turn — be it from World to World or simply from each screen-enclosed area to the next. While each World starts by straight-off introducing a new mechanic or new element that requires a different means of tackling, each new concept is cleverly taught to the player without shunting tutorials or immersion-breaking instructions in the player’s face. Even the occasional button prompt doesn’t take away from how well Taylor slowly-but-surely allows players to adapt to the new rules on show and it doesn’t take long for the player to become immediately accustomed and in-tune with said World’s new inclusions, not to mention the way it reintroduces previous mechanics to create entirely new and unique puzzles that are some of the more brilliantly delivered sequences seen in a puzzle game for some time.

Without giving too much away about the puzzles themselves, Linelight’s method of deduction requires as much timing and placement as it does a mere working out the correct route from A to B. Better still, the way some puzzles are orchestrated in a non-puzzle affair — treating some parts like retro platformers; avoid certain perilous colors at one point, keep moving to survive in another — only hits home how wonderfully arranged some of Linelight’s puzzles really are. At times they have as much the same hidden complexity as, say, a circuit board: simple to look at, yet in actuality house so much more than its appearance may allude to. To do so much with so little, it’s hard not to praise the level of care Taylor has so obviously put in even the more shorter-spell of puzzles. And that’s one of the most admirable things of all of Linelight‘s accomplishments: most of these puzzles can be solved in less than minute (if you know what you’re doing); much like The Witness, the great benefit/reward seems to be solving more puzzles. But to reiterate, Linelight’s charm, as much its long-term appeal, is as much the journey as it is the satisfaction of getting your humble white line past a locked door or unreachable point. 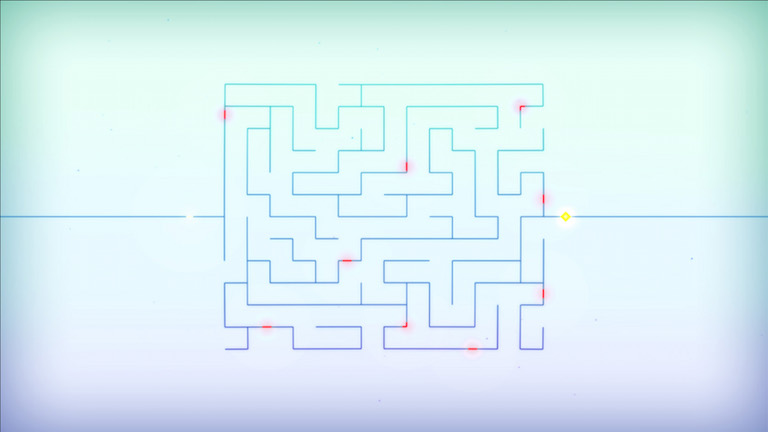 It’s this said journey that ultimately grants Linelight the status akin to those that know how to lift a smile on your face — long-after the ample teeth-grating annoyance of dying/respawning on the same damn puzzle a few minutes before — be it perceived as a more relaxing climax or not. And what the game does during (what many could class as) the second half to each World, while not entirely groundbreaking, demands lofty mention for how unexpected yet captivating it is. Again, without spoiling anything or giving too much away — because such moments have a much grander impact when going in blind — and if you’ll excuse a third Witness comparison (though I will gladly throw in a reference to last-year’s ingenius shake-up of the formula á la Pony Island too) it’s what Linelight does with its presentation, in relying on the gameplay on show to further push the envelope of possibility, that has that similarly eye-widening recognition of genius in transforming the experience into an adventure game of sorts. Beyond a simple array of line puzzles to solve and orders of levels to complete, in creating a somewhat paradoxical and surreal journey of something as mere as a line (or two).

For a game without a story, or characters or anything with relatable foundation, the way these segments channel so much of the causal joy of, say, a Rube Goldberg machine, or indeed a “plot” in the most vaguest form, cements just how wonderful Linelight is at not just being an engrossing puzzle game to start off, but a charming experience about helping a solitary little line reach the end of the path it’s on. Both in its delivery and the way it takes full advantage of its strict level and sound design to carve out something both mentally challenging but emotionally pleasing at the same time. And naturally its soundtrack — especially the techniques used to alter or otherwise contextualise certain melodies — only elevates the level of impact it has, ever higher.

The game is not without its misgivings, however, most predominantly in the technical side where frame-stutters and even brief freezes can pop up on a rather frequent basis throughout the six-or-so hour length. The annoyance is only truly felt during the most tentative of puzzles where careful movement and tactile positioning are required and there’s no greater bane when a brief freezing of the frame-rate means you accidentally stumble into a deadly trap or miss the window of opportunity. Even so, when at its most fluid, Linelight smoothly transitions from each self-contained space to the next as you guide your white line further on down each World’s route. What’s more, though not a critical aspect to its all-round success, the fact you can pan in and out of each World to see the progress you’ve made — not to mention how far you need to go to reach the end goal — is a welcome touch and only illustrates the elegant arrangement of minimalist shapes and lines to create something that, in actuality, houses something incredibly engaging to tackle and thus conquer. 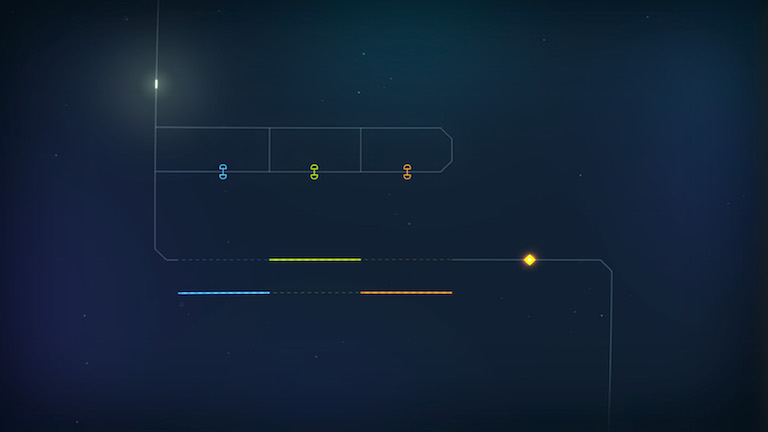 Those who’ve had any skepticism that visuals meant to accompany minimally-structured gameplay could strive for greatness need only look at Linelight to have their prejudices proved wrong. It’s become almost guaranteed that one game comes along every year that proves that the implementation of certain mechanics and methods of gameplay can trump even the most engaging of imagery. Above all else, it’s clear Brett Taylor/My Dog Zorro’s tale-but-not-a-tale of guiding a solitary white line down a merry road of challenge-ridden paths might well be not just one of the hidden gems of 2017, but the uncontested hidden gem of 2017. Linelight‘s unapologetically simple aesthetic is cunningly packed with a punch matched only by its intelligent assortment of variety and execution in creating a puzzle game that blossoms into something more than merely guiding colored bars on a circuit board-like winding of lines. A testament to the ever-growing puzzle genre, Linelight is nothing short of a stroke of genius.