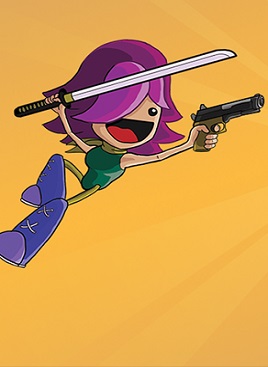 Released back in 2012, Bootdisk Revolution’s Bleed was one of those games that demonstrated the value of true indie design. Using a lo-fi aesthetic, it managed to capture the best action parts of The Matrix by way of Contra, becoming an impulsively replayable game centered around mastering the stages in as stylish a fashion as possible. Once this is done, kick the difficulty up a notch and try again. Even now, this is a title that I feel compelled to download and play through at random intervals as it simply does not lose its luster. After so long, though, I had given up hope on seeing another entry. Ian Campbell, the proprietor of Boot Disk Revolution had other ideas, and took the time to perfect them with Bleed 2.

The previous game left off with Wryn, the heroine, succeeding in defeating the other heroes of the world, and now sitting as the sole protector. What is a hero without a villain, though? That is what the invasion led by baddie Valentine hopes to find out. While wiling away her free time playing videogames, the building shakes. Running outside to see the trouble, the perpetually smiling Wryn discovers a mother ship spilling invaders into her city. With rapid firing twin pistols in hand, the slaughter of evil begins. For those who haven’t played the original, that should be fixed. However, the mechanics are incredibly easy to pick up. Using a twin stick controller (more on that later), the left stick moves, and the right shoots endlessly. The right trigger allows for triple jumps, while the left slows down time based on a meter under the health bar. There is no complexity to the basic mechanics. No pick ups, new abilities, nor overly obscure details to uncover in order to succeed at this game. This distillation of design only serves to heighten the core of what makes the Bleed series so good.

The additions to the sequel maintain that simplicity while still offering plenty of new ways to engage with the action. Arguably the biggest comes in the form of Wryn’s katana that can reflect bullets with a flick of the right stick. Before unlocking additional weapons, only the purple attacks can be knocked back, meaning the yellow will still take a chunk off of the health meter. When possible, it’s best to take advantage of this ability. With bosses in particular, the reflected shots seem to do much more damage than the projectiles that Wryn is packing. We also now have co-op in our hands. Something this good should not be played alone. 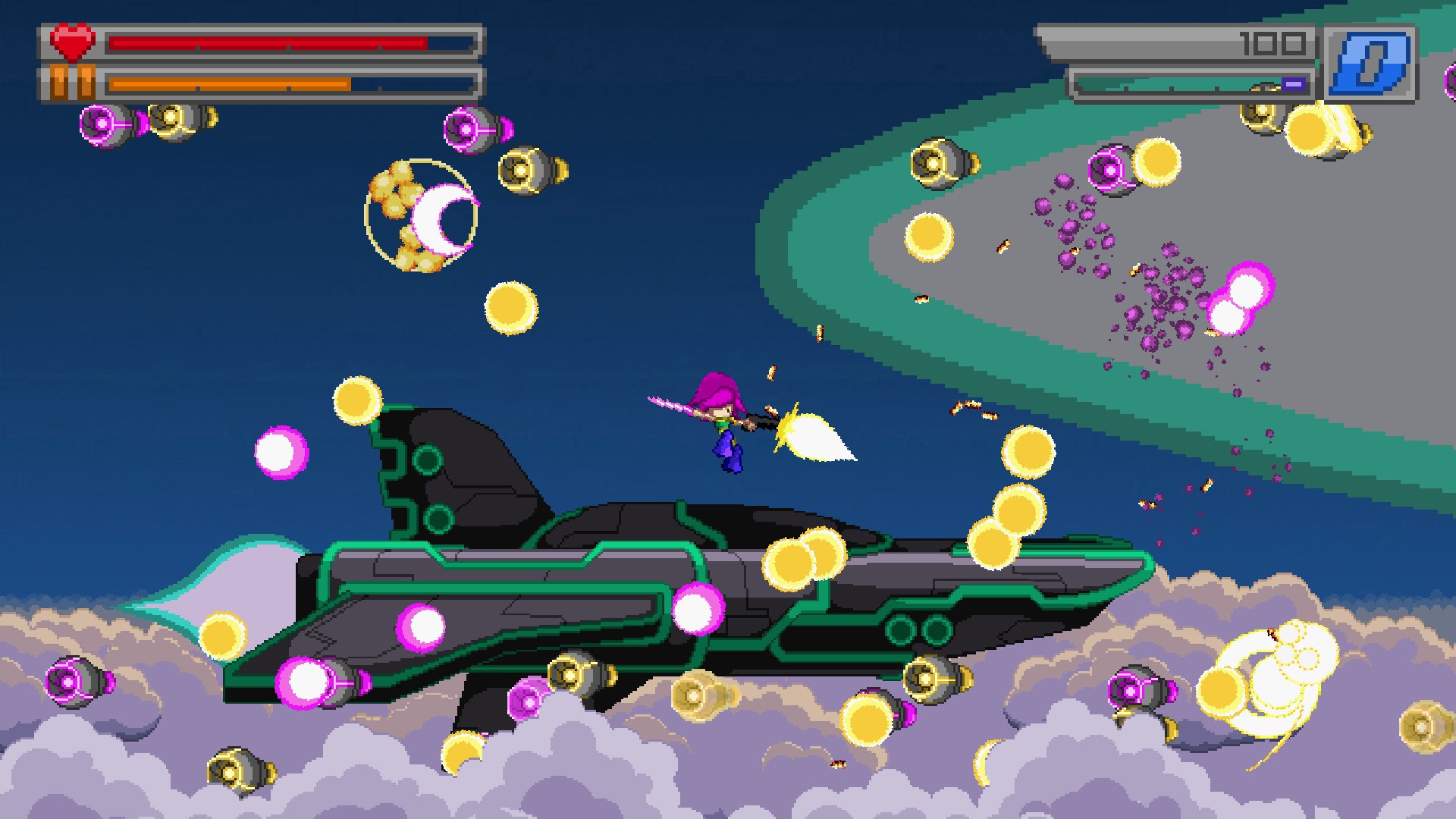 Let there be no doubt: this is really, really good. The design of the combat flow puts the experience of many big budget AAA games to shame. Every moment of each stage is designed to allow the player to pull off impossibly cool moves. Leaping backwards up to a ledge to kill a bazooka toting invader, turning around and reflect a shot back into another, then slowing down time to fly through the eye of a needle in the small space between a wave of oncoming bullets is the type of situation that can happen on just the first level. At no point do these acrobatics become rote, seeing as how each situation, especially the bosses, encourage use of these talents in different ways without feeling like a “puzzle.”

Those bosses serve as the major linchpin holding everything together. The levels can be challenging, especially on the higher difficulties, but the numerous mid and end bosses produce some of the best moments of the game. From shooting down a missile launching villain using only oncoming missiles as a perch, falling after a giant mech suit, gunning it down in midair, to the invading mother ship’s core, each fight contains some imaginative kink to enemy patterns that keep the experience feeling perpetually fresh, even on multiple playthroughs. 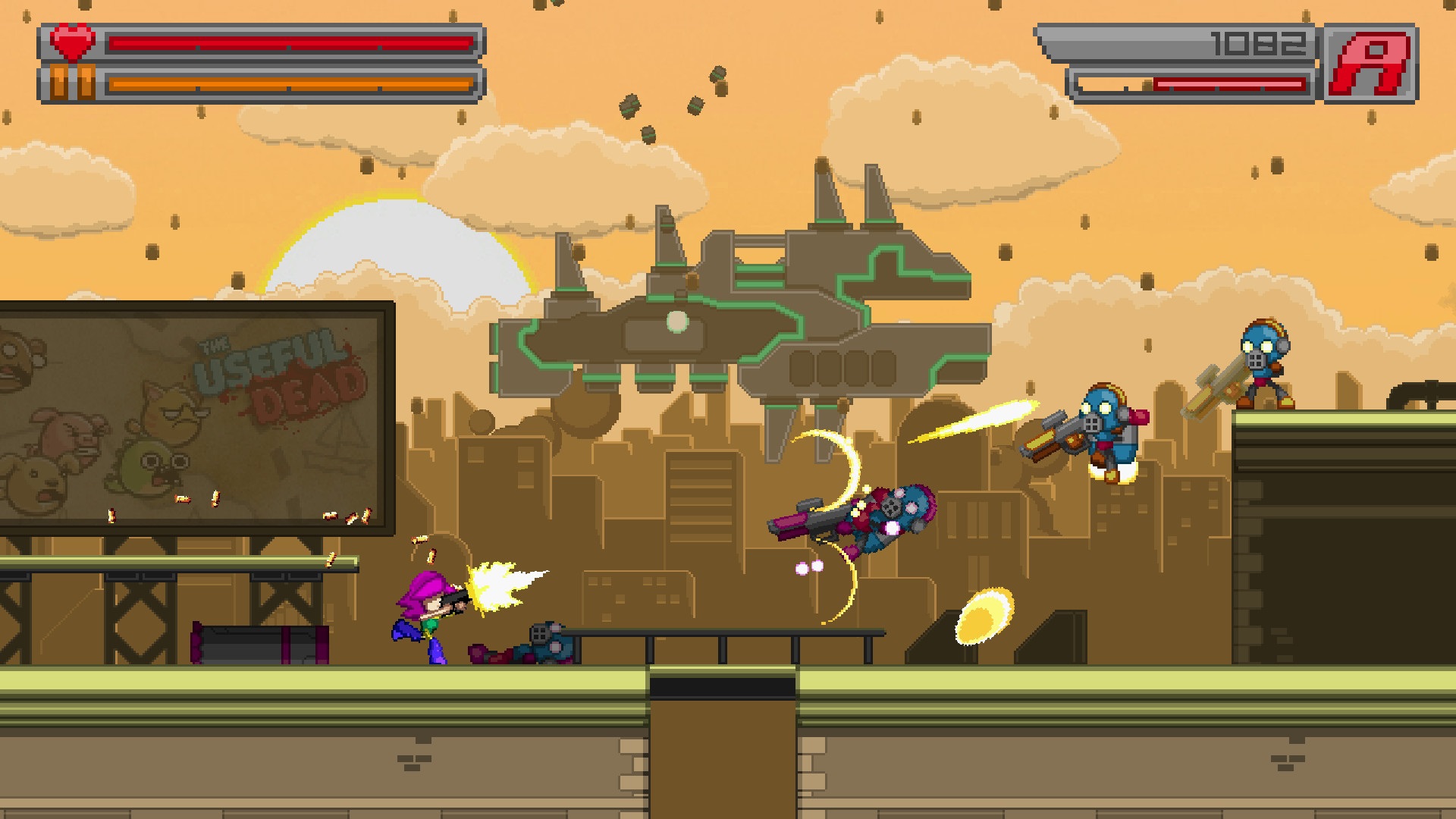 There may be some who will decry the game’s length. The first completion on normal will take less than an hour, factoring in restarts at the rather generous checkpoints (before which, Wryn might advise that “You pressed the wrong button). If that’s all the purchaser plays, they are doing themselves a disservice. This is a game built to be mastered. The idea is to perfect the game to the point that the player can clear the game in one life in arcade mode on each of the various difficulties. I have not tried my hand at the hardest yet as Mr. Campbell put the finishing touches on this level of challenge three days prior to release. Based on his Twitter, the delay was down to constant fine tuning to ensure that it was just right.  Players who don’t want to push themselves that way aren’t forced to do so, though. There are still loads of unlockable weapons and characters to try out, including the Young Girl from Spooky Squid Games’ They Bleed Pixels. That’s not even factoring in high score challenges.

Some could also balk at Bleed 2‘s graphical direction. The game is heavily influenced by retro titles, which is nothing new in the age of indie games. Screenshots don’t really do the game justice, though. In motion, it’s easy to see the craftsmanship that went into the animation as Wryn twists though the air in slow motion to bring her pistols to bear on a violently barfing cat invader. Each enemy and hero is filled with little touches that give them a tremendous amount of personality. Coupled with the music provided by Jukio Kallio (which I will need to get in MP3 form), and sound effects by Joonas Turner, this is a stylish package that comes together into an attractive whole. 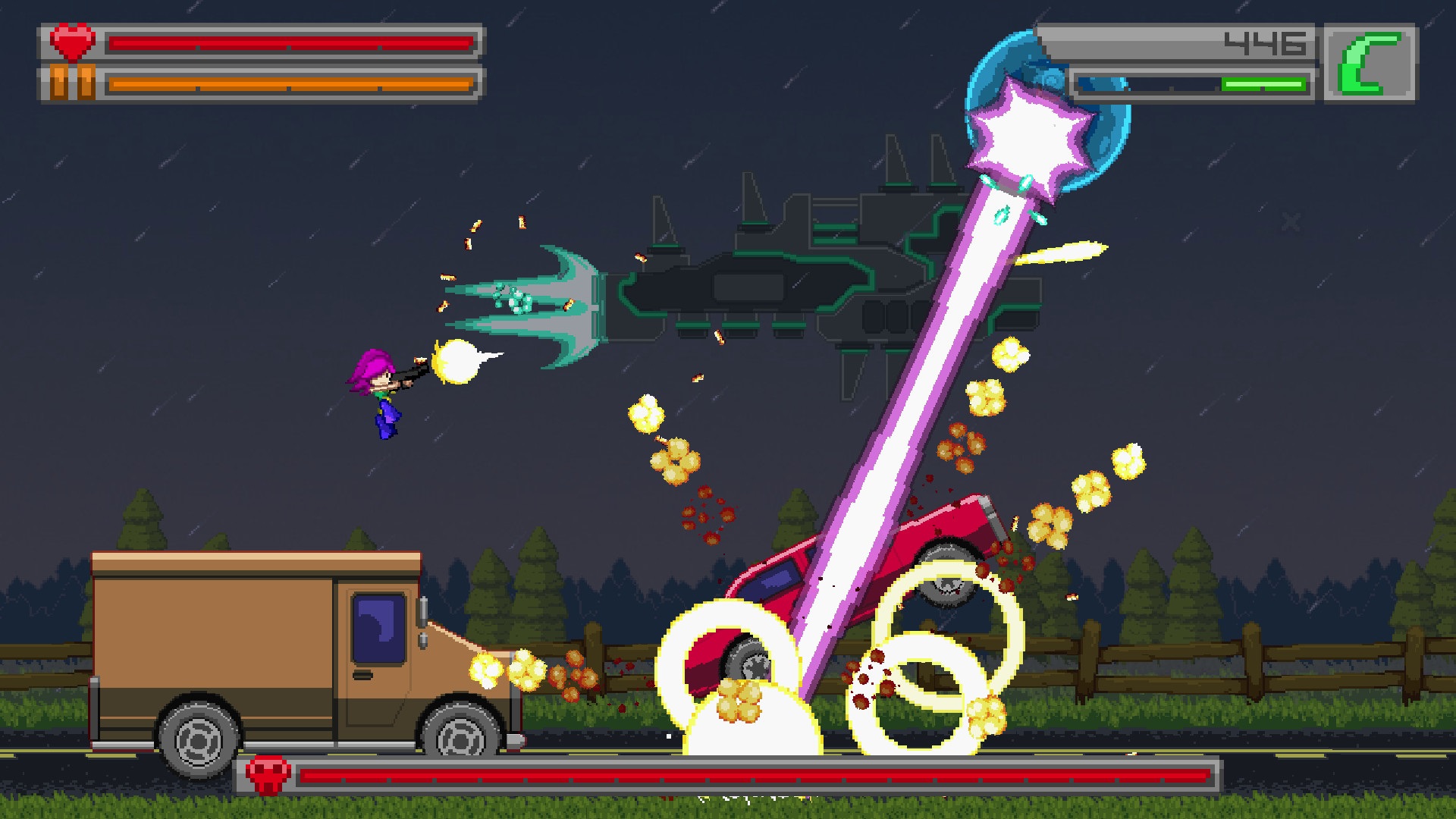 Now, the following statement might irritate the PC Master Race folks, but Bleed 2 should be played with a twin stick controller. There is mouse and keyboard support, complete with an aiming cursor designed to be impossible to lose amidst the chaos onscreen, but the flow of platforming, triple jumping and shooting just doesn’t feel as finely honed using KBM, to the point that it might be unplayable for all but the most adapted to the input system. After fiddling with the key configuration, I was able to hold my own, but nowhere near the level I could pull off with a gamepad.

That isn’t to say that the gamepad input is immediately perfect. The taunt button is activated by clicking in the left stick. Unfortunately, I tend to tense up during some of the more harrowing moments this game has to offer, accidentally clicking the stick and taunting an ICBM as it detonates on Wryn’s face. It is recommended that the player immediately remap it to a face button, as the only time it will be needed during a playthrough won’t require Wryn to be firing anyways. 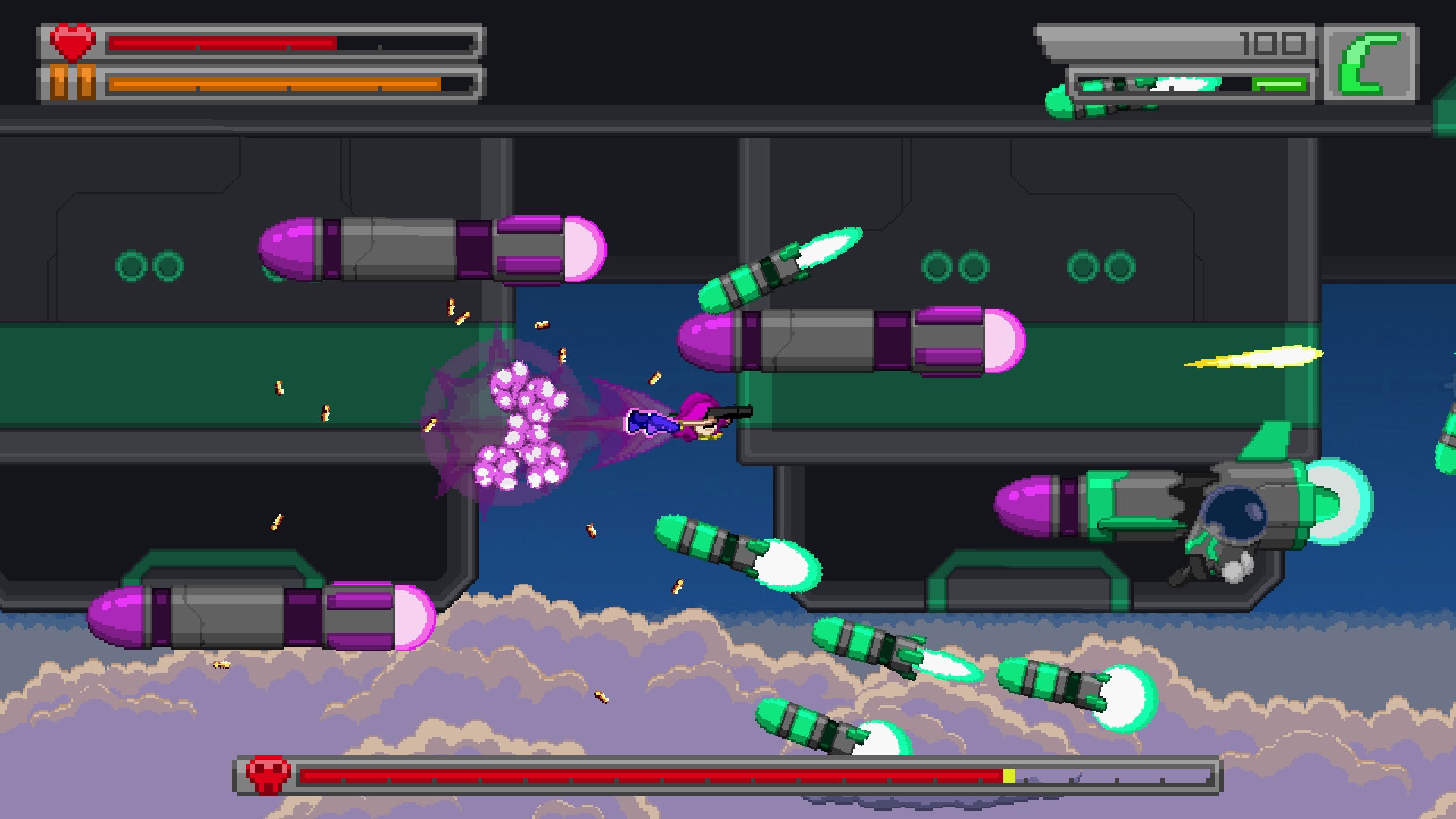 There are certain games that are ubiquitous for the Steam user. Pretty much everyone has Portal in their Steam library. Copies of Thomas Was Alone are more common than sand in the Mojave. Bleed 2 needs to be one of those. As a game, it is side scrolling action perfected. There are no truly cheap parts or dull moments; everything is designed to be learned and surmounted. This is something that just cannot be said about even some of the best games on the market. Considering that even its base price is under ten dollars, there is no reason to miss out. Skipping Bleed 2 is like shoving toothpicks under your fingernails. Sure it can be done, but it hurts and there is no point.