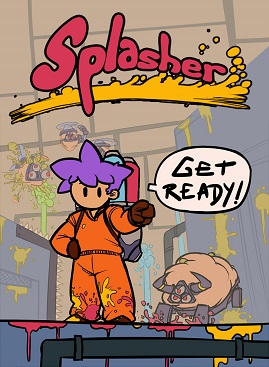 Each year, it becomes increasingly harder for all but a select few indie games to fly above the radar, reaching a noteworthy status among some of the bigger releases leading up to their launch. Depending on one’s perspective, that recognition could be well-deserved, but it’s also understandable that some equally deserving titles could fall through the cracks. Although Splasher didn’t manage to reach those heights, it’s rather surprising when one looks at the team behind it. The three-person unit Splashteam is headed by Romain Claude, former Game Designer and Level Designer of Rayman Origins and Rayman Legends, two of the more well-received 2D platformers of the past decade. Accompanied by Richard Vatinel and fellow former Ubisoft member Aymeric Schwartz, Claude’s next platforming adventure, Splasher, arguably should have garnered a bigger spotlight than it did, as it borrows elements from Portal 2, Super Mario Sunshine and the speedrunning community to spice up the gameplay. A nonexistent story and some overly frustrating mechanics, however, keep Splasher from standing out amongst its platformer brethren.

Splasher stars a nameless, purple-haired hero as he attempts to save his lab co-workers from the evil Docteur, who aims to experiment on them in deadly ways. And…..that’s it. That’s the whole story. No humorous dialogue bubbles, no subtle but impactful touches in the background, nothing at all that promotes any sense of world-building. That’s not to say that games of this scope all necessarily need deep lore and witty dialogue, but fellow platformers like Super Meat Boy and 10 Second Ninja X have proven that a little character can go a long way towards making one’s game stand out and stick with the player after its completion. Why is the purple-haired hero, or any of the Splashers, working at the clearly malevolent Inkorp in the first place? For what purpose are the Docteur’s experiments intended for? Even answering simple questions such as those would have greatly improved the sense of motivation players could get from the story of Splasher. 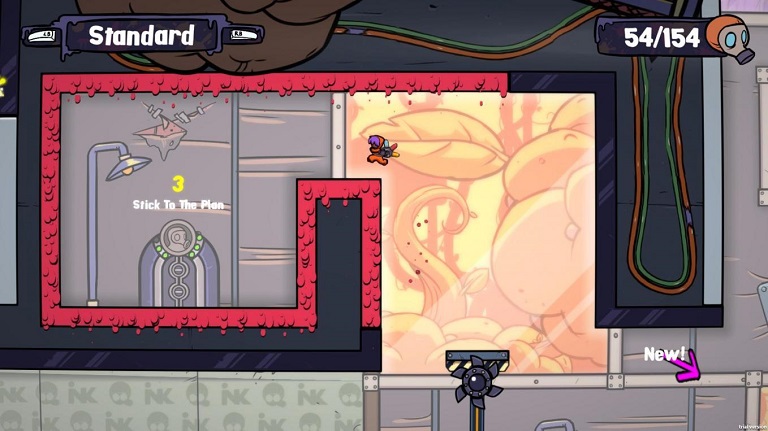 Fortunately, Splasher’s fast-paced and chaotic platforming makes up for many of the shortcomings of the plot. By using and eventually gaining access to various colorful inks, the 22 available levels all offer some pretty clever ways to stick, bounce, and shoot one’s way through enemies and over deadly obstacles. Each level has seven Splashers to save, some of which are located in standalone challenges that often represent the most ingenious parts of the campaign. The boss levels also leave a lasting impression, with rising deadly slime raising the stakes and making every move count in situations that have their speedrunning-focused designs most clearly presented. Not all of the occasionally introduced level gimmicks work, and a few poorly placed checkpoints can slow down the pacing of some levels, but Splasher’s intense gameplay will undoubtedly please fans of the genre due to its creativity and challenge.

As far as presentation, Splasher’s colorful comic book-like graphics and animations are charming, but rarely manage to wow in any significant sense. The action taking place in the front overshadows the need for any sense of variety with the backgrounds, which is unfortunate but expected considering the scope of the game. The soundtrack, while somewhat inconsistent with the environments of Splasher, can often prove just as energetic and original as the levels themselves. The PC version, while mostly polished, does suffer from a few sound issues for lower-end computers, and pretty much demands that players use a compatible controller, as the keyboard adds some unnecessary difficulty. Splasher’s 22 levels offer around seven to eight hours of gameplay by themselves, but the time attack and speedrun modes add plenty of replayability to the title, more than justifying its price point. 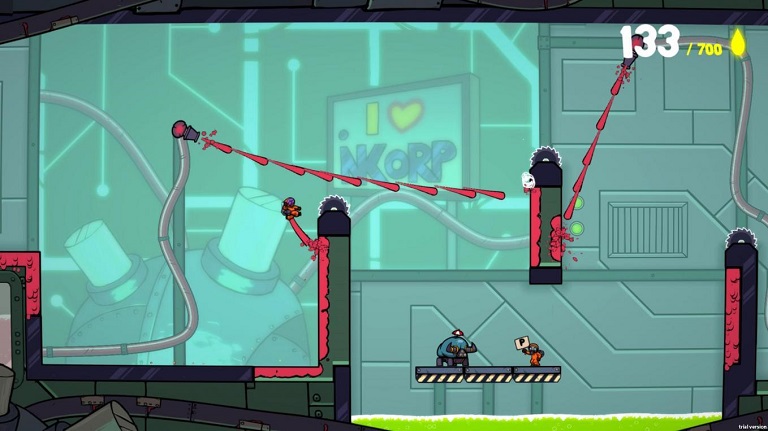 For a first title, Splashteam has shown that they are more than capable of bringing some original ideas to one of gaming’s oldest genres. The action-packed levels offer plenty of surprises to keep players on their toes, even if a few fall flat, and the brightly colored presentation further benefits the unique title. Yet, Splasher‘s distinct lack of character is unfortunate, as even a few minor touches could have greatly enhanced the context in which all of this exciting platforming is taking place. Nonetheless, casual and speedrunning platforming fans alike will find a pleasantly surprising amount of depth and content that boosts Splasher to exciting heights.