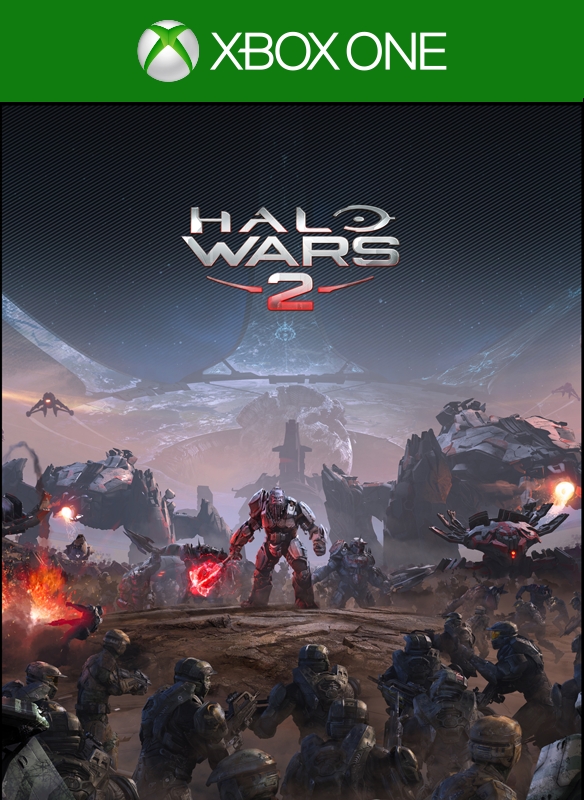 The seventh-generation of consoles felt like a proving ground for the strategy genre as developers attempted to get their games working on the hardware. The limited buttons on the controllers ended up hurting many of the serious efforts and the effort was eventually abandoned. Then came Halo Wars, an RTS built from the ground-up to work on the Xbox 360. Ensemble Studios were able to strike a balance between strategy and controller, but the game never received a follow-up due to Microsoft’s shuttering of the studio. Now, almost a decade later, Microsoft has resurrected the series. As a collaboration between Halo developer 343 Industries and Total War developer Creative Assembly, Halo Wars 2 is looking to bring the genre back to consoles. Is Halo Wars 2 the resurgence of the console RTS or is this a genre that should stay PC exclusive?

Halo Wars 2 takes place 28 years after the events of Halo Wars and after the events of Halo 5: Guardians. The plot continues the story of the crew of the UNSC warship Spirit of Fire, Captain James Cutter and Professor Anders. Awaking from cryosleep, the crew find themselves at the Ark, a Forerunner installation. Receiving a distress beacon, Cutter sends three Spartans to investigate where they are ambushed by Atriox, the Brute leader of the Banished. A rogue Covenant group that rebelled during the fall of the Covenant, the Banished have taken over the Ark with the goal of exterminating the humans. Determined to prevent that, Cutter declares war on Atriox.

Halo Wars 2’s story leaves much to be desired. Character interactions and story elements are limited to short mission briefings that take place before each level, and there are only few Blur-produced cutscenes. A total of seven cutscenes were made and they are disproportionately inserted into the campaign, with the majority either at the very beginning of the game or the end. While Halo stories have always been hit and miss, they’ve always had a sense of mystery and urgency that propelled the plot forward. Halo Wars 2 doesn’t have that, but rather a series of missions that feel more like tutorials for the rest of the game. 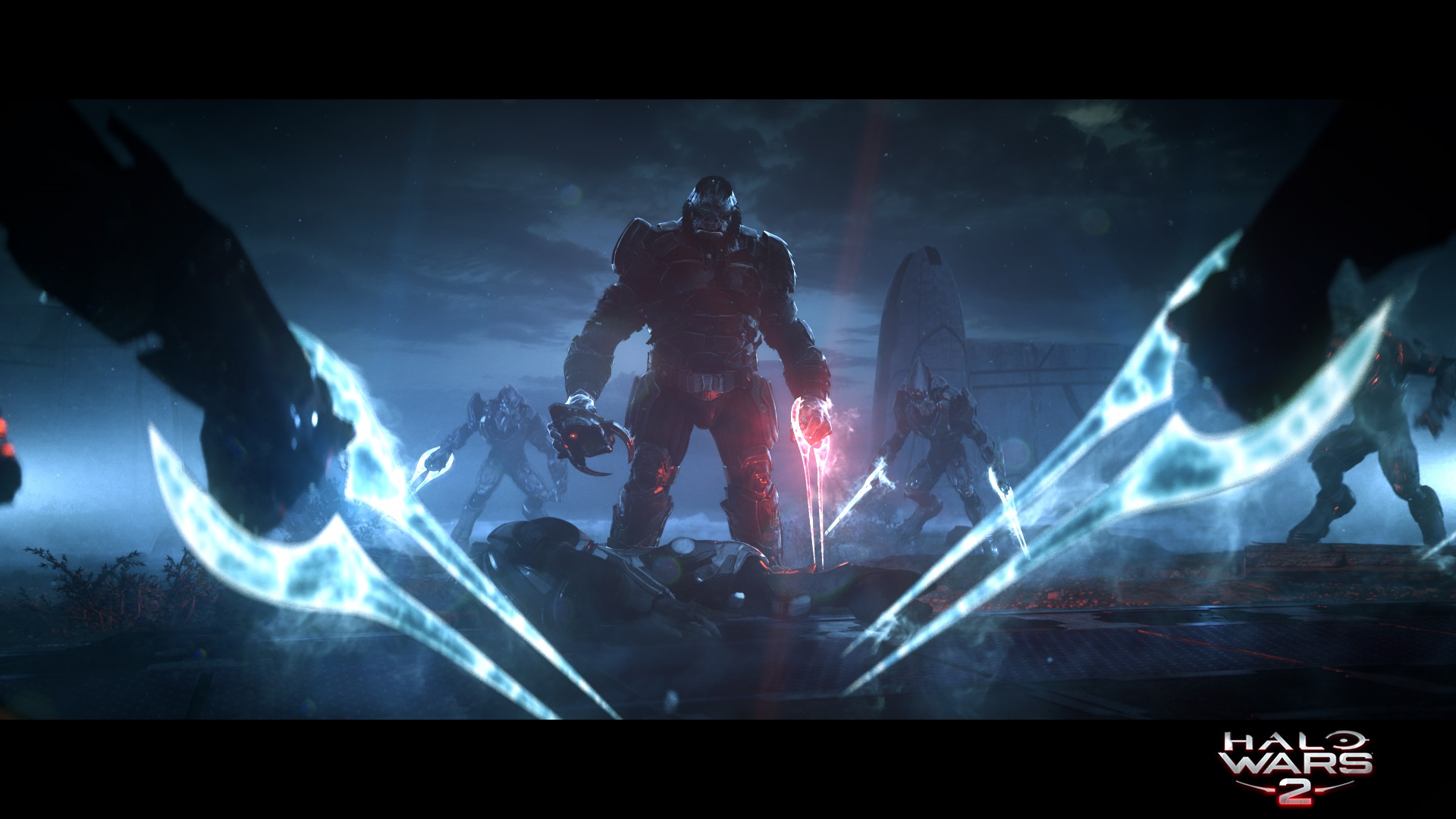 Some of this might have been mitigated if there was a Banished campaign. Atriox’s rise to power and rebellion against the Covenant is only discussed in a cutscene. Players are continuously told about how far the Covenant pushed Atriox and his men into becoming such formidable warriors, and then they finally snapped. That sounds like it could be an interesting campaign. Unfortunately, all that Halo Wars 2 provides is a UNSC campaign where the antagonists barely even show up.

Of course, Halo Wars 2 is an RTS game, and players didn’t come here for the story, they came here for the gameplay. In that respect, Creative Assembly and 343 Industries have succeeded in replicating Ensemble Studios’ formula. Like the original Halo Wars, Halo Wars 2 tries to keep things as simple as possible without sacrificing a lot of strategy. Nearly every action can be completed with two button presses. Players can tap A to select units, hold A to select all units within a radius, tap RB to select all units on screen, or double-tap RB to select every unit you own. All it takes is a tap of the X button to send units in the direction you want. Some units, like Spartans, have special abilities that can be activated by pressing Y. Spartans can use ground pound when targeting infantry and hijack when targeting vehicles. 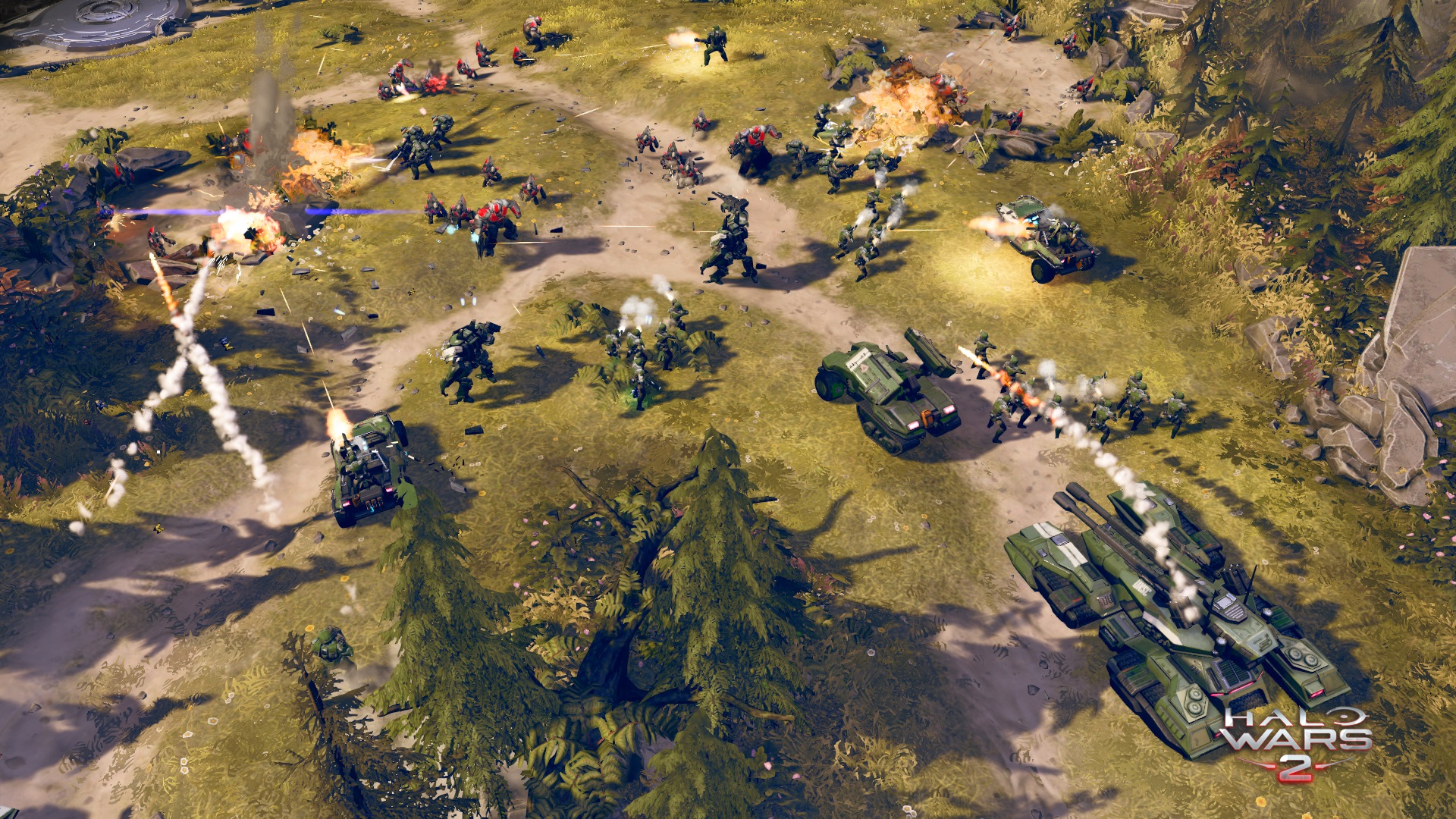 Bases and production are, likewise, streamlined to best work with a console. Bases are relegated to pre-determined locations with only a set number of building slots. While it appears limiting at first, base-building does add a layer of strategy. With only a few slots available, players will have to pick and choose what buildings to build at the time, and what is better left to postpone. Upgrading the main base does increase the number of slots available, and additional bases can be built at specific locations on the map. Unfortunately, you’ll never be able to build more than four defensive turrets. You’ll have to be very careful in deciding what types of turrets you want to employ.

Production is streamlined to two resources, energy and supplies. You’ll need both to build units, buildings, and use Leader Powers. Units can be built from a multitude of different buildings, and players can build up to a population cap of 80, which can be increased through research upgrades. All three – energy, supplies, and population – can be found on the bottom right of the screen next to the mini-map, which is part of the easy-to-read UI. Halo Wars 2 does not use a traditional RTS UI with the large command bar at the bottom of the screen. Instead, the game uses an abundant supply of radial menus for buildings, unit production, and Leader Power selection. It’s an effective solution that works well for a controller.

Overall, Halo Wars 2’s gameplay setup works, and its fun, but it does strip away some of the more strategic elements of other RTS games. Players are given a lot less control over how they manage their units, resources, and buildings. There’s no way to build squads, create formations, or tinker with how their AI reacts to different situations. As mentioned above, building is relegated to specific slots, limiting base-building options. When in tight crowds, it can also be difficult to select specific units. Considering Halo Wars 2 is using the formula of its predecessor, it’s disappointing that 343 Industries and Creative Assembly didn’t find solutions to the issues that carried over from the first game. 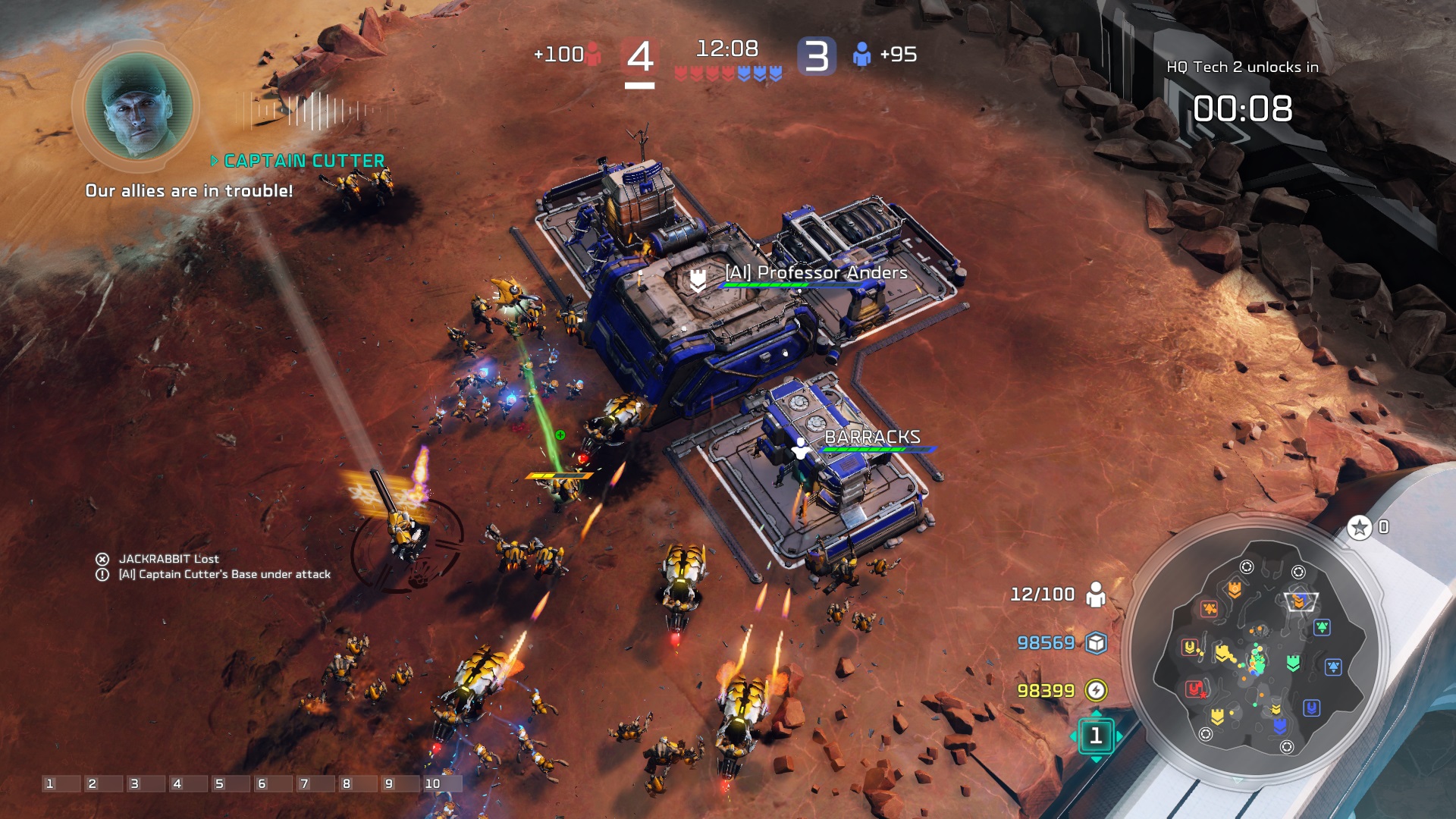 There’s a lot to see and do in Halo Wars 2. The campaign is set across twelve missions, and adequately prepares players for Halo Wars 2’s multiplayer and Skirmish modes. It’ll do a good job of teaching you the different controls, different unit’s strengths of weaknesses, and even the game modes. While the campaign is mostly a cakewalk on Easy and Normal, the challenge significantly ramps up in Heroic and Legendary. There are even Skulls to collect that will add modifiers to the game. On top of this, the campaign can be beaten in co-op with a friend, which is a nice addition.

Multiplayer has always been Halo’s strong suit, and Halo Wars 2 certainly delivers. You can take the battle online, or you can play offline against AI in Skirmish. There are a total of eight multiplayer maps that can carry a varying amount of players. In total, a maximum of six players can play a match at time.

You have two factions to choose from, the UNSC and Banished, who are essentially the Covenant in Halo Wars 2. Each faction has three different leaders, and who you pick can vastly change your strategy. Each leader brings different perks, units, and passive abilities to the table. For example, Cutter provides excellent orbital support, Isabel increases the effectiveness of vehicles, and Anders makes upgrades cheaper and faster. There’s a decent amount of variety in the leaders, but they don’t make it feel like you’re playing a whole new faction. Considering that some Promethean units are actually in the game, it feels like a missed opportunity that they aren’t a playable faction. 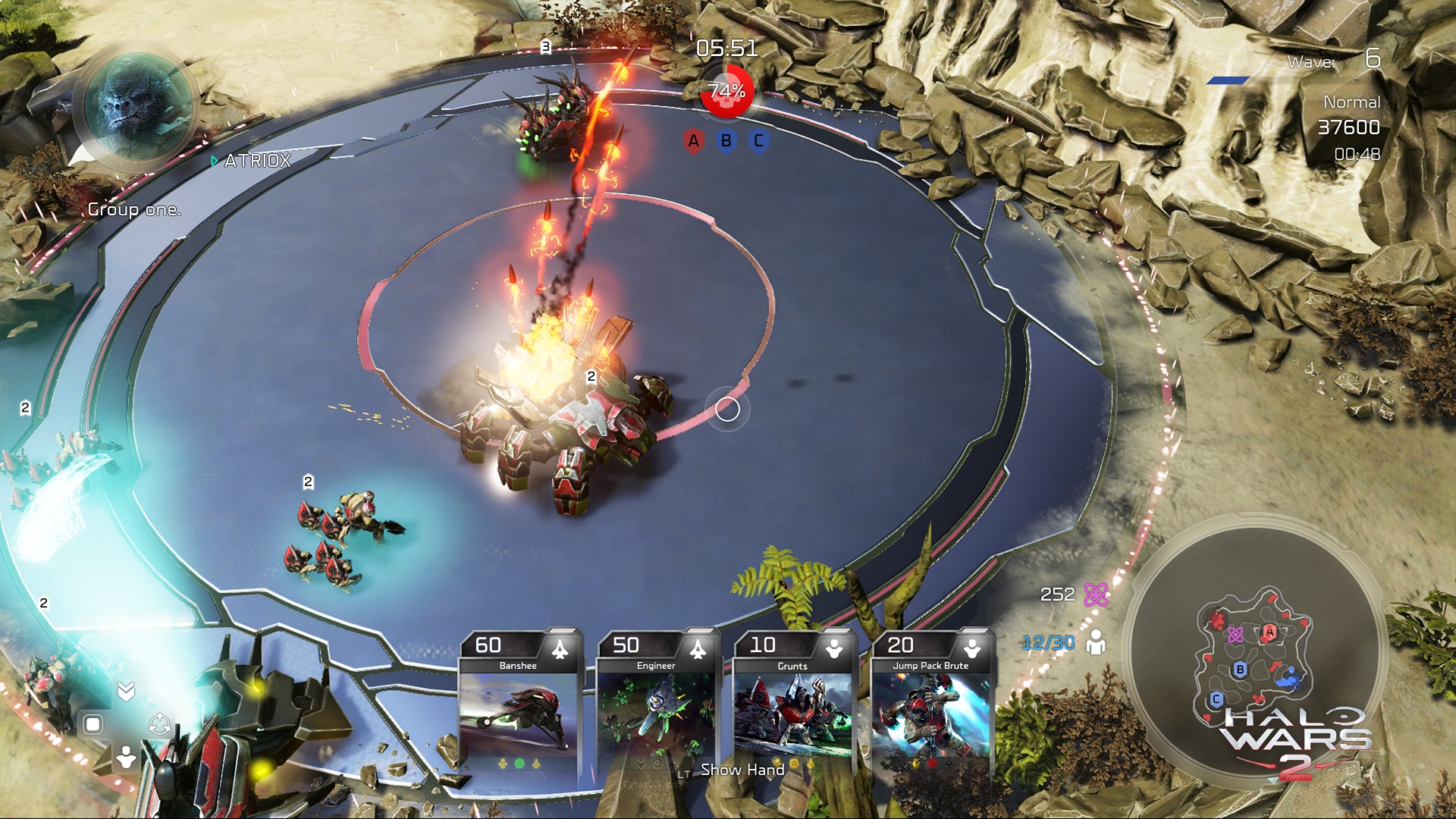 Finally, we have Blitz mode, a brand new game mode focusing on cards. You’ll receive Blitz packs for playing the game and can use those cards to build a deck. These cards can then be played in Blitz to summon units and use Leader Powers. Players will seek to capture three control points on the Proving Ground map and earn points from that. Blitz is a neat little mode, but it’s hard to shake the suspicion that it was mainly created so that Halo Wars 2 could have microtransactions. At launch, Blitz is relegated to only one map, and it will likely get old fast.

Regarding presentation, 343 Industries and Creative Assembly nail the Halo atmosphere. From the units and vehicles to the buildings and maps to the soundtrack itself, Halo Wars 2 fits perfectly into the universe. It even has a good sense of scale thanks to the hulking and intricately designed Scarabs and D81-LRT Condor. Blur returns to the franchise to create the CG cinematic cutscenes and they once again do an excellent job. Blur is excellent at conveying characters’ emotions and showcasing  amazing looking action. It’s a pity that there are only seven of these cutscenes, but what we get is eye candy.

The console market hasn’t had a solid RTS game since Halo Wars back in 2009, but that all changes with Halo Wars 2. Despite streamlining and simplifying some aspects of the genre, Creative Assembly and 343 Industries have successfully resurrected the series. The story isn’t anything to get excited about, but the addictive gameplay is. Managing an army of UNSC soldiers, vehicles and Spartans can easily make a thirty-minute mission feel like only five. It’s an excellent sequel to Halo Wars, but it does feel like the developers could have done a bit more to add more strategy and fix issues from the first game. Blitz mode is fun the first few times, but ultimately feels like an unnecessary addition that’s only there to provide an additional source of revenue. At the end of the day, however, it’s the multiplayer and gameplay that make or break an RTS game, and Halo Wars 2 checks those boxes. If you’ve ever had the itch to command an army of UNSC soldiers, Halo Wars 2 will easily scratch it.