The Neo Geo was cutting-edge hardware in the early ’90s and many of its games have held up marvelously well over time. The platform became known as the place to go for tons of fighting franchises and led to the beginnings of such classic franchises as Samurai Shodown, Fatal Fury, World Heroes, Metal Slug, and of course, King of Fighters. Sports games were few and far between on the Neo Geo, but one stood head and shoulders above the rest — Windjammers. This mix of tennis and flying discs never carved out a Punch Out!-level legacy for itself, but remained one of the most enjoyable fast-paced experiences on the market for its time.

Windjammers features a simple two-button control scheme, but deceptively deep gameplay mechanics. The stick moves you around, while one button allows you to lob the disc around the court and the other allows for precision shots. Momentum plays a large part in things as well. Just tossing the disc might work, but you’ll stand a far greater chance of landing a shot if you go back and forth with your opponent and build up the disc’s speed. The fast it goes, the less of a chance your rival has to catch it. Special moves done by charging a button also help you out – but take up precious time as well. If you’re down several points, it may just be worth it take the risk because you already have nothing to lose. As long as the disc is still in play, the round can go on past the time limit – but this is risky too because then you could just throw yourself into a deeper hole if your flashy move doesn’t pay off. 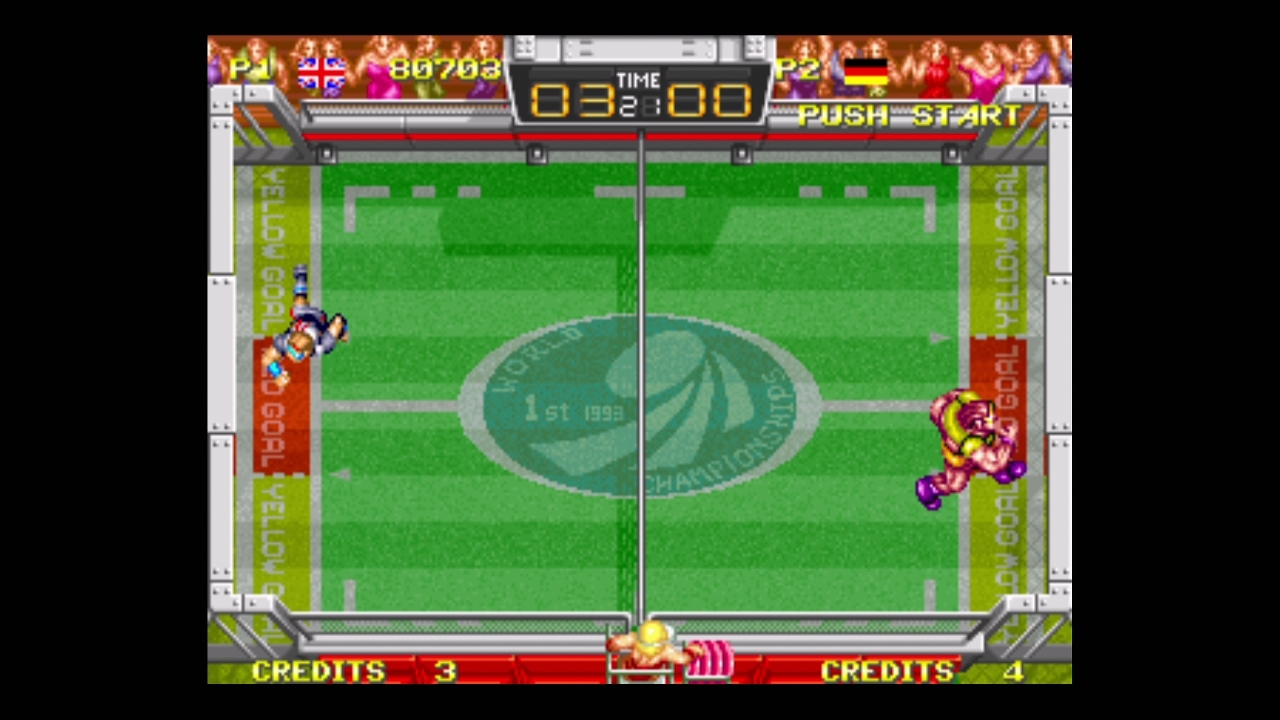 A variety of courts are available, with different surfaces, sizes, and scoring zones for each. Smaller courts are tailor-made for fast action, and effectively act as the hardest ones in the game because you have to be on your A game at all times. You have less room to move around, and thus less time to react. This is great for higher-level play because you will be tested at every play and while success is thrilling – defeat is absolutely agonizing.

The game’s point system keeps the game competitive and ensures that each 30 second period is exciting. You have to win the best two out of three periods to win.  Depending on the stage, you could have an endzone with a huge five point marker in it – with three point markers alongside it. Most are going to give you a lot of three point coverage and very little area to get a five point shot in. However, it can certainly be done and the feeling of landing that perfect shot to either tie up a game or further blowout your opponent gets your blood pumping every time. 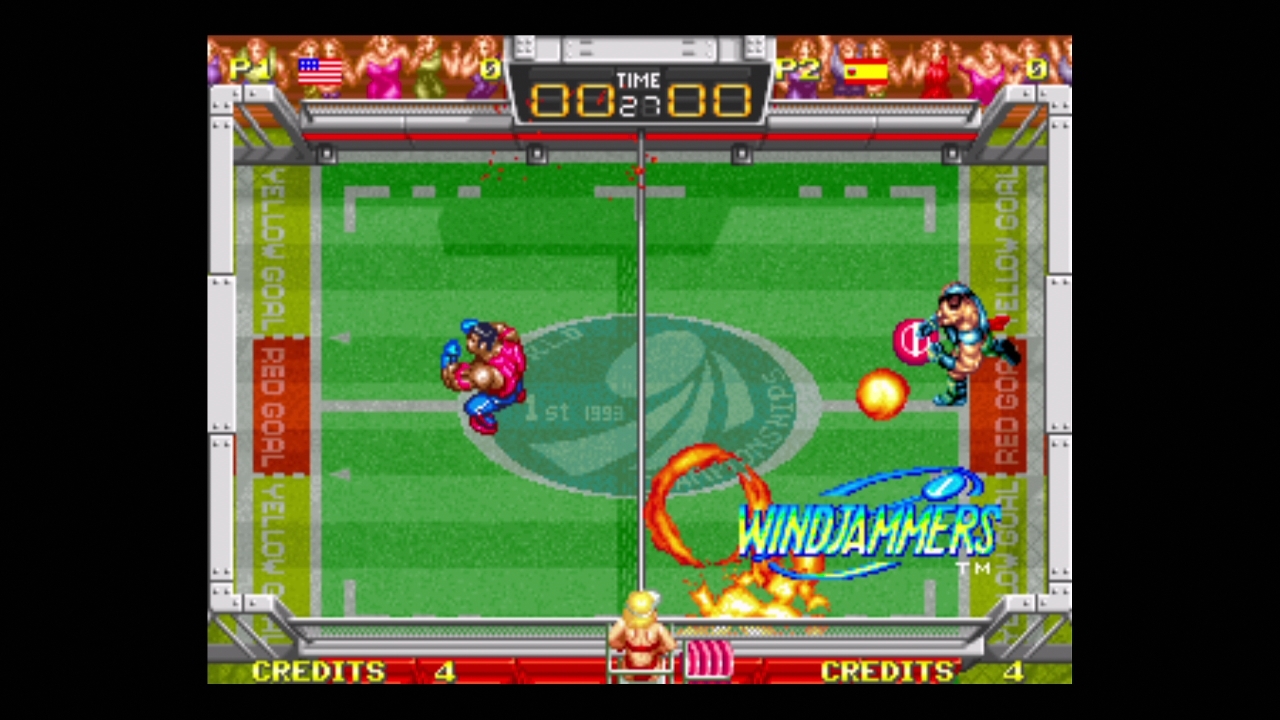 Doing well is rewarded, but making mistakes results in quite a punishment. Despite losing points via an enemy scoring, you can also lose two points by just not hitting a disc in mid-flight. You can hold down a button and charge your shot — allowing you to knock your opponent back and even send them back into the net with the disc to score huge points. The charge shots vary from player to player and no matter which character you play or face, you’ll want to give yourself some distance so you have time to react.

The core game of Windjammers is exciting and intense – but the experience is a bit more diverse thanks to mini-games. The first one sees you play as a dog and try to catch a tossed flying disc. This is basically the same principle as catching a shot in mid-air – but it’s something you may not have done after only a couple of matches, so this mini-game teaches you that mechanic quite easily. The most fun mini-game is definitely bowling. It’s essentially just bowling with a frisbee, and it is a ton of fun because you just need to aim and then just hit the pins at the right angle. You don’t need a lot of force to excel, and you can angle your shots if you wind up with a split because you can hit the pins at odd angles. It’s a shame this concept wasn’t expanded into its own separate mini-game that you could play outside of the main game.

Visually, Windjammers doesn’t stand out much – but everything it does is done very well. The art style is clean and the fighting game-style versus screens remind you that you’re in for a fight before every match. The intense action is predicated by some fast animation that remains smooth – but not so smooth that it’s too elaborate to time things easily. It’s a minor shame the game isn’t more beautiful, but the Neo-Geo’s scaling technology is put to good use with the flying disc itself. While that is the only part of the game that really uses the scaling, it is super-smooth and if it was jittery, it would absolutely kill the game. 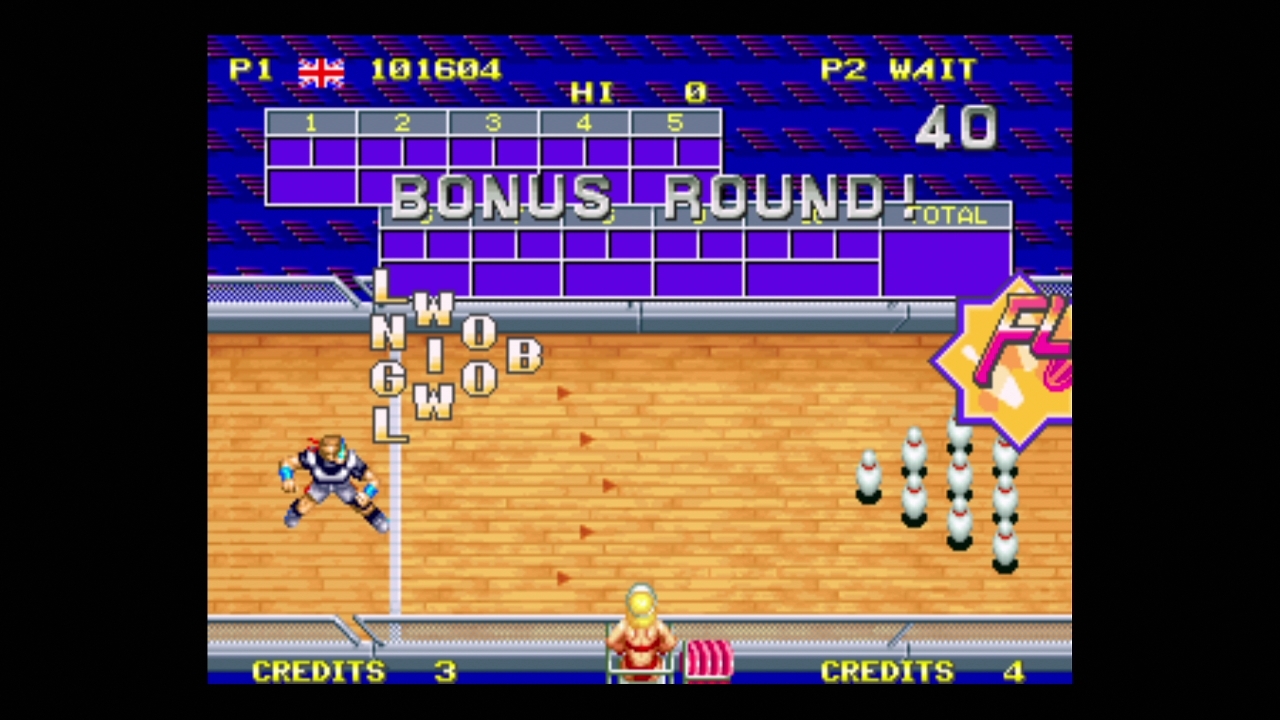 Beyond its graphics, Windjammers does underwhelm a bit when it comes to its soundtrack. It’s generic and immediately forgettable. It makes for easily listening in an arcade, sure, but it’s nothing you would want to hear outside of the game. It’s relaxed, but almost too relaxed because it leaves you feeling nothing by the end of it. Voice clips are usually limited to grunts and groans – while they’re clear, there’s no real meat to them either. The sound effect work is strong, though — especially when it comes to catching the disc after a high-speed shot.

Windjammers is a real sleeper for the Neo Geo platforms and it was pretty much doomed to obscurity forever. Fortunately, DotEmu has revived the license and will be releasing the game at some point on the PlayStation 4 with full online play. This is a huge deal for long-time fans who have never been able to officially play the game with folks across the world, and the game’s highly-competitive gameplay should make for a perfect combination with an online setup. If you enjoy pick up and play action sports games, give this a shot. It’s even a great game for casual sports gaming fans and should finally find a home in the modern era on the PS4.