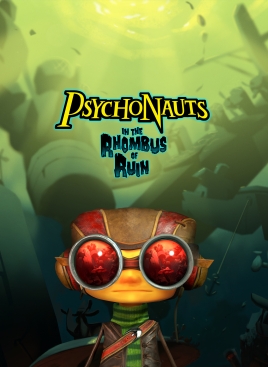 Psychonauts in the Rhombus of Ruin

You may have noticed that unlike last year, we didn’t have any individual Editor’s Choice Top Ten lists in our Best of 2016 coverage this year, largely due to time constraints. If we had made our own lists, however, I Expect You To Die would have been an inclusion in mine. The virtual reality spy game perfectly blended together classic first-person adventure game puzzles with modern virtual reality tech and a quirky, fun atmosphere to create an absolute gem. And now, here we are essentially combining a similar setup from one of my favorite games of last year with one of my favorite games of all time, Psychonauts. The first Psychonauts game in over a decade, mind you. So the question is: Can Double Fine make such a formula work without avoiding any major pratfalls and can Psychonauts in the Rhombus of Ruin deliver a satisfying VR experience on its own, all while retaining the same charm that made the original such a classic?

Set up as an interquel between Psychonauts and the upcoming Psychonauts 2, Psychonauts in the Rhombus of Ruin picks off right where the original game ended, with our main cast of Raz, Lili, Sasha, Milla, and Coach Oleander heading out on a mission to rescue the head of the Psychonauts, Truman Zanotto, after learning of his kidnapping. Their search eventually leads to the mysterious Rhombus of Ruin, which houses an abandoned Psychonauts facility, but after their plane ends up going down, our heroes find themselves trapped in the ruins and crashed vehicles within, held hostage by some mysterious folks conducting experiments. Even worse, the massive amount of Psilirium in the area is causing the others to hallucinate and become trapped even further, meaning Raz (played from a first-person viewpoint) has to use his clairvoyance to escape and explore his surroundings, find his friends, and eventually rescue Truman.

Thankfully, Rhombus of Ruin is a standalone story for the most part, so you won’t be missing out on any truly crucial plot developments concerning Psychonauts 2…well, except for a rather massive surprise at the end with a bit of a revelation concerning one character, but whether or not that bit has any impact on the sequel has yet to be seen. But for those who are here for the story, it is a simple affair centered on a rescue mission, but thankfully it still has the same sharp writing and humor that the original had, with Raz’s observations still eliciting laughs (props yet again to Richard Horvitz, always a treat), and the varying personalities of the rest of the crew allowing for some particularly amusing interactions as well. 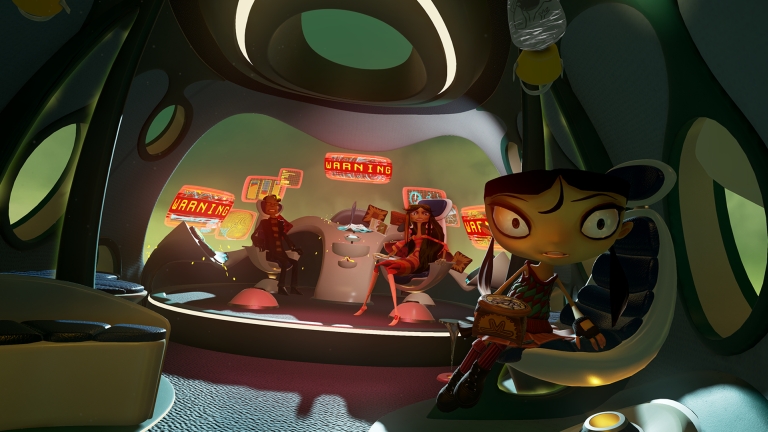 Of course, it also helps that the world of Psychonauts is yet again a visual and surreal treat, allowing for some insane sights to play off of. The comparison to I Expect You To Die wasn’t just referring to the basic gameplay concept, since Rhombus of Ruin also plays off of the classic spy film angle in several areas, from retro ’60s aesthetics to full on Bond-esque themes and guitar riffs whenever you make a new discovery or solve a puzzle. And aside from the numerous vehicles that have crashed in the murky depths providing a wicked landscape to view in VR, they also make for a great variety of places to explore, including training areas with Fischer Price-style computers to campy UFOs and pop music-themed cruise ships. And of course, being able to jump into the heads of a hallucinating supporting cast lets you experience some unique visuals that are on their minds, in what basically acts as a miniature version of the mental worlds from the first game, which even on a smaller scale are a treat.

Speaking of which, the game probably is best seen as a series of levels, where you need to solve a series of puzzles in order to advance to the next area and/or break a character out of their trance. Razputin is trapped in a chair for the game, so as mentioned, clairvoyance is the name of the game here, and while we sadly don’t get anything on par with the original game where you could use clairvoyance on every living thing to get a unique view of Raz in a brilliant Easter egg, it does allow for an easy method of navigation where you just look at a creature to highlight it and them press a button to switch to a new viewpoint. You also start out just being able to perform a PSI poke, but as you progress, new powers such as pyrokinesis and telekinesis are unlocked (the Psilirium initially suppressing powers like those), which also control simple yet effectively. 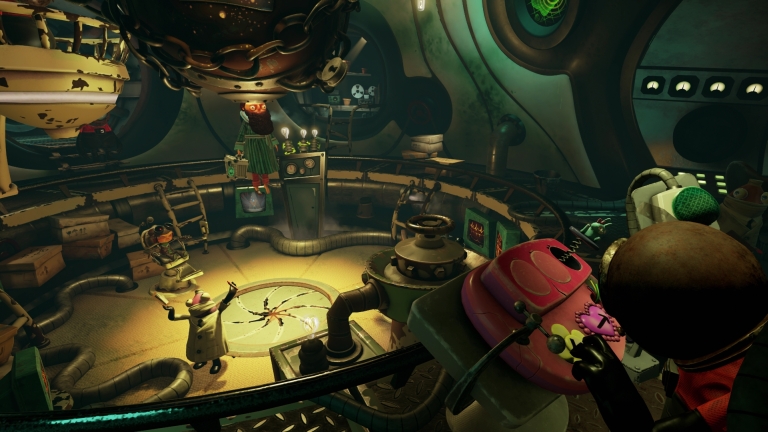 And as expected, said powers lead to a variety of puzzles to work with, be it something as simple as having to get in someone’s head to uncover a code in a comic they’re looking at, to something more complex like having to successfully move a flea into a music box with your mind so that you can use their viewpoint to fix the mechanism inside. It is pretty much a linear affair mostly focused on the the story and experiences of each character, but even the simpler puzzles are a treat to work with, providing an enjoyable, easy-going adventure. And of course, you are given several moments where you get to gleefully dick around with things and experiment with your surrounds, this being a VR game and all. Be it popping balloons with fire or screwing with anti-gravity settings, there is a good chunk of fun stuff to check out. Really, it’s just damn fun to try out all these classic powers in VR.

Concerning any flaws Rhombus of Ruin may have, you may expect the short length of about two and a half hours to hurt it, but while I would have liked to keep spending as much time in the world of Psychonauts as much as possible, it still felt like it contains all of the mental action needed to tide gamers over until the sequel (and one expects a relatively smaller VR adventure like this to not be the longest ride in the first place). No, the flaw here was that even with a short length like that, there’s still some padding in the form of using clairvoyance on fish to travel between areas. You just sit there, wait for the next fish to show up, get in their head, and keep moving. And aside from one minor puzzle early on, these parts with the fish really have zero challenge or gameplay. The transition between setpieces could have been handled better, is what I’m saying. the exception is a part where you have to guide Lili through a train full of obstacles, which worked quite well.

Then again, that part contained a sliding tile puzzle, which I automatically have to dock points for whenever it appears in any game I play. Sliding tile puzzles, the jump scares of the adventure game world. Bleh. 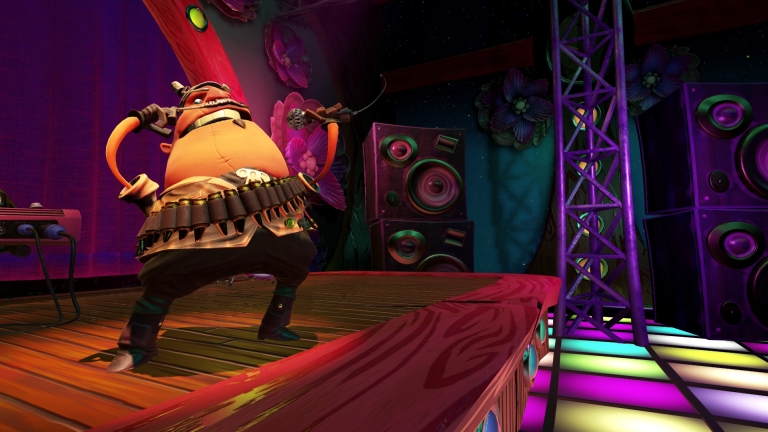 Even if our first follow-up to one of the most legendary games ever made is a more relatively small-scale PlayStation VR game, Psychonauts in the Rhombus of Ruin is still an absolute treat indeed, and a must-play for anyone who owns the peripheral. It may be a bit of a quick journey, but the gleefully mad yet beautiful world, fun gameplay, and the return of some truly lovable characters and their witty dialogue makes it a journey you won’t forget anytime soon (especially with the final section of the game, which will blow your mind in more than a few ways, pun semi-intended). Welcome back, Raz. We’ve missed you, and you came back with one damn fine game indeed. Now bring on Psychonauts 2 next year!