It’s hard to be a good parent. Kids are a handful and need to be constantly watched over to make sure they don’t get into trouble, so it’s important to keep a close eye on them. Therefore the safest place for a child to be when its parent is out bicycling is securely strapped into a child seat, and if a spinning sawblade eviscerates the youth, then at least it won’t happen unsupervised.

Guts and Glory is a game about riding or driving a vehicle carefully through a series of obstacles that all have the single purpose of slicing, exploding, piercing, sawing or otherwise dismembering you into a chunky mess of spurting body parts. Drive through a spike at head-height and stay there impaled as your vehicle drifts off down the course. Hit a mine just right and the camera will follow a chunk of torso as it flies high into the air, streaming bloody particles behind it. Slightly graze a sawblade and there goes an arm, although odds are actually pretty good that last one is less of an inconvenience than losing a tire. You can control a vehicle pretty well with a missing limb, but damage the steering badly enough and it’s worth resetting to the previous checkpoint. 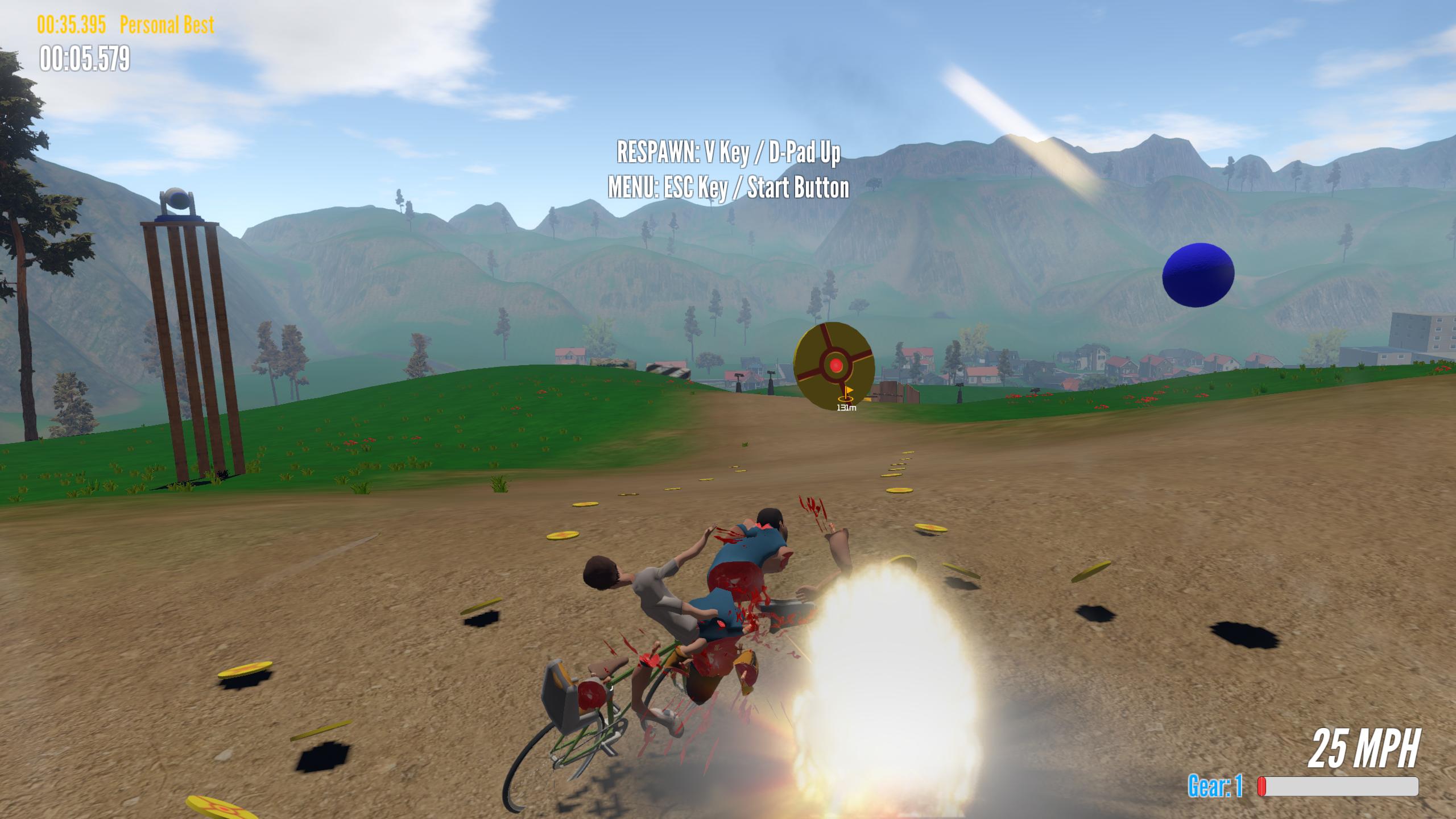 In its current build, Guts and Glory has three people to play with, each with their own vehicle. John and Jimmy are a father and son duo travelling on an incredibly vulnerable bike, the Yang family drives down long, winding roads in the car, and the redneck Earl at least has the good sense to not subject anyone else to the bloody carnage by riding alone on his ATV. The vehicles all handle differently, with courses designed to take their strengths and weaknesses into account, but odds are good no matter which one you choose it will be drenched in blood by the end.

Take the bicyclist John, who’s the main character for the earliest levels. He’s not particularly fast but very agile, to the point of being fairly twitchy in his handling. His levels are set in a small town that would be a lovely place to live if it wasn’t for all the traps lining its streets. The course structure is set up with two kinds of checkpoints- ones that you can reset to and others that just act as the next marker to aim for. The bicyclists challenges are designed around his slower pace (which is still pretty zippy) and agility, but Jimmy riding on the read child seat isn’t strapped in very securely. Dodging a sawblade is always a good idea, but do it wrong and John will be fine while Jimmy learns how parental neglect can lead to deapitation. Which, it’s important to note, comes across as brutally funny when it happens. 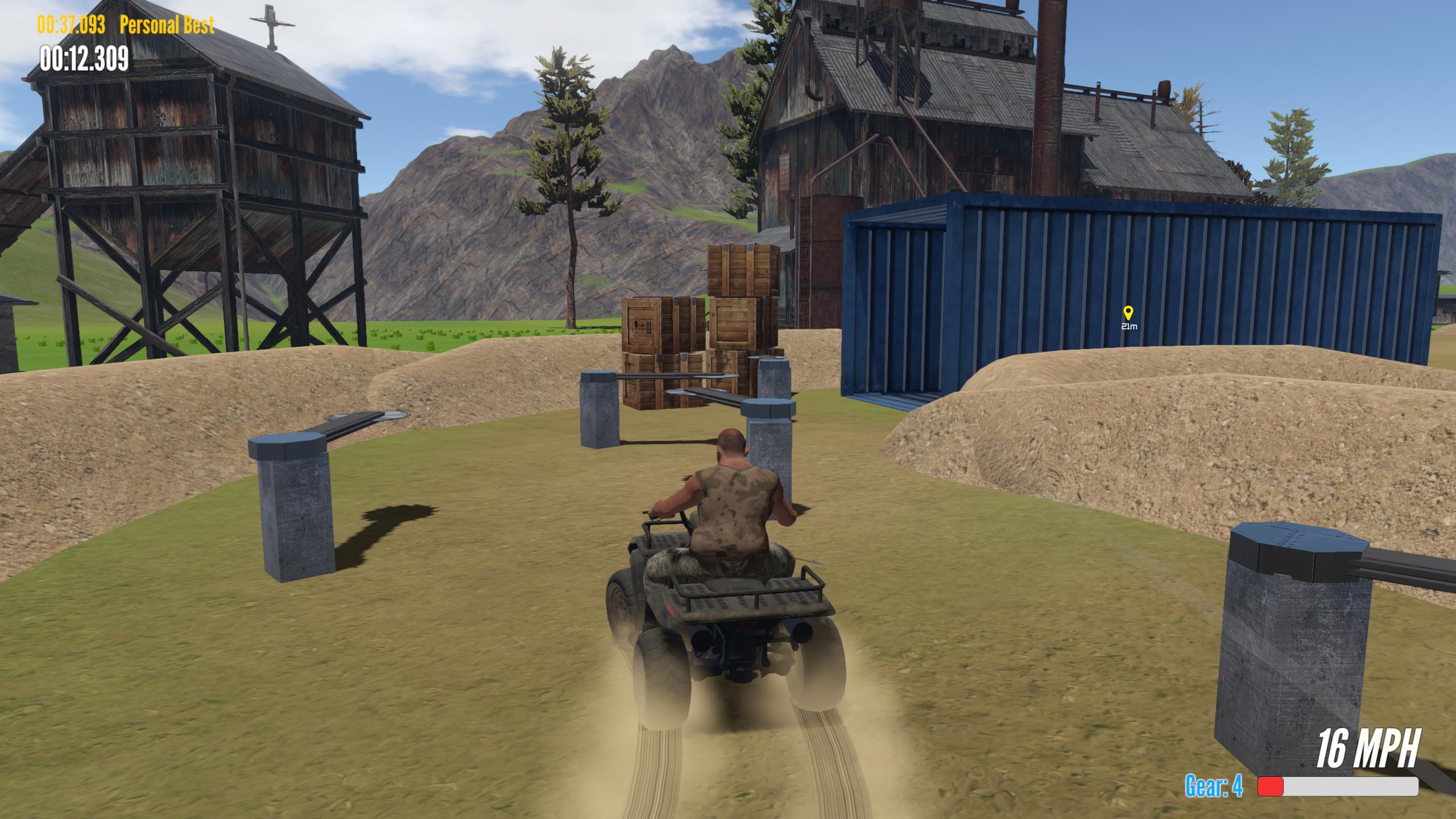 Guts and Glory is the kind of game where failure is designed to be just as entertaining as victory, if not moreso. On the one hand, navigating a thin strip of mines is tricky on a bike, but having your kid fall off and land on a mine, causing an explosion that starts a chain reaction running down the strip and eventually blowing your head clear off your body is just plain funny. Cheap and unfair, sure, but mostly funny. It gets even worse/better in a car with wife and child as passengers who just can’t be bothered with seat belts, especially after an accident when their body parts start sloshing around.

It’s lightly shocking for a bit, honestly, but that wears off pretty quickly leaving behind a morbidly amusing obstacle course run. Cannons and sawblade-launchers line the tracks, mines show up in unexpected places, boards with spikes placed at head-height make navigating a muddy course with low traction much more dangerous than normal, and even landing a jump wrong can break the driver. The crew can take a beating, frequently riding along with arrows sticking out all over, but they’re a strange mix of tough and fragile. So long as they can limp over the finish line it will work out fine, though, with all limbs reattached and family members resurrected for the next level. 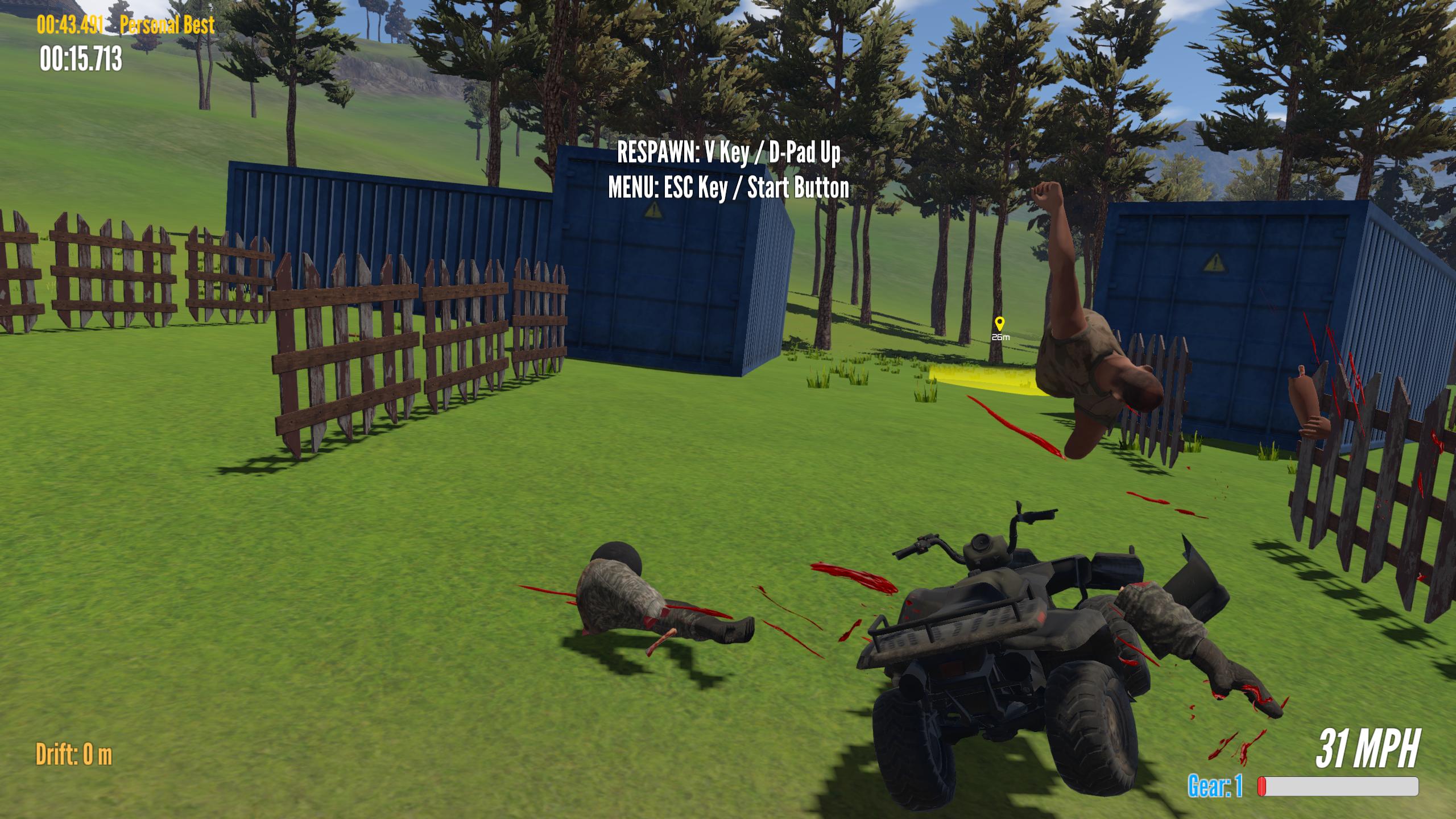 While the core gameplay is fairly solid, it’s hard to ignore that Guts and Glory is a bit rough around the edges. The jankiness is part of the charm, but some aspects work less well than others, especially in regards to the graphics.  Normally I’d say “art style” here, but with the amount of clipping and other model warping going on it’s hard to point to the bland textures and basic character modeling as the only culprits.  Guts and Glory desperately needs of an artist and a little technical loving to iron out the parts that cross the line from amusingly cheap to visually busted.  Accidents are supposed to be horrifically violent but when the blood pool looks like a coat of fresh paint and the character model’s arm stretches out eight feet long instead of breaking it just doesn’t work.

Guts and Glory nails its primary goal of being a ridiculously violent obstacle course, even in this early state.  The levels have a nice variety of challenges, and the open hills and mountains of Earl’s ATV levels play differently from the long, twisty roadtrip the Yangs power-slide through.  The level design ranges from relatively easy to “endless restart,” but the courses are short enough that even the toughest ones can be practiced to the point you can clear them in a reasonable amount of time.  If beating the level turns out to be too much trouble, though, it’s always fun to find the most brutal way to murder your character, as the blades, spikes, cannons and explosives turn the run into a gore-soaked track littered with body parts.  Whether those tracks are the handful of official ones, the much bigger collection created by an active community using the built-in level editor, or even ones you’ve created yourself is all down to how much exploring you’d want to do, but there’s plenty of challenge to explore.  Guts and Glory is a big, bloody mess of a game, and it’s only getting more brutally ridiculous as it grows.