During GDC 2017, we were able to get an extensive look at what Warner Bros. Interactive lineup of games for the remainder of the year. One of these games was Injustice 2, and we were able to talk with NetherRealm Studio’s Senior Marketing Game Manager, Brian Goodman, about how they’re innovating on their own formula.

[Hardcore Gamer] We’ve seen a lot of character reveals and trailers, but the story still wrapped up in a bit of mystery. Can you set up Injustice 2 for us?

[Brian Goodman] Absolutely. You guys got a chance to look at part of the first chapter here today. We are picking up where the events of Injustice: Gods Among Us left off, so we’re looking at the direct aftermath and then we’re jumping forward a bit and going to see how the fallout from the battle between Batman and Superman sort of left the Injustice universe in a bit of chaos. While they’re both trying to marshal their forces and figure out what the next steps are, there’s a few more twists and turns coming their way.

Yes, he’s coming in and, while pushing their own agendas, Batman and Superman, and their respective allies, are trying to figure out the best way to deal with this new threat. 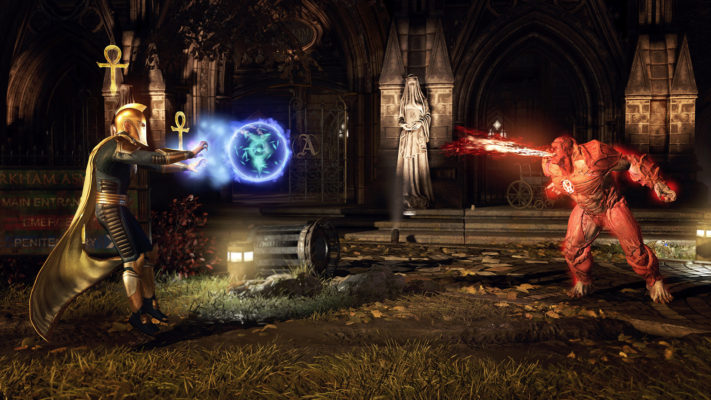 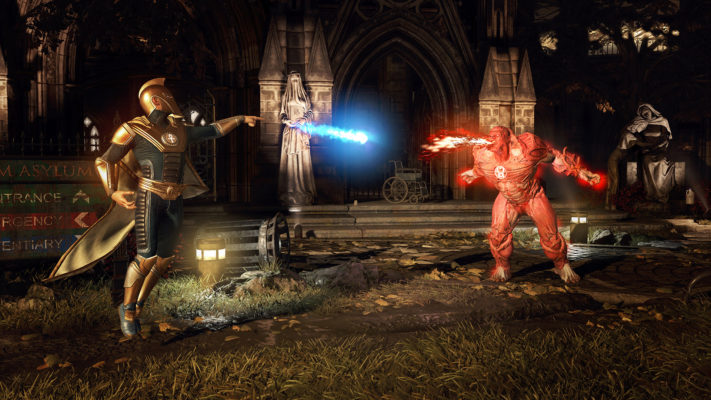 The first Injustice you introduced the clash, the super moves, and with Mortal Kombat X, you did the different variations. How has your learning experience with both games informed Injustice 2?

Yea, absolutely. One of the things we’ve sort of continued, like you said, with Injustice 1, introducing new elements and then expanding upon that with MKX. Variations was kind of a step for us in giving a little more anatomy, giving a little more control over the player’s aim, and feeling out how they want to play their favorite characters, and giving them more options to do that. With the introduction of the Gear system in Injustice 2, I think that is an evolution of that same sort of philosophy of handing over more choice and control to the players so that, along with customizing how the characters look, you get the sense of being able to customize how you approach the fight. You’re customizing how the characters you like to play are actually playing by focusing on difference stat loadouts, focusing on special moves and abilities, and really enhancing your approach to the fight with even given characters.

So, for us it’s really, every game we try and take steps to give even more options, more choice, more control to the player. We obviously we take great care in crafting a well-designed and well balanced fighting game, but for both that hardcore audience who can really dig into the mechanics of the game, giving them different ways to boost their strategies and boost how they kind of approaching the fight style of each character. For the more casual fan, we wanted to make sure we’re taking care of them, as well, and giving them a lot of options for the sake of variety. There are several different ways to come up of mastery of this game, whether creating the coolest looking character or really digging into the system and trying to make sure every fighter you fight with really developed within your own vision.

When Injustice 2 was announced, and when you announced there was a gears system, on paper, a lot of people came to the conclusion that this was a reason for you to put microtransactions in. To assuage fears, could you talk a little about why this is not pay-to-win?

Yeah, it is absolutely not. There is no function within the game where you can pay real world money for anything in this system, for the gear. Because we have attached stats and abilities to the gear, obviously there is the opportunity to gain advantage by equipping pieces of gear to your character, and because of that, we absolutely did not want it to drift into any sort of pay-to-win system. You can only earn these pieces by playing the game. They are dropped randomly throughout all the different modes. You can earn in-game currency, which is not tied real world dollars, and you can trade that in for motherboxes, which is essentially this game’s loot crates, and that has combinations of gear, shaders, and abilities. So, we definitely wanted to stay away from that possibility because, that’s not why we built the system. The system was built to enhance the enjoyment of the game and give people a reason to keep coming back. 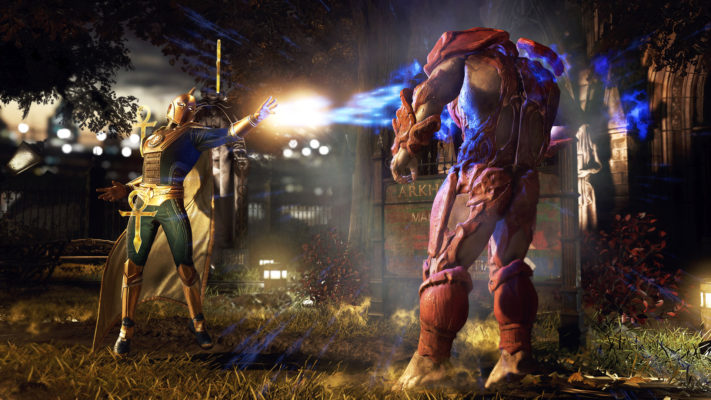 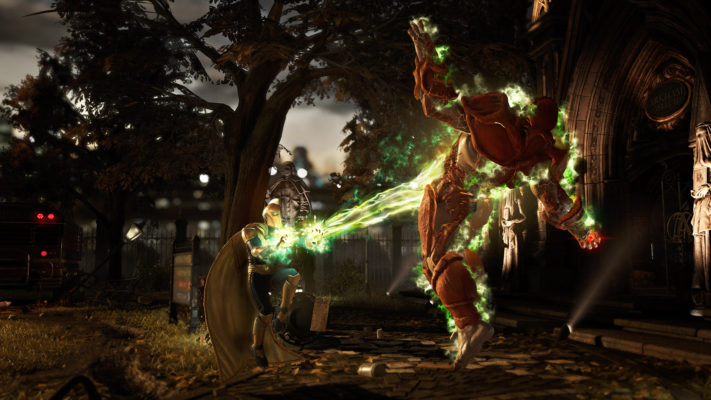 Well obviously, it is a large group process that has a lot of voices in that conversation. There’s always someone is going to be championing for some such character in the game. What we do is, a lot of people in the studio, collaboration with DC, we have a few things that really drive those decisions and one of them is story. When we figure out what story we want to tell, certain characters are going to service that story better than others and we want to make sure that’s one of the factors. Obviously listening to our community, no matter what, every fighting game, at some point you have to cut off how many characters you can develop, so there’s going to be an outcry for someone’s favorite character. When we see there’s a huge outcry from the community, we want to make sure we’re servicing that. For our own creative sensibilities of getting a mix of the deeper cuts of the DC universe and giving some fan service to the maybe lesser known characters, and then obviously, our game designers creating fighting style that service a fighting game, as well. You can look at the lore and look the character’s personalities and the fighting styles they’ve always had throughout their own storylines outside of the Injustice universe. All of those factors taken together dictate the main pool characters we start choosing from, and then it’s a series of debates to whittle that down to what we’re going to move forward with.

The DC Extended Universe is going on now. Have you taken any inspirations from those films? I know Harley Quinn and Deadshot were both announced around Suicide Squad came out.

Inspiration and everything, it all goes back and forth. What’s interesting about these characters is not only the ebbs and flows of when they’re taking prominence, but there has been so many different permutations throughout the years. We’re really fortunate in that we’re creating an interactive experience with these characters, so we get to inspiration from everything that has come before, and take that and do our best to create something original, as well. As you mentioned, we announced Harley Quinn and Deadshot around the same timeframe when the movie was coming out. Those are just great opportunities that are presented to us because we’re working with DC, we’re part of Warner Bros. so, those opportunities we just try and jump on when they’re presented to us. 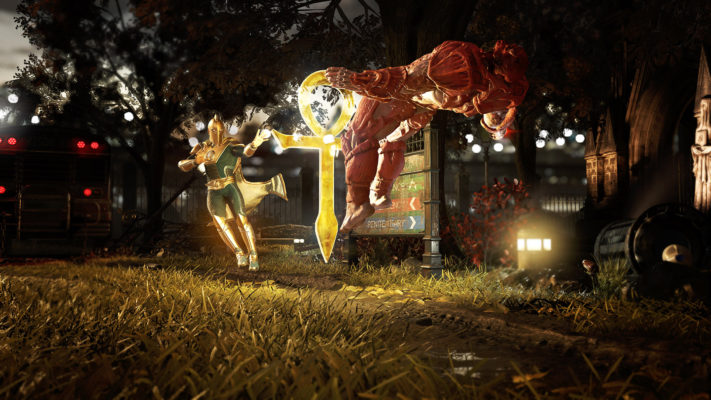 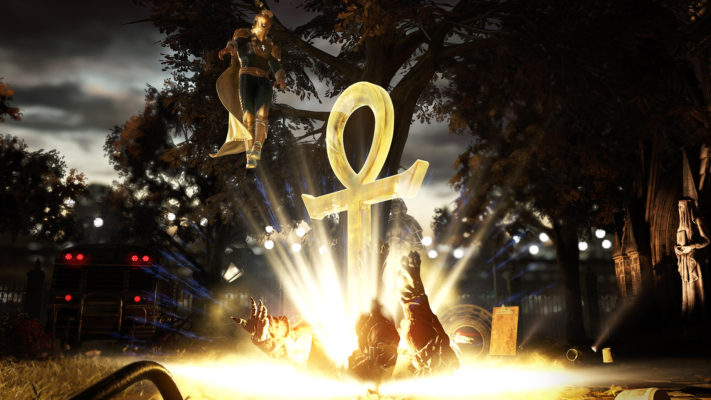 Final Question: A few years ago, DC released a comic in the God of War universe. Have you ever thought about bringing Kratos back?

We did Kratos in Mortal Kombat 2011 – very popular. I can tell you, without divulging where our heads are at, that hasn’t come up. Kratos was an awesome character in of itself, but also when we were able to bring him into Mortal Kombat. First off, we had such a cool working relationship with that team and it makes for a great fighting game character, but yeah, nothing I can divulge on whether or not Kratos will show up in Injustice in anytime in our lifetimes.

Injustice 2 will be available May 16 for PlayStation 4, and Xbox One. Read our preview of the game here.