Warhammer 40,000: Dawn of War returns to PCs on April 27 with the release of Dawn of War III. Hardcore Gamer got the chance to try out the game’s multiplayer mode, and interview Phillipe Boulle, game director for Warhammer 40,000: Dawn of War III. In our sitdown, we discussed the different factions, improvements and what all players are getting at launch. Be sure to check out our preview to learn more about the game’s multiplayer.

[Hardcore Gamer] Set up Dawn of War III. How much time has passed since Dawn of War II, and what have the different factions been up to?

[Phillipe Boulle] When we last left the Blood Ravens, the Space Marines, they had just gone through a big schism in their chapter. Gabriel Angelos had become their chapter master, but had become suffered greatly and was reduced to a torso by the end of the game. Since then, the Blood Ravens, and Angelo, have been rebuilding themselves. He has a full cybernetic body now, and is responding to a threat in the Cypress System where this mythical planet is supposedly going to reappear, and on it is an even more mythical weapon called the Spear of Khaine. This brings him into conflict with people he has run into before and new characters.

For the Eldar, we’re bringing back Macha the Farseer who was from the original Dawn of War and hasn’t been seen since. In the first game she was in charge of an Eldar expeditionary force, and now she’s in a second-in-command position. Her boss sees this Spear as the key to bringing the Eldar back from the brink of extinction. Macha has a cynical side to her and realizes that everything isn’t what it seems.

Then we have Orks, and we catch up with Gorgutz who is one of our popular Ork characters from the original Dawn of War expansions. He’s just after a big fight, and he’s really excited about the possibility of getting his hands on the big weapon and causing some real destruction. 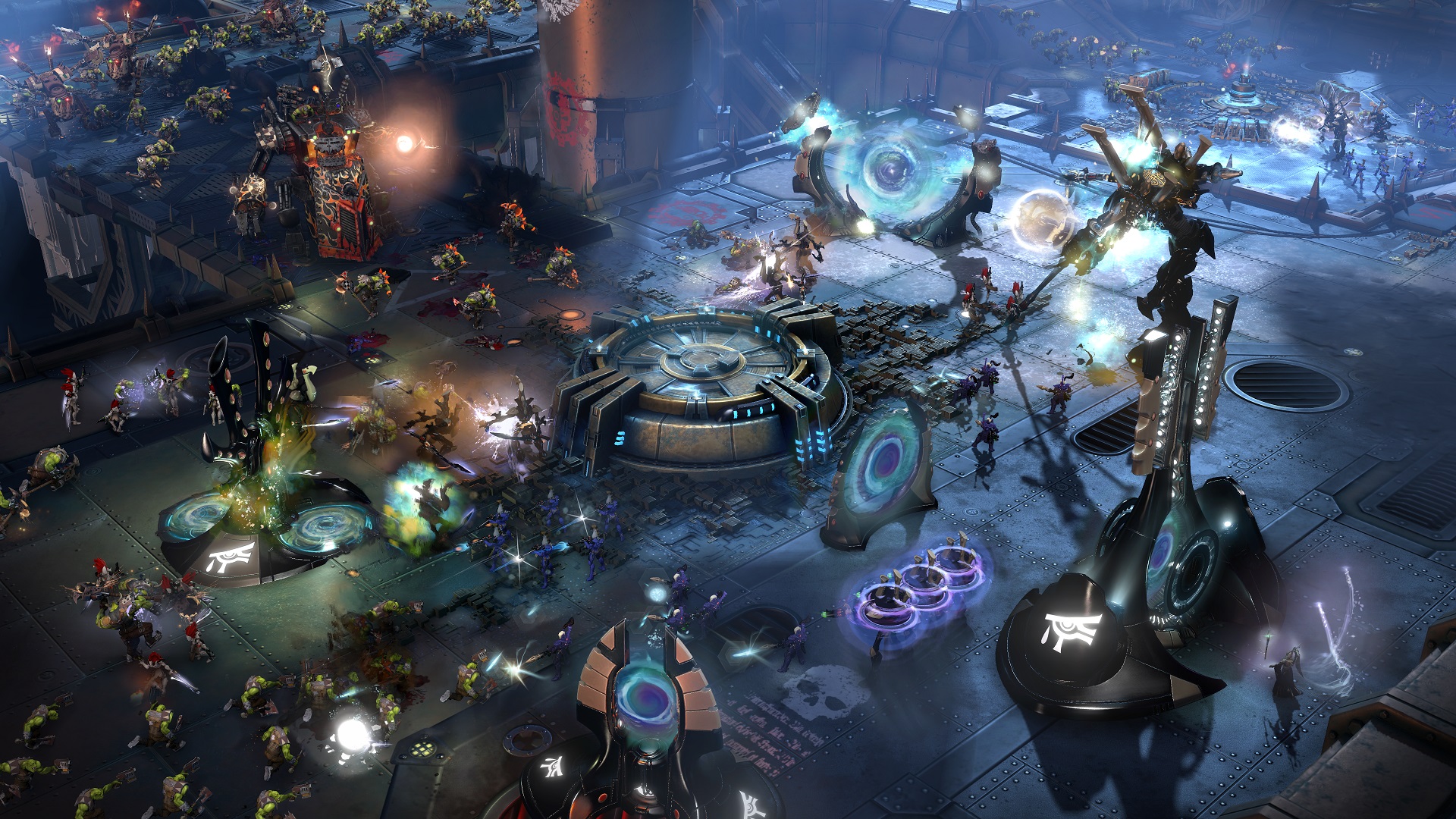 So,we have three playable factions. Does that equate to three campaigns?

We have one 17 mission campaign that rotates between the factions. That allows us to look at different perspectives. It also allows us to create a campaign where you get exposed to all three factions. So, when you transition to multiplayer, you’ll know how each faction functions.

In terms of multiplayer, break down the three factions. What sets them all apart?

One of the things we really wanted to do with Dawn of War III was make sure sure each of the three factions had a lot of its own character, felt and played differently, and had their own mechanics. I’m really proud of what we have.

So, the Space Marines are a tide-turning faction. They have more expensive, tougher units so you have fewer guys on the field, but they’re a little more powerful than the other factions. They also have a lot of abilities that allow them to go from losing to winning in the blink of an eye. For example, drop pods allow Space Marines to drop reinforcements from orbit anywhere they have line-of-sight. 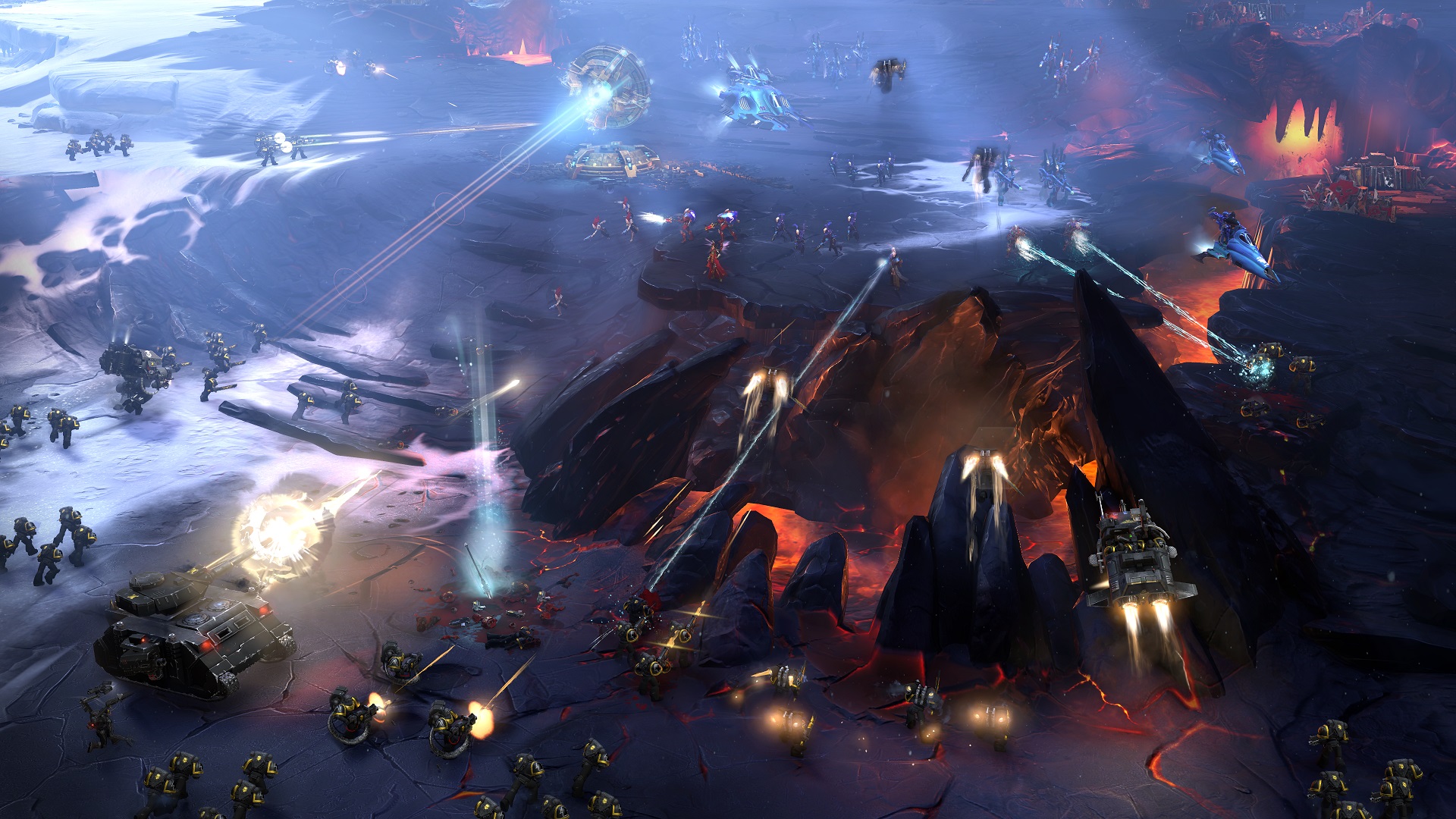 What about the Eldar and Orks?

The Eldar are like a space samurai and they are all about mobility and hit-and-run tactics. If you like tricking your opponent then the Eldar are the faction for you. They’re big mechanic is the Webway Gates that project an aura around the battlefield that make your units move faster and healing them. As they level up their tech, they’ll be able to warp around their buildings and create warp gates between buildings.

I think the Orks are one of the biggest accomplishments of Dawn of War III. We’ve always done the Orks as a mass-horde that is then thrown at the opponent, and that’s part of the equation here. They are the ‘maniac-horde,’ but we’ve introduced an economy around scrapping. So, the Orks can build these towers that call down scrap metal from orbit that they can build stuff with. When destroyed, vehicles will drop scrap. Every Ork unit can loot scrap to upgrade themselves.

We have the luxury of a bit of time between finishing Dawn of War II and developing Dawn of War III. We looked at it to see what stood the test of time, what people remember fondly, what works really well, and so on. From Dawn of War we have the big armies and the base building. From Dawn of War II it was the interesting heroes we wanted to bring forward. At a higher level, one of the things we really wanted to do was double down on our ability to deliver the fantasy of having crazy, over-the-top armies. We want to not only bring back some of the stuff we did before, but also make the biggest space laser we’d ever done, add units that were larger than anything before, and just really sort of raise the bar.

In terms of the lessons, a lot if it came down from looking at the low level things. We wanted to make sure we were making it easy for players to understand the unit relationships. Unit responsiveness and clarity of abilities were some of the things that were a little more obscure in the previous games. 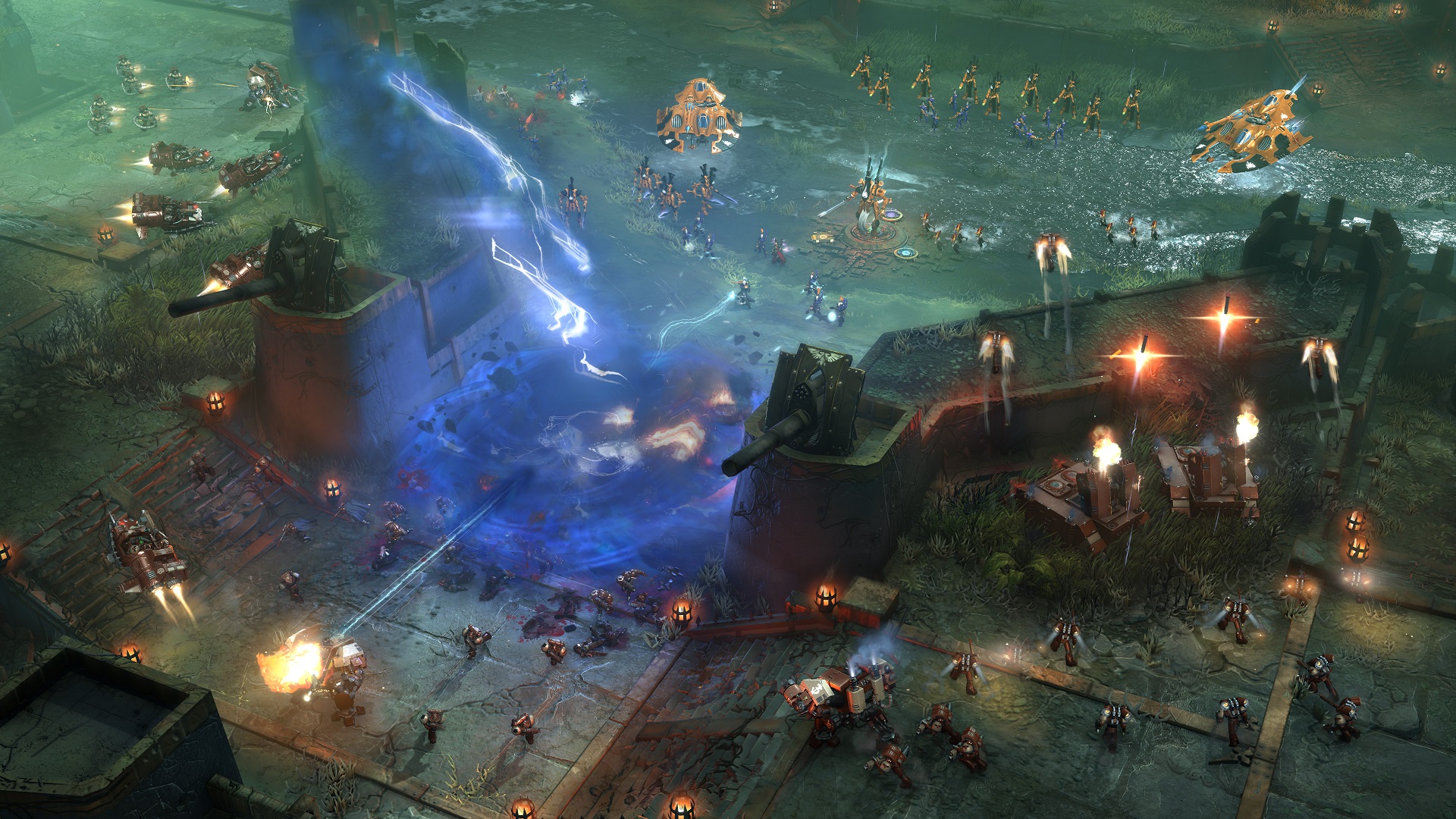 How many players can fit on a Dawn of War III map?

Our biggest multiplayer maps are 3v3, and that sort of is our signature mode, but we do support 2v2 and 1v1. We also have AI bots players can fight against.

How many maps are players getting at launch?

We’re shipping with eight multiplayer maps with plans for more. We took the approach of creating a nice variety of maps and polishing them so that they’re balanced.

Can the maps be tailored to a certain amount of players, or are they set as-is?

You can’t add extra players to the 1v1 and 2v2 maps. However, you can play the 3v3 maps with fewer people, but they do shine at their specific sizes. This is because the economy scales and spacing of the maps scale. When you have only two armies on a really big map can be not as exciting as you want it to be. 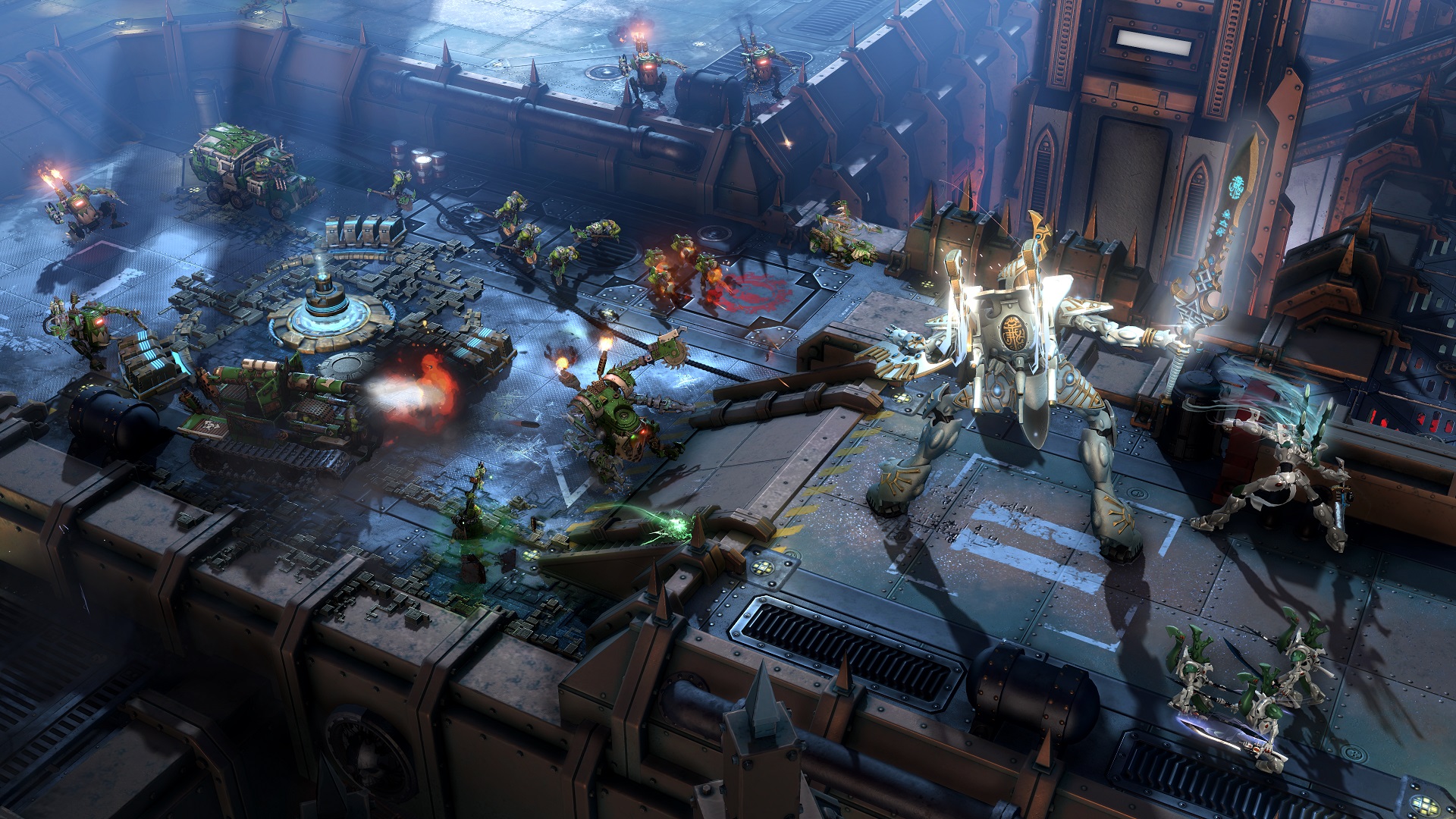 When can players expect to get their hands on Warhammer 40,000: Dawn of War III?

No plans for a Mac release?

Not yet, no. We’d love to do it, but we don’t have anything to announce yet.

Be sure to read our preview of Dawn of War III’s multiplayer mode here.