Some people know early on what they want to do with their life. Become a leader of men, dedicate their life to environmental conservation, push the boundaries of technology; many have a goal in mind for how they want to make their mark upon the world, leaving it a better place than they found it. Others might not be so lucky, languishing for a central dedicated goal. I was one of those, but no more. With clear eyes and steeled heart, I now know why I was placed upon this planet, the meaning of my existence, and this very post is the first step on the road of the crusade. That cause that will drive the essence of my being is this: convince Marvelous to localize the PlayStation Vita title Uppers, developed by Bullets, for English-speaking audiences. There is no need to praise me, nor am I searching to be granted sainthood by any major religion. I do it because it is just.

My recent discovery of Uppers was intentionally accidental. There are times when I come across a proprietor of import games. With the region free stance that console makers have taken, it provides an opportunity to stock up on items that don’t make their way stateside. This is, admittedly, quite stupid as I do not speak Japanese and often find myself snagging things with minimal real knowledge either because they look interesting or as a collector. Occasionally I find some gems, like Puyo Puyo Tetris, or befuddling oddities, like Bullet Girls. Uppers manages to be both. 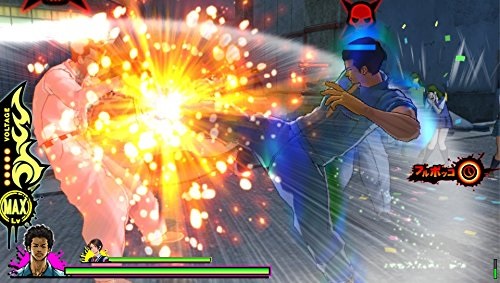 As I don’t speak Japanese, I couldn’t tell you the plot. Sometimes the player is playing a mission as two brothers, sometimes other characters. I think it’s about a group of street toughs that are fighting to earn the right to judge a panty contest. This (obviously popular) potential profession has many aspiring applicants, with the selection process determined by fisticuffs. The person who wins the current round of selection in a specific way that satisfies the panty contest contestants is granted a note by one of the contestants which might be a vote of confidence? The sad thing is that I’m only being slightly ridiculous; the mechanics fit my theory. I do know the brothers beat up a group of bullies at one point and it is possible to activate something called “Panty Slots” which can result in winning panties. Glorious panties.

That isn’t why Uppers is great, though. That stems solely from the gameplay. In essence, this is an old school brawler modernized with 3D graphics and a heavy manga style. Players traverse various stages beating the ever loving hell out of any adversary that crosses their path, building up a Voltage meter to unleash super attacks. Each punch and kick thrown has weight behind it, with an almost palpable feeling when a strike connects. Bullets absolutely nailed the audio/visual feedback of the combat, giving it a meaty, over the top feel. Even though the fighting is appropriately chunky, there is still an element of acrobatics, with moves like being able to kick three chumps while spinning on a streetlamp only to let go and transition to a wall run, jump off, and jump kick another two fools in the face. 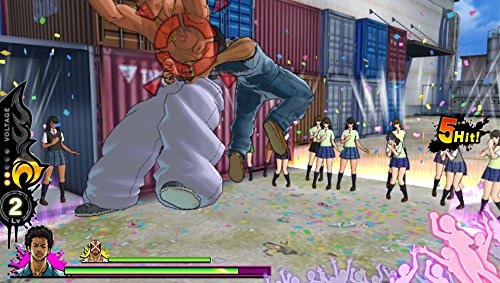 That’s not even factoring in the environmental interaction. Many walls are only there to throw morons through, sending them crumbling down. Entire groups can be taken down by destroying the floor beneath them. There are opportunities to slam dunk people through hoops, kick desks into an idiot’s face, throw a motorcycle like a paper airplane at a fool, and more. This isn’t super high tech stuff, but the developer made sure to toss in all sorts of fun ways to win a fight without even factoring the over the top Rise Up special moves.

There’s quite a bit going for this game and it’s something that really needs to see its way westward. It doesn’t seem impossible, as the trophies are already translated into English, though that is the only consequential item software side that is. On the other hand, Marvelous might be gun shy about this one. The scuttlebutt is that this one flopped in Japan, selling way too few copies. How this thing could have failed is beyond me, though. Maybe this type of thing is old hat over there, but I cannot help but think that Uppers would do respectable business in the west. Just look at the popularity of crystal meth and other stimulants. If the relative unpopularity of the Vita is a concern, I’m certain that a quick and dirty home console port would do the trick. Please, Marvelous, and I am asking you personally: get this over here through whatever means possible. Otherwise, I will be asking about this every chance I get. Because it is now my life’s work.