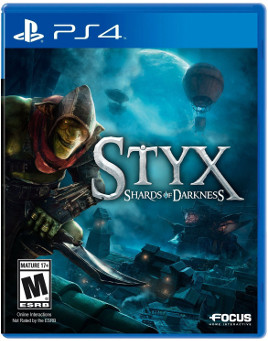 Goblins. Goblins are loathsome, vile creatures, and often have goofy names like Coy and tend to get sick when they mix oyster crackers with alcohol. Typically in the hierarchy of demihuman monsters, they tend to be toward the bottom and are basically annoying cannon fodder and are only troublesome in large numbers. Titular character Styx is not a fan of this stereotype, as he considers himself smarter than the average goblin and much better in a fight, able to infiltrate heavily guarded areas and exterminate armored humans single handedly.

Goblins are typically represented as rather brainless vermin in the fantasy world, and that viewpoint is common racial profiling for goblins in this world as well. Styx doesn’t exactly fit that profile, he is a sarcastic smart mouthed nimble goblin. The word may not appear at any point in Styx: Shards of Darkness, but Styx is basically a ninja goblin who can scale vertical surfaces and deliver death from the shadows so efficiently that this game could be called Assassin’s Green but that would be opening the door to lawsuits from Ubisoft in addition to just being an absolutely terrible title. More accurately, Styx is a ninja goblin who mastered all the stealth components of being a ninja but slept through all the combat training. Styx is pretty good at killing someone from the shadows, but in a toe to toe face off he is quite useless, a good analogy would be having a typical eight year old kid trying to fight Amanda Nunes. Charging into battle as if Styx is a champion knife fighter will not end well for the player, but this shouldn’t be a huge surprise since this is a stealth game and not a beat ’em up. After all, Styx is maybe four feet tall and has a very  lithe build.

While Styx is about as combat ready as Steve Rogers was prior to the Super Soldier project, his small goblin body allows him to excel in other areas. As long as he is able to remain hidden, he can travel through any heavily guarded area and can be quite deadly if he can get the jump on someone. Styx can scale walls and move around ledges, and is able to hide himself in some rather small locations. 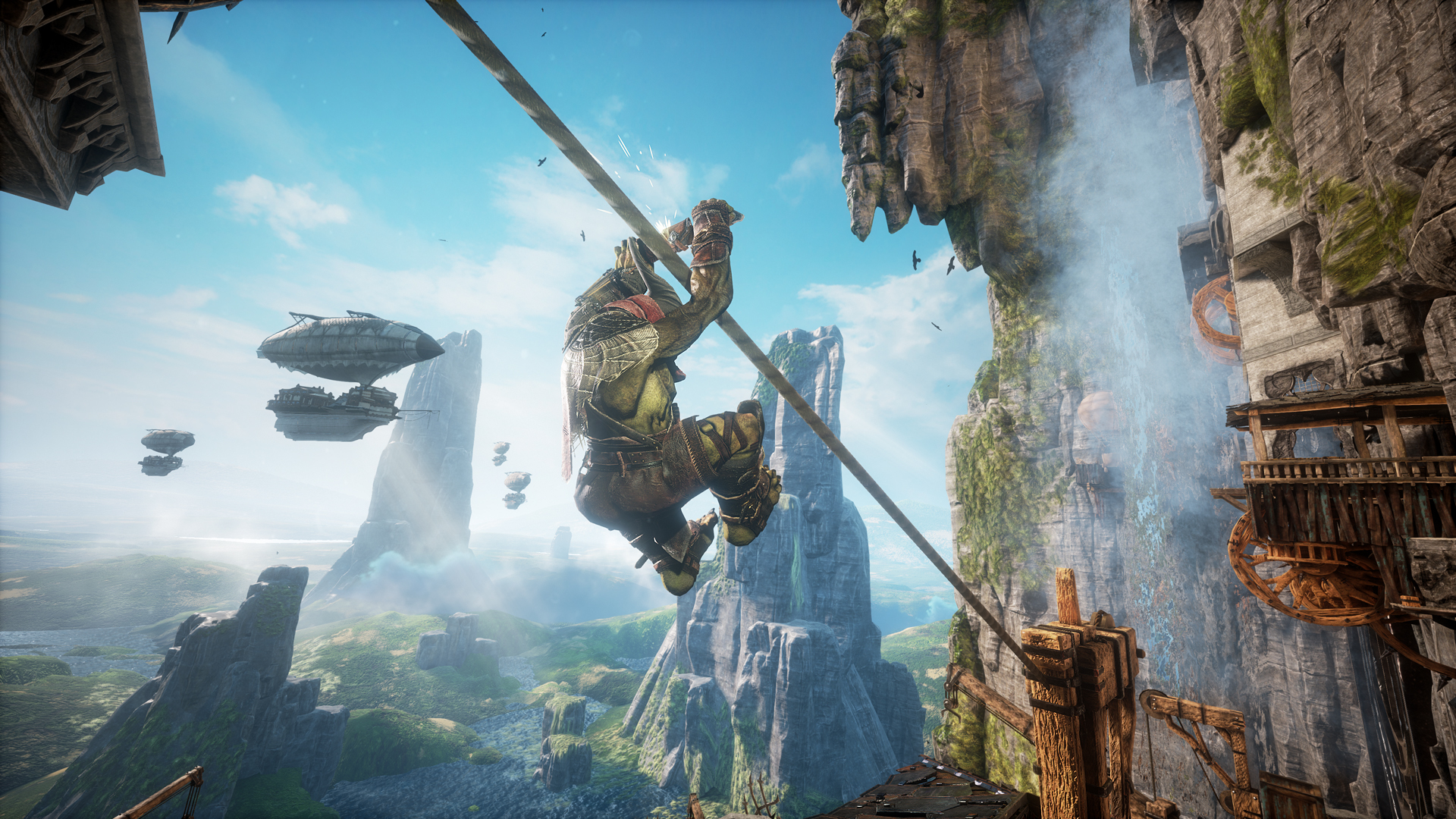 Sneaking behind someone and jamming his knife in their neck is a good go to for killing an enemy, but his bag of tricks extends beyond that. Poisoning food and drink is an option, not the same level of satisfaction one gets from a more direct approach but an ideal choice in some situations. Being able to turn himself temporarily invisible is a great way to avoid detection, and being able to conjure up a clone to distract a guard is also a useful trick. Human eyes aren’t that great in the dark, so extinguishing torches is never a bad idea, especially since Styx’s amber vision seems to be unhindered by darkness.

After pulling off a heist of stealing some guards’ payroll in Thoben, the City of Thieves, Styx is approached by Captain Helledryn of C.A.R.N.A.G.E, which is a squad that is not known for being on particularly friendly terms with goblins. However, greed can make allies of even the most ideologically opposed individuals and her promise of copious amounts of amber to swipe an ambassador’s staff was too good of an offer to refuse. This grants Styx the task of trying to figure out how to get on an airship to steal the item in question, which ends up drawing the attention of many goblin hating people and takes Styx to many exotic locations as he travels to Korrangar, the City of Dark Elves, which include mysterious mines and impenetrable fortresses. 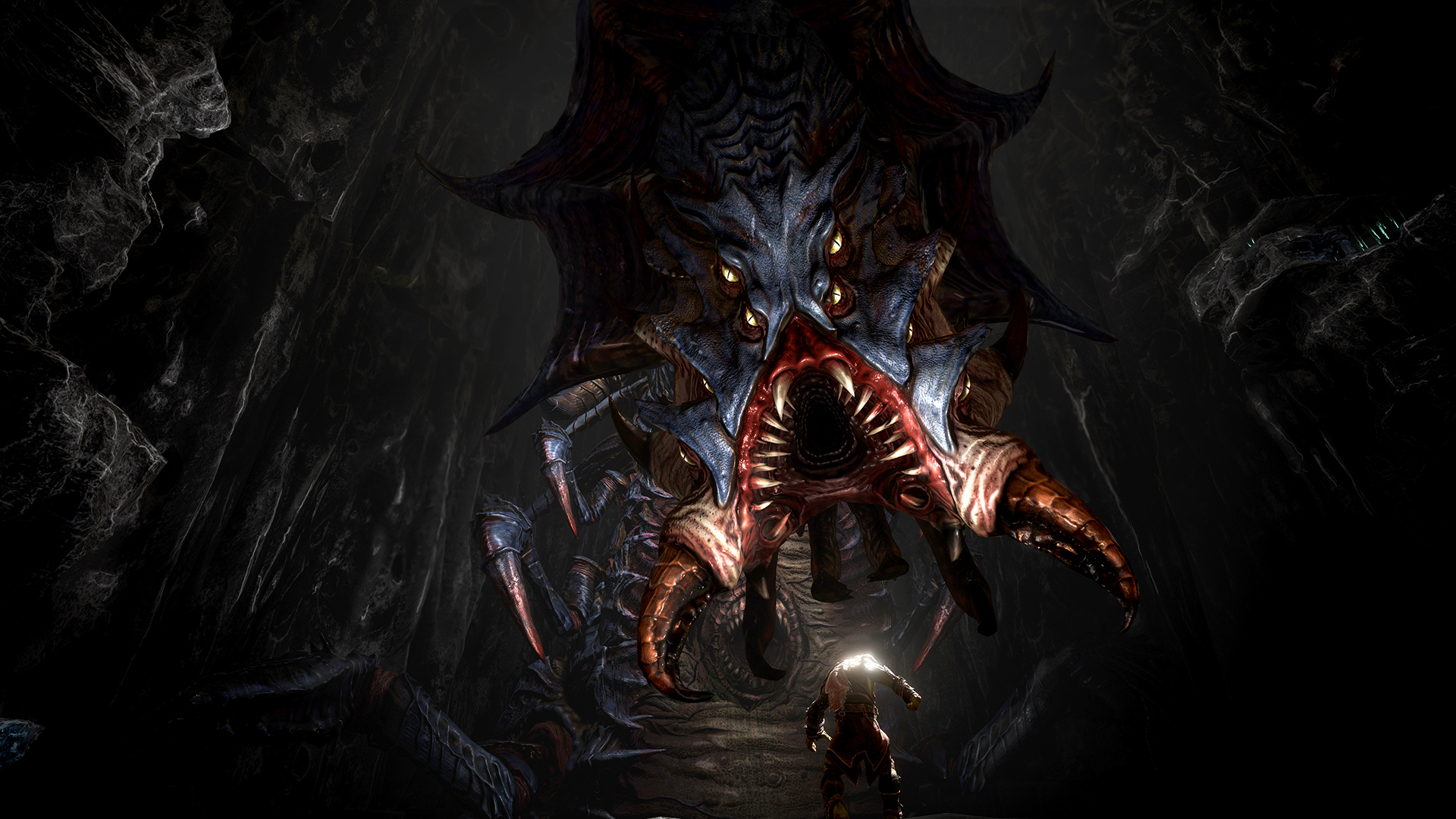 Controlling the wise cracking Styx is quite enjoyable. Avoiding battle, whether it be through stealth, distraction, or death by say dropping a chandelier on an unsuspecting person, is pretty intuitive to control and does in a more realistic fashion than simply moving through the room under a cardboard box. Slowly and quietly sneaking around all the time can become tedious, but this is broken up by jumping up walls, running around rooftops, and using his knife as an aid to zipline. It’s also useful to pick up the corpse of the people Styx recently killed and drop them down to a much lower location, such as off a cliff into a large body of water.

Styx is an enjoyable critter to control, and on the occasion when he does end up on the wrong side of the sword he taunts the player in the death screen. It’s similar to what the villains in the Arkham games do after taking down Batman, but instead this is Styx criticizing the player, suggesting that he won’t tell if the difficultly level is lowered or perhaps they should swap places so the player can painfully die while Styx works the controller. Being able to drop in on the fly for a co op session is gaining popularity, and this is a feature included in Styx: Shards of Darkness. Every level can be played cooperatively, which allows the opportunity for greater strategy and doubles the chances of success but also doubles the risk of being spotted, so communicating with the partner is probably a wise suggestion. 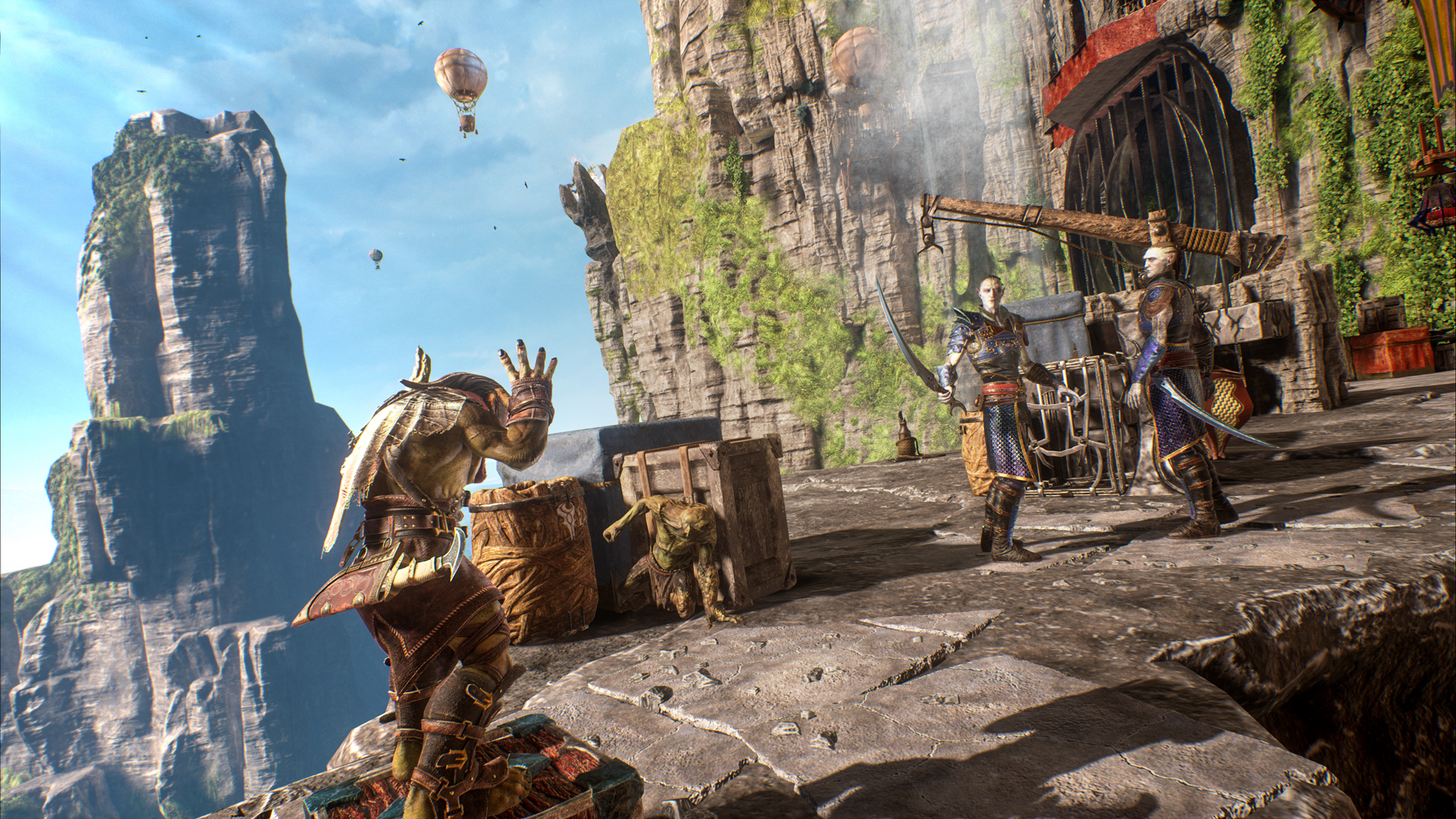 Styx’s abilities can be customized to best suit an individual’s play style. There are five branching skill trees that include Stealth, Killing, Cloning, Alchemy, and Perception. Just like there are many paths to completing each of Styx’s objectives, there are many different techniques that can be specialized. Having an expendable clone that can be controlled for a distraction is a unique way to keep the attention of the enemies away from him, or the player could choose to specialize in crafting lockpicks and traps. Causing trouble while invisible is something that always has potential for amusement, or putting points into the kill tree can make disposing of a dead body a much more time efficient activity.

Styx: Shards of Darkness has very high production values that show a noticeable improvement over Styx: Master of Shadows. The graphics are very detailed, even including the finer details of a roach’s underbelly during the opening cutscene. The world for Styx to explore is incredibly detailed and massive, with a lot of vertical traveling involved. The voice acting is well done, though the dialog is an appetizing mix of ham and corn. While far from Shakespearean, the vulgarities and sarcasm create a unique personality in our goblin hero and the dark humor is fitting to the overall tone of the game. 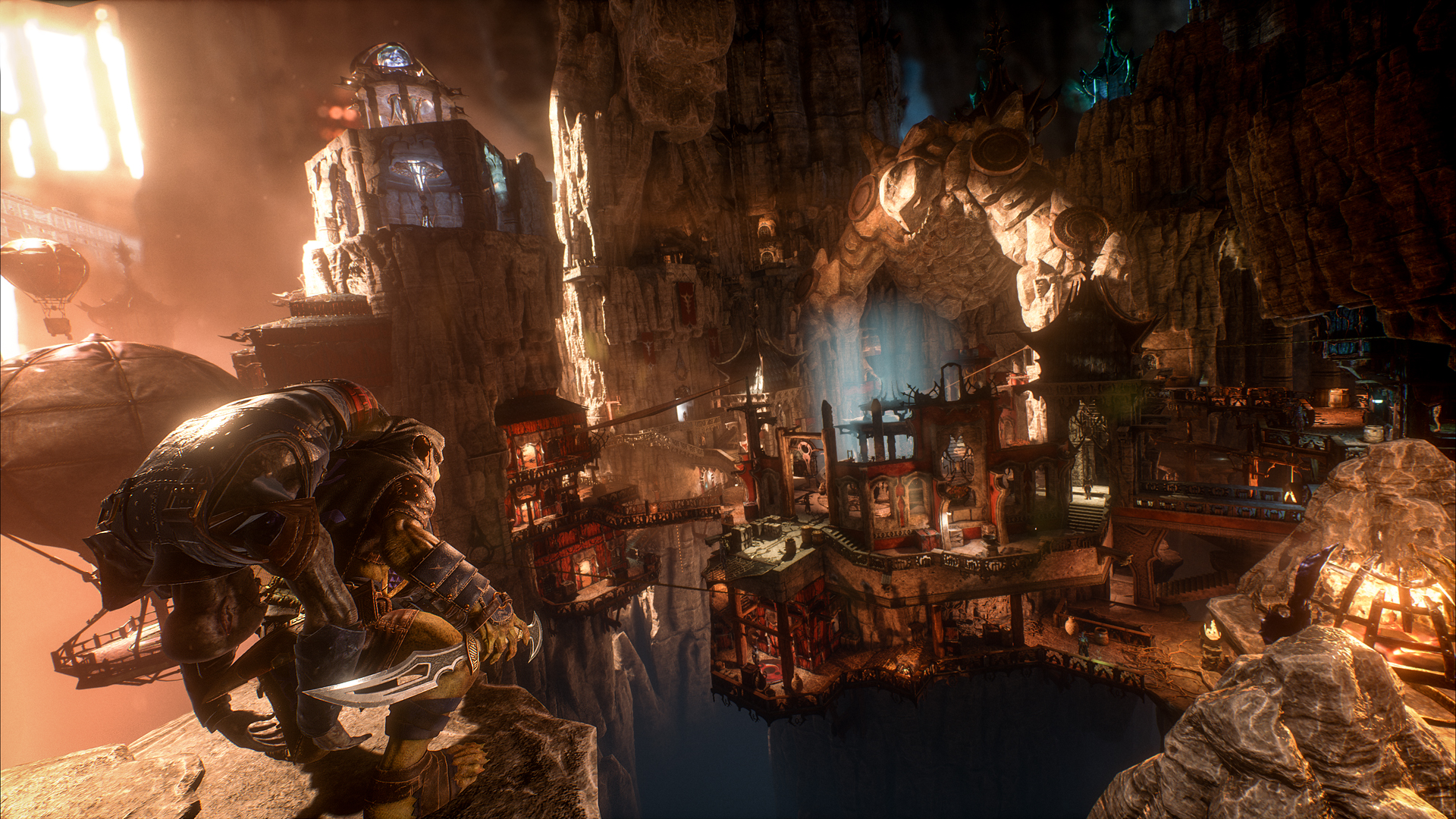 A wisecracking goblin assassin may seem like an odd choice for a protagonist, but the titular character of Styx: Shards of Darkness is enjoyable to control. The game mechanics are on par with some of the better known stealth titles out there, and taking place in a massive and beautiful fantasy world only enhances the experience. The typical stealth elements such as hiding in the shadows and hanging off building ledges mix well with the more unique abilities such as invisibility and having a clone run amok to take the focus off of Styx. The intriguing story and dry humor make this title quite entertaining provided some vulgarities aren’t a problem, but this is an M rated game after all. For a title that does not have household name status, Styx: Shards of Darkness is recommended to all fans of stealth games as Styx can hang with the likes of Ezio and Solid Snake.