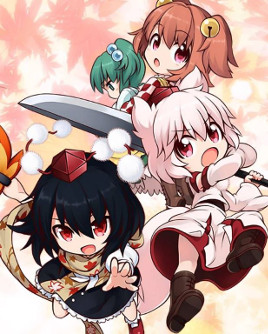 A frequent fantasy I had as a child was to be transported inside of what world was in the book I was reading at the time. Needless to say I was a dumb kid, since the majority of my reading fit into the fantasy or horror category and my sarcastic wit would have likely landed me inside of an irritated dragon’s belly, where I could cause irritable bowel syndrome (Editor’s note: you said you were a dumb kid, what exactly changed with adulthood?).  This idea of a misguided fantasy hell is the reality in Touhou Double Focus after Aya Shameimaru and Momiji Inubashiri find themselves sucked into a magical book.

Touhou Double Focus feels little bit like if Chip n’ Dale Rescue Rangers was made now if it was about newspaper reporting tengu who ended up in a book world instead of anthropomorphic chipmunks. There are some tasks that seem like they would be a little dark for a Disney Afternoon cartoon, such as returning a talking severed head to its discarded and disheveled body. This particular side quest resulted in a head scratching moment where the characters were scared of a decapitated body but had no problem transporting a dismembered talking head back to said body, but I suppose that served its purpose as a device to make the character search for an item and return to a previously inaccessible area.

Touhou Double Focus is a Metroidvania, so naturally stumbling into dead ends that require the player to return to later after acquiring a new ability of item is going to happen a few times during the course of the game. These can be found through the traditional means of defeating a boss character or in some more off the wall fashion, like the aforementioned disembodied head companion. The tone of Touhou Double Focus is fairly light hearted, so reuniting the head with body or finding someone trapped in the desert sands with dessert in hand are both humorous events. 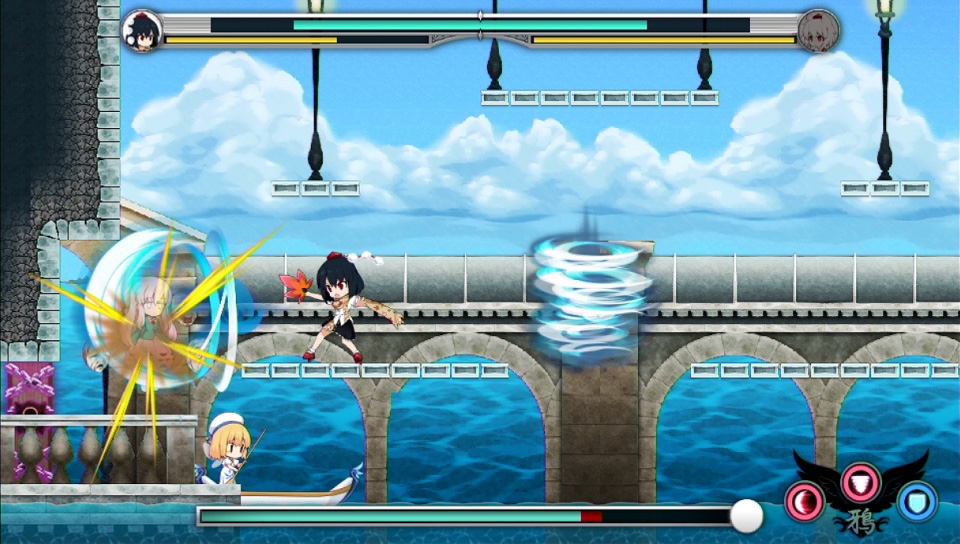 The player will control both Aya and Momiji, switching between the two as the situation dictates. Most of the time choosing who to play is a matter of personal preference, but each of them have some unique traits that require one over the other in specific settings. Aya has a skill set based on the crow and her newspaper day job. Her attacks are ranged and she is capable of attempting to fly, though not very well. It’s more like a strained hover if the thumbstick is moved up and she’ll flap her wings. It’s not true flight but she makes a good college try. Some of her special attacks include a camera with a flashbulb that is apparently fatal and throwing newspapers. Don’t laugh, newspapers can be effective instruments of destruction.

Momiji’s skill set is based on the fox, which grants her the odd ability of running up walls. I’ve never actually seen a fox do this, but gecko doesn’t seem like it would be a popular choice for spirit animals. Running up walls, despite it being necessary to reach some areas, is actually a fun power to mess around with. Momiju is a melee fighter, and her acquired special attacks tend to be along the lines of finding a new way to hit things harder. Aside from their fighting and flighting styles, their defensive techniques differ. Momiji braces herself for impact with her shield to withstand an attack while Aya does a backwards slide to get out of the way. 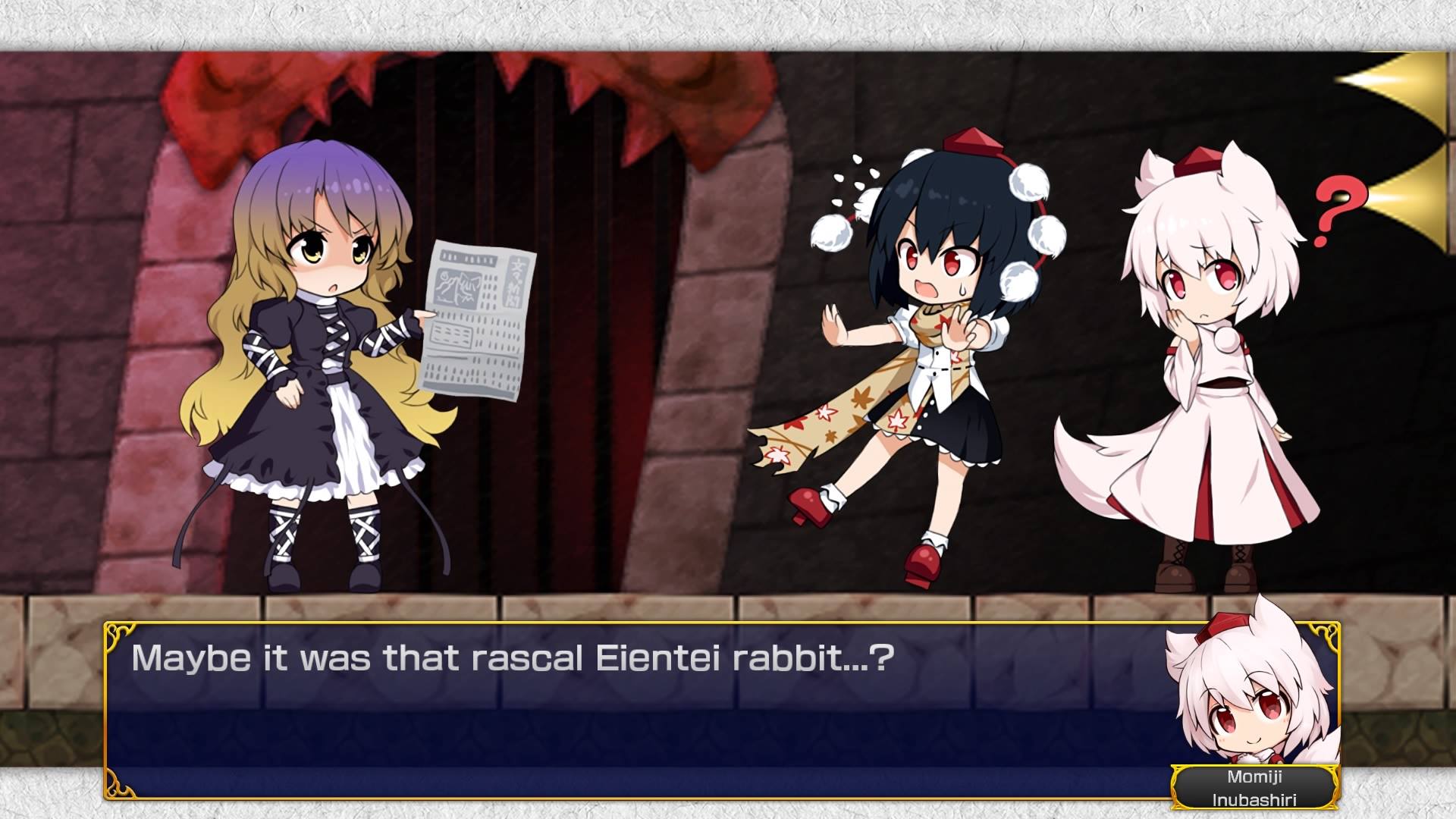 The world inside the magic book is divided into different large areas that have a theme, such as a water city or desert. Each area is pretty large, though as far as Metroidvanias are concerned this is one of the smaller ones. But this is one of those cases where size doesn’t matter applies for a few reasons. The story and setting is cute and makes the game humorous and enjoyable but doesn’t drag on for too long. As much as I enjoy some ridiculously long games, having something that can be knocked out in a few hours (if I was actually good at the game) is pretty nice. There are three difficulty levels, and even on easy a certain level of skill is required. There is a time attack mode for speedrunners and at the base area the bosses can be fought again for fun. The game throws the gauntlet at trophy completion freaks with some challenges I am too chicken to try.

Touhou Double Focus can be a fairly brutal game. There is one save point at the base and no checkpoints in any of the areas, and death at any time will send the player back to their last save with any map or item collection progress lost. Curative spells are pretty plentiful so that does help take some of the danger out of the equation, but we all know the frustration of spending 20 minutes clearing an area only to touch a red spike of instant death and having to do it all over again. This is another area where the shorter length of the game works to its advantage, since most progress can be regained post mortum in a rather short amount of time. This may be a personal preference, but the controls felt smoother using the D-pad instead of the analog stick. 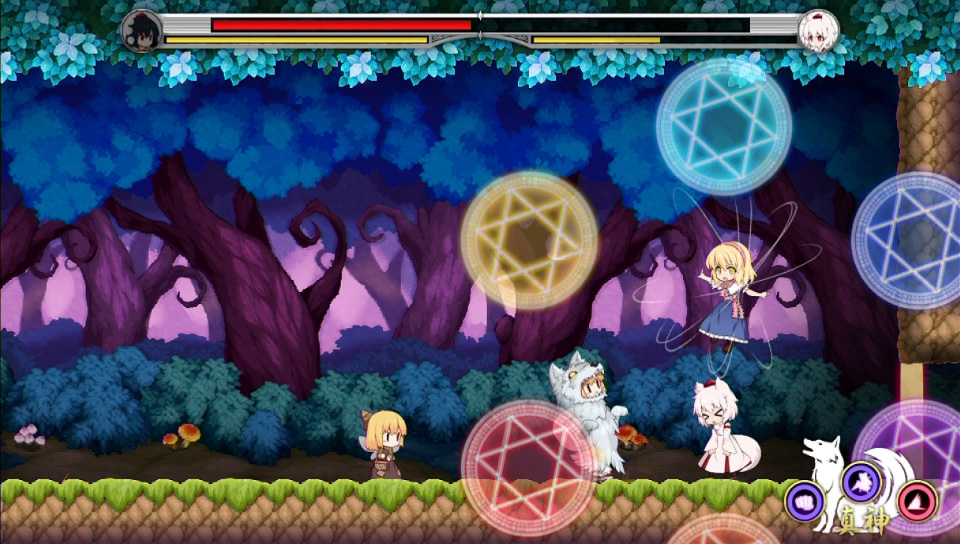 Touhou Double Focus is a quirky Metroidvania that offers fun and challenging gameplay. This isn’t the first game that requires the player to switch between two different play styles, but the simplicity in doing so does enhance the exploration aspect of the beautifully designed areas of the book world. While not incredibly long, this doesn’t feel incomplete since each area is filled with many nooks and crannies to explore with secrets to find. Time attack and replaying boss fights adds to the replay value and certain trophies need to only be attempted by the most masochistic of gamers. It should be noted that all physical copies of Touhou Genso Wanderer will include a copy of Touhou Double Focus, which we’ve reviewed separately.