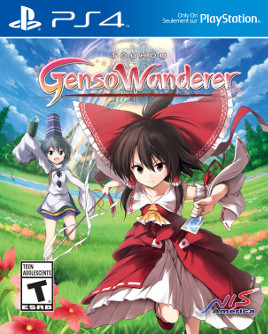 It seems to be a rather common occurrence in video games that when someone has a prized possession that they want to show off the sin of pride leads to very bad things happening. Such is the case for poor Reimu Hakurei, the Hakurei Shrine Maiden. She is visiting Rinnosuke Morichika at his shop, Kourindo, and he shows her his precious possession, the golden sphere. Rinnosuke is doing this as a see with your eyes, not with your hands type of thing, but Reimu just has to touch that golden sphere, and won’t take no for an answer. There are plenty of films out there that feature a similar set up to this, but Touhou Genso Wanderer takes things in a different direction.

After Reimu touches the sphere a golden beam of light is emitted, and Rinnosuke’s personality becomes very different. Judging by his newly hostile and violent nature and telltale glowing red eyes, it is not an unreasonable leap of faith to suggest there might be some demonic possession going on here. After Rinnosuke promptly trounces Reimu and disappears, Kourindo is gone and a mysterious giant tower has appeared in its place. As if that giant tower wasn’t troubling enough, the citizens of Gensokyo have been replaced by malevolent clones that attack Reimu on site. This might not seem out of place in some neighborhoods I’ve been to, but the fine citizens of Gensokyo are normally a peaceful lot.

And thus begins the tutorial level, where the player learns how to navigate Reimu through this overhead roguelike RPG. One of the earlier things we learn about Reimu is that this girl likes to eat. In addition to her health meter, that does regenerate itself gradually over time, there is a tummy meter that  gradually drains over time. Reimu needs to eat food in order to keep this meter full and subsequently alive. Depriving Reimu of food will make her pass out, and back to the drawing board she goes. 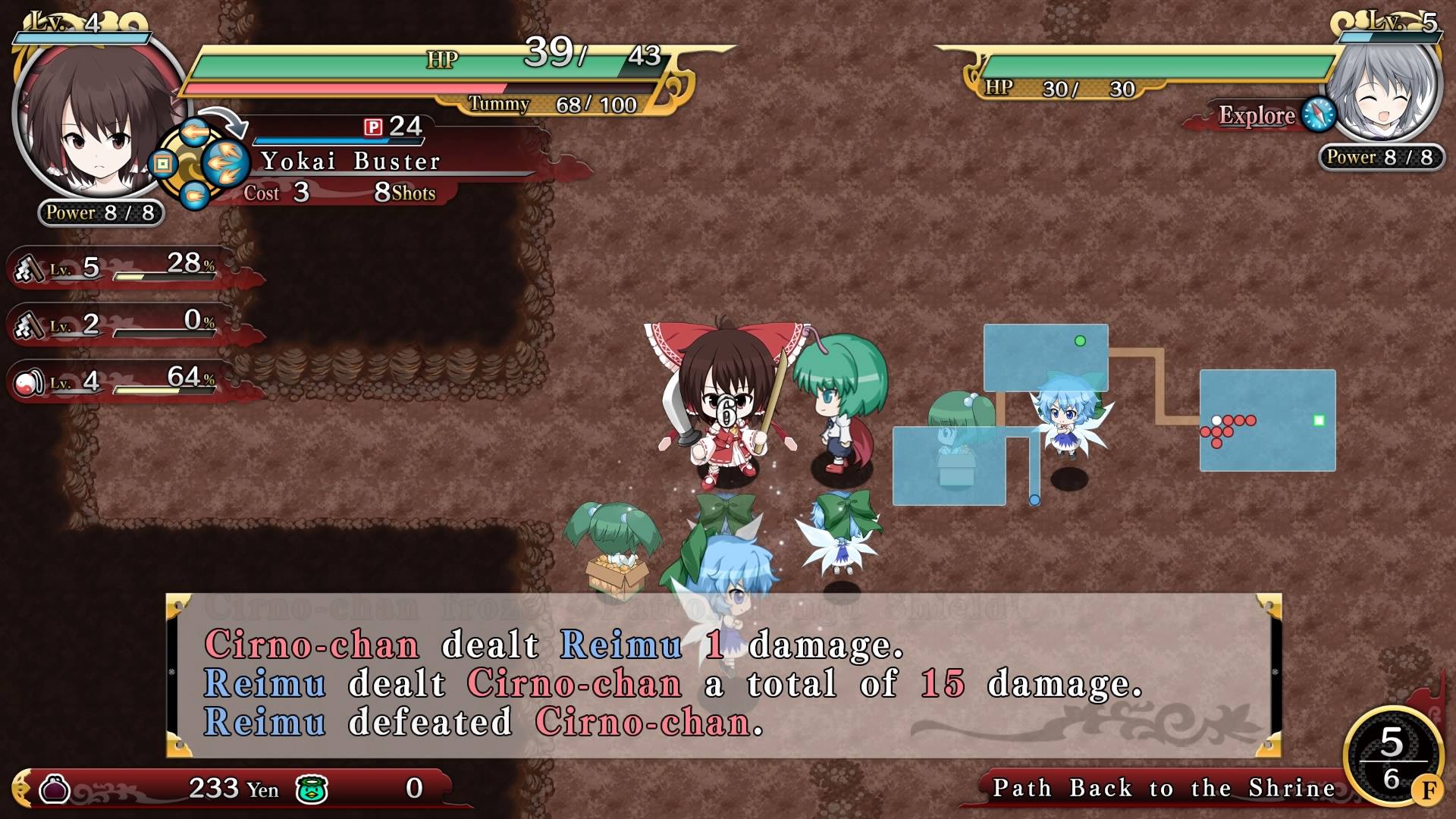 The play mechanics are very similar to Dragon Fin Soup, though I am pleased to say that Touhou Genso Wanderer is more enjoyable than that other title that was packed with unrealized potential. This is where all enemies and friendly NPCs pretend to be mannequins whenever the player is stationary, and everyone makes one move whenever the player moves.  This approach does seem like an attempt to merge turn based combat with real time action. Personally this is seen as a way to fail at both approaches simultaneously, but personal preferences aside this system is implemented well in this title. People who played Dragon Fin Soup and saw its potential and really wanted to like it should check out Touhou Genso Wanderer, as it plays how Dragon Fin Soup should have.

Early on Reimu encounters a sage named Futo Mononobe. Futo is a rather odd personality, but she is useful in assisting Reimu in her ascent up the tower that occupies what used to be Kourindo. She has a mind of her own, but like a good NPC companion will follow the instructions given to her by the player. It also helps to remember to equip this freeloading companion with proper equipment, as her usefulness becomes less apparent with her propensity to wander off unsupervised and get killed. 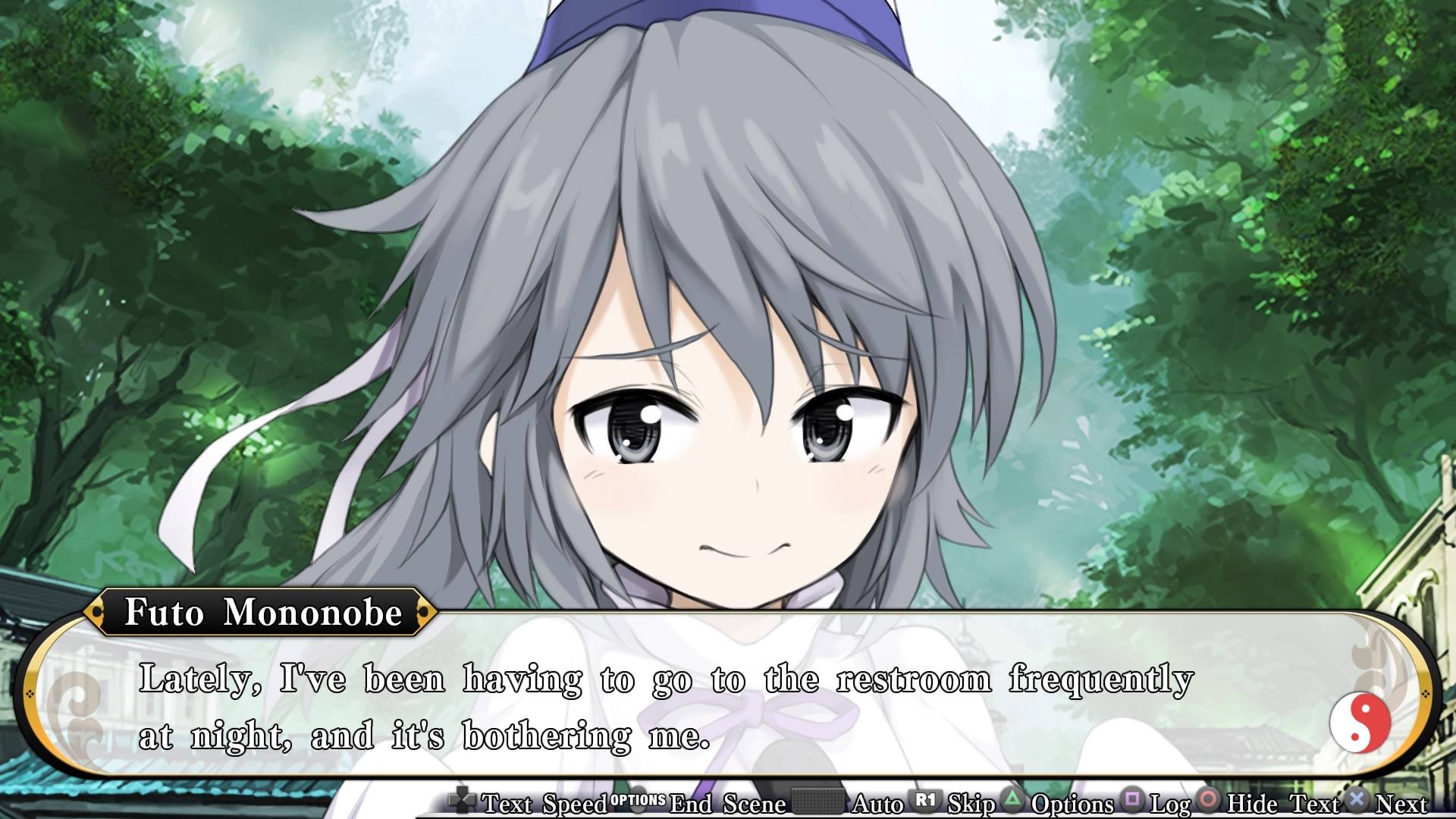 Touhou Genso Wanderer doesn’t deviate too much from the typical roguelike format that has become familiar over the past few years. Reimu must climb through this tower, collecting assorted loot and killing the hostile clones as she attempts to navigate through the labyrinthine dungeons of the tower.  When she dies she will lose all money and experience levels and begin back at the bottom, and like most roguelikes this will likely be a regular occurrence. She will retain all items and whatever experience levels the items have earned will also be maintained, so she may be back to level one but that level 23 sword in her hand will make short work out of those that get in her way. There are villages where the player can recharge and sell off excess equipment, as well make dubious business decisions such as investing in a kappa run item fusion business. Weapon and item fusing is nothing new but it does add that fun unofficial minigame of trying to concoct the most ridiculously overpowered equipment.

There is a surprisingly large amount of dialog within Touhou Genso Wanderer. Just about every new character that is encountered has a long drawn out introduction speech, even characters as the simple innkeeper who the player will typically only want to talk to when exchanged currency for healing. While this is a good device to fill in plot details or make the characters feel more alive, listening to a dissertation about the rather obvious function of a shop in every initial entry can overstay its welcome when one simply wants to progress further in the game. 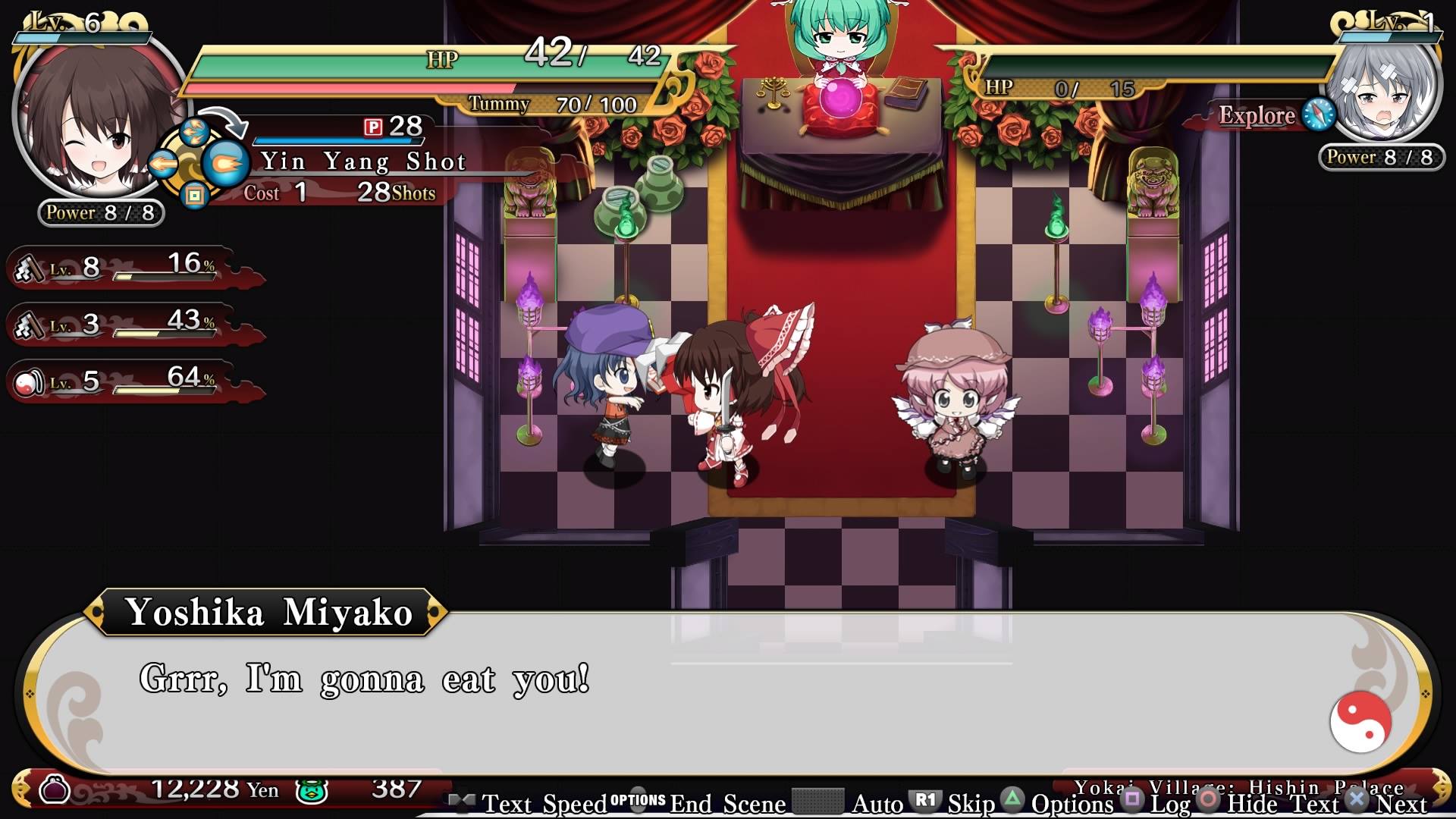 Touhou Genso Wanderer is a worthy addition to any roguelike fan’s collection, and even more so for Touhou fans as there are references to their other games throughout this one. The everyone takes one turn at a time system might not be for everyone, for this title is one of the better implementations of this format. Some of the cutscenes do seem a bit lengthy relative to the game, but they are at least entertaining and do provide a lot of information about what is going on in the game. Like most roguelikes, the challenge is set to kill the player on a regular basis but the system of leveling up equipment allows better odds for success with each respawn. The score given to Touhou Genso Wanderer is based solely on its own merits, but it should be noted that all physical copies will include Touhou Double Focus, which does make an excellent compliment to this title.