Pepper is a pirate with a problem.  Her ship was destroyed by a clumsy cyclops and its treasure scattered across the island, but thankfully her trusty drill Grinder landed nearby.  This turns calamity into mere inconvenience, because armed with her drill there isn’t much that’s getting in Pepper’s way.  The Grinder allows Pepper to drill through the earth like a fish through water, and while her turning radius isn’t quite so agile it’s certainly enough to target buried gems and navigate twisty subterranean passages.

Pepper Grinder is a side-scrolling platformer that sounds like it might be similar to Drill Dozer but really isn’t.  Pepper’s drill lets her arc through the earth, dragging her behind it and bouncing off the stone boundaries of the level while the tunnel she’s created closes behind her.  When surfacing she flies into the air, and can either keep holding the drill button to dive back down like a dolphin breaching the sea, or let go to land and go back to plain old walking again.  There are only two enemies in the single-level demo that was on the show floor, but they needed different approaches with the drill to take out.  The red bugs are only vulnerable from the bottom, while the green narwhal-critters drill through the earth as easily as you do and require jousting to take out. 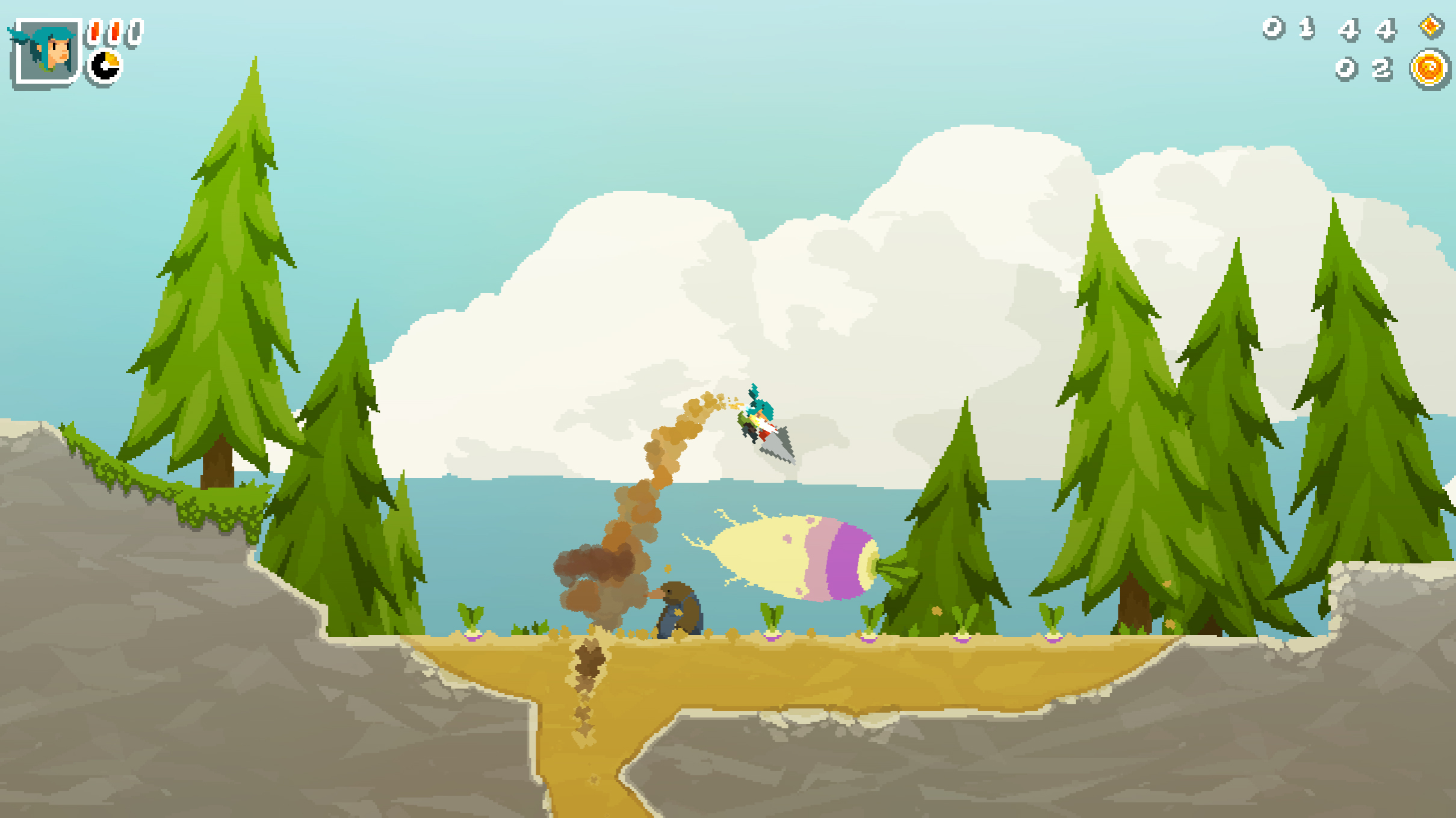 Fighting enemies with the drill is good fun, but Pepper Grinder is also a platformer, and you’ll need to learn the drill’s motions to make the most of it.  Pepper has a good amount of momentum coming out of the earth and this is used in most places to link sections together.  The drill also pulls Pepper along even when activated in the air, so a jump/drill movement is a simple way to get to otherwise-inaccessible areas.  The five hidden tokens in the level required using the drill’s abilities in clever ways to access.  My favorite of the lot required priming a hidden drill-powered cannon, which then shoots Pepper through the sky to an airship, but others require the jump/drill move, or racing a gate that opens by a drill-driven mechanism on the other side of the area.  The Pepper Grinder demo was only one level long, and the introductory level to boot, but it had more than enough clever gameplay bits and cute background details to make it one of the more pleasant surprises of the show.

Pepper Grinder is early enough that there’s no trailer for it, so here’s a Tweet showing the movement, plus a grappling move that wasn’t in the PAX East demo.

Taking advantage of that increased control over the drill jump.#PepperGrinderGame #gamedev #indiedev pic.twitter.com/dKbC1Evldj