A lot of the games we had played at PAX East this year were ones that we had played at PAX West last year but that didn’t get any proper previews, despite being some incredibly unique and promising titles that deserved all of the attention possible. And one in particular ended up being the highlight of the PAX Rising showcase this year, and that was TumbleSeed, from the team of AEIOWU. Describing itself as a “rolly roguelike,” the game immediately stands out thanks to the eye-popping and vibrant art from Greg Wohlwend, and oozes charm as you help a little seed climb a massive mountain to defeat a dark threat where avoiding cavernous holes in the ground, done via some unique and fun dual-stick gameplay where you raise each side of a bar to roll your seed back and forth at the right times.

Oh, and there’s the fact that it was inspired by another game entirely about beer.

Yes, in a discussion with one of the team members, it turns out one of the key inspirations for TumbleSeed was the 1983 Taito arcade game Ice Cold Beer, where players also used two joysticks to gradually raise a metal bar with a ball bearing on it, with the goal being to sink it into a lit hole while avoiding unlit ones, which represented bubbles in a mug of beer. Indeed, this is a game that directly has roots in classic arcade games, and odds are you didn’t even know about it (um, unless you read you read our last news article on the game). But it’s clear that the developers have a genuine love of this old arcade game, and it’s particularly clever how even a mechanical arcade machine one may dismiss as a sideshow attraction can be made into a potential classic with when some unique twists are applied.

For one, it’s highly unlikely that Ice Cold Beer let you swap between different kinds of balls at any time. In TumbleSeed, you can unlock different types of seeds by unlocking or purchasing them to swap between, with each one having different effects. One may be able to use crystal parts to generate much-needed hearts, but another may be able to arm itself with some spikes as well, in order to take out enemies. So of course, in order to reach the end of each level and ascend the mountain, you have to be able to properly manage when you should use which seed, lest you take a particularly notable fall down a hole to the bottom. 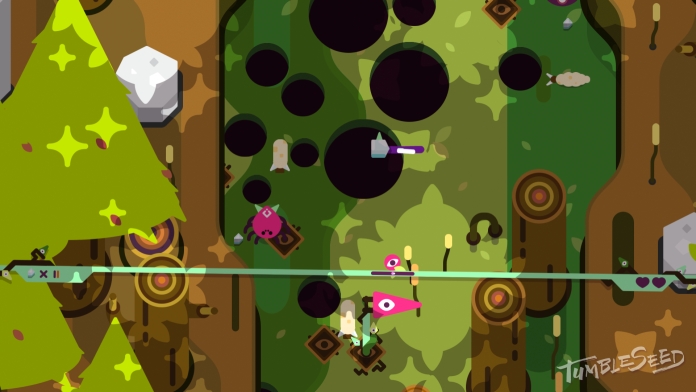 Fall you will, and yet you’ll come back again, and again, and again. I mentioned Greg Wohlwend earlier, and if that name sounds familiar, it’s because he also worked on Ridiculous Fishing and Threes!, which you might know as two ridiculously addictive mobile games. Unsurprisingly, TumbleSeed is in the same boat as those games in that area, with the randomized layouts always providing a new challenge to try and tackle. And much like its inspiration, it definitely has that quarter-munching feel and tough yet fair challenge common to the greats of the genre that definitely makes for lengthy play sessions, with the controls and general gameplay being simple to learn yet tricky to master, in the best way possible.

It also helps that, again, the visuals are astonishing, with the lineless style and bursts of candy-like color making for fantastical characters, enemies, and surreal, dream-like scenery that you will want to see more of each time. Not to mention the hints of a greater plot as well, complete with little base areas full of other seeds to talk with that allow for a bit of a deeper look into the mountain and its residents, as well as some moments of levity. A lot of detail and creativity has gone into crafting this game’s world, and it shows. 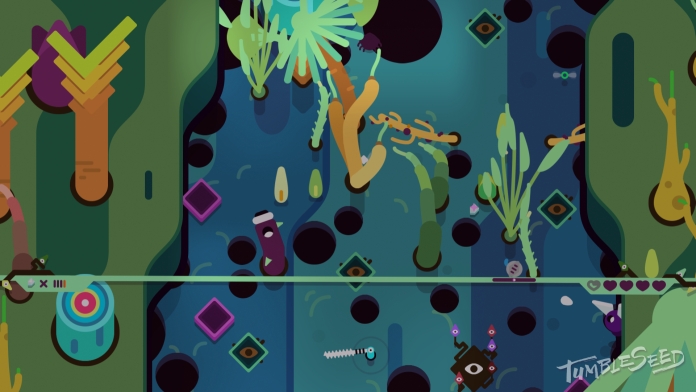 If there was one flaw with TumbleSeed’s showcase at PAX East, it’s that they weren’t showcasing the Switch version of the game, which will apparently have an exclusive two-player mode where each player controls one side of the bar with their Joy-Con controller. That honestly sounds hectic as all hell, but in a fun way, and I wish we had gotten to experience it. But regardless of platform, TumbleSeed has a huge chance at being one of this year’s biggest sleeper hits (if an oxymoron like that makes any sense), so make sure to check it out when it arrives on Switch, PS4, and PC later this year. After all, you can’t go wrong with a game birthed from a giant mug of beer, right?