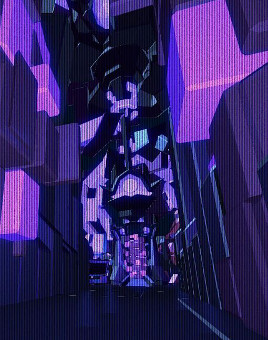 Desync is an engrossing tale of when Justin, Lance, Joey, Noctis, and JC traveled into a world that was very much like TRON. It was in this heavily neon colored retro future world where they had to take up arms against many hostile creatures that required more lethal force than the vocal harmonies constructed with the help of studio magic were able to deliver. Actually, let’s start over, since that is not an accurate description of what a player can expect from Desync, outside of the TRON inspired world, that part was true.

One thing that sticks out about Desync is how this particular game does not have a heavy emphasis on story telling. This is not necessarily a bad thing, some games are able to stand on the merits of their gameplay and don’t need no stinking  story. Even after spending some time with this game I couldn’t tell you what the story is about. The premise really is just wandering around a level, killing everything that tries to kill you until you are able to move on to the next level.

The philosophy of Desync  seems to be never stop shooting or moving, and does encourage creatively killing the enemies through the use of sidearms and traps in the virtual reality environment. This is most exciting on the early playthroughs because it seems that the enemies never deviate in their spawn points, so after an area kills you enough times it isn’t too difficult to predict what moves should be made. Whatever course of action doesn’t seem to change the fact that death is a regular occurrence, but at least one can brace themselves for impact.

The UI of Desync is unique that there isn’t a traditional area selection menu, instead the player has to navigate through the starting area and enter something I would presume is supposed to be some high tech computerized vestibule that transports the player to where all the action is. On one hand going for a less conventional and more immersion approach to level selection is a welcome variation, but the way it is presented here it isn’t exactly clear where the player is supposed to go at the start of the game, and actually wandering where I needed to go to get into the game happened entirely by accident. Once the player enters the arena, things become a little more straight forward since enemies appear pretty quickly and the player is receiving and inflicting fifty shades of neon pain and will soon experience the first of many deaths. 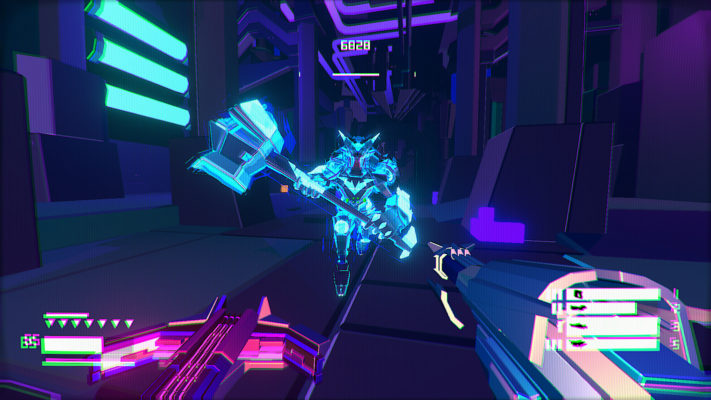 Just in case the over abundance of neon was preventing that from being crystal clear, Desync is an extremely challenging game and all but the most skilled players will die repeatedly. The problem is not with the challenge but with the lack of motivation to increase one’s skill level enough to complete the game. There have been many great tough as nails games such as Ninja Gaiden on the NES or Ninja Gaiden on the Xbox, but those games would repeatedly spank the player in a way where they looked forward to the punishment and felt a sense of accomplishment when they finally overcame it. Desync offers all the pain though the pay off isn’t really there.

The overall presentation of Desync screams the ’80s. The blocky neon design has a nice retro aesthetic and the pulsating synth heavy soundtrack pounds along nicely to the carnage. To make the retro look complete the game emulates CRT aliasing which wears out its welcome rather quickly. Adding fake scan lines and background static can be amusing in small doses if it makes sense, like if there was context for this to actually be a retro title instead of simply going for a TRON meets cyberpunk style. Desync carries the standard epilepsy warning but the simulated old TV effects can be unpleasant to even those who normally do not have issues with strobe lights. The soundtrack suffers from only having one track per level which can get monotonous considering how many times most players will die in a level, but that criticism aside the music is arguably the strongest part of this game. The soundtrack is available for purchase from the Steam store, and would be a fine addition to the collection of anyone who enjoys video game soundtracks.

Champions of the so called master PC race will rejoice as Desync only recognizes mouse and keyboard input as a means of control. Despite the presence of leaderboards, Desync is a completely single player game and the leaderboards are only there so players can compare scores and compete against each other that way. This actually is one of the nicer features since if someone were to actually get good at this game earning some bragging rights and actually have some old fashioned score competition is enjoyable. 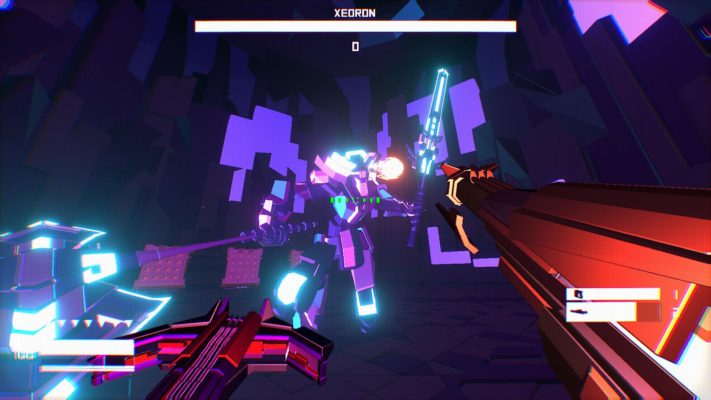 Desync is not the worst first person shooter I have ever played, but it just doesn’t bring anything to the table to make it that worthwhile either. It does a good job at recreating how the ’80s tried to create something that looked futuristic, but this stylized homage to that decade is definitely style over substance. Normally I root for the underdog, and enjoy suggesting some lesser known games as alternatives to  AAA titles, provided that they are able to deliver just as memorable experience as their bigger budget brethren through the game play mechanics and/or story. In this instance, one would be better served by sticking to Doom or Titanfall 2. The absence of an engrossing story combined with repetitive gameplay fail to generate the motivation necessary to overcome the great difficulty level, making it difficult to recommend Desync to anyone who doesn’t eat and breathe first person shooters who may have some masochistic gaming tendencies.