There comes a time when you stumble across a concept — particularly one in a well-established genre, where only the minute changes or tweaks to the formula are given free reign on altering the formula — that just makes complete sense. By sense I mean logical given the natural flow of the game it’s deeply embedded in and clearly taken account of. And by complete, I of course mean “how has no one else thought of this yet?” GUTS, in another scenario, could so easily have been shooed away by veterans and indeed newbies of the fighting genre alike for its comically hyper-violent look and/or lack of an incentive to get invested beyond the genre-standard flair of controller input combos and 2.5D fighting arenas.

If you were to look at it from this very brute and cynical viewpoint, then perhaps yes, GUTS may well have been doomed to skirt the confines of PC game clients and broadened console release libraries as nothing more than another competitive fighting game created by but one more independent developer. But that is truly not the case, because for all its [at worst] generically bright-and-vibrant scene-setting and abundance of black comedy-tinged – but safely mild – detailing of gore, the saving grace lies in how GUTS so cleverly asks the question, albeit in a snarky, exaggerated tone: “how do we make fighting more violent and gruesome than what’s come before?” Because beating each other to a pulp – physical or non-physical acts of violence imbued – just isn’t enough, right? 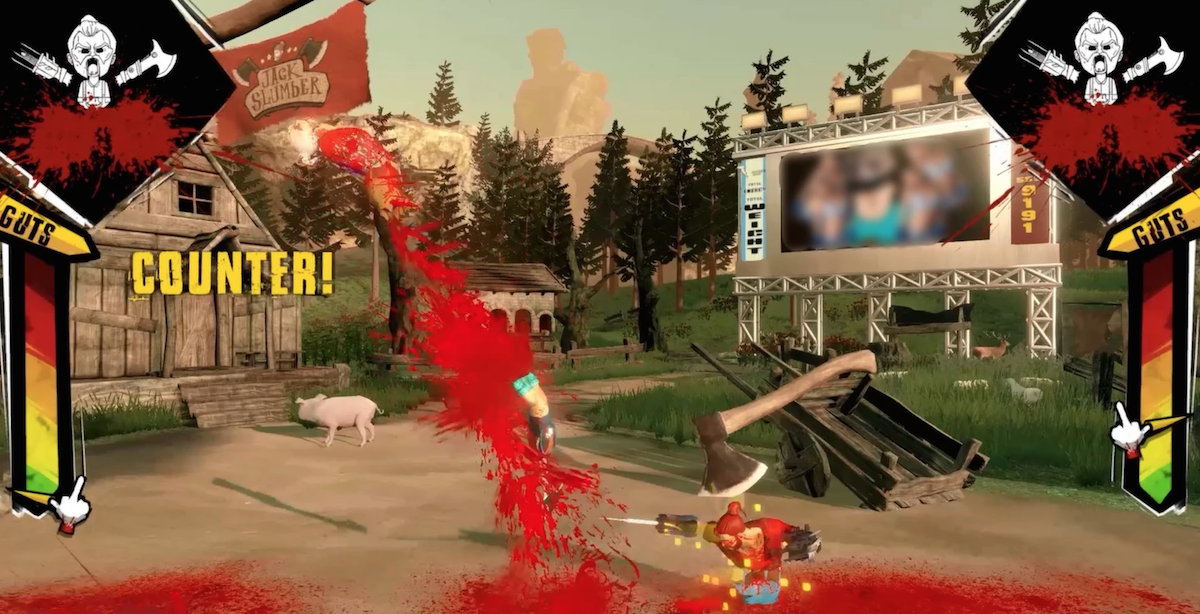 No… what better way to take this to the next level, then to have your player-character’s, quite literally, tear each other apart. Limb for literal limb; “an eye for an eye” redefined. But beyond perhaps the cel-shaded gruesomeness of having characters flail, hop and struggle with their newfound amputee status, there’s some promising tactical and strategic benefits to this line of tainted violence, most surprisingly. Sure the main objective within each of GUTS’ silly, archaic matches is to have your opponent virtually limbless in order to achieve victory, but like all good fighting matches, sometimes it’s the one with brains that outmatches those with the most obvious of brawn.

In order to chip away at your opponent’s limbs, GUTS features (as is standard now) a power meter by which can only be filled by regular physical attacks and combos alike. Once full, players can pull off — or at least attempt to pull off — what its characters so gallantly cry in decree as that of a “GUTS MOVE!!” which works by first targeting a limb before pulling the entire match briefly into slow-mo. Finishing off the set-piece with, hopefully, a precise strike that tops everything off with your opponent not just one limb down, but having to now adapt to the slight alteration in controls which adds a noticeably nuance touch to GUTS’ seemingly basic premise. While the shake-up in how combos and physical attacks are performed certainly keeps fights fresh and needing of a level of adaptation, it’s the way (even with the odds stacked against you) fights can make a limbless torso and head against a full-bodied champion perhaps…not so one-sided as it may visually seem. 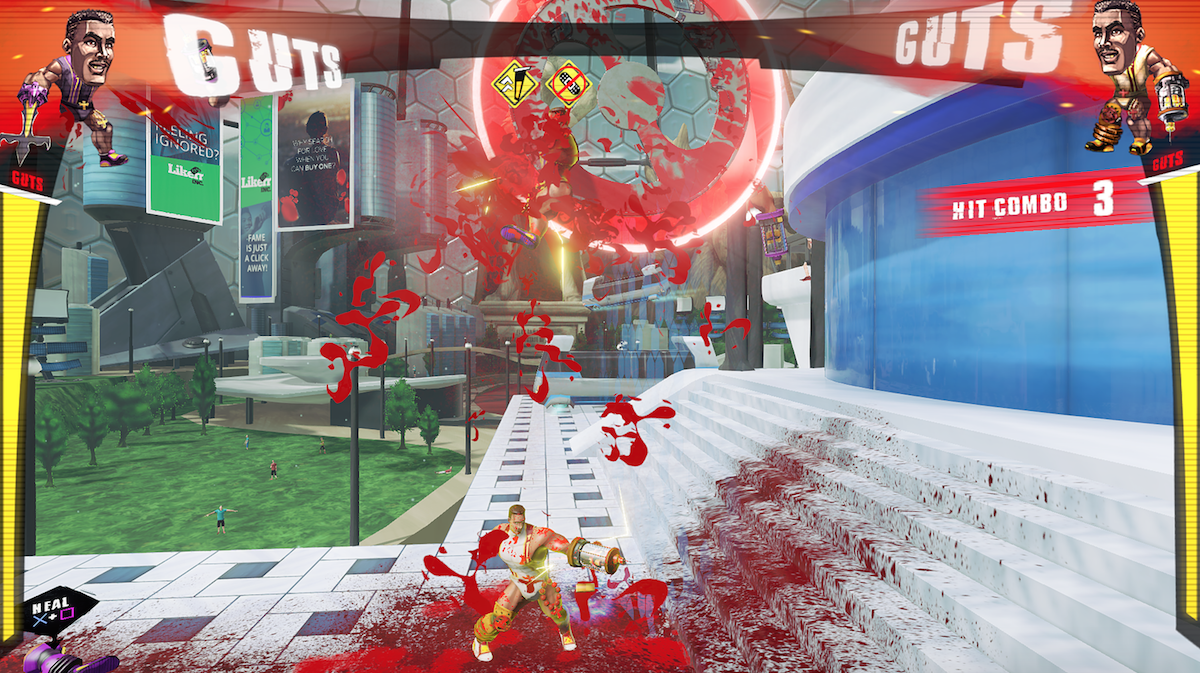 I’d be lying if I said, having played the game, a misgiving air of confidence would regretfully sweep over me, having restricted my opponent to perhaps only one arm…only to have the tables turned completely against me in the next moment. Deadly traps nestling by either side of the arena notwithstanding; GUTS’ most prominent appeal is the way its systems don’t simply discard the players who might not be having such a good time. Don’t be mistaken, this is still clearly a skill-based fighter — one that rewards those who think two, maybe three steps ahead rather than focusing solely on what’s before them.

But whether it’s during these slow-mo segments or not, even when the odds are stacked against you, GUTS always feels like it’s providing enough of a support without coming across like it’s suddenly turning bias for or against a particular method or means of playing the actual game. Naturally there’s some polish in the character models to be seen to, not to mention a second glance at just what particular aesthetic the team are trying to reach for in this rather questionably comical mash-up of Capcom slickness and something else more…dare I say…overblown in its tone. But what’s so obviously been proven here is that you don’t need to be a gargantuan of a studio — or from our end, look to the established licenses and grand names in this, the fighting genre for example — to find an entry aiming to be different but do it in a way that is both sensical and, crucially, entertaining to play. 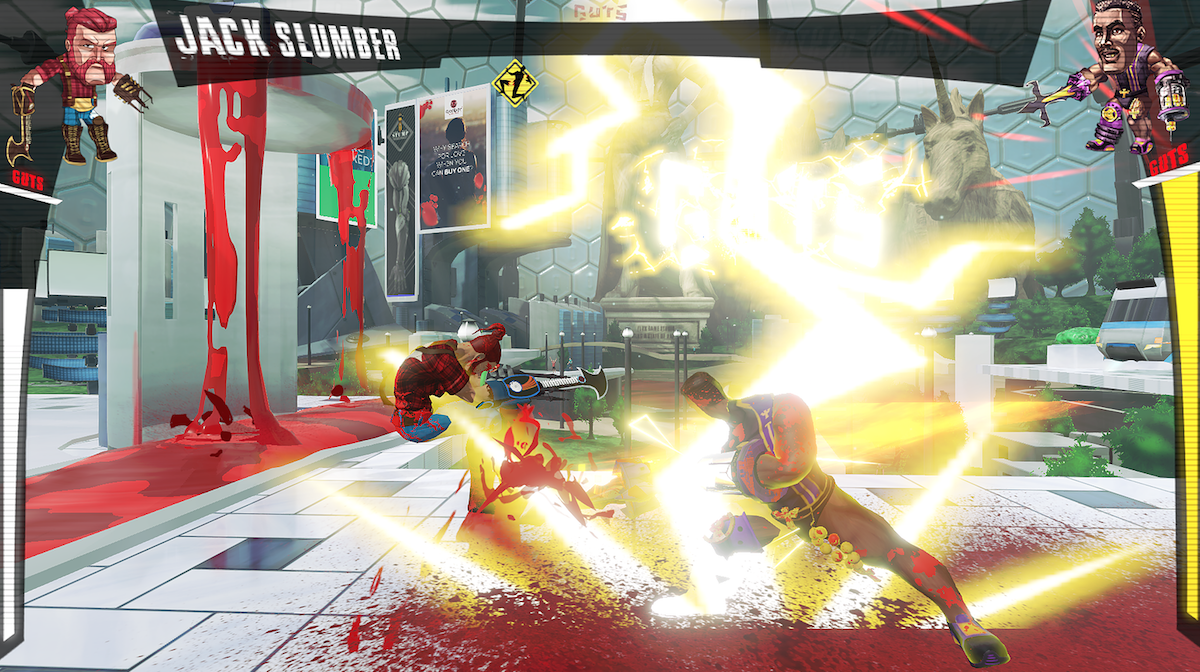 GUTS’ hacking-and-dicing mechanic may sound like an impoverished or otherwise immature system to focus on, yet it’s not until you see the wider picture — the strategies involved and the see-sawing unpredictability of each match — that you realize that visuals aside, what GUTS could (just could) represent is a very genuine and honest mindset that all fighters should aspire towards. That for all its pretension and would-be complexity, fighters should, above all else, be fun…for every one of the skill levels that comprise the wider community base. And GUTS, when it comes down to it, is an accessibly fun little thing to try.