The Sexy Brutale has been a rather interesting game that Cavalier Studios have come up with, taking inspiration from the likes of Groundhog Day and Majora’s Mask to create a time-warping mystery where you play as a preacher attempting to stop a murder at a masked ball in a mysterious casino and resort. It is indeed the type of game where its genius may be a bit hard to appreciate at an exposition where it’s on display, at least not without having to make the time for a lengthy play session. But still, what we have seen suggests what could be a unique and incredible game indeed, one with a paranormal mystery worth checking out. 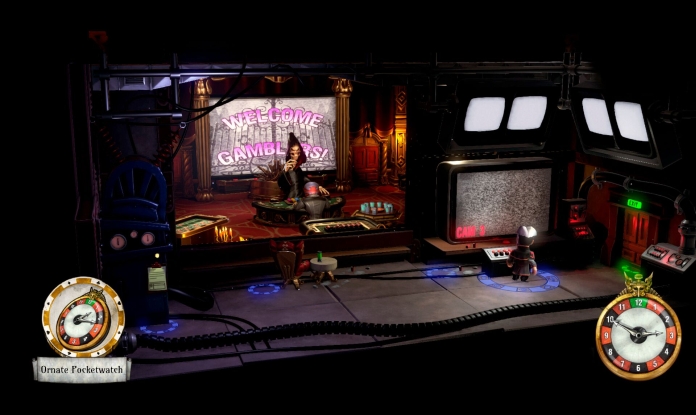 The introduction provides us with a simple enough mystery on its own: We see a mechanic get killed, we see him get killed with a particular gun, we restart the day and go remove the bullets from the gun. It’s simple enough, but that was just the introduction. Once the casino opens up more and we get multiple guests to decode the murders of, in this case a former head of security and their wife, a blind sculptor, things get a bit tricky. For one, we have to deduce where they may be moving around to. Clay – the former security head – may have decided to stick around playing cards, but his wife wandered off, and as being visible in the same room as someone else transforms their mask into a demonic entity that chases you, so tracking them is rather tricky at first.

This isn’t even counting all of the scenery you interact with, searching for any items or clues that could come into play later. In one go, you can find an old record with a certain tune or various playing cards tucked away, but not know what to do with them until later. You can try peeping through keyholes to look ahead or even spy on conversations as well, hoping to gain information needed. You can discover hidden locations with CCTV views, but you also need certain codes to access certain cameras. There is a ton to work with, and in the end, Clay died due to a seemingly poisoned drinking game, and I didn’t know where to begin. 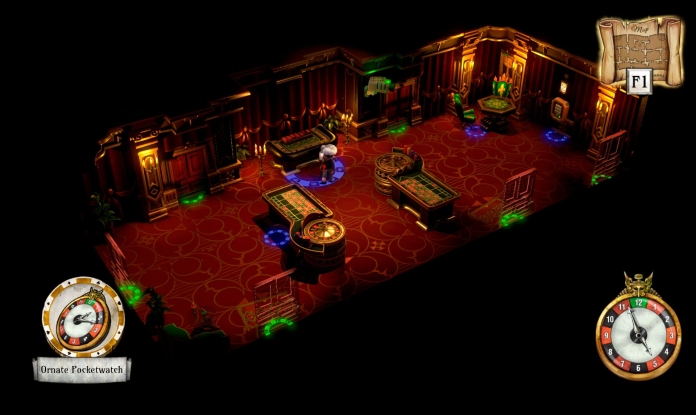 Mind you, none of this is a complaint. Pretty much the opposite, in fact! All of this suggests that even with the in-game menu helping you take notes, you’ll be relying on pen and paper a lot to keep track of all the clues you find, and that tends to be the sign of a particularly deep adventure game and mystery with a ton of puzzles to solve, which bodes well for The Sexy Brutale. Even the mystery in the introduction required a lot more exploration and the need to pay attention than you might expect from the part of the game that’s still acting as a tutorial. And adding in various powers such as time travel elements only makes things delightfully trickier, making sure to keep track of where everything was when you go back.

The Sexy Brutale is also a visual treat, especially with its unique focus on masquerade aesthetics. Speaking with Cavalier’s founder and Design Director Charles Griffiths, one of the heavy inspirations for the game was immersive theatre, as well as playing with the idea of the intrigue and glamour that masquerade balls provide, and the emphasis of masks allowing each character to have distinctive personalities on display. Hence why a lot of the graphics feel bold, colorful, and attractive, to match such a flamboyant theme, with a super-deformed style providing a bit of contrast. Throw in some jazzy music as well, and it creates quite the impressive piece of work.

The Sexy Brutale may require more time to soak in the best parts of it, but it definitely appears that this will be time well spent. The Sexy Brutale will be released on April 12 for PC, Xbox One, and PS4, with the latter version also getting a physical edition courtesy of BadLand Games. Regardless of which option you choose, an amazing and surreal mystery is waiting in the wings, one definitely worth checking out.