The aliens have finally arrived and all they care about is data. It’s hard to store all the stuff in the universe, as noted by the great human philosopher George Carlin, but managing its data is much simpler. If gathering all that information destroys the object then it’s a small price to pay, unless you live on a planet on the verge of being analyzed. Then it becomes a problem, and one that can only be solved by constructing the craziest, deadliest guns ever assembled. Mothergunship makes you the final defense against a robotic horde intent on cataloging Earth down to its last atom, and to save on data charges they’ve brought their full armada with them.

Mothergunship features the biggest, meanest, most heavily armed robo-data entry clerks in all their gun-porn glory, packing every ship’s levels with a dense bullet hell. Also making an appearance- lasers, saw-bots, missiles, bouncy pads, flamethrowers, and anything else that might turn a human ambassador for planetary survival into a filed, stamped, indexed, briefed, debriefed, and numbered bit of data in an alien library. The two modes on display were regular and nightmare, and while I was able to complete a run-through of the first (aided by an infinite respawn that won’t be in the final game), nightmare kicked my head in without breaking a sweat and left me hungry to try again. 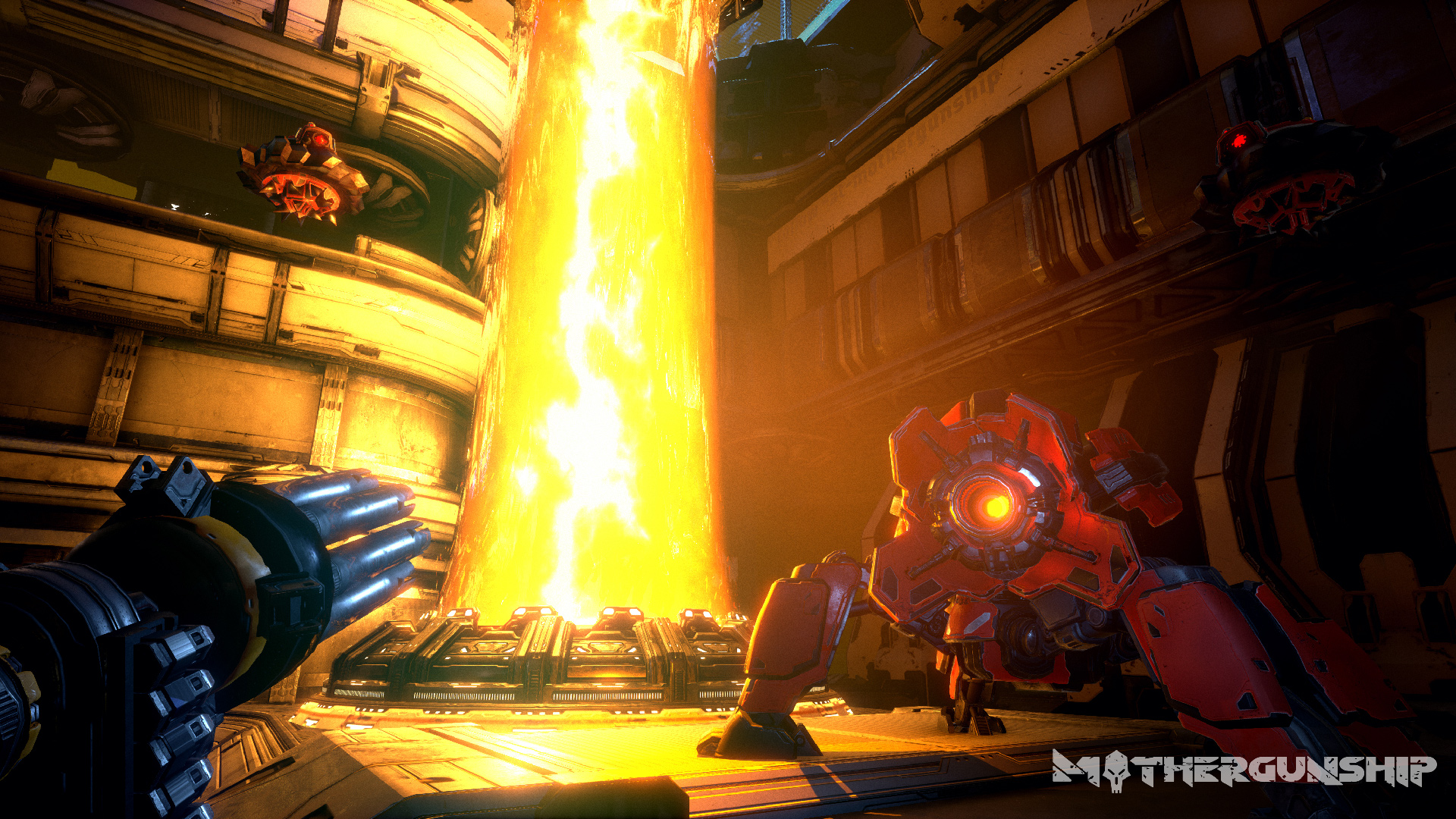 Getting a sense of how Mothergunship plays is no more complicated than firing up developer Joe Mirabello’s previous game. Tower of Guns is the template for Mothergunship, except instead of a giant semi-steampunk mechanical tower the action takes place in a dark but shiny sci-fi spaceship orbiting the Earth. ToG was originally conceived as a coffee break game, not taking too long to complete a run-through, but a full round from start to finish could easily take more than an hour. The level progression in Mothergunship is designed to be much shorter, and I beat the standard-mode ship in about 20 minutes or so.

Each run starts in a safe spot leading into the ship, which is divided up into a series of enemy-filled rooms. You can either explore every nook and cranny of each area, designed with secrets and a good amount of verticality to put the starting triple-jump through its paces, or blast and speed-run to the nearest exit. Some rooms have a single obvious way out while others have multiple exits, possibly hidden, and sometimes you’ll even find a sales terminal. 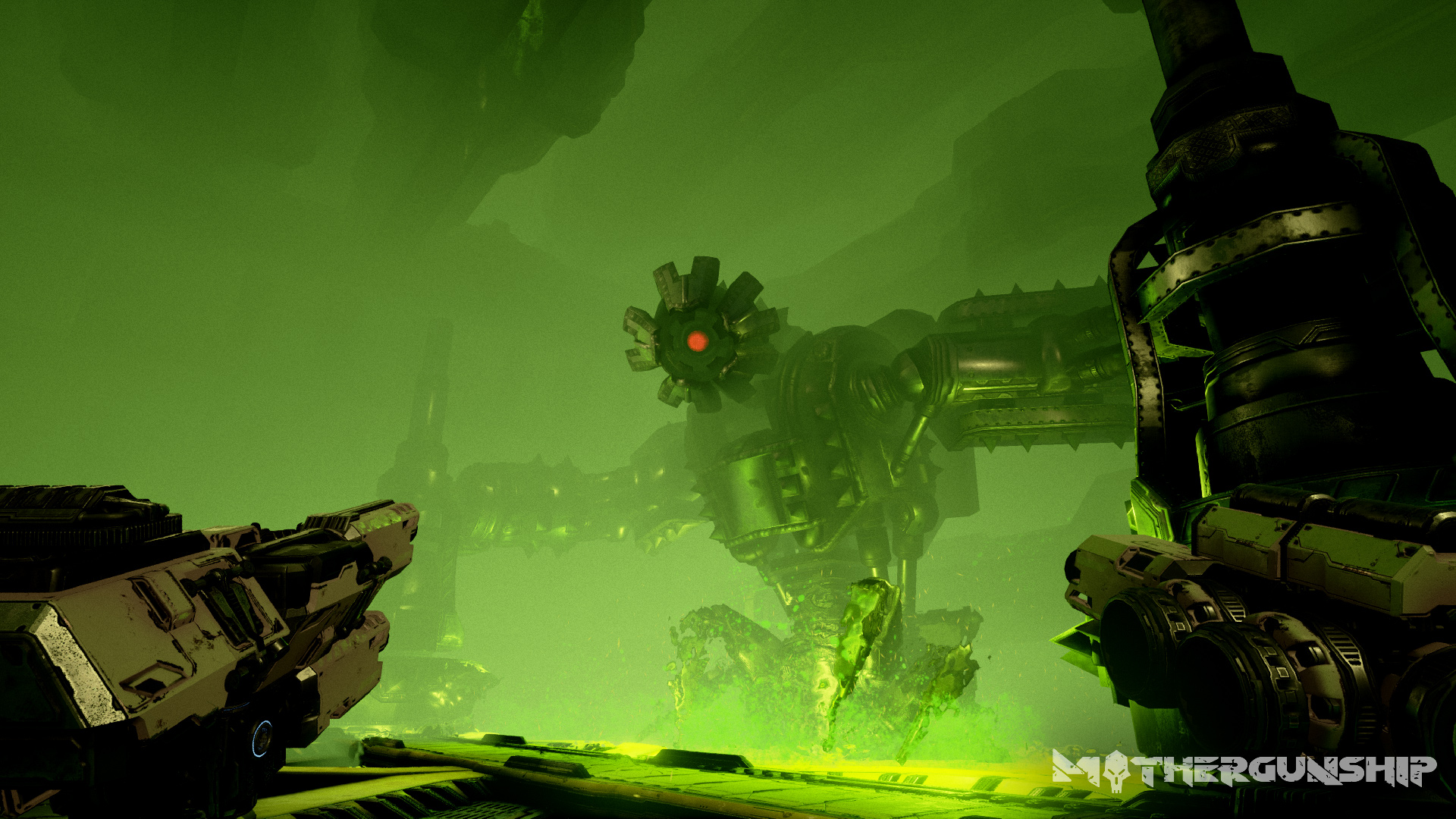 When enemies are shot they fly apart into a small shower of health, energy, and coins. The money is spent at weapons terminals found tucked away throughout the ship, and the aliens seem more than happy to sell you everything needed to defeat them. Your starting gun is modular, able to be expanded from a fairly effective popgun to epic dispenser of projectile fury. Gun barrels and connecters can be added any which way, with no limits on practicality so long as you can afford the parts and the barrels don’t overlap while facing forward. Want to shoot an energy ball, laser, and a pair of chainguns with a single button click? Buy, assemble, and mind the energy drain.

Every shot drains a blue gauge on the side of the screen, with the initial starting gun just barely ticking away at the ammo supply. Link a couple of items together, though, and each shot will take far more energy, and it’s easy to make a gun that can be fired maybe twice before you need to wait for it to regenerate. One of the enemy drops is power, but not to the point of refilling the entire gauge in a single pickup. A huge gun is awesome and fun to play with, but a good design balances energy usage with damage potential. It helps that you dual-wield, though, so a practical gun in one hand can be balanced with pure ludicrous offense in the other. 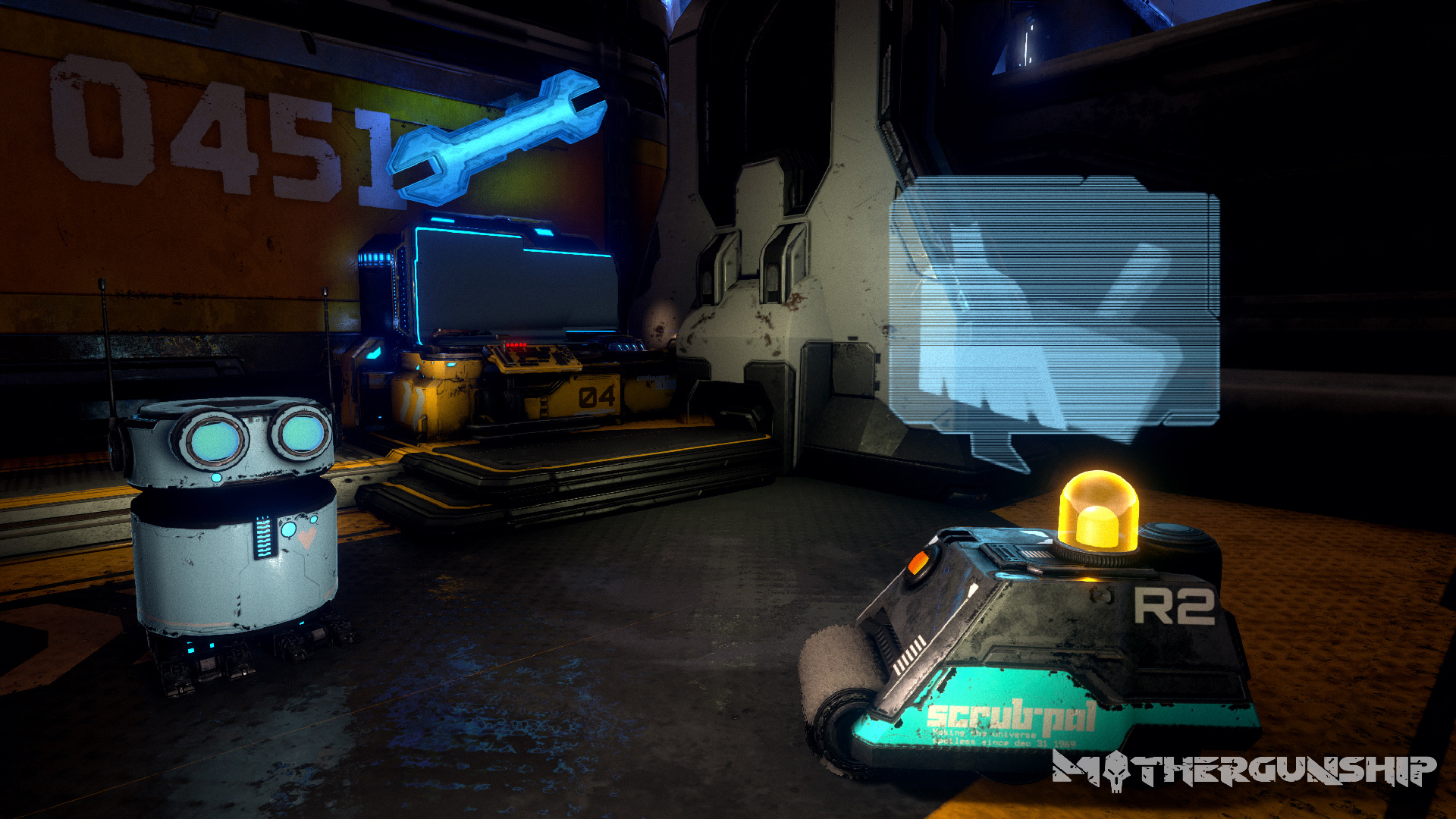 Eventually, though, you’ll be completing missions on one alien spaceship after another, leading to permanent power-ups that let you play with the bigger toys from the start.  Missions come in all kinds of forms, from standard story progression, to daily missions, endless, Nightmare, and more.  For added firepower there are co-op modes available, because bullet hell is much less hellish with a friend.  The road to reaching the Mothergunship isn’t easy and the final challenge should require every ounce of firepower you can throw at the screen, but with a little persistence and a lot of upgrades, it’s maybe possible to save Earth from being another bit of data in an alien spreadsheet.