The example shown to me was a VR rendition of those Surgeon Simulator-type deals. The ones with the floating hands where you yourself are looking over the patient to be operated on. What VREAL offer is a means for secondary parties to interact with this gameplay by essentially jumping into the game World itself in a kind of multi-angle, multi-perspective spectator mode of sorts. This means anything from pre-recorded gameplay to lifestreams become more accessible – free from the one-way direction such things as recordings have long been restricted to. Now I’m not the most ambitiously-staunch of people – I certainly try to keep my expectations tempered by realism and likely restrictions – but how would a multi-angle interaction such as this play into the more commercial of genres such as an online shooter. Or, perhaps against our better judgement, the more asynchronous type of horror games. 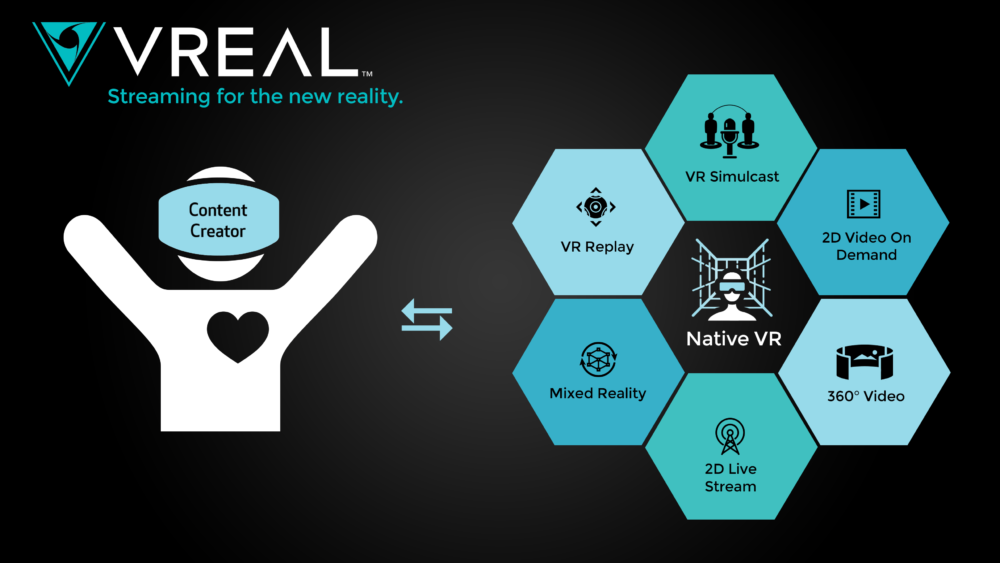 Remember when the launch of P.T – the inevitably-cancelled Silent Hills’ playable teaser – had streamers and viewers alike collectively caught in a hive-mind of four-letter expletives when it was inevitably revealed as something else more profound. Back then, one of P.T’s hidden talents — a mere demo, lest we forget — was the way in which it benefitted (and perhaps exploited) gaming’s growing habit of experiencing that ultimate revelation as a community. And from the perspective of those playing/streaming, of finding a reason to offer something new to their followers that they themselves weren’t entirely sure of. VREAL’s endeavours very much follow in the same vain; recognising that the interconnected and social aspect of gaming has become as much a culture in itself, as well as but one growing cog in the grand mechanism of this very industry.

Rather than simply offering some faux-immersive alternative to an otherwise non-VR action — watching a movie through some bundled-in VR app; this projection now “oh-so innovative” in the fact it’s shown through a head-set…because simply watching it on one’s PC/TV doesn’t go far enough apparently — VREAL instead use the social and technological aspects of VR to enhance it as a platform as well as a hub for software of all kinds. Further proving video games don’t have to be this lone, solitary fixture; instead becoming more and more in parts as more than just something you can watch, but can – to an extent – be a part of. 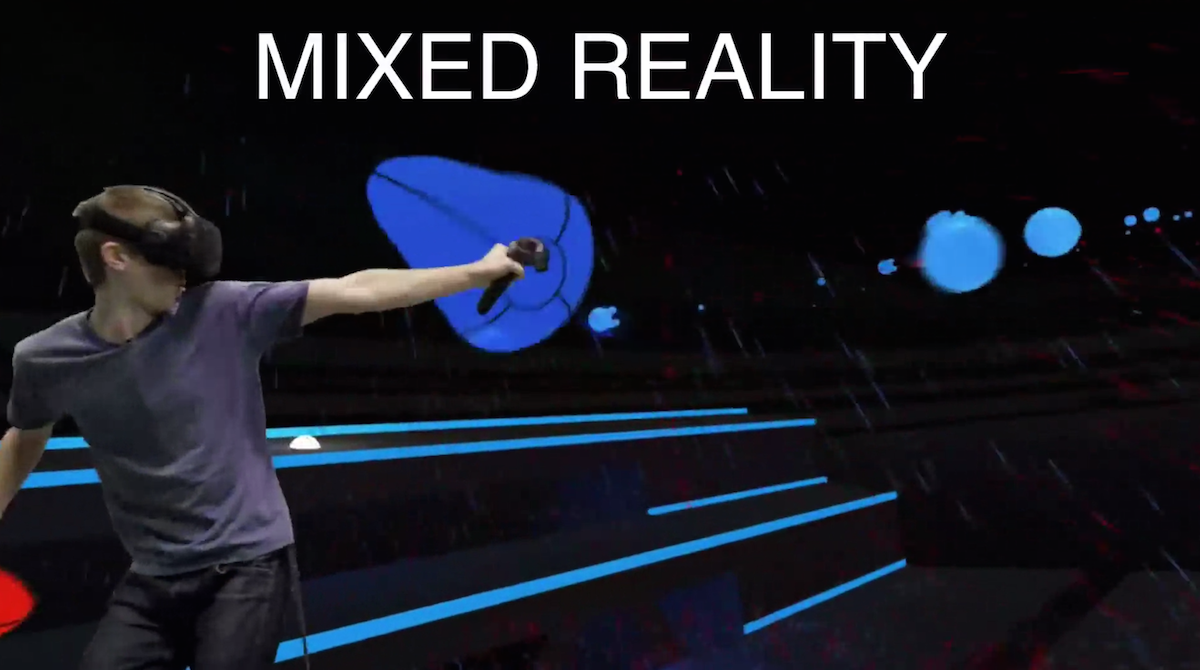 It’s not just consumers — be they players or content creators themselves — that can potentially gain from this new wave of in-progress development for VR as the likes of Owlchemy showcase with their own Mixed Reality Tech. Integrating the likes of green-screen recording to allow for the seamless broadcast of VR games/software from a regular spectator’s perspective as well within the game itself. Think of it this way: a developer may well, at some point, find themselves on stage at a grand gaming conference of whatever affiliation to showcase their latest VR title. While it would go some way to showing how the game will look when wearing a head-set, it can potentially cause an unsettling disconnect when all you see is what the player, at that point is seeing.

Offering a window into how players will act and react — from the perspective of someone not wearing a VR head-set — means the window of presentation and understanding is further expanded. Allowing companies or even critics of the very product to outline not just the experience from the inside — from that of the software — but also from the outside. Regardless of whether they want to encompass a flashy background or plethora of special effects around them. Owlchemy even go as far as to allow the integration of in-game objects so as to grant the player on show even more of a presence within the virtual World of the game on show. As opposed to being limited to, say, a pair of floating arms or vague, faceless avatars with very little unique personality. 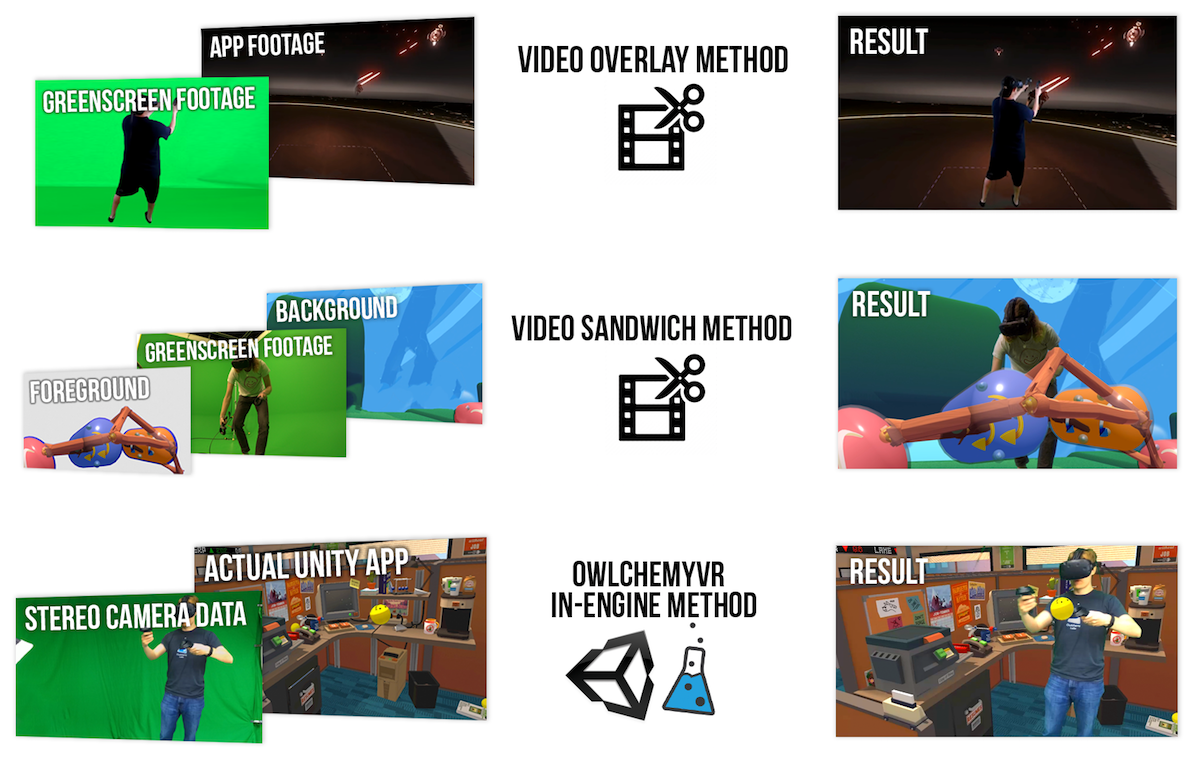 But we still, unquestionably, have a long way to go before VR is even remotely considered as the successor to the conventional, physical system that is the home console or PC. Yes we’ve
had some interesting and even aspiring examples of how virtual reality can be pulled off in a way that makes sense — games that make the most of their platform and create arguably fully-fledged games that are more than just hollow shells. VR though is about more than just the games and there’s no denying the limitation of what’s on offer (not to mention the three-figure pricing for a lot of these devices) remains this particular technology’s Achilles’ heel when trying to actively promote this to the consumer. The means and very executions of its more social and technological feats, thus, are fundamental to get right.

And not just get right, but prove there’s a viable space and market for this kind of thing. From what I’ve seen (literally in some instances), these ideas very much have potential. While I may not be heavily invested — from a personal taste perspective — on all these bases, there’s little means to deny VR, if still in its infancy, is beginning to mature, away from the gleam of the mainstream space. We’re nearing the second decade of the 21st century folks; fiction may well prove to be more imaginative than what reality has so far provided us, but take it from me…out there, somewhere, the potential for VR is building. Slowly but surely.