When we had last heard from Party Hard, the game from tinyBuild and Pinokl about playing as a slasher taking out noisy partygoers, they were branching out into Party Hard Tycoon, a simulation game about crafting successful parties in the first place. Here we are in 2017 and Party Hard 2 is already on its way as well. The fact that this colorful murder simulator is now basically a full-on franchise still seems a bit odd, but as long as the games are still good, you can’t argue with the results. And with Party Hard 2, it’s clear so far that some tweaks are being made for the better, resulting in a quality sequel indeed.

From the moment you begin playing, the new changes in Party Hard 2 become evident. For starters, you no longer have to kill every single person at the party, meaning that there’s no annoyance in trying to separate those last few victims. Instead, you have a set list of goals, ranging from the simple stuff from successfully hiding a body to having to kill an entire group of meth cookers in the back room of the club. And the challenge is still very much present with this change, since you have to devise new ways to successfully isolate your targets. This leads to another notable change in that the bouncers/security guards are back to halt your progress, but now they merely knock you out for a bit if they catch you and carry you away instead of instantly killing you, nicely removing a frustrating bit from the original.

Aside from that, things play out like normal for the most part. You can stab victims as usual, or rig up various death traps like exploding speaker malfunctions to take out larger crowds, all while trying to make sure you don’t get spotted and have any of the partygoers running for the phone to call the police. You do have some new tricks at your disposal as well, such as being able to pick up items like liquor that you can hand out, allowing you to manipulate people around you into becoming intoxicated enough to head up and dance, getting into a crowd that you can take care of as a whole. So there does appear to be a bit more of an emphasis on strategy this time around when combined with the checklist of tasks. 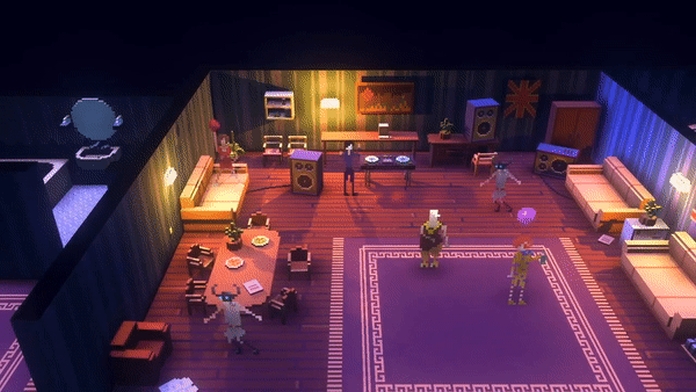 Of course, the other notable aspect is the sequel’s new shift into 3D, featuring 2D sprites against a three-dimensional backdrop. To be honest, it doesn’t appear to add a whole lot that could have been accomplished with original 2D, top-down graphics, but it’s still an interesting look nonetheless, and the switch to a more close-up view as well works fine, providing a bit more detail in addition to allowing for a better view of your actions. Despite the shift in perspective, things control just as smoothly as before as you walk around, slash, use items, and haul bodies to dumpsters. The locations are also still colorful and the music as catchy as before, and it’s all a classic case of a sequel evolving in signature way will still sticking to what made it fun in the first place.

So thanks to some changes in how levels are structured and the addition of more strategic elements, Party Hard 2 looks to contain all of the slashy fun and black humor that made the original a success, while creating a more accessible experience while still remaining challenging. The soiree starts up again this Summer for PC, so make sure to sharpen your best stabbing knives and work on your dance moves by then.