As the great Mabel Pines has taught us, there is nothing more irresistible in life than the allure of the majestic grappling hook. There are indeed many things that a good grappling hook can improve, from rock climbing to social events. And in the case of Tribute Games, they want to use the grappling hook to improve certain areas of 2D platformers, as seen in their latest game, Flinthook. Tribute has already shown a huge passion for wanting to create some of the best retro-styled 2D platformers possible, but with Flinthook, there’s a chance that they may have created their greatest work so far. 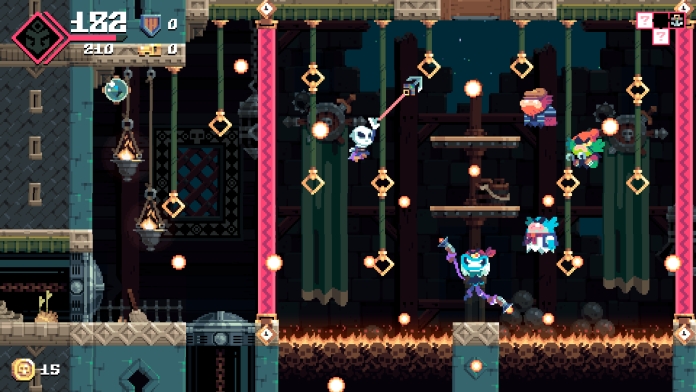 According to team member Jean-Francois Major, one of the main goals in Flinthook was to tackle the vertical aspect of side-scrollers, where they feel that vertical movement can be a bit tedious and slow. So in a manner similar to/inspired by the original Bionic Commando, you utilize a grappling hook in order to fling yourself around and bypass various obstacles, such as spiked pits and enemy projectiles. And by “you,” we mean the titular Flinthook, the little ghost-like space pirate who has to invade and loot his competition on the path to saving the world. Like a lot of Tribute’s other titles, the cartoonish character designs and vibrant 16-bit style ooze charm from every orifice, with some absolutely gorgeous sprites and animation.

Getting back to the gameplay, though, the basic setup is classically akin to a dungeon crawler, heading from room to room in each ship and unlocking more of the map as you head through every entrance, searching for potential treasure and the eventual boss or way out. Getting around via the hefty amount of hooks in said rooms requires a little bit of effort, as expected, but it quickly becomes second nature to jump from hook to hook, and more importantly, it’s a mechanic that just feels damn fun. Maybe you’re zipping away from an enemy, maybe you’re heading up to one to shoot it in the face and make it appear more epic. Whatever the case, it makes for some amazing platforming and combat. And that’s not even getting into the ability to slow down time as well, necessary for a few other obstacles as well. It obviously can’t compare to the grappling hook, but it’s still a nifty addition. 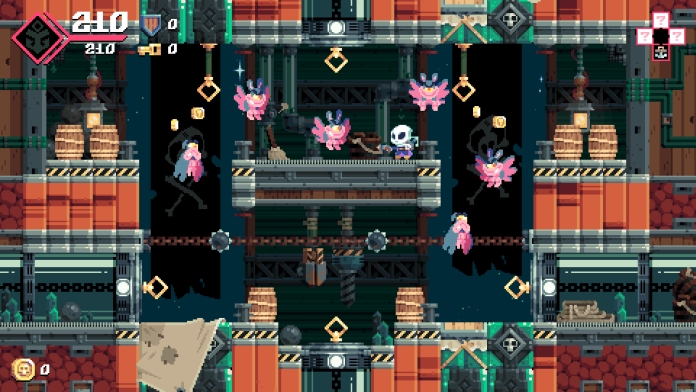 But what makes Flinthook interesting as well is the way it gives out new areas to explore. It does indeed have roguelike elements and procedurally-generated levels, but when dishing out a particular set of stages to select from on the way to your next bounty, you’re given a signifier that tells you just what kind of level you may be walking into. Perhaps you want the more maze-like level, with more potential hazards but a lot to explore. Or the one with several rooms where you have to defeat enemies, if you’re more confident in your combat skills. So there’s a bit of strategy in deciding how to approach each ship and what route to take, figuring out which one suits you best, which is definitely a unique and welcome touch in a game such as this.

So far there has yet to be a part of Flinthook that doesn’t amaze in some way. The level design is superb and uniquely presented, the graphics are a feast for the eyes, the combat is an old-school delight, and of course, the central grabbing hook mechanic makes for some grade-A platforming. We’ll see if everything truly comes together as a whole when the game comes out on April 18 for Steam, PS4 and Xbox One, but it seems safe to say this is another blast from the past courtesy of Tribute games worth checking out.