Oh hey, look! A side-scrolling action game inspired by old-school titles of the 16-bit and late ’80s eras of gaming with highly detailed pixel art! We clearly haven’t seen one of those in a while! In all seriousness, though, it may not initially appear like there’s anything unique about Huntdown on the surface that sets it apart from several similar titles, and having gotten a hands-on experience with it, I can say that it’s a fun game, but what would possibly be its unique selling point? Well, it wasn’t until a few days later that I saw a tweet from someone else who had played the game, pretty much summing it up perfectly: “Contra by way of Escape From NY. Where has this been all my life?”

…Holy crap. I mean, that pretty much nails it right there. How is it that we’ve had several indie games inspired by dystopian ’80s flicks, and several that were tributes to classing run-and-gun action, yet never though to combine the two? It seems so obvious! So yes, Huntdown is basically filling a necessary niche that we didn’t know we were aware of until now. True, the gameplay is largely your standard side-scrolling arcade-style action game setup, where you head forward and blow away any enemy in your path, collecting health and new weapons along the way. And the variety of guns offered is indeed a sweet selection to choose from that has each one deliver a satisfying impact, especially the cathartic feeling provided by the M60, limited as its ammo is. It is indeed some old-school fun, the kind that remains highly enjoyable no matter the era.

But what does help Huntdown grab your attention, as seen in the above trailer. is its colorful, over-the-top style, especially when in comes to the various gangs you take on. Seemingly taking a cue from the likes of The Warriors, each one has their own insane theme and personality, from Quincy punks to biker gangs. The demo we were given prominently featured The Misconducts, a bunch of hooligans resembling a criminal hockey team, down to certain enemies lobbing grenades at you with their sticks. They were fought amongst the graffiti-strewn, decaying urban areas, again nicely reflecting the classic sci-fi and action films of our youth in all their gritty, hyperbolic glory. 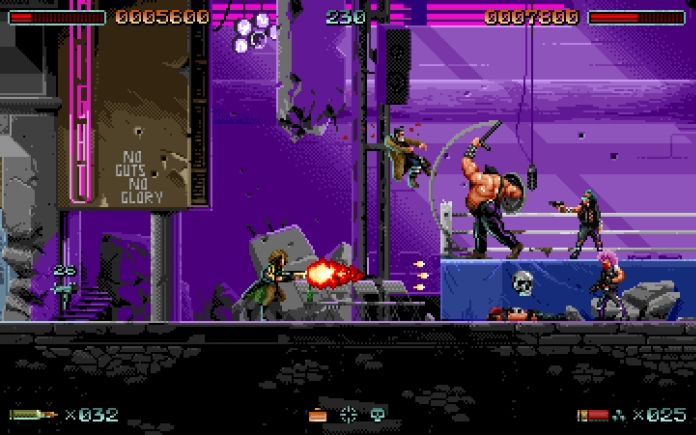 The gangs provide you with your main goal, though, that of hunting down their head members in order to grab the massive bounties on their heads. Shooting down enemies provides you with shiny skulls that give you extra points, but occasionally you may get a chance to chase after a high-profile target like in the demo, where a chase had to ensue over a particularly skeevy dealer getting away. It’s an extra objective that helps make things even more enjoyably intense, and if that isn’t enough, you can always bring in a second player to blow off some bounty heads as well. Yes, true to its roots, Huntdown feature local co-op multiplayer, and playing it with someone else did indeed enhance the experience as you teamed up and efficiently blast away as many neon-haired freaks as possible, like in the good ol’ days.

So Huntdown may be yet another retro throwback to a simpler time when wanton violence was preceded by “Winners Don’t Use Drugs” screens, but damned if it isn’t a really effective one. The merging of John Carpenter and ’90s Konami makes for a solid sci-fi action experience with a ton of flavor, and it looks like one that may be worth plunking down a few dozen quarters for. Huntdown is due out later on for PC, PS4, Xbox One and Switch, so make sure to keep your nostalgic eyes peeled for it.