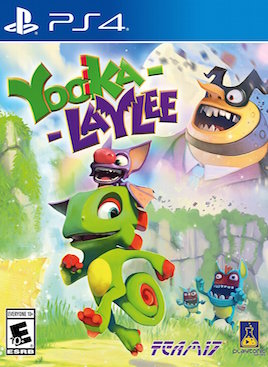 It’d be easy to claim Yooka-Laylee is merely a spiritual successor to one particular IP of that most splendid era of late-90s/early-2000s platforming. While Playtonic go about refreshing our minds by arguably (perhaps blatantly) borrowing quite a few pages from their own former Rare heyday, it’s hard to shoo away the ample epiphanies one gets while playing through the game’s 15-20 hour adventure. An adventure that, while isn’t short of the developer blowing their own trumpet, does so in a way that culminates many a memory — both the good and the bad. The satisfaction of reaching 100% completion in Banjo-Kazooie, mastering one’s move-set a la Super Mario 64 or successfully making a long stride onto a distant platform with Spyro. More still: Crash Bandicoot, Croc and of course, Donkey Kong. At its best, Yooka-Laylee looks, acts and performs the part of a fond ’90s reminder to convincing Oscar-winning finesse.

Naturally, for anyone having played a Rare platformer, the figurative beats Yooka-Laylee keeps to in near-constant rhythm are easy to predict. Whether it’s the delivery of a pun or two (or hundred, as the case may be) during conversation dialogue, or the contextual changes in a world’s theme tune, that doesn’t mean the delivery is any less satisfying to watch unfold. Far from it; Yooka-Laylee‘s brightest spark is its remembering the simpler pleasures of conquering its five main world’s plethora of challenge and coming out of it feeling the genuine champion of it all. Moreso, the sheer unabashed attitude to deliver that same caliber of clever, snarky — and at times crude — writing; within the first hour or two alone, Playtonic take a jab (to keep this video game-related) at remasters, micro-transactions, sequel-baiting and even themselves without as much as a hesitation or battered eye-lid. The jokes and gags, be they verbal or even visual in some cases, seldom falter or fold entirely and while the formula does eventually lose some of its charm and pull by the end, Yooka-Laylee still manages to assert a smile with its end delivery.

A mere replication of a bygone era simply isn’t what Yooka-Laylee will ultimately be remembered for as players make their way from out each of the game’s worlds and, unfortunately, consider the thought that something’s a miss here. While it’s hard not to wonder just what weird and/or wacky characters Playtonic have in store as one unlocks a new world or explores a new expanded part, the fact that my own thoughts were focused more on NPCs than of the worlds they were based in is a major concern. This draws us to Yooka-Laylee‘s biggest criticism: its indecisiveness on whether to up the ante in terms of both its structure and its difficulty, or simply throw up an alternate to what’s come before. The many animate objects and NPCs you exchange dialogue and subsequently solve challenges/puzzles for (from a vengeful cannon, to a clinically-depressed shopping cart, to a troupe of touring snowmen) at their worst betray the 3D platformer’s philosophy of emergent and immersive worlds that players find fun to simply move around in — feeling a lot more like a thrown-in assortment of “stuff” in an otherwise blank and often basic environment. 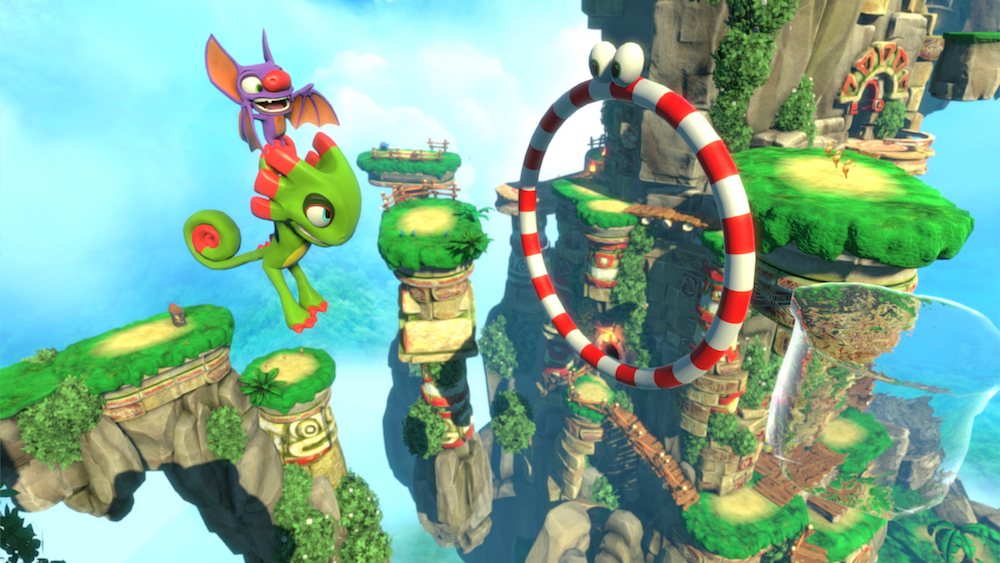 Yet for every less-than-wondrous foray — be it Capital Cashino’s rather overly-spacious, overly-square surroundings or Galleon Galaxy’s uninspiring fleshing-out of its aesthetic (these locales, you might be shocked to hear, standing as the forth and final worlds in the game, respectively) — comes an environment, a world, a design that acts as the counter-weight to Yooka-Laylee’s less-than-sound performances at times. Moodymaze Marsh [World 3], by contrast, is arguably the best level in the entire game; a brilliant and quite eye-opening example of fleshed-out level design that hearkens back to the sandbox-like innocence of Super Mario 64‘s Wet-Dry World or the challenging-yet-rewarding delivery of the original Spyro the Dragon‘s latter stages. Be it its intertwining platforming routes (which double up as challenge sections) or the way it coaxes its players into one of two/three/maybe four smaller paths. At their best, Playtonic carve out an environment (regardless of its size or indeed chosen aesthetic) you feel a genuine urge to both explore and seek out each and every one of its hidden nooks and crannies.

Tribalstack Tropics too, the first world players unlock, while not as intricate still manages to recapture that childish wonder of scouting out areas and setting one’s sight on a particular goal — not leaving until its firmly been achieved. The way Yooka-Laylee so clearly understands its players’ mind-set at points — the fact one has to traverse the outer-regions of an environment, fearful one is perhaps exploiting the game’s geometry/physics and realizing it’s all part of Playtonic’s master plan — is one you can’t help but respect. Some collectibles, specifically the odd dancing Quill or upgrade sitting on a platform that’s near-impossible to reach, only go to further drive home the need to figure out, experiment and eventually conquer the elaborate ways in which certain objects or environments are placed. It makes the inevitable satisfaction of landing 100% completion in a world, or even just finally beating that one challenge that’d driven you insane, feel more palpable. 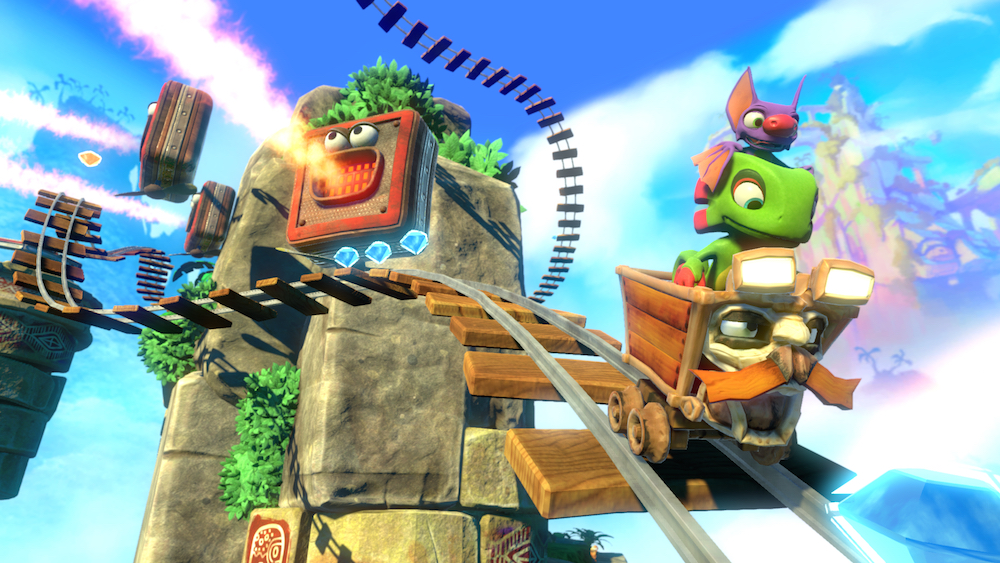 From the return of the “beloved” mine-cart challenges, to the popping up of a trivia quiz (in which the visual “guess the world this close-up is from” questions are still the hardest to get right) now and again, even when nostalgia is throw into the mix, it’s these very specific, very Rare-like tropes that are no less orchestrated and delivered so cleverly in the grand old scheme of things. Even if you fail (for the umpteenth time), or perhaps grow tired of having your theories proven wrong in a certain puzzle, there’s often plenty of additional tasks and even unexplored routes to tackle alongside. And this is down largely to how well Playtonic, even with the less-than-stellar “is this it?”-garnering world environments, still manage to offer an abundance of choice and non-linearity, the majority of times, to tackle with but a simple flick of the analog stick.

I say majority of the time as Yooka-Laylee does have its fair share of linear sections now and again — the guarantee of finding something worthwhile often a miss sadly, leaving it firmly in the realm of chance and the potential cost of time better spent on something else. Be they the expanded areas of a world (unlocked via a required amount of Pagies) or indeed how certain challenges take shape. Don’t get me wrong, if you thought Playtonic were going to play it casually and/or easy with their horde of puzzles to uncover and subsequently beat, well you’re definitely in for a shock. Despite the real meat of Yooka-Laylee’s difficulty only emerging by the third world — which features quite an unexpected spike in such difficulty — don’t be surprised if you end up hurling a salvo of four-letter curse words at your TV/PC screen. Not that this is inherently bad or wholly detrimental; the challenges themselves, varying from pushing objects to a goal, powering jet streams in labyrinth-style mazes or simply passing through a set allotment of goggly-eyed rings. If there’s one thing Playtonic can’t be faulted on with this particular facet, it’s the variety of ideas they rustle up, not to mention the way some are so deceptive in their difficulty. Though a few less regurgitated slot machines would have helped.

The fact that some of these challenges require an ability you’ve yet to obtain by that point (another recognizable cliche from the N64 days) can not only annoy, but throw serious questions as to Yooka-Laylee’s occasional mishap in clearly communicating what’s required. Not that the complaint is down to some blanket critique on challenges not being blatantly explained and/or told to the player. Playtonic do, for the most part, strike a fair balance between showing and subtly telling — a trait many AAA developers should strive. Yet for every visual clue and sufficient amount of hinting comes a puzzle that is either poorly explained or placed at some of the more peculiar points in the environment. One puzzle involving an ice block and ray of sunlight giving me horrid flash-backs to Dark Souls 2’s lighting/burning the windmill — instances that suffer from a lack of earlier in-game demonstration players would simply not have been able to solve (or even know about) outside of a walkthrough/guide. 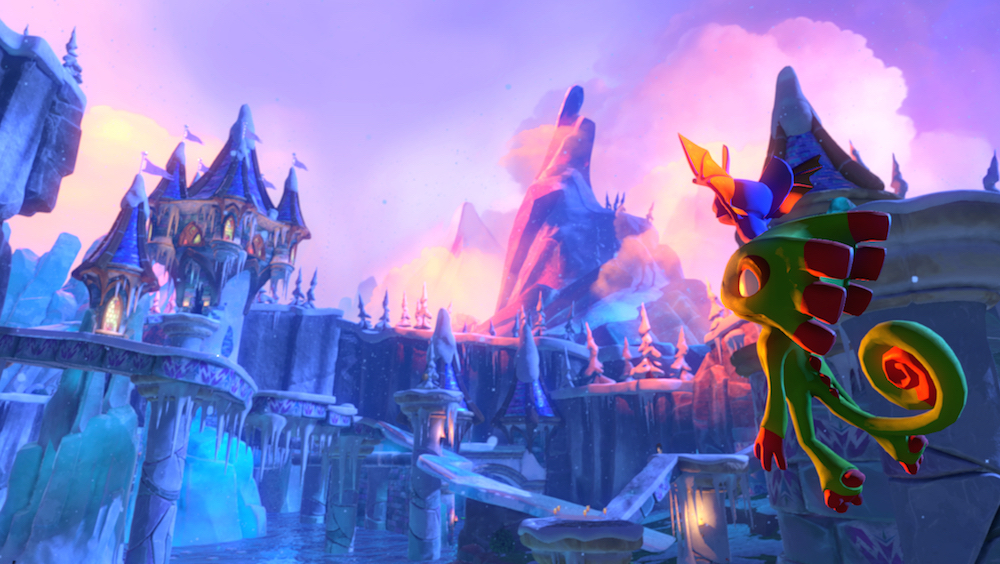 Sadly these small little irks aren’t the end to Yooka-Laylee‘s screw-ups — the biggest complaints centered on its more technical and pre-programmed areas, especially when going about actually controlling one’s movement. Playing this on a [base] PS4, the game can drop a frame or two from its relatively stable 30FPS mark at unpredictable points — only once suffering from notable slow-down due to the volume of animation taking place on-screen. Yet it’s the camera that can become the biggest grate, especially when trying to do something as simple, but time-savvy, as hitting a switch in a tightly-congested area or simply keeping the camera fixed in a particular direction. When time is of the essence and you feel cheated out of success due to an unruly, skittish camera, players can come away feeling cheated. And that’s without mentioning the controls to some of the unlockable transformations in each world — Galleon Galaxy’s offering when stumbling (and I mean that literally) across the level’s boss battle, bordering on outright atrocious to handle when restricted to a fixed perspective.

Along with some questionably looser movement outside of puzzle-solving — a consequence from Yooka-Laylee’s greater emphasis/promotion of constant momentum, even if it does make the less agile moves a little precarious to perform — the fact the player can even get stun-locked after taking damage, losing not one but potentially three sections of life due to the more clearer pre-programmed animation, feels like a disappointingly basic error and blatant oversight on Playtonic’s part. Given especially how well the game, outside of these temporary issues, flows when the player is happily trotting along, hopping between platforms at a near-constant speed. 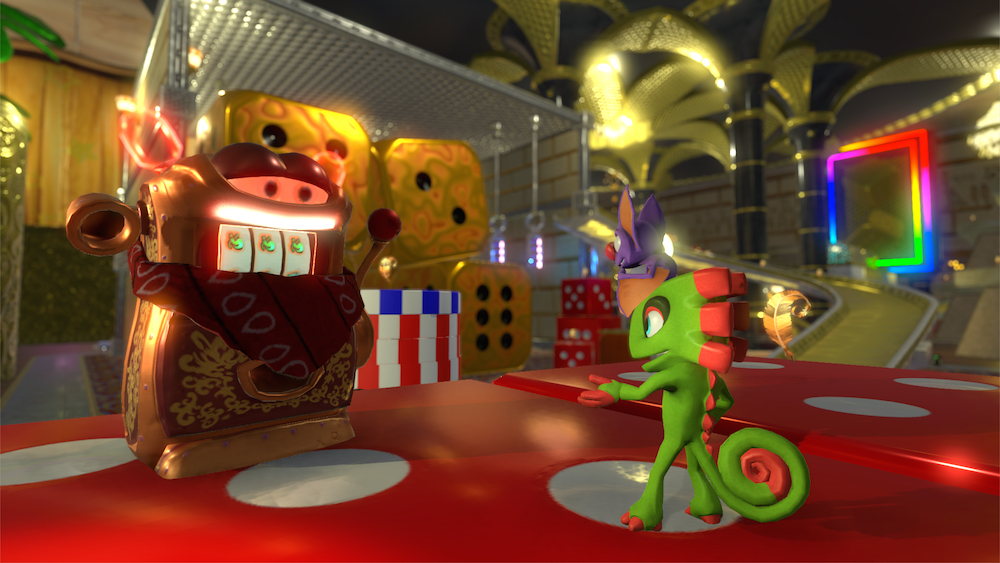 Technical issues aside, there’s little to argue against Yooka-Laylee doing a fine job identifying just what makes 3D platformers such a joy to invest in aesthetically. Yet for every ingenious use of level design or brilliantly-sinister, hair-pulling puzzle along the way comes the more superficial choice of an unruly control scheme that only goes to frustrate players at the most critical of moments. Regardless, whether your expertise in this genre is that of a veteran or complete newbie, there’s plenty to admire and even chuckle at through the game’s charming, varied cast of characters and on-point writing at the best of times. While Yooka-Laylee’s less-than-clear communication gameplay-wise does toss up a baffled look on more than one instance, its efforts are still enjoyable.