Recently I had a chance to sit down and chat with Douglas Bogart of Limited Run Games.  It’s been a huge year for the company since we got to talk last, and in that time LRG has risen from releasing a handful of titles to being on the verge of clearing fifty releases between the two platforms it currently publishes on, with dreams of maybe adding a third console to its Sony-centric mix.  The interview ran long, covering a good number of topics, so this is part one of two (read part two here).  There’s a lot to catch up on so here we go:

[Hardcore Gamer] So how has last year been?

[Douglas Bogart] It’s been extremely busy.  Signed a lot more games, had an even more dense release schedule.  It’s been hectic; we hired more people to work for Limited Run so it’s no longer just two people.  It’s still two of us doing the main part of the business, which has been getting the games and getting them produced, but finally had to hire an actual support team. Hired a shipping team; fulfillment’s all in-house again.  We had a nasty scare last year where we had outsourced fulfillment and they did a bad job, so in order to make sure our customers are getting the best packages they can, we now do it ourselves to make sure that it’s being done properly.

It’s interesting now too because devs reach out to us more than it used to be.  It used to be the other way around, like a lot of time we had to beg developers, now they’re all telling each other about us.  We have a good reputation right now that we’re trying to maintain, so everybody seems to be really happy with us.  I would say another thing that’s crazy is how many competitors have shown up just in over the year; it shows that we’re doing something right.

How many games did you end up releasing in the last year, because I know I lost count.

This year I know that you had the first part of the year packed a little bit more than it turned out to be packed with, so you’ve got a couple more on the way for March and April.  What’s the rest of the year looking like?

The rest of the year’s looking good.  This month we have Runner 2 followed by DariusBurst (Editor’s note- the schedule changed a bit since the interview) and then we have some other games in there like Astebreed and Mitsurugi, Drive! Drive! Drive!, Tharsis, and all the Choice Provisions games.  And then after that is a bunch of games we haven’t announced yet (Editor’s note- like the recently-revealed Flintook).  That’s looking pretty hectic, so it’s going to be pretty crazy but we are finding spots to give people breaks, I guess their wallets breaks.  It’s going to be a crazy year, definitely, that’s why we include now the loyalty program.  That way now when you buy a game you get a ticket; you can actually turn these tickets in to get something from our store.  We also are doing hold shipments and combined shipping now to help people that feel like our shipping is too much, especially international customers.

I know you have a lot of international customers… 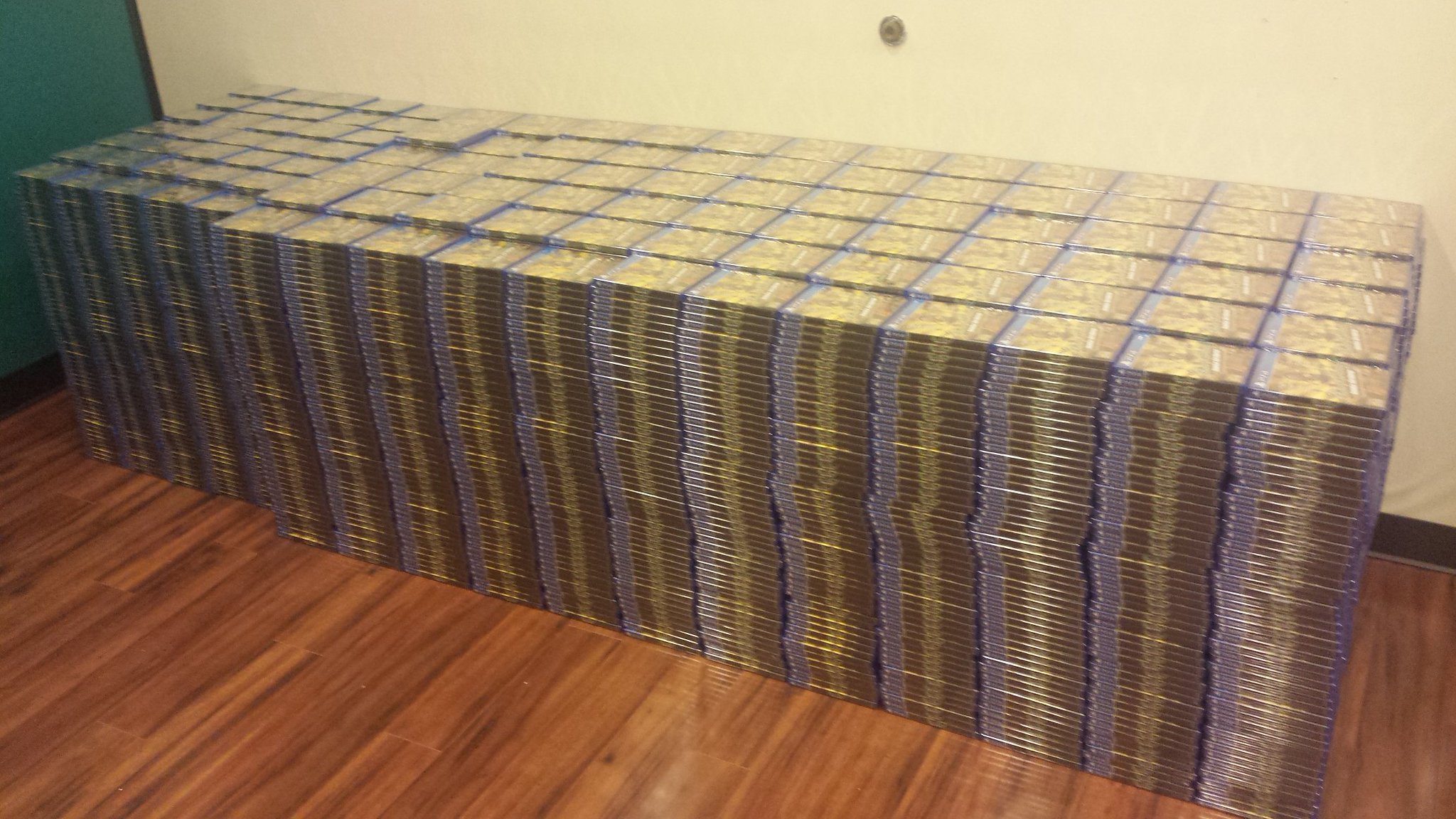 Do you have anything you can talk about for the Switch yet?

I can say that we have reached out to Nintendo, and we’ve talked.  They seem interested and we’re interested; I can’t say if anything’s going to come from it but I can say we are a lot further along than we ever will be with Xbox.

Has Nintendo talked about minimum print numbers yet?

Now with us, all we’ve ever heard is rumors.  I know that it’s not a lot; it’s a much smaller amount than what Xbox is requiring.  It’s probably more on a par with whatever Sony is doing.  Probably just because they own their own factory and it’s SD cards.  So I know that from what I’ve heard it’s smaller, and I know their prices seem fair, so that’s another reason why we’re definitely interested in working with Nintendo.  They seem way more indie focused this time.

Yeah, the number of developers I’ve talked to and seen working on Switch games is incredible.  It’s far more than I was expecting for a console that just came out.

It’s definitely the polar opposite of what the Wii U was.

The Switch is looking to be a monster of a console as it ages over time.

…once the Vita is dead in Japan.  You’re going to find all the quirky games.  The reason that people love their Vita, that’s probably what the Switch is going to be.

Assuming for a moment you do actually get the Switch, that will be a potential three consoles.  Say you get a game that comes out for Vita, PS4, and Switch, would you be making any concessions on the release schedule for the buy-everything collector, or would they just have to deal with three at once?

It depends on when the Switch version comes out.  If we’re talking to a dev that already had their game out on Vita and PS4, and they’re like “Oh we’re going to have a Switch one but it won’t be done until this amount of time” then we might release the PS4 and Vita version before that just so that way it’s out, and do the Switch version later and just let people know that the Switch version’s coming.  More than likely though we’ll probably do what we’ve been doing and release them all at the same time.  If we do a Switch, or Xbox, kind of what we did with out PC release, it’s going to be a separate part of the Limited Run line.  It’ll be numbered as Nintendo Switch Limited Run #1.  It won’t be included as part of the overall catalogue.  We’ll just keep the Sony stuff bunched to itself; that way Nintendo fans who have no interest in buying anything Playstation-wise, they can feel like they have their own collection of Limited Run stuff that’s strictly Nintendo.

Every LRG PS4 game from 2016 plus a stray going for the photobomb on the right.

I was also thinking in terms of the “Gotta have every single Limited Run release” because there’s still people doing that, probably more than I know, honestly.  And the question of course is the Vita still going to be releasing games when the Switch is hitting its stride?

That’s a question for everybody, honestly.  You’ve probably got a better guess than I do, but…

I feel like the Vita market’s going to run out soon, which is why we’re starting to look towards the Far East for games.  Thinking about maybe trying to bring some games over that never even got here before, because I feel like the Vita market in the west is… We’re going to run out eventually, especially at the speed we’re going.  There’s going to be a lot less video games to go because Sony’s not really pushing that in America as much whereas it’s still doing really well in Japan, so you’re not going to see a lot of indie devs still making Vita games one day.

One of the things I’ve noticed about the releases is that the Vita games always sell out before the PlayStation 4.  The Vita market seems to be a hungry market.

Yeah, so our Vita releases definitely sell better because they’re hungry, like you said.  That’s why when anybody announces they’re doing a Vita version and then cancel it they get the most flak, because Vita fans feel even more slapped in the face, because they’re supporting a console that they thought you were supporting, and then you cancel your project; that means one less game that they have.  That’s why I’m hoping Vita fans, eventually when the Vita starts to kinda like die down, make the switch to the Switch.  I feel like that’s a good… it’s kinda the next handheld.  It’s a good way to migrate.  We’re going to support the Vita until Sony tells us not to, so you don’t ever have to worry about Limited Run saying “We’re done with Vita.”  If we say that, that means that Sony told us.  We’ll be here for the Vita until it’s absolutely dead.

I remember reading in the Gaijinworks Forum that Victor Ireland was talking about how they supported the PSP right up to the point that you couldn’t print those things any more, the UMDs.

Yeah, he had the last print, Summon Night 5.  That was the last PSP game to ever be printed, and then after that I think they shut the plant down, so he definitely kept going.

While that period is not here for the Vita yet, you can definitely feel that it’s coming someday.

Yeah but, if you think about it, when the Vita was released, and if his was the last one, that was a good almost-decade of PSP support.  I feel like they’ll keep Vita around for a while, even if the developers aren’t necessarily doing it.  There’ll be people like Victor and us that are still going to be pushing for it.

Talking about the publishing rights reverting to the developer/publisher after your print run is done, so far the only one we’ve seen is EastAsiaSoft reprinting Soldner X-2.  Although that was Asia-only, that wasn’t a US release was it?

No, it was Asia-only.  The only thing about it that made some people upset is it’s a shmup, so technically what does it matter if it’s another region?  That’s what their opinion was.  I was ok with EastAsiaSoft doing it, I mean it’s their game; they can do what they want.  I wish they’d just waited a little longer because the announcement was pretty quickly after ours.  So that’s probably the only thing going forward we might just try to keep ours a little more exclusive a little longer.  But I definitely am 100% not wanting to hold anybody’s game hostage.  Like if they want to do a reprint they should do it; the whole point of us doing this is to be dev-friendly and to help the devs make money.  It’s also so we can own it, I mean it’s a selfish reason- I want to own your game physically, I want you to own your game physically and your fans to own it, and I want you to make some money off something you thought maybe you couldn’t do.  So that’s why we exist, to help other devs.

And that’s the first part.  Head over here for the part two, where we cover indie vs Japan and the growing world of small-press game publishing.