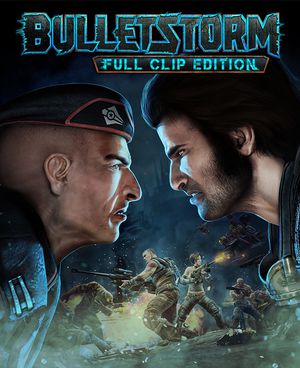 While 2011 may not seem like that long ago, the gaming industry has seen substantial change during the past six years, making titles that released around that time seem a bit more dated than they truly are. 2011 saw the launch of the original Dark Souls, with the series having reached its likely conclusion this past month, as well as sequels in the Uncharted, Deus Ex and The Legend of Zelda franchises, each of which had not received new console entries since then until just this past year. That year also brought some new potential-filled IPs that have yet to receive a second entry due to various issues, such as L.A. Noire and, more relevantly, Bulletstorm, a unique FPS with plenty of attitude from developer People Can Fly. While the title was mostly well-received by critics and fans at the time, lackluster sales halted any future buzz for the potential series, until last year’s Game Awards, where Gearbox announced that it would publish an updated remastered for current-gen consoles, subtitled “Full Clip Edition.” With first-person combat that remains unique to this day, an improved presentation and a fun piece of cameo DLC, Bulletstorm: Full Clip Edition is a solid, if somewhat dated, remaster of the 2011 FPS.

Bulletstorm offers three mostly similar modes, with the campaign being the most unique of the bunch. The story stars Grayson Hunt, a former assassin with poor judgement skills, a foul mouth, and a grudge against his former boss, the equally vulgar General Serrano. After he and his cyborg pal Ishi crash land on the abandoned planet of Stygia, the two must fight their way through hundreds of the planet’s crazed inhabitants, as they track down a means of escape. While the plot does make some valid attempts at evoking emotions for the game’s central cast, most of them fall flat, as the constant one-liners make it hard for players to take Grayson or Ishi all that seriously. The humor of the game is mostly hit-or-miss, as the cuss-filled quips range from problematic or simplistic to clever and well-crafted. The biggest draw of the eight hour campaign is easily the set piece moments, as larger-than-life obstacles and environments can create quite the spectacle as they come crashing down around the player.

As a whole, Bulletstorm’s laurels rest heavily on the fast-paced combat, which heavily favors and encourages unique kills via the player’s bullet, leash, and boot-centric abilities. While the guns offer little variety compared to a standard FPS (aside from the Sniper Elite-like sniper rifle gameplay), much of the killing relies upon sending enemies flying into the air, either by dragging them closer to or launching them into the player’s gun, or a deadly obstacle of their choice, such as dangling electric wires or exploding red barrels. These extravagant kills grant players points via the “Skillshot” system, which in turn can be used to buy additional ammo or weapons. As creative as this combat system is, it can occasionally seem a bit repetitive, as a minimal amount of enemy and environment types lead to plenty of identical kills that are more fun to watch than to participate in. Nonetheless, finding new skillshots proves to be a pretty constant source of enjoyment, as the first-person warfare still manages to stand alone from anything else out there. 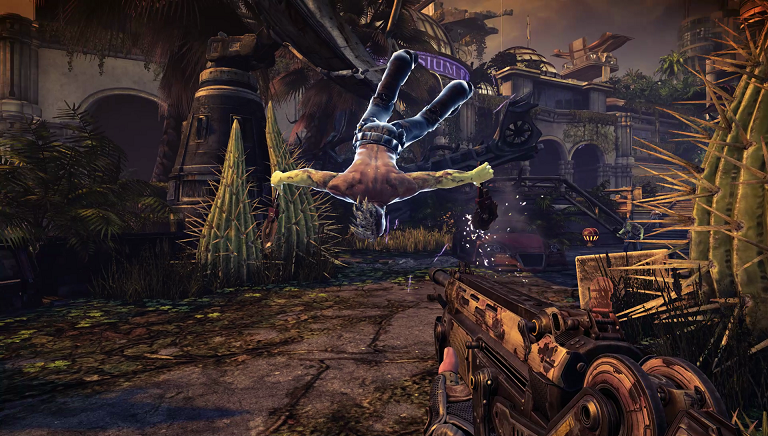 Bulletstorm’s additional modes, Echoes and Multiplayer, both rely upon the hope that players will continue to pursue new opportunities to experience the game’s combat, even though most of the joy found from said combat will be satiated by the campaign. Outside of the natural drive that leaderboards provide, neither horde-based mode really offers enough depth to keep that murder-based momentum alive, save for the Ultimate Echoes mode, which adds unique limitations to the short combat sections that spices things up for more experienced Bulletstorm players. The bonuses of Full Clip Edition do help add some further playability to the game, as six new Echo maps and the post-campaign completion unlock of Overkill Mode bring some new experiences for prior Bulletstorm owners. The most tantalizing addition is Duke Nukem’s Bulletstorm Tour, which stars the classic 90s FPS hero as he bewilderingly quips his way through the campaign. While the writing clearly suffers whenever Duke is forced to use the same dialogue as Grayson, there’s still plenty of clever nods that help keep the Bulletstorm Tour from feeling like a hastily-added clone of the campaign, even if the story is a little more nonsensical because of it.

The enhanced visual presentation of Bulletstorm never reaches truly impressive heights, thanks to some outdated textures and facial animations, but the improved framerate and resolution do offer some solid results, particularly during the aforementioned set piece moments. The framerate doesn’t do a whole lot to improve the combat though, as much of the action still relies upon kicks and auto-lock leashes as opposed to precisely-aimed shots. The soundtrack, while mostly overshadowed by the bullets and screams of agony and death, is fittingly epic for the occasion, even if it won’t stick with players afterwards. There were no clear instances of bugs or glitches during our time with the game, although we were unable to test the stability of the multiplayer servers. The game does also offer options to eliminate vulgarity and blood and gore from the campaign, for players solely looking to experience the unique combat without Bulletstorm’s signature attitude. 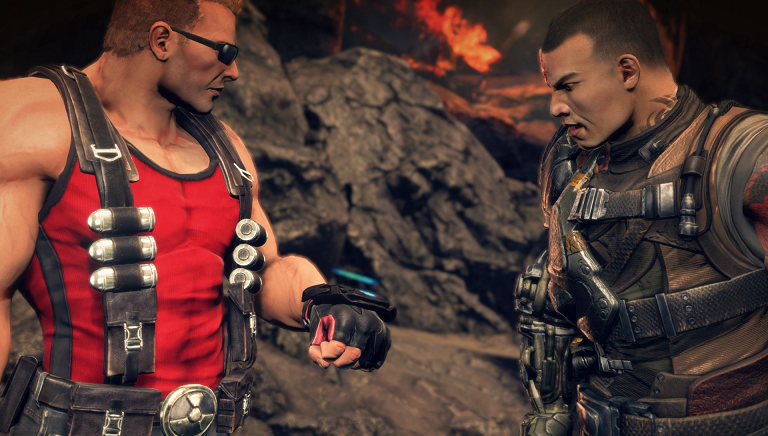 Full Clip Edition represents the most complete and enhanced way to experience Bulletstorm, as some smart additions and an improved presentation help breathe new life into the 2011 FPS. Many of the game’s issues from the past still remain, as some questionable one-liners and depth-lacking modes are still present for this 2017 remaster. But the core FPS combat still remains one-of-a-kind among its fellow shooters, as the high-flying action urges to be experienced by both veterans and newcomers alike, as long as you’re willing to get your boots a little dirty.