A run of cool little car toys in the early 1990s were known as Micro Machines. Over the years, the franchise spawned some fun video games that were great to play with friends. Recently, Codemasters had developed a mobile game based on the franchise. Now, that same team will be releasing a new game for consoles called Micro Machines World Series. It will focus on the multiplayer experience, both online and local. We took some time to speak with Gavin Cooper, the Chief Game Designer behind the project for Codemasters. He shared his thoughts on the differences between the console and the mobile version of Micro Machines, along with his personal experience growing up.

[Hardcore Gamer] Is there still a market for Micro Machines and will this game get people back into them?

[Gavin Cooper] I think that’s more of a question for the Hasbro team. I know they started releasing some new Micro Machines for the first time in a while with the new Star Wars movies. I don’t know if they are dipping their toes back in the water to see if there is any interest out there.

Electronic Arts produced a mobile Micro Machines game that was developed by Codemasters. What will be the difference between that version and this version?

So this new version doesn’t share much with the mobile version at all. For all intents and purposes, we brought it back down to the foundation and built up a brand new game. The mobile version is very different, a free-to-play game. It used our EGO technology. We are on a completely different technology base now. We’re using Unity. It’s structured as a console game. It’s not free-to-play. It’s a console title with no micro-transactions. It’s an entirely new game. 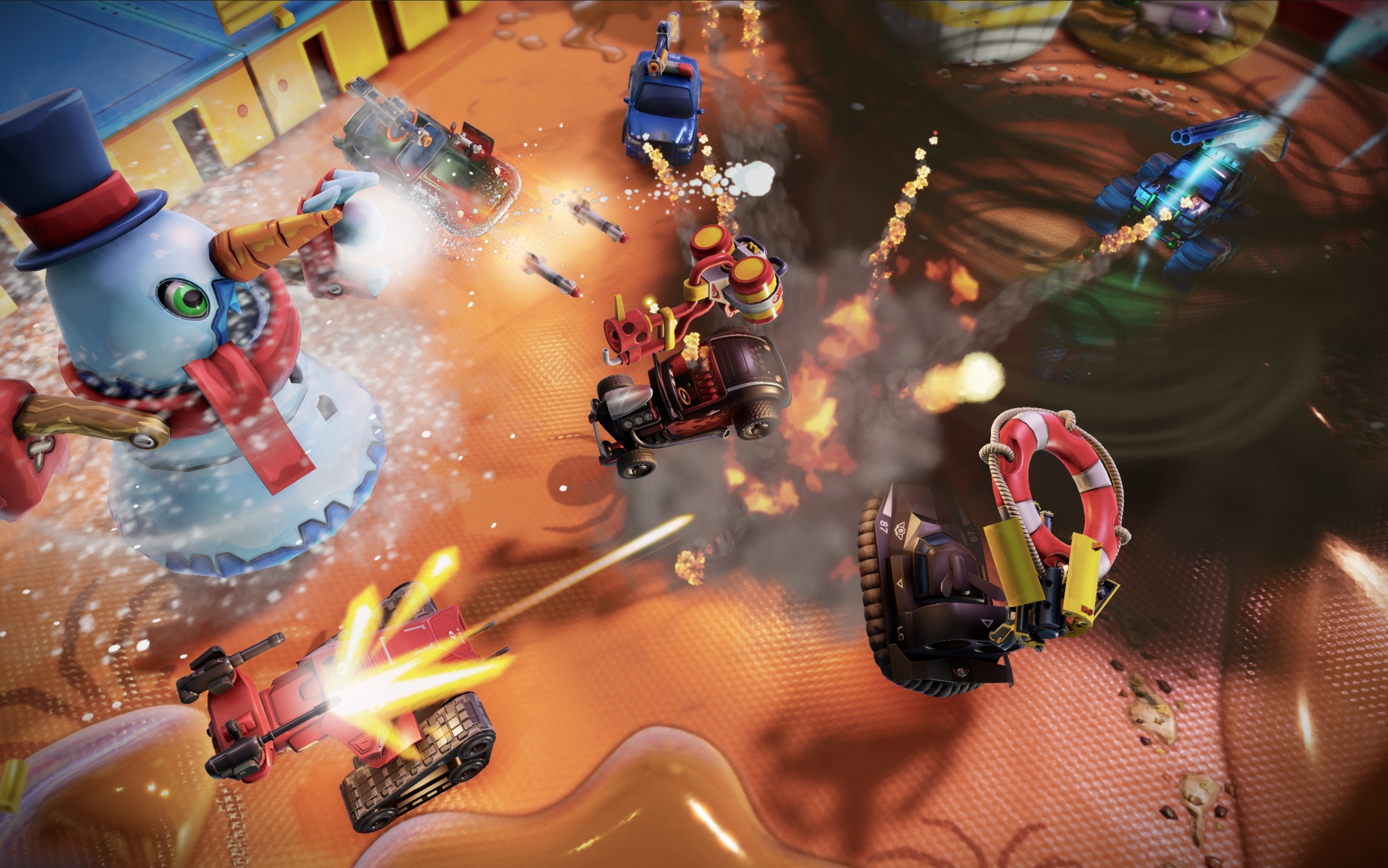 What is the goal in bringing Micro Machines to consoles?

We did the mobile version and the feedback we got was that people wanted a Micro Machines game on console. At this point, it is what we were being asked to develop.

Do you have a release date and what type of content can be expected?

It will be later this year, June or July time frame. In terms of content, we’ve got 10 tracks, 15 arenas, 5 battle arenas and 12 cars. It sounds like a smaller number of cars, but in the mobile version they were essentially different skins. These 12 vehicles, in terms of the battle mode, are entirely unique. They each have their own load outs and unique abilities also the customization aspect will be skinned to look quite different. In terms of the cars, there’s quite a lot of content there. We will have quick play for online play. We also have ranked play with seasons which will last about six weeks. It will offer players ways to score points and offer prizes as they go. We also have the Elite Division, which is leaderboard-based with prizes within certain thresholds of that division. We have local multiplayer, as well. In terms of game modes, we have a 12 person race, elimination with 6 online and 4 local where you knock people off the screen. We also have battles which are Capture the Flag, King of the Hill, and Bomb Delivery where players push a bomb into each other’s base. So that’s a lot of content. 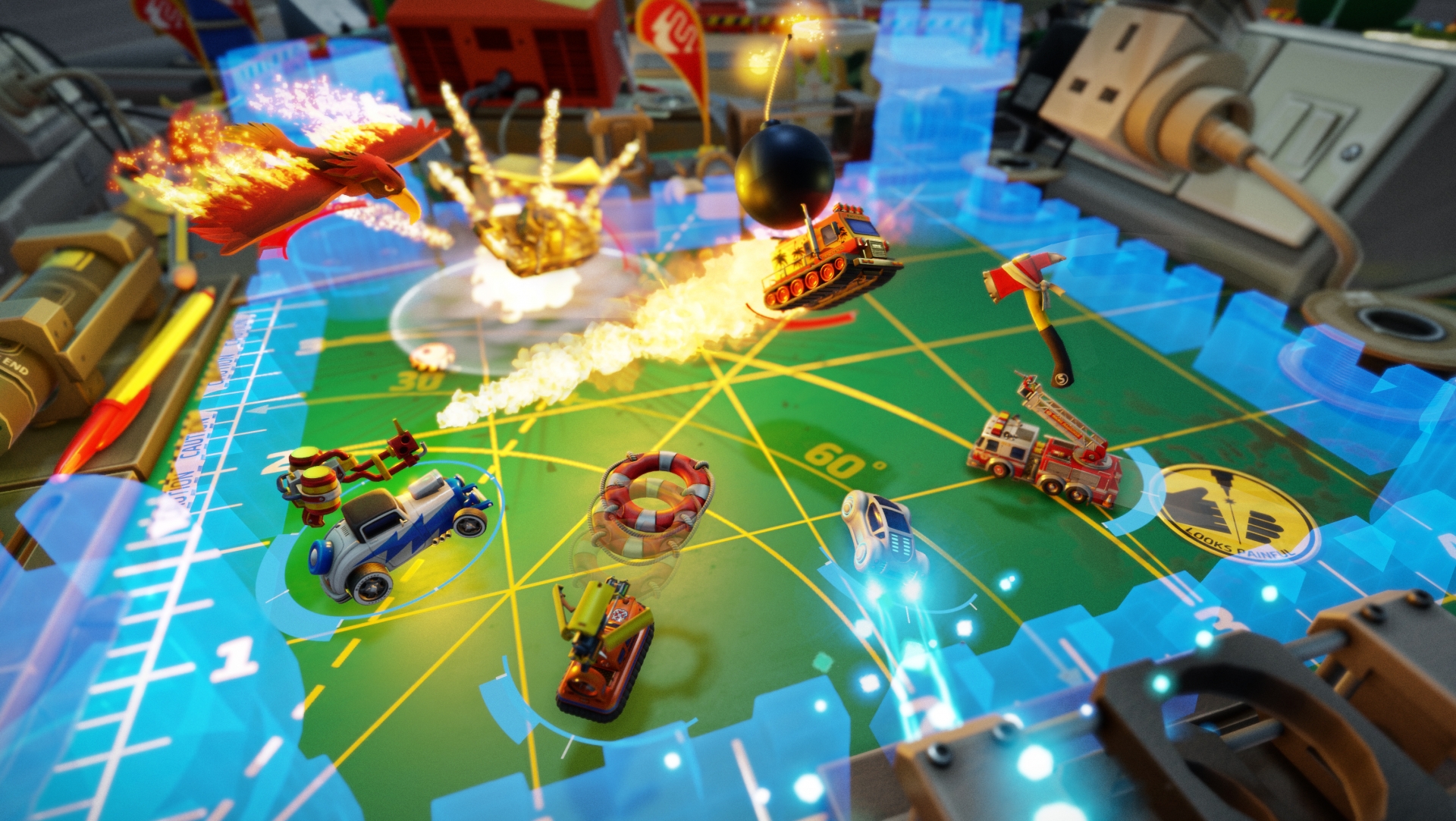 They have been really good at letting us sort through their sandpit. Probably the first thing are the cars. Two out of the twelve cars on the roster are based on G.I. Joe, the Mobile Tank which is a big green tank, and the Cobra Hiss Tank. Both are created appropriately based on the cartoons. We have arenas based on Hungry Hungry Hippos and Ouija Boards. Race Eliminations are based off power-ups from Nerf.

Will this be a full price retail game and will it release as a physical copy?

There will be physical copies. It won’t be a full price game. Somewhere around $30.

From a technical aspect, what does the console provide that the mobile version couldn’t?

Visually, there is a massive uplift from the mobile version. We are very happy with it. To be honest, the biggest and most obvious thing that the consoles let us do that the mobile doesn’t is that they are consoles. You’ve got a controller, you have a degree of fidelity in the moment-to-moment gameplay that you can’t get on a touchscreen and that has let us change the way the game plays. It’s skill-based and there is stuff you can master. Micro Machines has always been a game that has rewarded skill and track memory. 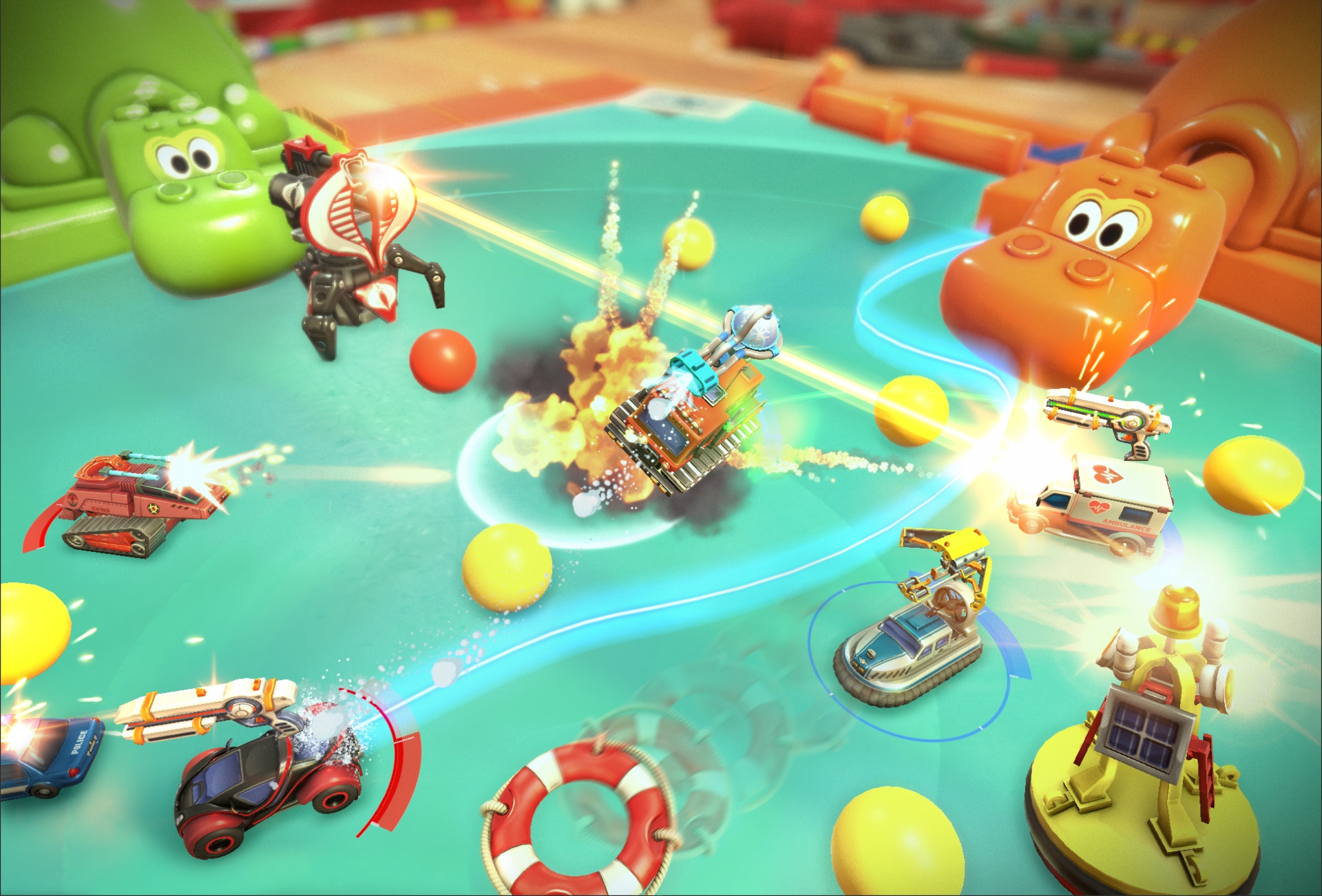 Do you have a personal fascination with Micro Machines?

I do actually. I do love Micro Machines. I probably came onto it a bit late. My first big Micro Machines moment was probably V3 on PSX. I played the early ones, but when I was a kid I didn’t own a Megadrive or anything like that. But PlayStation 1, we had one of those in the house so V3 was my big experience. Other people on the team have different experiences. I really love Micro Machines. It’s a big part of, when I think of Micro Machines what I think of is that smackdown, social experience with your mates. It came out at the right kind of time, we were all young adults, going to each other’s houses and that kind of stuff, but that remains to this day. That sort of play I really enjoy even as an adult. Micro Machines invites me to still play in that kind of manner.

Will there be any DLC or more G.I. Joe vehicles?

There’s nothing we can announce on DLC at the moment, but we have built the game in such a way that there are loads of avenues to explore in terms of DLC in the future. Depending on what route we go.