Last year, I began to take note of an oddly increasing subgenre of games that we simply referred to as “angry mob simulators,” made up by the likes of Okhlos, Anarcute, Tonight We Riot and others. Games where you have to basically convince and command a huge mob of civilians into rising up against some sort of army. And upon looking at Tooth and Tail, the latest from Monaco developers Pocketwatch Games, I thought we may not only have another one on our hands, but that now we were mixing it with real-time strategy games. And now having played it, I can say that it arguably may not qualify to be in that particular subgenre, it has some slight shades of it that put a unique twist on RTS games, one that makes for a more up-close and possibly more addictive experience.

Mind you, even if the element of angry mobs isn’t always present in the gameplay, the themes of revolution are highly present, even just from looking at the game’s Soviet-inspired logo. The setup so far is that four factions of animals are duking it to determine their place in the food chain, fighting over who gets to eat who. Yes, the shades of Animal Farm are present here, assuming that Animal Farm had flamethrowers and gatling guns. But the revolution-esque art style is quite eye-catching indeed, and crossing with the hi-bit pixel art in-game, makes for a unique blend of visuals that’s a treat to look at.

But the other notable way that Tooth and Tail brings the mob into the focus is in how you build and command armies. Directly controlling a flag-bearing leader, you have to move around the map and stand near any forces you’ve spent time planting, then hold down a button to rally them and lead them over to any enemy bases you want to take on. While you can use standard point-and-click controls, this is a game designed to work just as well with gamepads, and having tried out the latter control scheme with a hands-on demo, I’m pleased to say that it works just as well, perhaps even slightly better given the way things are set up. 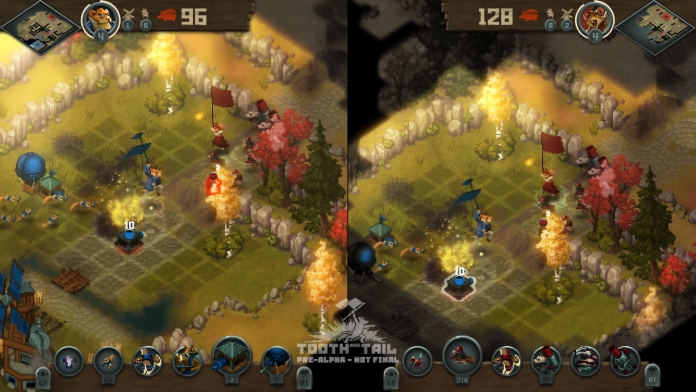 Tooth and Tail features randomly generated maps, you see, where part of the thrill is roaming around like in a top-down adventure, exploring and unveiling more of the land. You uncover various posts to start setting up farms at, which eventually generate resources in order to purchase more units. Said units come from a selecting five different types of animals out of a starting pool before each match, meaning there’s a good chunk of strategy both before and during the game in deciding what kind of army you should focus on, and what part of it to bring into the fray during the actual skirmish. Take out all of your enemy’s posts, and you win, making sure to try and set up proper defense for when they come gunning for you as well. So it definitely has some the more classic elements of the genre as well, while still providing some unique twists.

Tooth and Tail has been getting a lot of notable praise so far, and it’s not hard to see why. It puts a bit of a revolutionary spin on the RTS genre (pun semi-intended), mixing fresh mechanics with a tried and true setup while also making the most out of its anthropomorphic cast and anarchic themes. It’s easy to jump into and feels like a game that’s hard to put down and hopefully that will still be the case when this petting zoo/warzone combo comes out in the future for PC and PS4.