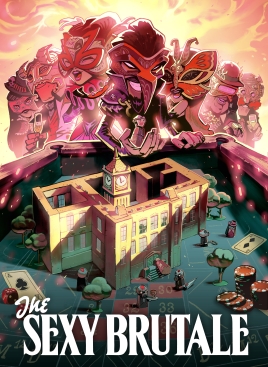 There’s a chance that a lot of you may have trouble getting past the surface of this game based on the title alone. After all, The Sexy Brutale may sound like a highly mockable name to some, but to others, it probably brings to mind the titles of classic crime stories and films of the ’30s and ’40s, those with dimly-lit bars, femme fatales hiding secrets, smoke-filled alleys, et cetera. The Sexy Brutale is indeed a mystery taking the form of a semi-isometric adventure game that tasks you with figuring out what’s behind a series of elaborate deaths in the same vein as those classics. Of course, it’s also one that involves living a single day over and over, Groundhog Day-style, as you prevent each death with the help of a watch that can reset time, all while evading people decked out in playing card gas masks and having you receive advice from a blood-caked woman. So you know, there are some differences.

The Sexy Brutale sees you playing as Lafcadio Boone, an elderly preacher trapped in the titular mansion/casino/resort run by the enigmatic Marquis, who has invited nine guests to spend a rollicking evening in his extravagant estate. But something is off this time around, as several of the guests have noticed something off (such as a particularly creepier than usual staff), and are now skulking about to see what’s going on. But things didn’t end well for any of them, and now they’re doomed to live the day over and over again, facing a brutal end each time. But when a mysterious bloody woman comes to Boone with a busted pocket watch and tells them that may may indeed now have the power to save everyone, Boone realizes they may just have a chance to set things right, and so they have to do their own skulking now in order to view each eerie event and see how it can lead to a proper exit.

So in a way, The Sexy Brutale is a game about detective work, as it’s largely a game about observation and deduction, although mixed with a bit of stealth and espionage. You snoop around the mansion, trailing guests as they move through each room, heading right behind them and peeping through keyholes. Doing so reveals conversations that bring up various nuggets of information concerning their motives, actions, and necessary secrets concerning the mansion, notable interactions between them and important objects, or even just good old-fashioned secret passages. Then after you reset the day, you put all of that information to good use, going around and interacting with all the props and items needed (which do reset along with the beginning of each day) in order to prevent some grisly fates. 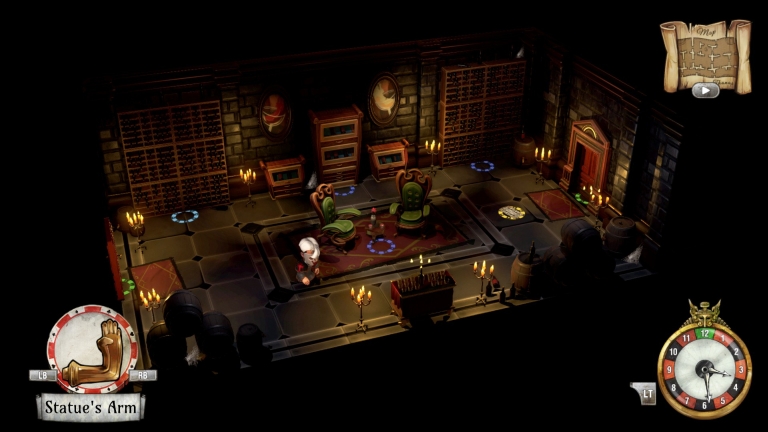 And if you’re wondering why you can’t just leap in and warn each guest about what’s to come, that’s because Boone’s own mask carries a curse that causes the masks of others to chase after and torture him as everything freezes and turns a hellish red until he leaves the room. This means having to move around carefully and pay attention to your mask, because if it lights on fire, that means either the room you’re about to enter has someone in it, or someone is heading your way. Thankfully, moving about is quite easy thanks to a solid control scheme, and interacting with various objects and cycling through your inventory is easy-peasy, as is holding down a button for a Detective Vision-esque mechanic showing certain nearby movements. It’s a simple, basic gameplay setup, and one that works perfectly for this kind of game.

Boone’s mask, however, isn’t the only one he’ll have access to, as the masks of certain rescued guests offer up special powers to assist Boone in his task. They range the gamut from hyper-enhanced hearing that allows you to detect certain codes and whispers to vocals that can shatter glass to reveal certain hidden areas to lockpicking skills, which…well, are rather self-explanatory. Again, they control quite easily, given proper prompts when needed, and give you the means to search for little treasures (which we’ll get to). They are mostly used for advancing to the next area and playing a key role in solving the next murder, though, but are overall fun to use. 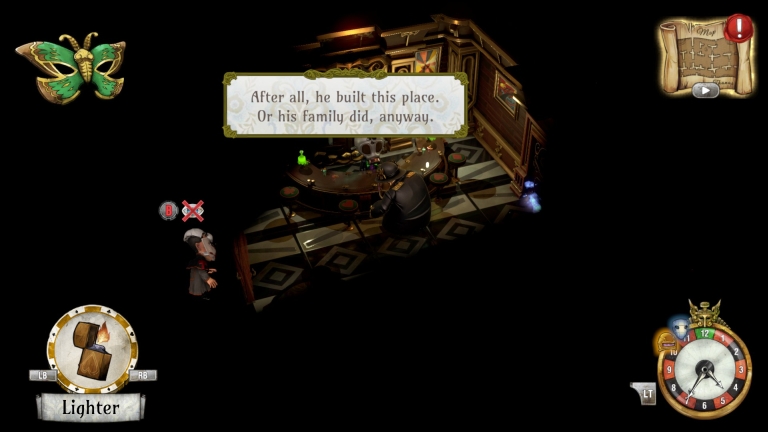 It sounds bit predictable at first, but the puzzles to have to solve for each death are set up perfectly, most having solutions that seem simple in hindsight (like slipping an empty shell into a gun to be used as a murder weapon) but that nicely require you to put in a proper amount of exploration before you can piece every bit together. The next-to-last one being a particular highlight, requiring the use of secret passages, eavesdropping at just the right time, and having to set your respawn point at a clock via your watch in just the right area so you can rig a few props in the nick of time, all while having to maneuver around doors locked by ghostly presences. Just some beautiful, challenging stuff overall.

Oh, the ghostly presences, right. Without trying to spoil anything, The Sexy Brutale does indeed dabble in the occult more than any previously mentioned elements may suggest, which leads to more fun and unique twists in the puzzles, especially as you advance even further. It also leads to a highly addictive story as you ponder just what exactly is going on, what the motive behind all this carnage is, what exactly is going on with the Marquis and his staff, and how you fit into everything. The end result is a surreal, haunting delight (with at least one twist guaranteed to make you go “Whaaaaa…?” in the good way) with a likable and colorful cast and amazing, pulpy dialogue that’s equal parts haunting, humorous, and even tragic all throughout, hitting every emotional note possible and resulting in an astounding, mesmerizing yarn. 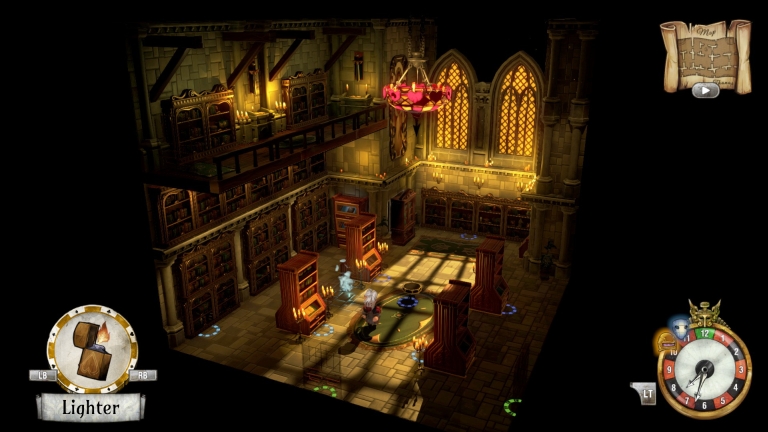 And it helps that The Sexy Brutale knocks ’em dead in the presentation area as well. The mansion’s various rooms each have their own unique charms, all as colorful as the masks befitting each guest’s personality, and have a huge amount of detail poured into making each area feel elegant and eerie (especially as the lighting changes as time passes), with ornate statues, creepy paintings, and decked-out bookcases that could all serve an integral part in either taking or saving a life. It’s a palace-like behemoth with character flowing through every hallway, not to mention some amazing, jazzy music (especially the title theme), that can easily find itself stuck in your head for days to come, which combined with the visuals, definitely helps provide an old-school, noir-esque vibe, albeit one spiked with one part Vegas resort and one part Haunted mansion ride. Bonus points for the audio cues that play all throughout the day as things play out – gunshots, bells ringing, slots whirring – all at specific times, and all mostly working in sync with the background tunes. It should be noted that there are also a few graphical glitches on occasion (assuming that wasn’t my PC), but nothing that gets in the way.

The Sexy Brutale also has its fair share of secrets to hunt for, thus extending the game’s length by a hefty amount. Among those include invitations that detail more about the guests and their backgrounds, information on each room in the mansion and history surrounding it, a full deck of fifty-two cards that leads to a rather interesting path (if you can find it), and even some other secrets that we still have yet to find. But while playing cards are pretty easy to find as you go along (though not without challenge) and the invitations can be found by searching the victims or where they’ve been, unlocking the stories of each room seems to be a bit random. Sure, you get a power later on that helps you find them by standing in certain places, but even then, a few seemed to get unlocked without rhyme or reason. 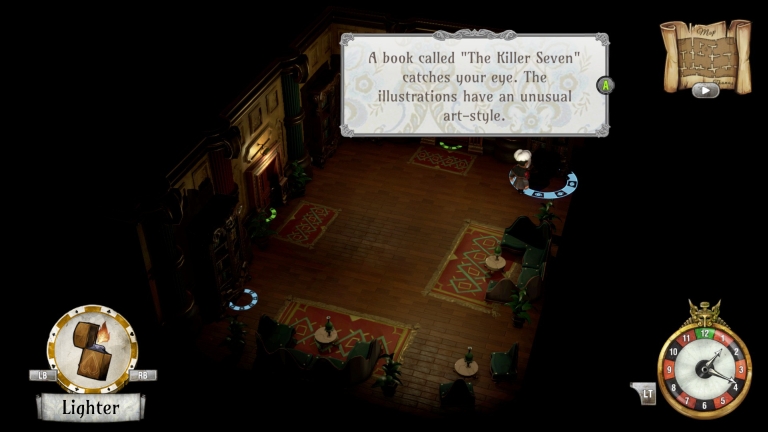 In the end, The Sexy Brutale is a marvelous and unique delight of a murder mystery, one you’ll have walked away from feeling shocked over what exactly you just saw play out in the story, satisfied over the challenging puzzles you’ll have solved to help out each masked guest, and dazzled over the vibrant and mesmerizing aesthetics. Well, I say you’ll have walked away from it, but there’s still a good chance you’ll still go back if you feel you may have missed any secrets those luxurious and deadly walls may have held. Cavalier Studios have crafted one of this year’s most refreshing adventure games that is absolutely to die for.