There’s nothing more nerve-wracking in entertainment than having to follow a tough act, and that goes for the gaming world just as much as other mediums. Once you’ve delivered one smash hit, the pressure is on you to deliver another, and more eyes are upon you. So here we are with Michigan-based developer Finji, who just happened to have a near-phenomenon earlier this year with a little indie game called Night in the Woods. So what’s next for them? Attempting to put a unique spin on the survival genre with Overland, a journey across a post-apocalyptic America where bizarre killer monsters now roam the land. So is it possible for Finji to breathe some more life into the world of survival? If what we have so far is any indication, it looks like they might just be able to indeed. 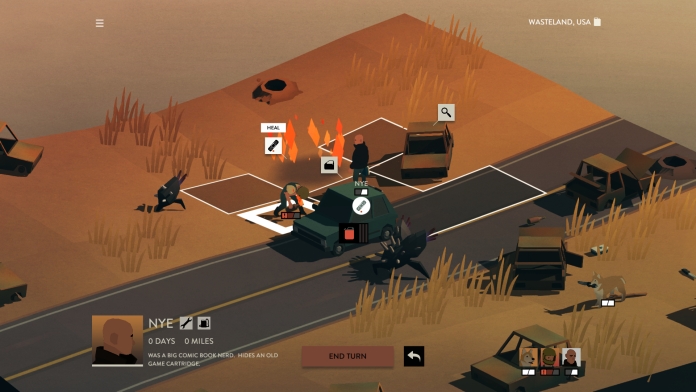 So Overland is turn-based survival game that sees you journeying across the country in attempt to find safety from the various swarms of subterranean-esque monsters. You control a small group of survivors as they each take their turns, moving them across an isometric grid with a limited amount of actions they can perform. Now, comparisons to other turn-based games such as the XCOM titles may immediately spring to mind upon first sight, but Overland has its ways of standing out. For one, each map and the encounters within are randomly generated, creating a unique challenge with each stop as you travel along, making sure you’re always kept on your toes.

Adding to its uniqueness, Overland is more akin to XCOM meets The Oregon Trail (or The Organ Trail, if you want something closer in subject matter). You begin by fueling up your car, then after clearing the way if needed, drive off the current screen and head to a quick map of the current stretch of America. From here, you select the next route you want to take from one of two choices, detailing what the area is likely to contain and what the risk level is. After making your choice and getting out, you begin searching for resources, mainly weapons, medicine, and most important, gas to keep your car going. The longer you stay, the more noise you make that attracts monsters, so you had best hurry. 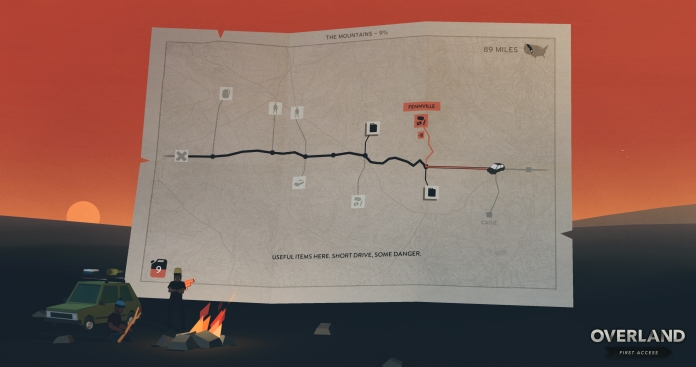 It’s a bit of a standard survival setup, but Overland still manages to be quite fun and challenging. It helps that the strategy element means having to be aware of certain moves like having to actually fuel of the car and start it, which use up your actions. You can also pick new party members in need of aid along the way, but how many you can actually carry depends on the size of your vehicle, so you may want to shop around for a bigger one. You also have to keep a proper eye on your fuel, as each stretch of road uses up a certain amount. Find yourself out of gas, and you’re stuck in the middle of nowhere in a dark area, desperately trying to find a way out while monsters begin to swarm around you. Suddenly, that riskier area may be worth scrounging around in if it keeps you alive in the long run.

When written down, it may not seem like Overland really revitalizes the survival genre a whole lot, but I guess this is just something you have to actually play for yourself. It really is one of those games while the sum of its parts makes an even greater whole, and that’s not even getting into parts not mentioned such as the unique monster designs and eye-catching graphics. You can grab the First Access version through itch.io via the game’s official site, so feel free to take a look for yourself if interested. It may very well lead to another classic night in the woods again after all.