Mortal Kombat was one of the most controversial games of the ’90s. It was one of the many tournament fighter games that popped up after the immense success and popularity of Street Fighter II, but Mortal Kombat had some elements that set it apart from the many other obvious Street Fighter klones at the time. Mortal Kombat featured digitized graphics where the kombatants looked like real people, and since blood and gore wasn’t really kommon in that era the dismemberment and bloodshed brought a great deal of attention to this new IP. This was a era when the evils of society were no longer blamed on heavy metal, and the scapegoat du jour was gangsta rap and video games like Night Trap and Mortal Kombat.

While the initial popularity came from the novelty of being able to reenact the ripping the heart out of the chest scene from Indiana Jones and the Temple of Doom, the game play was solid enough to sustain the popularity after the shock value appeal wore off and therefore the arcade was ported to home konsoles. The port was handled in a couple of different ways to attempt to appease the more puritan minded konsumers, but the main konsoles of the time, Sega Genesis and SNES, were both censored.

The censorship of the Genesis version was actually pretty forgivable. The Sega console was advertised as being the edgier counterpart to the family centered Nintendo system, and to keep that reputation intact they had a way to bring the komplete arcade experience home. Starting up the game on its own presented a sanitized version of Mortal Kombat, but by entering ABACABB in a screen the Kode of Honor screen all the blood and fatalities are back where they belong. Incidentally, the English rock band Genesis has an album named Abacab, and it has long been my theory that this kode is a reference to that album, as a bit of a play on the fact the kode is unique to the Genesis. 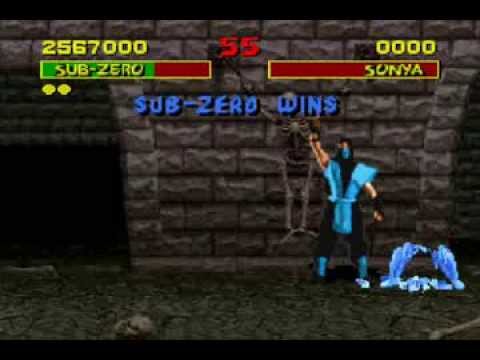 Ripping off her head is bad, but freezing her and shattering her so that only her frozen feet remain intact is fine.

The SNES may be in my opinion the preferable system, but their handling of making Mortal Kombat more kid friendly was  handled poorly. The censorship done to the Genesis version is not even worth discussing since the secret kode to turn the gore back on was kept secret about as well as the Konami kode, but no such kode existed for the SNES version. All the blood was turned into sweat, which is actually a bit grosser and the gorier fatalities were altered. Punching someone in the face and having a gallon of blood fly out of their head was more komical than offensive just because of how ridiculous and unrealistic it was. Mortal Kombat was kriticized for realistic violence, but the term realistic is a bit of a poor choice since no one has 30 gallons of blood in their bodies to lose from being punched and no one is going to punch someone hard enough to make their head fly off. The violence in Mortal Kombat may have featured realistic looking character models but the violence was still at the level of ridiculousness one would see in a cartoon. Pools of sweat kollecting on the ground is just gross, and also a safety hazard for the kombatants.

The fatality censorship is a flaw for two reasons. The first is I hate censorship, if I want to bring Mortal Kombat home I want the experience that is presented in the arcade. The SNES version of Mortal Kombat is the equivalent of buying the network television broadcast edit of an R-rated movie, who in the world would want to purchase that? The second reason it is a flaw is just how moronic the censoring is. Sonya, Scorpion, and Liu Kang’s “finishing moves” remain untouched. Liu Kang does a cartwheel followed by an uppercut while Scorpion and Sonya incinerate their opponent leaving only the skeleton behind, which is a pretty terrible way to die. The other changes were Johnny Cage no longer knocks the head off his opponent, he sticks his foot through their chest. Raiden doesn’t blow up his opponent’s head with electricity, he electrocutes them until they are reduced to a skull over a pile of dust. Sub-Zero no longer separates head and spine from the body, he deep freezes his opponent and shatters them into countless pieces. Kano still looks like he’s sticking the hand in their chest, there is just no visible heart, making his finishing move just really lame. The other three altered fatalities are just as gruesome, the victim’s are just as dead, but because there is no blood and visible body part separation, they are considered more appropriate for younger audiences. 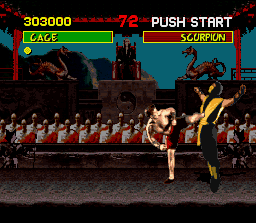 Can’t have the kids see him lose his head, sticking his foot through his chest is so much less violent. It’s fine because there is no blood.

Nintendo learned their lesson from this foolishness since the Genesis version of the game was much more popular at the time. Subsequently, Nintendo figured out their ridiculous kontent standards may maintain a family friendly image for their brand it could potentially hurt their profitability. Next year Mortal Kombat II came home, and the sequel brought the uncensored bloody experience to both konsoles.

Kurious about what other games we love but have an element about them we hate? Read about all the other Fatal Flaws here.