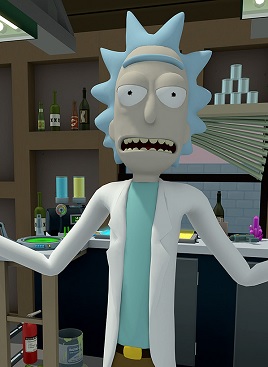 Being unfamiliar with the source material, one can only assume that life is cheap in the world of Rick and Morty. Upon starting Rick and Morty: Virtual Rick-ality, then loading up the game from inside the game, I was informed that I was a Morty clone created entirely to start a load of laundry. Once the soiled clothes were cloistered with soap in the running machine, I was summarily executed and answering a ringing phone in Purgatory, only to be brought back because there were other things to get done in the duo’s garage.

For those looking for much more of a plot, or maybe an extended episode of the show, this isn’t going to fit the bill. Pretty much all of the action takes place in the garage as Rick calls in requests for various tasks to be completed. It will be up to the player to recharge batteries using the most inefficient machine possible, repair a computer that Rick corrupted with nobody wants to know what, feed a thing that lives in a hole under a hatch in the garage, and more. Everything is done using the expected hand mechanics, with pulling the triggers allowing for gripping. While most of the travel is done through teleporting, the portal wall requires physically stepping through to enter a different area. That point of travel does have a neat effect when both environments pretty much exist at once. I really tried hard to break that through irresponsible play. It didn’t work. Probably because the destination is invariably tiny in size.

Considering that this licensed virtual reality title was created by Owlchemy Labs, the studio behind Job Simulator, one could probably guess the contents of the game itself. Much like their previous game, Virtual Rick-ality takes heavy advantage of the capabilities that only VR can offer. It’s not so much about the trick of feeling like the player is occupying a space in the game. Instead, what this game has to offer can only be accomplished by the ability to turn, pick up objects directly, kneeling, and so on. Also like Job Simulator, this is a title that excels at making tasks that would seem mundane in the real world fun in VR, if only because it renders the ordinary ridiculous. Even something as simple as unscrewing some bolts to remove a panel becomes entertaining when the removed screws are tossed out into the cold depths of space. 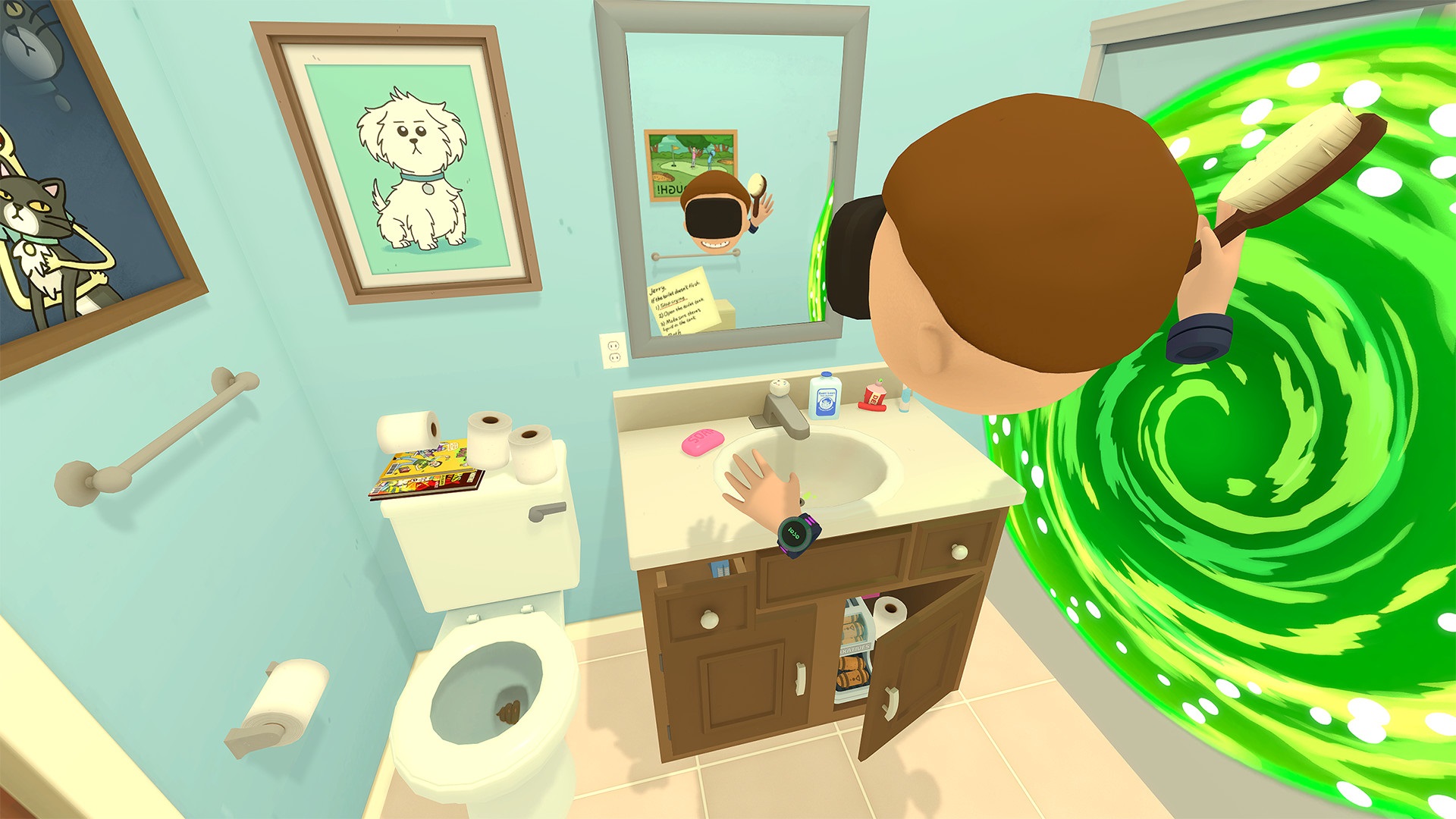 As much as it pains me to spoil even one puzzle of this short game, an example should be given. There is a sequence where the player is forced to repair the engine of Rick’s saucer like vehicle. There are a few components involved to complete this task, as everything was busted. One step is refilling it with nitro, an extremely volatile substance. The player can only teleport between three locations in the garage, and teleporting it causes the canister with the fuel to explode. So does throwing it. Instead, the player must toss a robot that duplicates the player’s movement next to the fuel regenerator, pick it up using the robots mirrored moves, and carefully hand the container to themselves. An exceedingly clever moment, it could not have been accomplished using the Wii’s motion controls, Kinect, or any of the other player input gimmicks that have popped up in gaming over the years. The experience is simply filled with fun, clever, but simple little puzzles like this.

Despite the quality of the actual play, Virtual Rick-ality displays the same issue that so many other decent VR titles experience; it’s too damn short. The garage is littered with all sorts of items from the show to play with, but that pretty much makes up the extent of extra content once the actual game wraps up. It’s entertaining, even for someone who isn’t familiar with the cartoon, but it would be nice to have more full experiences that take more than an hour or two to complete in full. 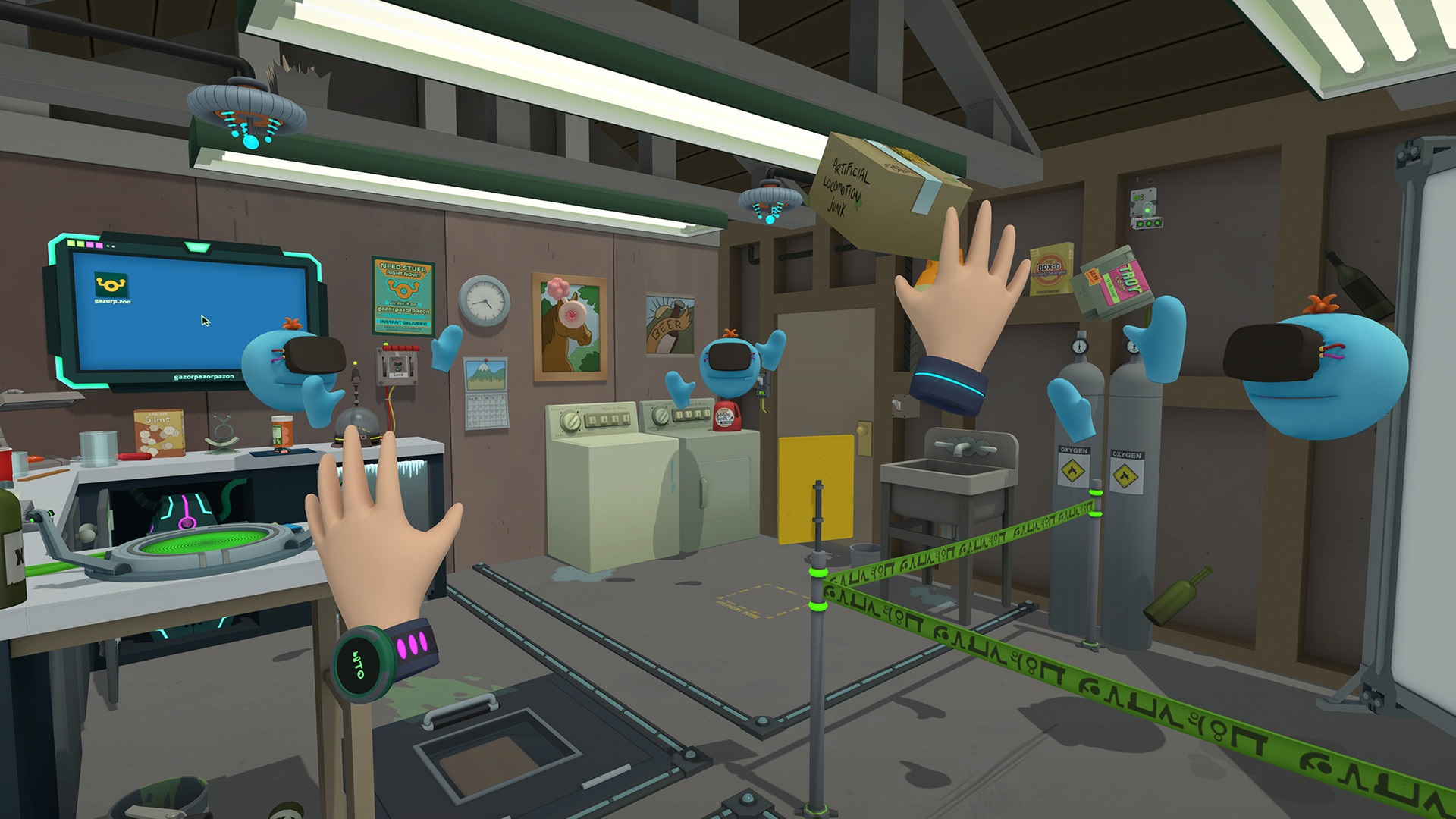 The length issue really does hold back Rick and Morty: Virtual Rick-ality. The time spent in game accomplishes exactly what it should: it’s entertaining with plenty of funny moments. Being so short, however, gives the final product an air of disposability. There aren’t any reasons to revisit the game when it’s done, except to goof around with random things in the garage and maybe slap Rick around again. The actual contents of this offering deserves recognition; there just needs to be more. Nothing is more frustrating than getting into a groove with something only for it to end before it feels finis….